Aether Revolt is a small set. I am most interested in more Energy cards and more build-around artifacts. 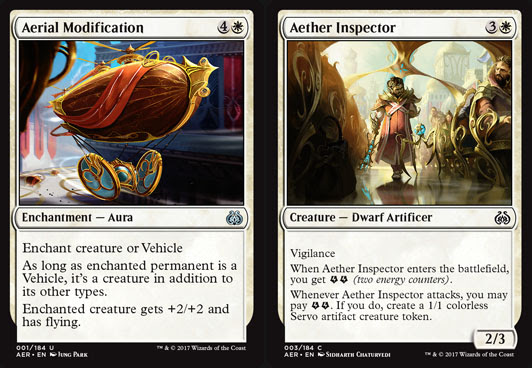 Aerial Modification: It would have been amazing at a lower casting cost just because it would have saved you all that tapping to activate vehicles. As it is, it comes in mid to late game. This card is a missed opportunity for Vehicles to become a Modern deck.
Aether Inspector: Solid in Limited. With Displace (Eldritch Moon), you can bring it back again to get two more Energy out of it. 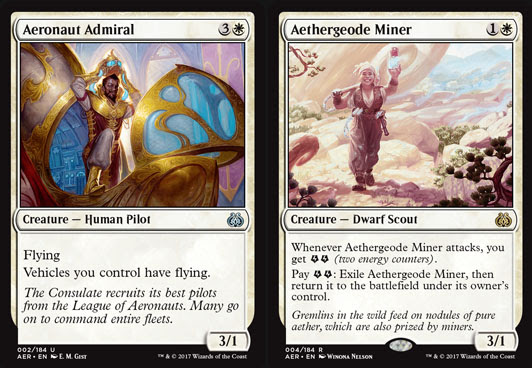 Aeronaut Admiral: Mid game effect is good for an uncommon. Another effect that would have been much more impactful at a lower casting cost.
Aethergeode Miner: For two Energy, you can keep it safe after a board wipe attempt, or even a target destruction attempt, which does make up for the low toughness. This will be a great card to satisfy the 'left the battlefield' clause on other cards in this set. This is the chase white non-legendary rare of this set. If only there was a way to enchant it and make it unblockable with a card like Aqueous Form from Theros. 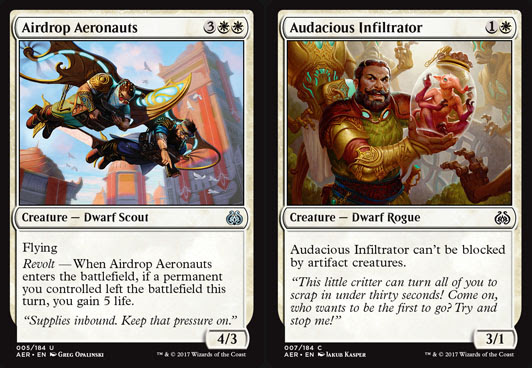 Airdrop Aeronauts: Reasonable in battlecruiser. Flying shouldn't be such a bonus in White and on an uncommon-by this I mean that it could have been a 5 drop 5/4 or 4/5 at uncommon. If you flickered Aethergeode Miner, you had a permanent leave the battlefield.
Audacious Infiltrator: Should be great in Limited. Any card with evasion from artifacts in an artifact block is great in Limited. I am six cards in and three of them are 3/1s. 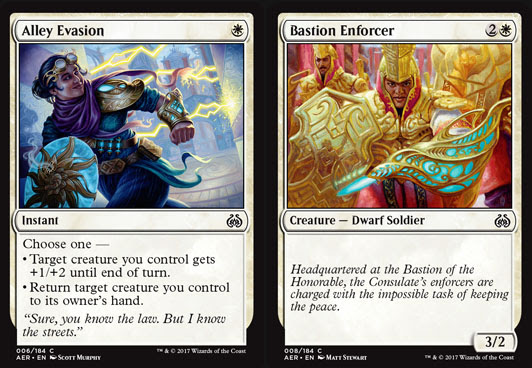 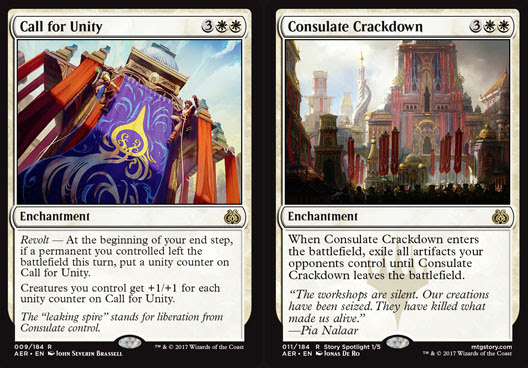 Call for Unity: It reads great, but it is still a 5-drop that cannot on its own win games. I think this card is a junk rare. Compare with Cathar's Crusade from Avacyn Restored, another 5-drop junk rare ("Whenever a creature enters the battlefield under your control, put a +1/+1 counter on each creature you control.")
Consulate Crackdown: While all those artifacts are temporarily exiled, you could use Devoid cards for effect. It can be a great come-back play when you are down against a field of artifacts and about to lose. 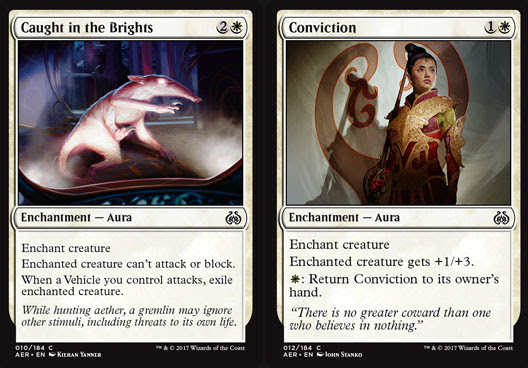 Caught in the Brights: One more mana than Pacifism. It's a solid play when you are playing Vehicles in Limited.
Conviction: Gives one of your creatures a fat butt. I like it. It should be great in Limited, and you can pick it up for one mana if that creature is destroyed. 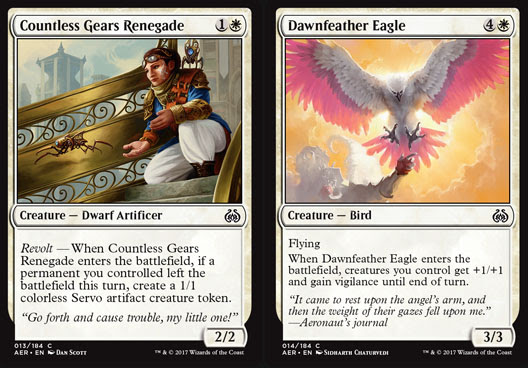 Countless Gears Renegade: A solid common. You can play it after combat and you get the token.
Dawnfeather Eagle: Another solid common in Limited. 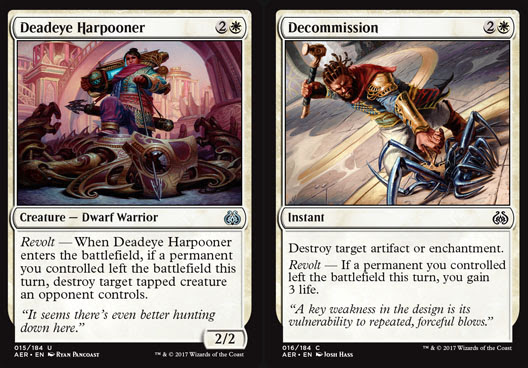 Deadeye Harpooner: Now we are talking. I like the combo. First, flicker one of your critters, then play this during post-combat, and destroy one of your opponent's creatures. Wait... it gets better. If you can flicker it twice, you can destroy two creatures. Solid, very solid. I want to play this card. Displace is still in Standard.
Decommission: Limited. Small life gain that is not part of an overall strategy is a wasted use of resources. 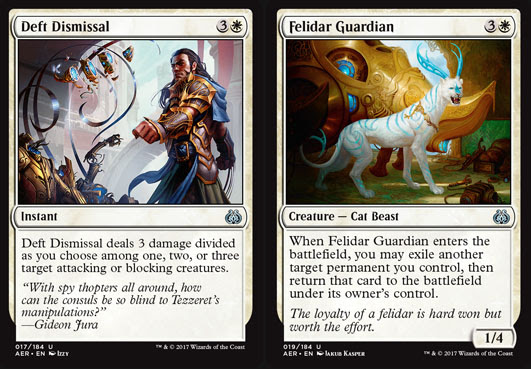 Deft Dismissal: It reads like a red card that costs more mana than it should. It reads like a common.
Felidar Guardian: Flicker help. That's great. At four mana, it will get a lot less use than if it was a two mana creature, even if it was, say, 0/2. 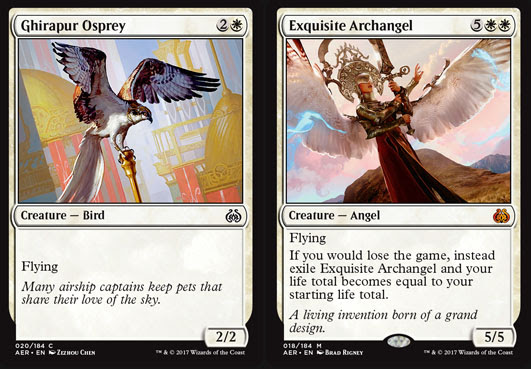 Ghirapur Osprey: solid common in Limited.
Exquisite Archangel: great effect. It does read Mythic, even if it will likely be one of the cheaper Mythics. The Commander players will be very happy with this card. 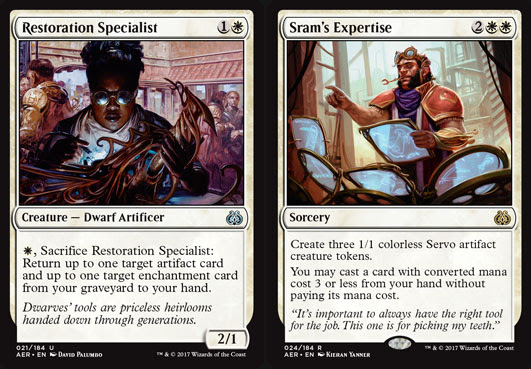 Restoration Specialist: very, very nice. There are so many great artifacts and enchantments that could be returned in all formats. This is a great uncommon, a great card, period. Something needs to drop a bunch of cards in my graveyard fast, and then for three mana, I can, effectively draw two of those cards. I want to play it bad.
Sram's Expertise: Much better in other formats. In battlecruiser standard there aren't any truly broken and still legal cards to free-cast with this. It's "a card." That card can be anything! It can be Liliana of the Veil, it can be Snapcaster Mage. In white-green Modern with mana dorks, you can cast it turn three and drop something busted for free. Sweet! 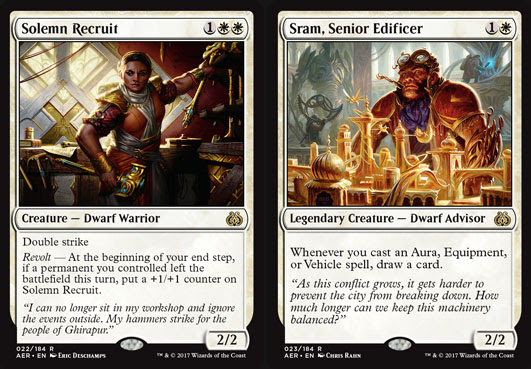 Solemn Recruit: Dwarfs is already a fun deck. Nice addition. You can cast it and not do anything with it until it grows. There are enough flicker effects in this set to get this to be a double-strike 4/4 in two turns. Solid in battlecruiser Standard. I am not so sure this card is as strong in Modern.
Sram, Senior Edificer: It reads legendary. It had me at "draw a card." It will be very strong in Standard Constructed. Remember, we are building up to 8-set Standard. This card will get better and better with every set that gets added this year. 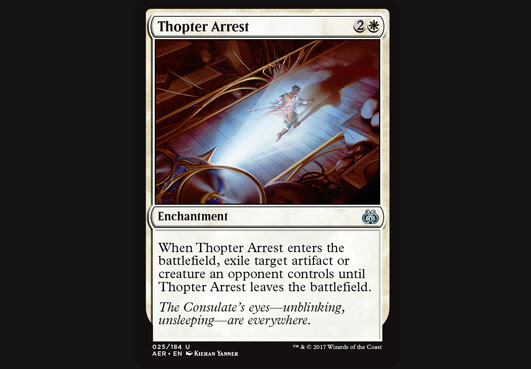