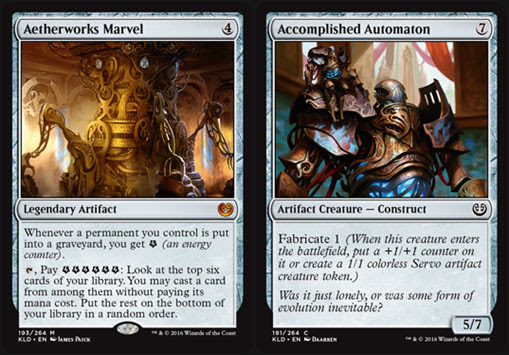 Aetheroworks Marvel: Compare with Quicksilver Amulet, a 4 drop rare artifact (Pay 4, tap, You may put a creature card from your hand onto the battlefield.) Here you have to pick from the top six cards of your library. In so many words, it does feel Mythic, but it's a lot of setting up. First you need to have six Energy, either from this 4 drop artifact, or from other sources. You are going to want to have the six Energy already when you cast this. Otherwise, you are waiting forever to get your free cast.
Accomplished Automaton: Limited jank. 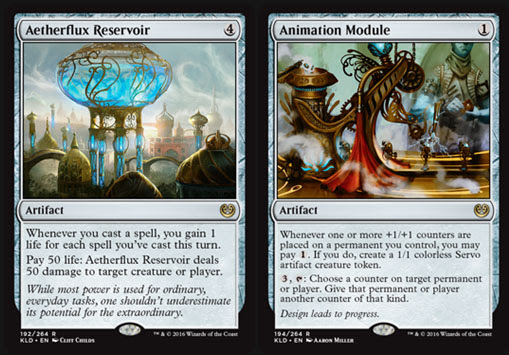 Aetherflux Reservoir: This is a great Johnny rare. I will wait until it falls to junk prices and make my deck build around with it. This is a linear sum: 1+2+3+4+5+....+N. If you cast two spells during the turn, you get 3 life, and if you cast five spells, you get 15 life.
Animation Module: A much stronger Contagion Clasp-like card. (Cost: 2; When Contagion Clasp enters the battlefield, put a -1/-1 counter on target creature; Pay 4, Tap: Proliferate. (You choose any number of permanents and/or players with counters on them, then give each another counter of a kind already there.) I will not be surprised if this is one of the chase rares of the set. It has a very low casting cost, it's a token maker, and it can add counters on any permanent. That's pretty sick, and in a good way. 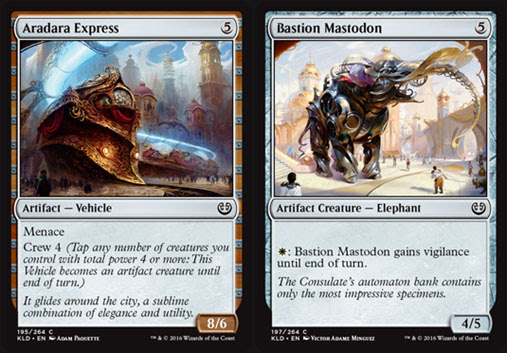 Aradara Express: Let's assume that a crew cost is equivalent to a mana cost since maybe you are tapping a 4 drop 4/4 to crew for 4. This card is effectively a 9 drop 8/6 with Menace. Limited jank. Because vehicles are powered by power and not by toughness or CMC, aggro cards commonly found in Red are the cheapest casts to use as crew cards.
Bastion Mastodon: Limited paired with White mana. These pairings are very important, otherwise every deck will drift to the best artifacts and it won't matter what manabase you are using. That's not good. Cards like this one are very important inclusions in an artifacts-matter set/block. Limited jank. 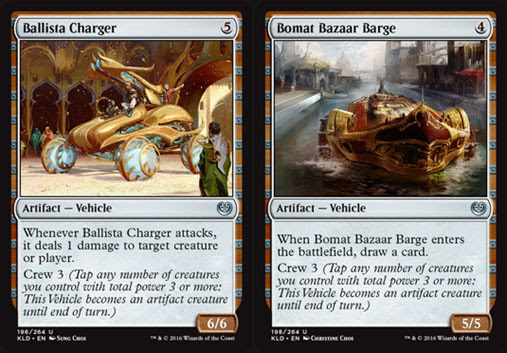 Ballista Charger: an 8 drop 6/6 that pings for 1 is a Limited uncommon.
Bomat Bazaar Barge: a 7 drop 5/5 that draws you a card as an ETB is a limited uncommon. 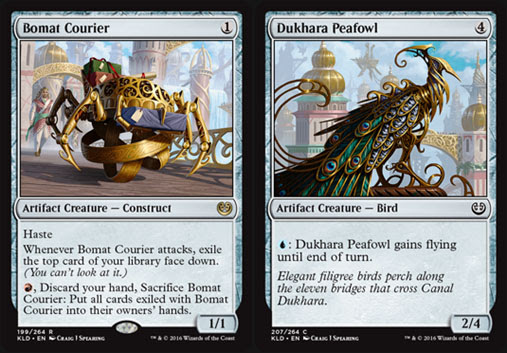 Bomat Courier: Very interesting card. I have to go through it step by step. It's a low drop. It has Haste, and it has a Red activation. If you go first you will hit with it once unblocked. Any additional attacks, you will have to buff it up or it will just sit there. "into their owner's hand" is here for a reason. There are situations when someone takes this card from you. The card is still owned by you. That's complicated. I think this is a junk rare.
Dukhara Peafowl: Limited, and nice Blue inclusion. 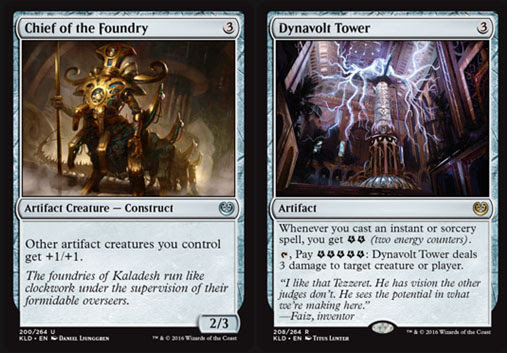 Chief of the Foundry: Nice reprint and downgraded to uncommon. This is just awesome. I love this card. It will end up in many decks while it is in Standard and people are playing artifact decks.
Dynavolt Tower: I see it best in a Blue/Red Instants and Sorceries deck. 5 Energy for a Lightning Bolt. We shall find out how well costed this is. 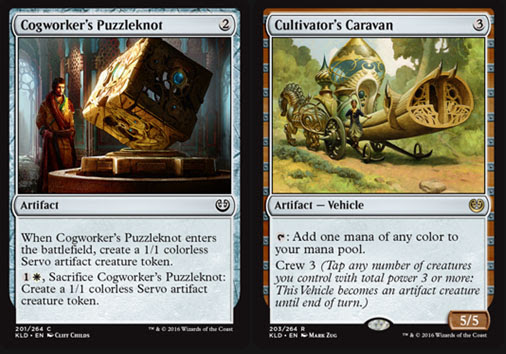 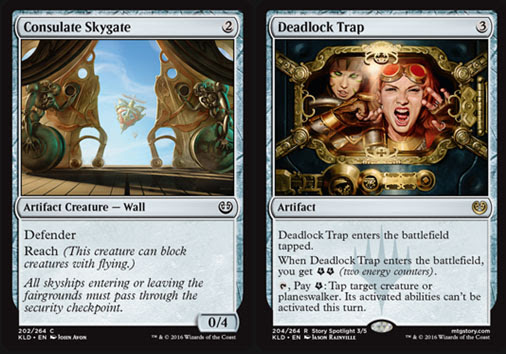 Consulate Skygate: Limited jank.
Deadlock Trap: I will have to see it in play to understand it's power. Tapping a planeswalker means nothing to me. Are a planeswalker's abilities defined as activated abilities? If so, then this is a lockdown card for planeswalker, and that's why we see planeswalkers in the trap. It will definitely work for creatures. Just for that I think it will be an useful rare. If you have two on the board, you can be spending all your Energy tapping two of your opponent's creatures. That can be a really good stall tactic. 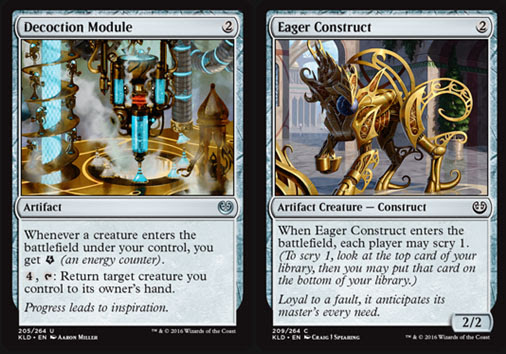 Decoction Module: Pretty good uncommon that can go in any deck that needs Energy. It reads super useful in many decks. The return clause ain't bad either. It can protect a creature if you have 4 mana handy, and it can bounce something you want to recast for an ETB effect.
Eager Construct: Good for the creature count in Limited. 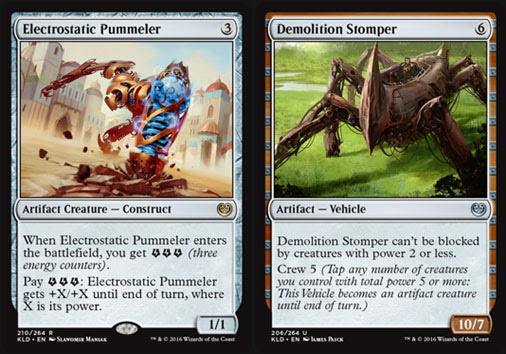 Electrostatic Pummeler: The pay clause means you have to boost the living daylights out of it to profit. It's worth it, but you will be spending Energy until end of turn, and that means this is a junk rare.
Demolition Stomper: 11 drop 10/7 uncommon. It reads Limited. You are playing it on turn 6, crewing it on turn 7. That is way too late, unless almost every card in your deck is a counterspell and/or some time of target damage card. 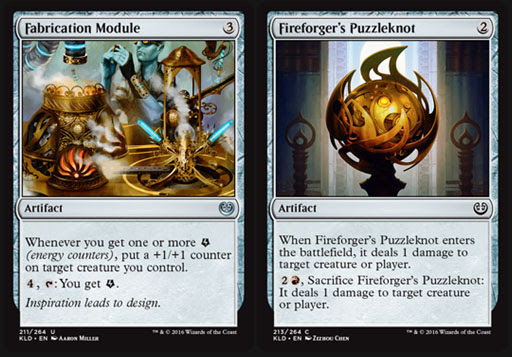 Fabrication Module: Solid uncommon. It's an auto-include in the 'all of my creatures need counters on them' deck.
Fireforger's Puzzleknot: Limited dinger. 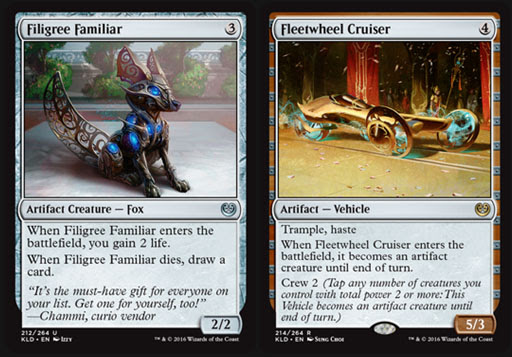 Filigree Familiar: OK uncommon. It does give you a card when it dies.
Fleetwheel Cruiser: 6 drop 5/3 later but 4 drop 5/3 when it enters the battlefield. This card could have a similar utility to the Dash cards. If you make sure you remove all of your opponent's creatures, the first time it enters, you are scoring a 5 life hit for 4 mana. Reads solid.
Posted by Rubiera