I saw some good Johnny cards in White and Blue. 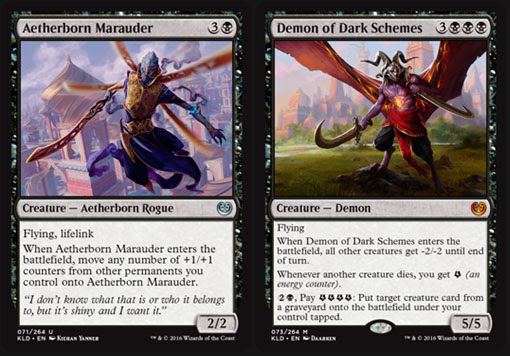 Aetherborn Marauder: If it had been a 3 drop it would have been insanely good. At 4 mana, it's a solid uncommon. There are many ways to have a bunch of counters on critters in Green. This reads like a great Green/Black card.
Demon of Dark Schemes: Could have used a better title. Something like Flamboyantly Lame Demon (just kidding!) The ETB effect is solid since you at least clear away any low power threats and as a bonus you can gain a ton of energy. You can even play another card that wipes for -2/-2 and also get a ton of energy. The reanimation clause is the one I like the most. I also like the black devotion. For what reads like a battlecruiser Mythic, I am intrigued and I want to play it a lot. 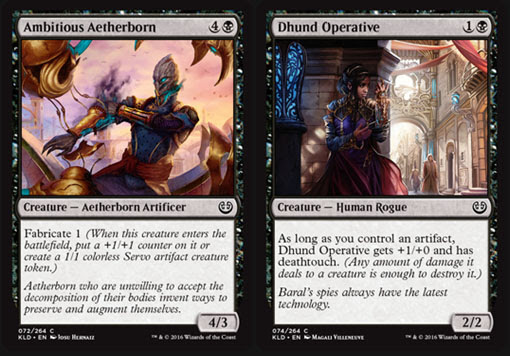 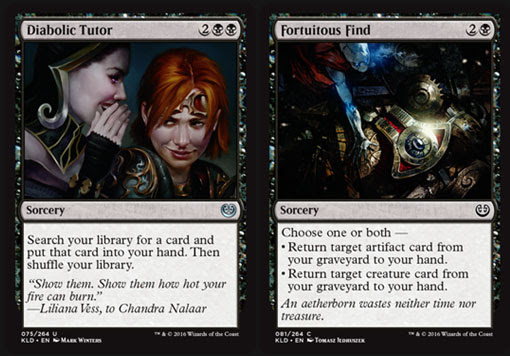 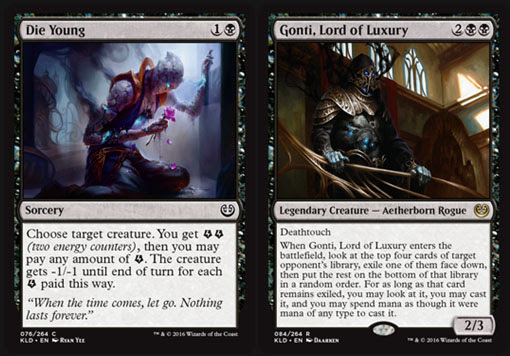 Die Young: An early way to get some Energy and then you can choose to use it. I like the versatility, I am just not seeing Energy as this great resource yet.
Gonti, Lord of Luxury: A fun card. I see it as a junk rare, but it is still a fun card. I really want to play it. It's low enough in the curve that you can use it multiple times. It can be disruptive. Maybe it won't be a junk rare.... 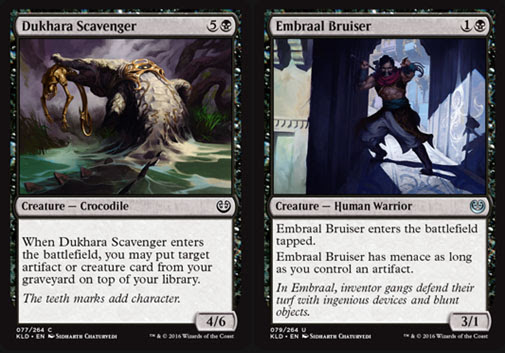 Dukhara Scavenger: Limited, and useful there.
Embraal Bruiser: Solid uncommon. You are likely going to control an artifact in this Standard. 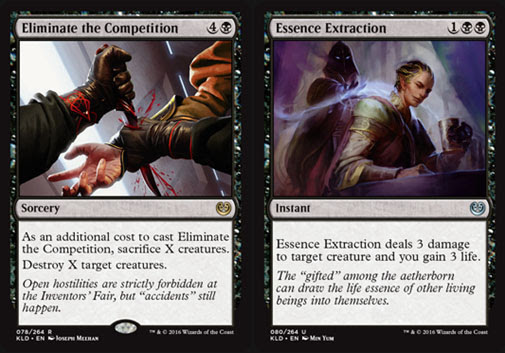 Eliminate the Competition: It reads like a good rare for Standard only, and then a Johnny rare in Modern. I would put it into my Blood Artist deck and have a lot of fun.
Essence Extraction: Heavy cost for the damage it deals, and gaining life is usually a game-losing strategy. Reads like a limited uncommon. 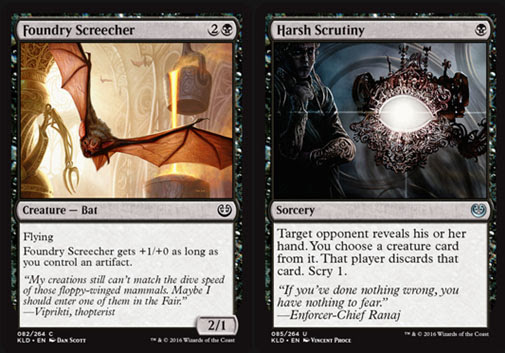 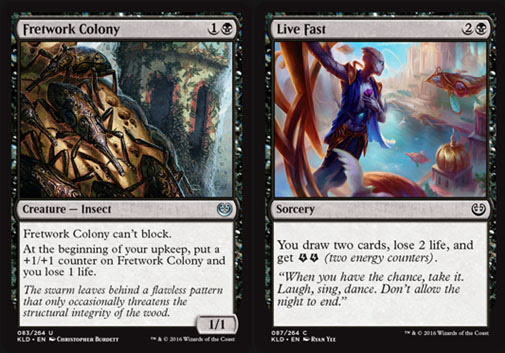 Fretwork Colony: I like it a lot. I would protect it, and keep it running for a few turns. I would also figure a way to drop counters on it in Green/Black.
Live Fast: Very nice flavor with Die Young. One more mana over Sign in Blood for the Energy gain. Let's see if that matters. 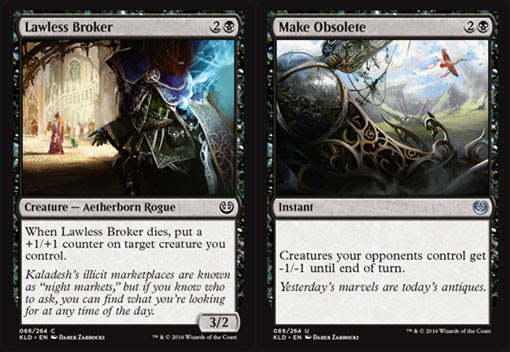 Lawless Broker: Limited, and useful there.
Make Obsolete: Limited battle trick. I am surprised this is not a common. 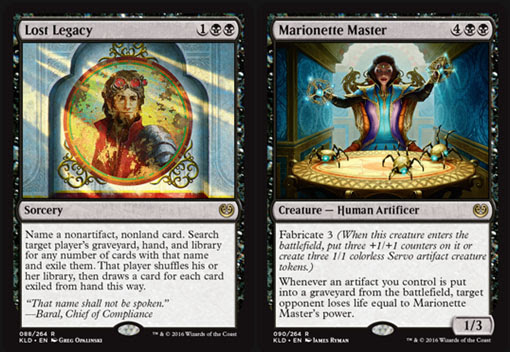 Lost Legacy: It's solid. You let your opponent draw as many cards as you take out, and that means you really need to know what you are looking for. You need to cripple your opponent's deck with your selection. This card works best when you know what's in your opponent's deck ahead of time.
Marionette Master: Because EDH. You need to enchant buff it to make the 'loses life' clause useful. You can go really wide with Fabricate 3, and that's nice. It's still a junk rare. 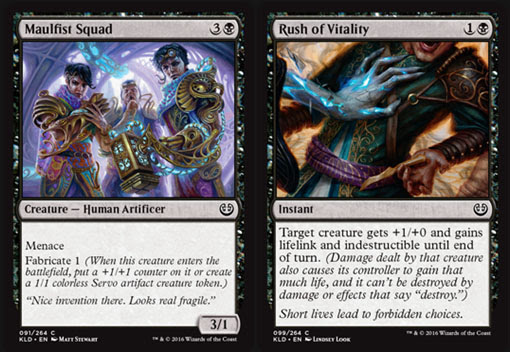 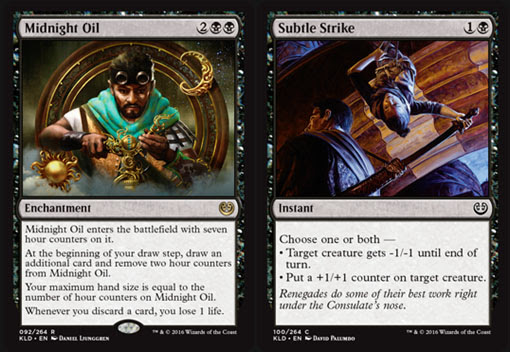 Midnight Oil: In the tradition of Demonic Pact. At some point, you want to bounce it back to your hand or even destroy it to make sure you don't hose your yourself with the hand size restriction.
Subtle Strike: Useful in not just Limited. Some decks really need an easy way to place counters on creatures, especially at instant speed. 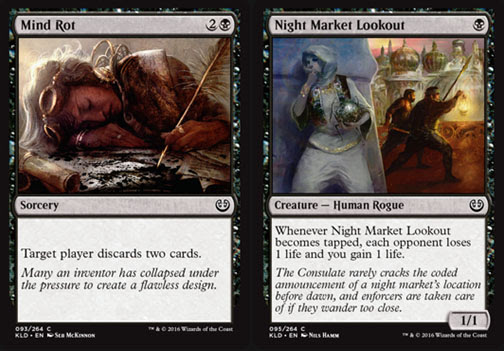 Mind Rot: Classic reprint. The Return to Ravnica artwork is the most literal depiction. Always a great card.
Night Market Lookout: I am surprised about such a quality common in a battlecruiser Magic set. I thought the era of great and/or broken commons ended with Treasure Cruise. Now I need to find an enchantment that will make this card better, or a way to tap it without having it attack. 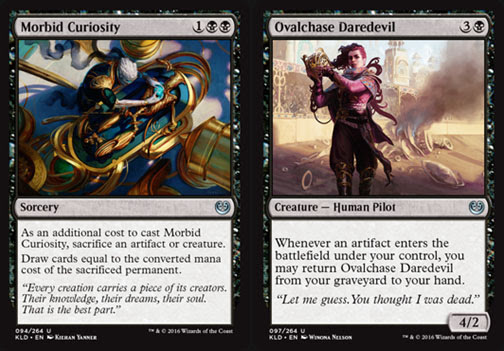 Morbid Curiosity: I really like this card. It has beautiful artwork, and it can be a great card draw engine for all of three mana. I am in.
Ovalchase Daredevil: A nice inclusion in a casual reanimator + artifacts deck. Noxious Gearhulk: A solid effect, yet it does not feel Mythic enough. Compare to one of my favorite cards of all time, Grave Titan (4BB Deathtouch Whenever Grave Titan enters the battlefield or attacks, put two 2/2 black Zombie creature tokens onto the battlefield. 6 / 6). OK, it does have Menace. I get that.
Syndicate Trafficker: A solid rare. Not sure if it will be a money rare. Sacrificing artifacts needs to be combined with a way to get them back and requires the sort of setting up that defines junk rares. 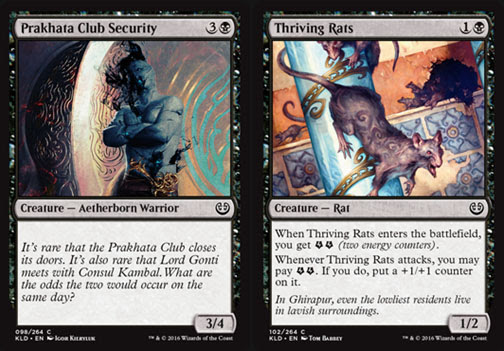 Prakhata Club Security: Limited jank. Awesome art work.
Thriving Rats: More incredibly beautiful art work. In the great tradition of great and fun two-drop rats, such as Ravenous Rats (When Ravenous Rats enters the battlefield, target opponent discards a card.) I am still unsure how useful the Energy economy will be. If it is a good economy, then this card will join Ravenous Rats in usefulness. 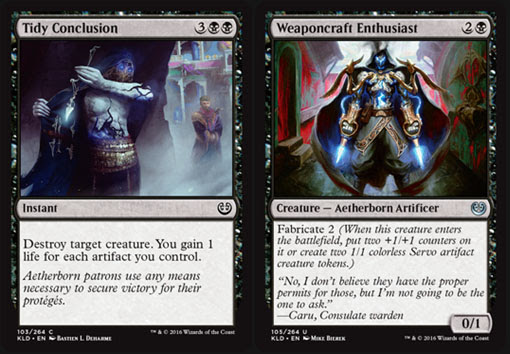 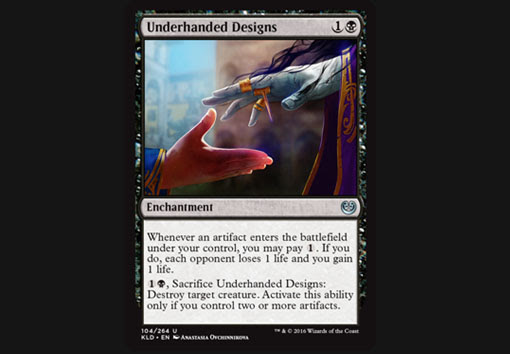 Underhanded Designs: Great card. It's going in my Blood Artist deck in Modern.
Posted by Rubiera