Last part of the review. I have already come across some great Johnny artifacts. 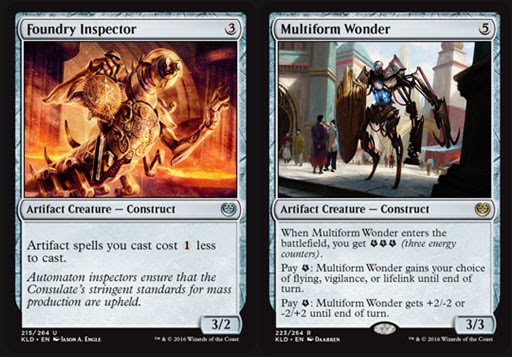 Foundry Inspector: I am playing it, all right. It only helps your artifacts, and that's great. I think this is a must-have in a deck with lots of artifacts, at least in this Standard.
Multiform Wonder: It has it's uses, but if you swing it too much in the aggro direction, it can be very vulnerable as a 5/1. I think it will settle in junk rare territory. 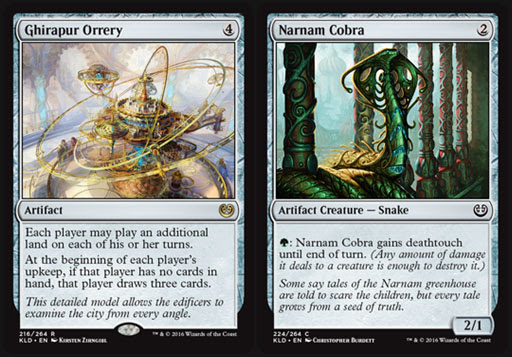 Ghirapur Foundry: A fun card for sure. It lets everyone play more cards, and draw more cards. It requires a lot of creativity in deck building to play it in an asymmetric way, in a way that helps you more than it helps your opponents. I think it will be an affordable card, and if it is, I would like to build around it.
Narnam Cobra: Limited and useful in that format. 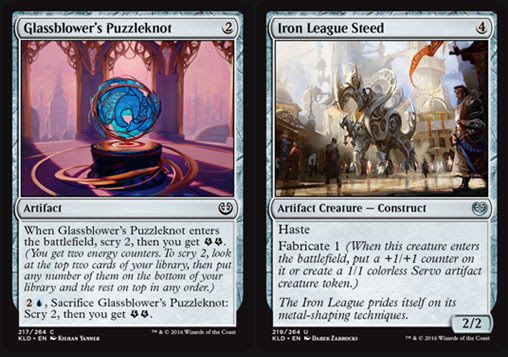 Glassblower's Puzzleknot: 5 mana to Scry 2 twice and to get 4 Energy. It reads like a very useful card, and not just in Limited.
Iron League Steed: Solid uncommon on account of Haste. I would come up with a way to buff it up, and play it in Red just because I can couple it with more creatures with Haste. 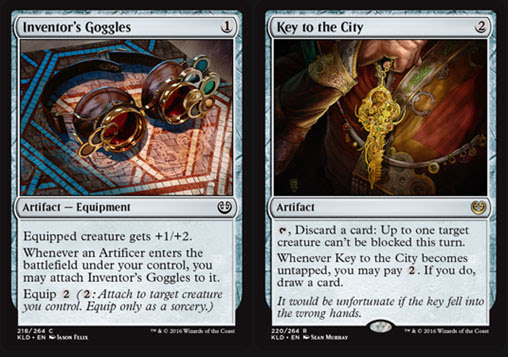 Inventor's Goggles: Similar to Ghostfire Blade (1 drop, Equipped creature gets +2/+2. Equip 3; Ghostfire Blade's equip ability costs 2 less to activate if it targets a colorless creature.)
Key to the City: I like it a lot. I want to discard in Esper Reanimator, and for 2 mana I can get a card. Sign me up. A really fun rare, and it could even be a valuable rare. 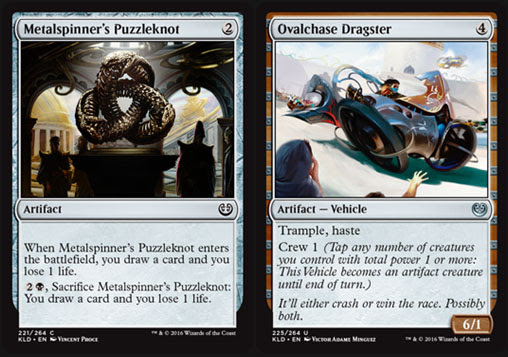 Metalspinner's Puzzleknot: for 5 total mana you draw two cards and you lose 2 life. Seems fair, given that you get the choice of when to play each of the two activations.
Ovalchase Dragster: 5 drop 6/1 with Trample and Haste is a very good uncommon. I have used similar effects before in White/Red decks with great positive results. 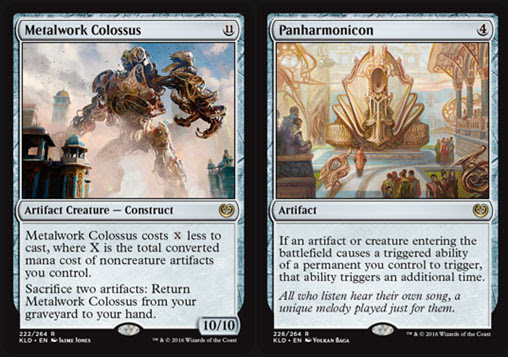 Metalwork Colossus: Very nice. It requires an investment in big artifacts, and it's worth trying. It reads really strong. I don't know the set well enough at this point to determine if it will be a junk rare, or a powerful rare, or something in between.
Panharmonicon: ETB heaven, let's roll. Once again, in isolation it's difficult to evaluate this card. If an ETB deck can be built to be very strong, this artifact will double the ETB bonuses beyond a certain point in the game. That can be really good, even gg-good. 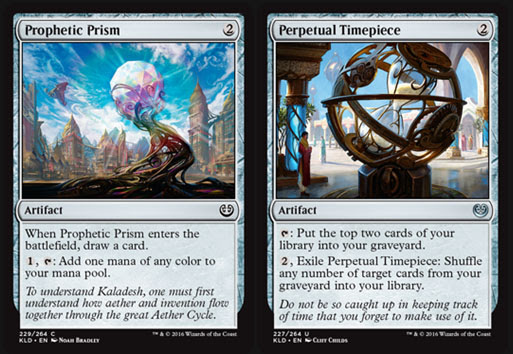 Prophetic Prism: this is a great color fixer, and it's a common? I like it a lot.
Perpetual Timepiece: great self-mill for reanimator and it lets you recover some of the cards you don't need in your graveyard, such as lands and artifacts. Solid is solid. 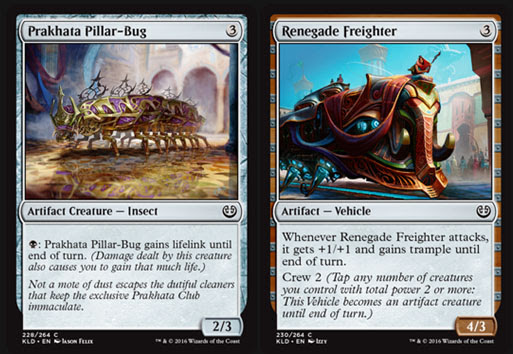 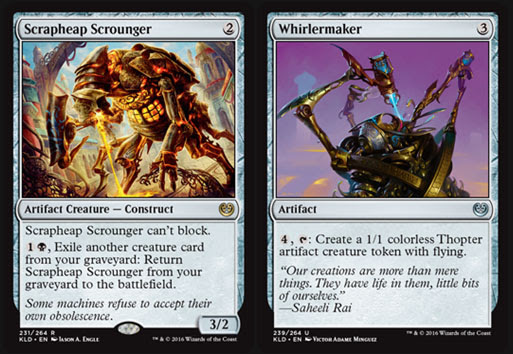 Scrapheap Scrounger: great for Esper reanimator. I am guessing it will not be an expensive rare.
Whirlermaker: That is one insane overcosted casting of a 1/1 token. I have no idea why it costs so much. I think this is a Limited uncommon on first reading. 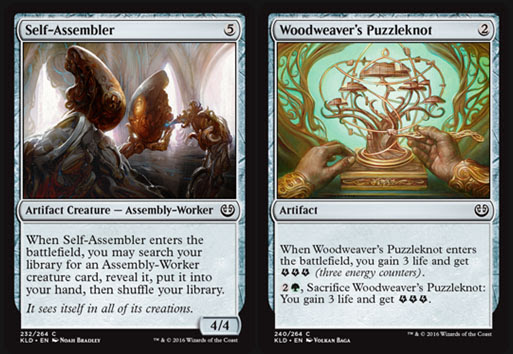 Self-Assembler: I looked in Gatherer, and there is one previous artifact creature of type Assembly-Worker. You want to guess what it's called? It's called Assembly-Worker. Limited jank at first glance.
Woodweaver's Puzzleknot: 5 mana to get 6 Energy counters and gain 6 life. It does have its uses. 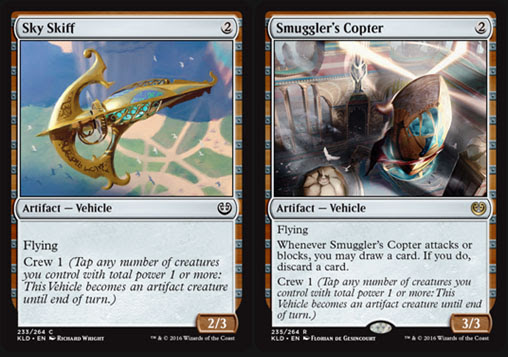 Sky Skiff: 3 mana 2/3 with Flying. Limited jank.
Smuggler's Copter: 3 mana 3/3 Flying and you can draw and then discard when it attacks or blocks. OK, I see it as a junk rare, yet I also see it as very useful in a specific deck, a deck with Cathartic Reunion. 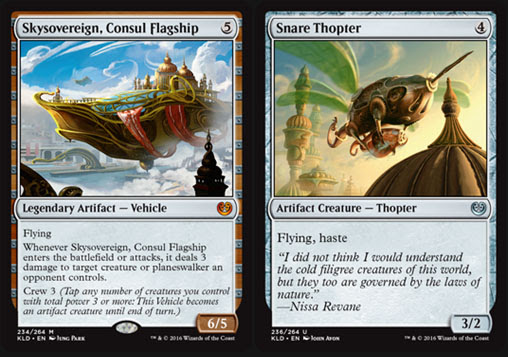 Skysovereign, Consul Flagship: 8 mana 6/5. When it enters the battlefield it is still an artifact. It does feel Mythic that it can come in and cripple a planeswalker. And then it does the same every time it attacks. Yeah, that's a strong effect. What's missing is damage to player, and that means to me that this card will likely not be an expensive Mythic.
Snare Thopter: Limited uncommon. It does have Haste. I love Haste. Oh, and it's a flyer. I like it. Maybe it's more than a Limited uncommon. 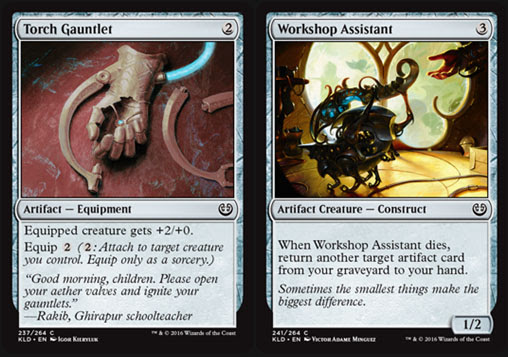 Torch Gauntlet: aggro equipment, most useful in Limited.
Workshop Assistant: good for your Limited creature count. The bonus is nice too. 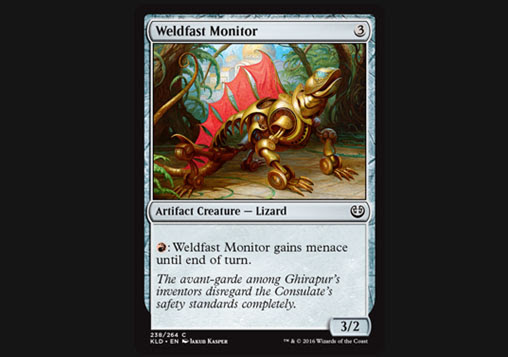 Weldfast Monitor: pretty good for a common. With the Red activation, it is a solid common.
Posted by Rubiera