White was all right. I saw at least one solid build-around Johnny card and a chase rare. 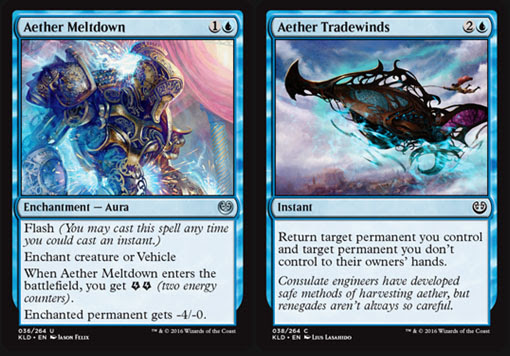 Aether Meltdown: Another Limited uncommon... Versatile card, for sure. It can neutralize a vehicle, it is aggressively costed, and it has Flash. Block card, though.
Aether Tradewinds: Solid Limited trick. Bringing something you own back to your hand can be to your advantage if you design your deck for it. 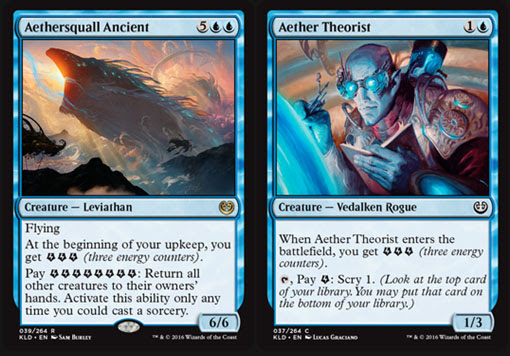 Aethersquall Ancient: Because EDH. Destined to be a junk rare.
Aether Theorist: Versatile, and solid in all formats. It can chump block, let you Scry three times on its own supply, or be an Energy supply for something else. You can even bring it back and cast it again with some other effect for more Energy. 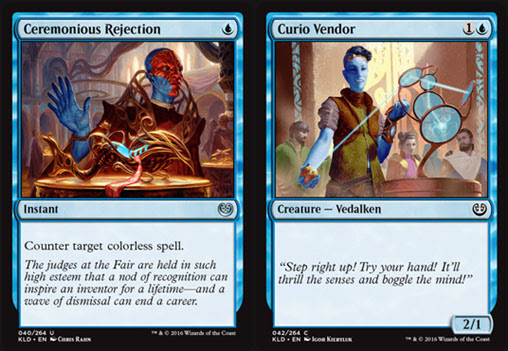 Ceremonious Rejection: Eternal formats will love it. It can be a better Annul (same card, but for artifacts and enchantments) in many situations. Four of these in a sideboard could be great against Tron, Affinity, and lately, Eldrazi.
Curio Vendor:  Limited jank. 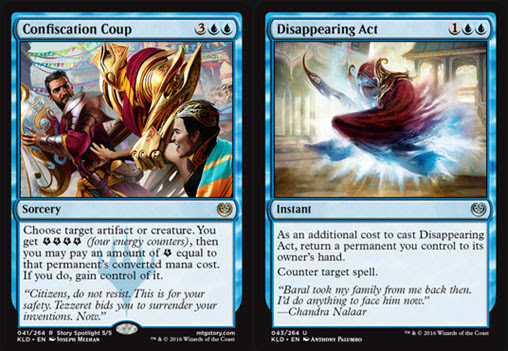 Confiscation Coup: Destined to be a junk rare. The 'I am taking over your card' late game effect is not quite as casual as milling, but it's up there. The Energy gain is very good, though.
Disappearing Act: A great variant of Cancel (same card, just counters target spell). It's an instant, and that's important because you can use it to protect something. It returns a permanent, and that can mean a planeswalker that is about to get destroyed. I like this card a lot lot. 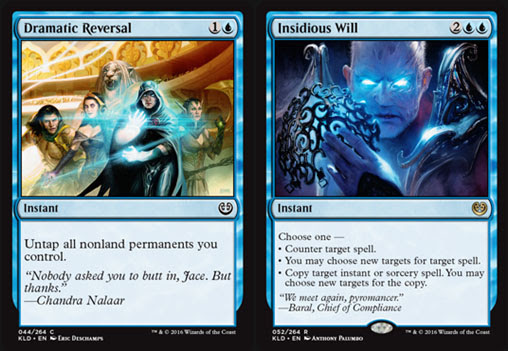 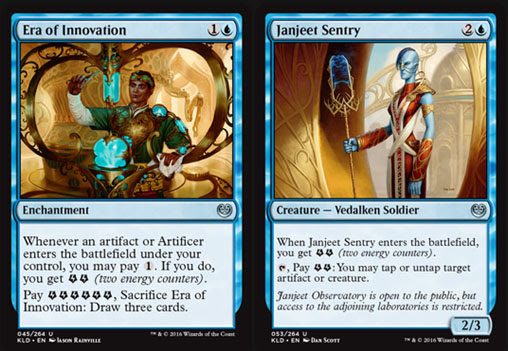 Era of Innovation: A great Energy source at low cost. It reads like one of the better uncommons.
Janjeet Sentry: Reads OK. Tapping to do anything is usually weak, just like gaining life or preventing combat damage without an overall strategy. 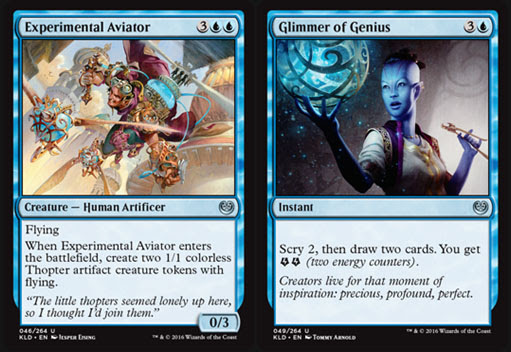 Experimental Aviator: I am missing something here with zero power. It does not grow by itself like the Evolve cards in Gatecrash. Another limited uncommon that you can use to go wide with late game.
Glimmer of Genius: Too late as a four drop. Limited uncommon, and that is not great. More like Glimmer of Usability. The Scry 2 is nice, though. It would have been a much better card if it was a two drop, Scry 1, draw one card. Much better. As a four drop, a lot has happened by the time you get to use it. 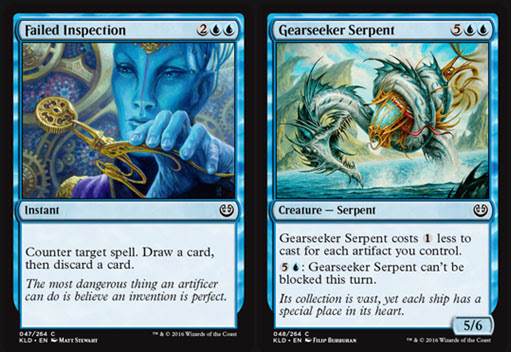 Failed Inspection: Overcosted, but good. I want to play it in something other than Limited, but something tells me that this is just a Limited jank card.
Gearseeker Serpent: An Affinity card. I like that. And it's a common. If it can come in as a two drop, I will be ecstatic playing it. I am really liking this card. 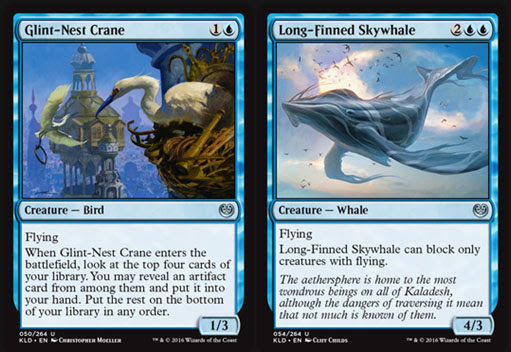 Glint-Nest Crane: Solid card. The Scry 4 then get an artifact clause is great. I want to play this one for sure.
Long-Finned Skywhale: Reads like a Limited uncommon, and that's not great. Most of the time it will be blocking something with Flying anyway. 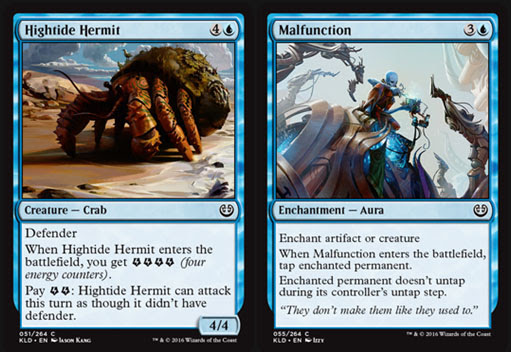 Hightide Hermit: Limited jank. Cards with Defender that lose it with a clause are in their own category of jank. One more card for my junk cube idea.
Malfunction: Limited battlecruiser jank. It would have been just Limited jank if it cost one less mana. 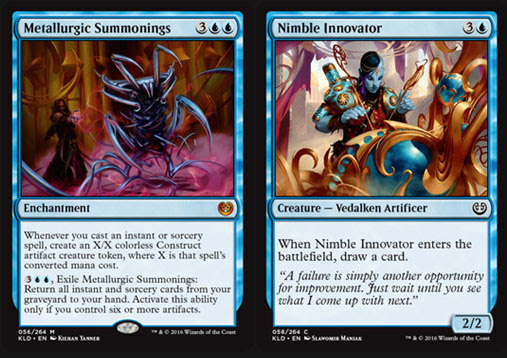 Metallurgic Summonings: Absolutely Mythic. I would build around it with a bunch of counterspells and card draw, maybe add another color, and just go wild after casting it. It will be a great source of annoyance for your opponents since you have to lock them down and then play this. Annoying is annoying.
Nimble Innovator: Very good in limited, where that extra draw makes the most difference. It reads like a really useful card in that format. 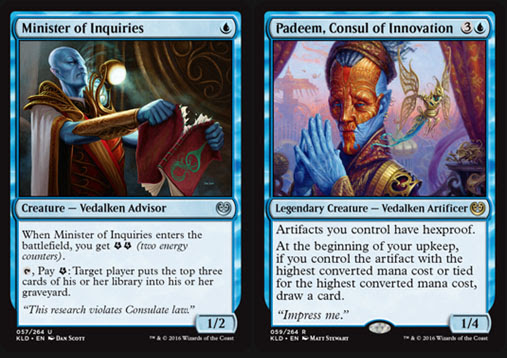 Minister of Inquiries: A so-so milling card, a much better reanimation card where you mill yourself. It enters early, and I like that a lot. I would put it in a reanimator shell in White/Blue/Black (Esper).
Padeem, Consul of Innovation: Great card. I would play it with Green to cast it as soon as possible. If my artifacts have Hexproof early, I can be a real pain and then win. Check out Privileged Position from the original Ravnica {2 W/G W/G W/G (5 total mana), Enchantment, Other permanents you control have hexproof}. 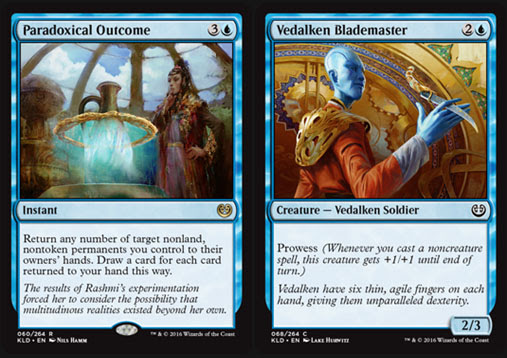 Paradoxical Outcome: I love this card. This is a Johnny junk rare all the way. I must build around it. I would need a boatload of extra mana, or extra Energy, to do a lot with it. It's returning everything except mana, and I can't have any tokens because I will lose them. Ummm.... I need to think about this build-around.
Vedalken Blademaster: Limited. Prowess is great, though. Give us more Prowess cards, please. 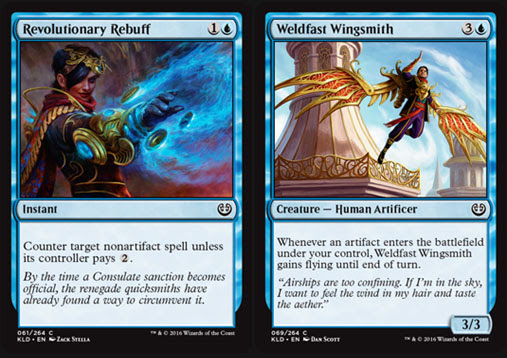 Revolutionary Rebuff: A crippled Mana Leak. Artifacts are in some of the best decks in all formats. Revolutionary Sadness. I don't get this card. Why is it so limiting? And it's in an artifact block with a better Annul (Ceremonius Rejection). A Mana Leak with controller paying 2 would have been better than this card, even if that card would have also been a crippled Mana Leak.
Weldfast Wingsmith: Limited Jank. 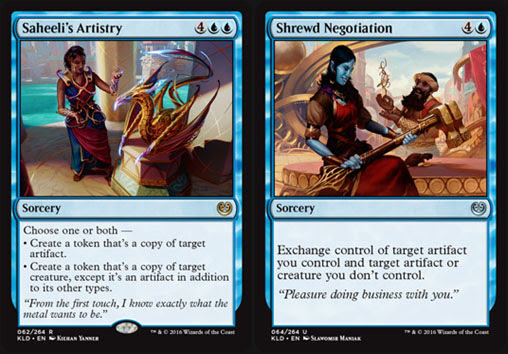 Saheeli's Artistry: Because EDH. Destined to be a junk rare. It's a fun card, though. A Clone for battlecruiser Magic.
Shrewd Negotiation: Great effect, only it costs way too much. At 5 mana, it's a Limited uncommon. At 4 mana it would have been really good. 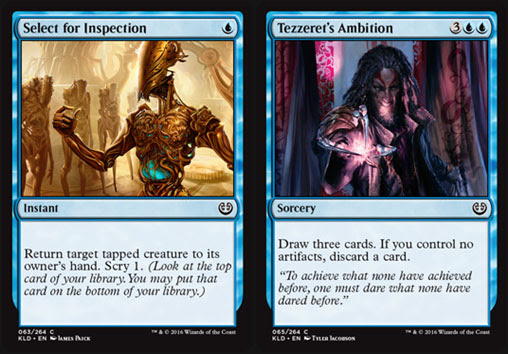 Select for Inspection: Useful in Limited. Battlecruiser version of Vapor Snag.
Texxeret's Ambition: I love this type of card. It's awesome in Limited. Opportunity is even better. 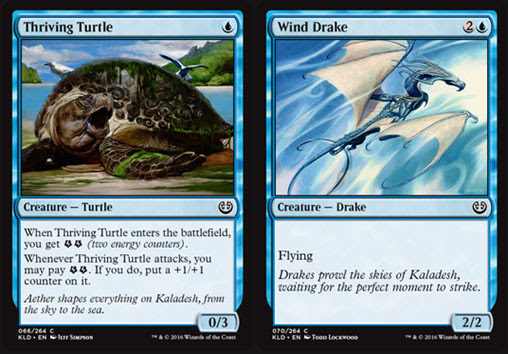 Thriving Turtle: Zero power. Energy continues to read like Cohort.... and that's not that great. I guess I will only know for sure when I build an Energy deck.
Wind Drake: Limited jank. 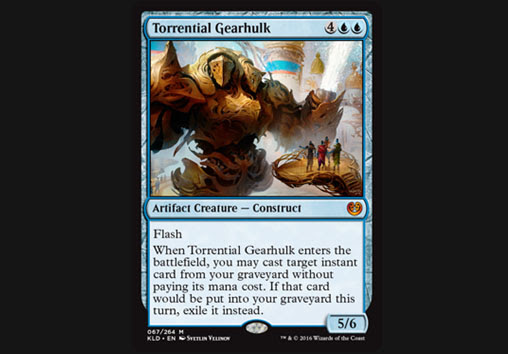 Torrential Gearhulk: I would have preferred Instant OR Sorcery. There aren't many great high mana cost instants. I am not convinced this one is as good as the White Gearhulk. Of course, if you are not paying the mana cost, there are 22 instants in all colors from all eras that cost 7 or more mana. All of the truly epic high mana blue non-creature spells are Sorceries. I would buy it and keep it until some outrageous Mythic Instant comes out in the future.
Posted by Rubiera