We are down to the last selection. The set so far looks like will be complemented well with Theros block, even though I must admit that this set defines a new lower level of power, even below the low power level of Theros block. Also, the Gods seem weak. 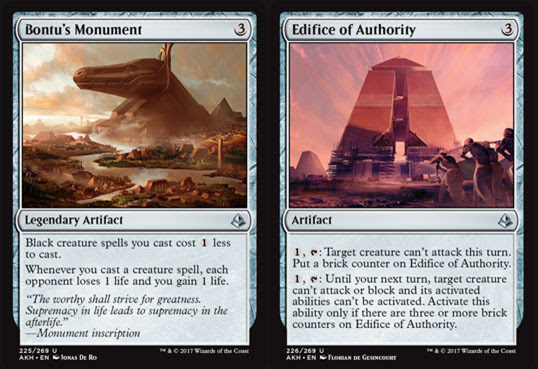 Bontu's Monument: All of the monuments encourage mono-color decks, which is great, and also consistent with the Theros block. This one goes well with Blood Artist. I like it a lot.
Edifice of Authority: Very nice casual lockdown effect. 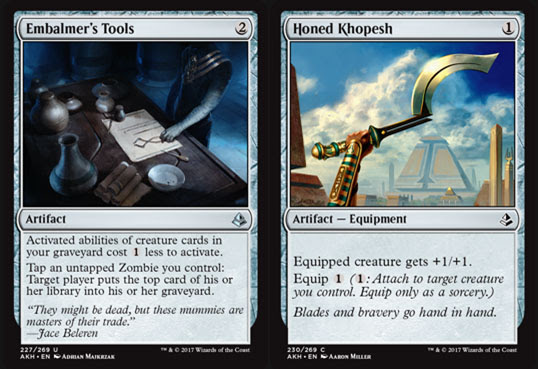 Embalmer's Tools: Great Embalm enabler. I like it a lot. It can be used in ALL decks with a lot of Embalm. The Zombie clause is love at first sight for me.
Honed Khopesh: Solid in casual and Limited play. 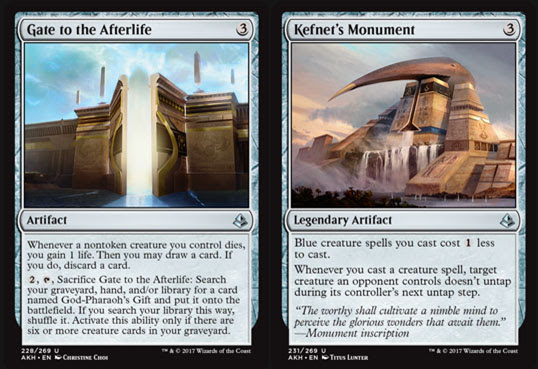 Gate to the Afterlife: I guess God-Pharaoh's Gift is a card in Hour of Devastation. Draw a card, then discard a card works well in a specific deck. Lots of Embalm will do it in this set.
Kefnet's Monument: Not as good an effect as Bontu's Monument because your opponent may not have any creatures, or may only have creatures that are not worth keeping tapped. The spell cost savings, though, is great across the board for all five monuments. 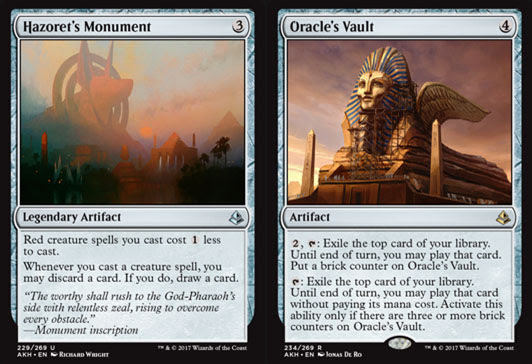 Hazoret's Monument: Very useful (discard/draw) effect to put on an artifact that helps red spells. Do note that you have to discard and then you draw. It is always much better to draw first and discard second.
Oracle's Vault: Great Johnny artifact. I love it and want to play it. Unless you fuel the second effect, the earliest you can use it is turn turn 6 or 7. That's late. 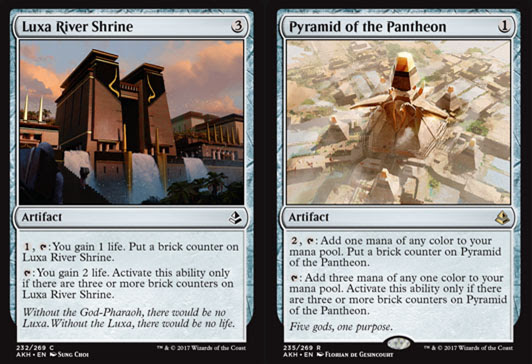 Luxa River Shrine: Yet another trigger for any 'whenever you gain life this happens' triggers. At 3 mana it reads like a Limited card, yet this effect can be very strong in the right deck.
Pyramid of the Pantheon: A solid mana rock, I will take it! 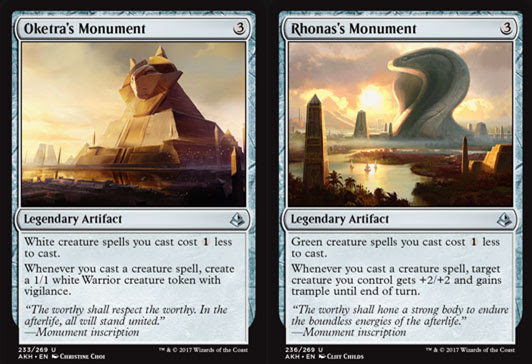 Oketra's Monument: I love the monument cycle. This one is great. Drop a bunch of white weenies and you get a token from each one. I am sold!
Rhona's Monument: The added effect can be useful but +2/+2 on a clogged board can do a lot of nothing. 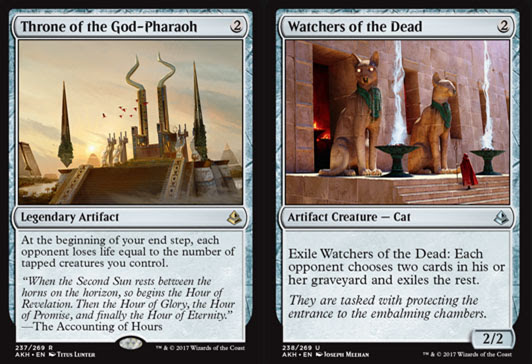 Throne of the God-Pharaoh: That is one sweet clock. I want it! The deck with this would have to be able to drop many creatures and hope the attacks that come in when they are tapped are not fast enough and big enough to outrun this clock. In White/Black or Green/Black, I would drop a slew of creatures and creature tokens and disrupt my opponent with black discard and target destruction spells.
Watchers of the Dead: Useful in a Standard without a card as powerful as Nihil Spellbomb 1 drop Artifact (Tap, Sacrifice Nihil Spellbomb: Exile all cards from target player's graveyard. When Nihil Spellbomb is put into a graveyard from the battlefield, you may pay Black. If you do, draw a card.) 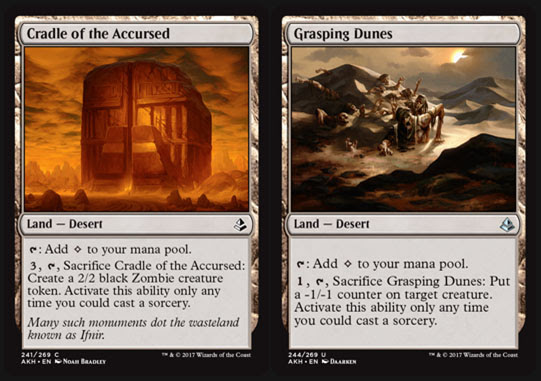 Cradle of the Accursed: definitely good in Limited after you have all the mana you need. I will use it in Constructed, but only with mono-black Zombies.
Grasping Dunes: Same as before. I would only use it in a '-1/-1 counter matter' deck with one or two colors. 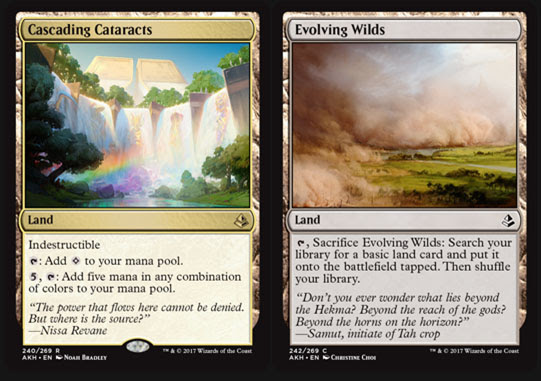 Cascading Cataracts: I like the rainbow effect. It has many uses in all formats. This land reads like a sleeper (a card that seems innocent but can actually be the cornerstone of a strong strategy).
Evolving Wilds: Welcome back, old friend. 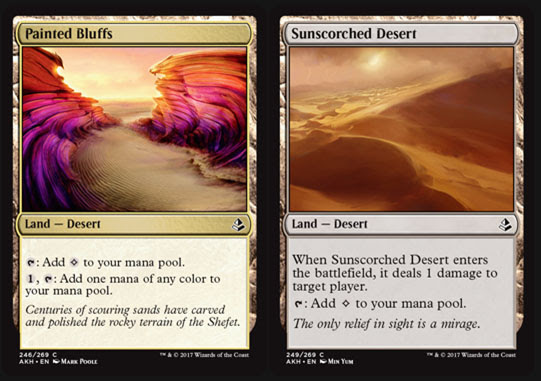 Painted Bluffs: friends with Shimmering Grotto. Great casual land.
Sunscorched Desert: Someday, I would love to win a game with this land!

I include tokens here for the Embalm creatures that have additional text other than an evergreen ability. The token is supposed to be a copy of the card, and it therefore has to copy everything on the card it copies. 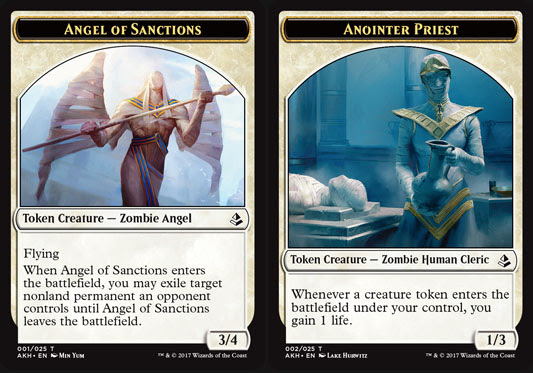 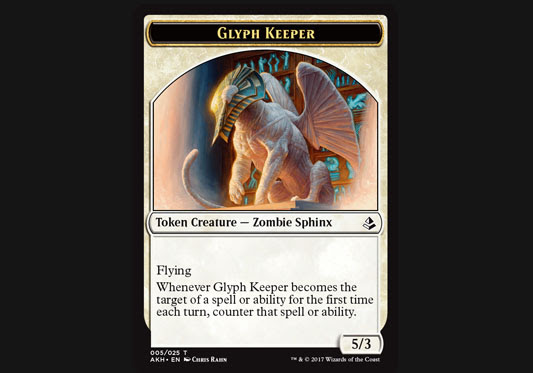 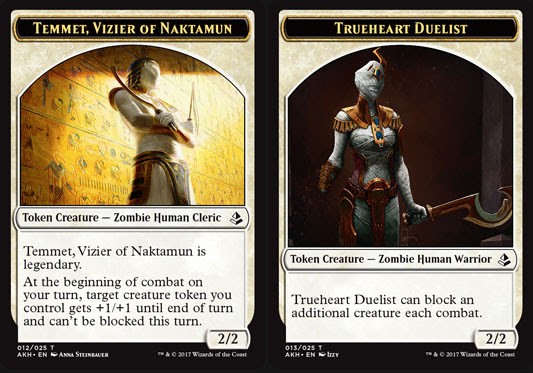 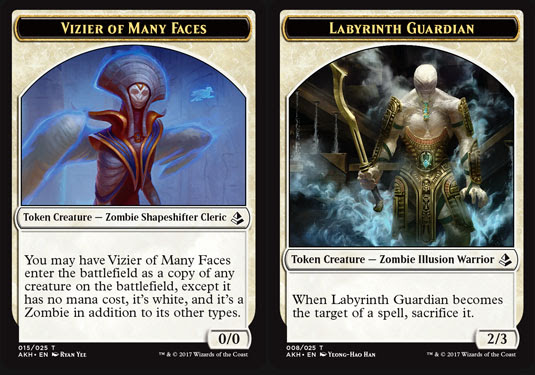 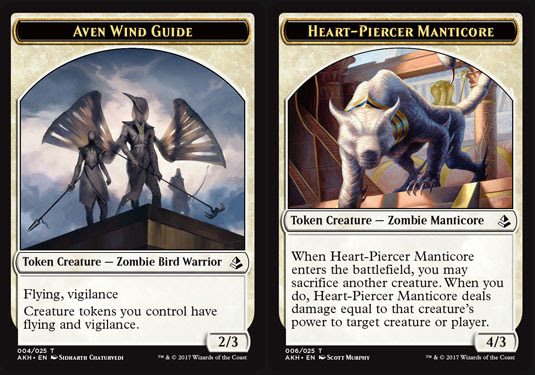