This sets looks like a great complement to Theros block. Let's find out if this is the case. 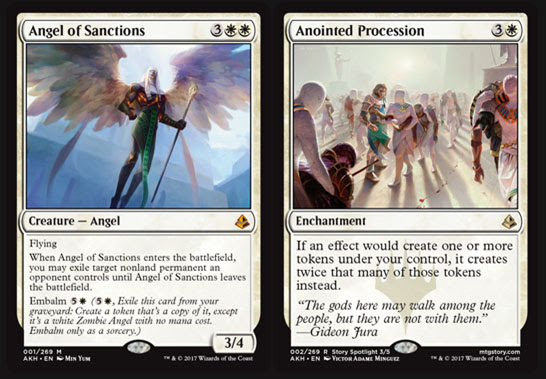 Angel of Sanctions: Underpowered, yet comes in early enough for battlecruiser Standard. You do get a bonus copy thanks to Embalm. It's going to capture a nonland permanent, and that can include a planeswalker. You are probably not going to risk attacking with this.
Anointed Procession: Very strong. There have to be many ways to abuse this doubling effect. An effect can be the Enters-the-Battlefield ability of Blade Splicer. 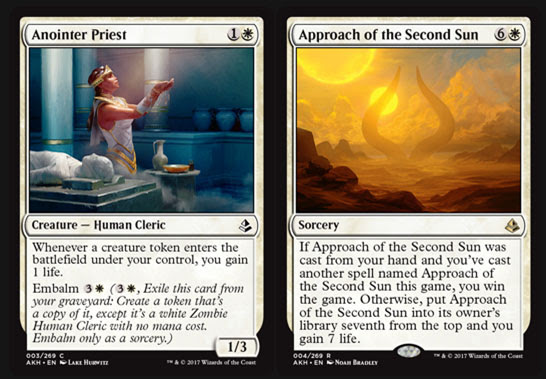 Anointer Priest: Considerably less useful than Soul Warden because a creature token is a creature, but a creature is not a creature token. The Embalm bonus is nice, though.
Approach of the Second Sun: Interesting junk rare. It will make for a very Timmy win. 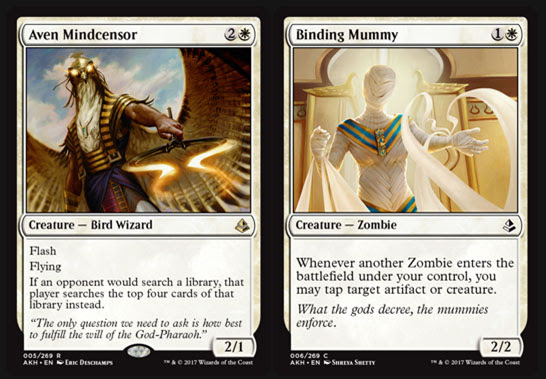 Aven Mindcensor: the Modern staple reprint of the set. Obviously more useful in Modern than in battlecruiser Standard, yet way more annoying in the latter, just as Thoughtseize was when Theros was in Standard.
Binding Mummy: White Zombies are such a great addition to the game! I could devote an entire post just to this addition, and how Esper (White/Blue/Black) Zombies can now be explored as, at least, a fun casual deck. This one seems geared to Limited. 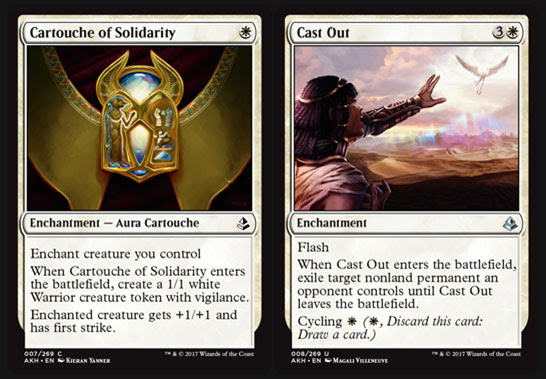 Cartouche of Solidarity: A variation on the cycle of enchant creatures from Theros block. Both effects only happen once, and should be great in Limited.
Cast Out: A little late for the temporary exile effect. The cycling cost is low, though. I see it as late-game very useful and dead in the hand early game, and that's where cycling comes in. 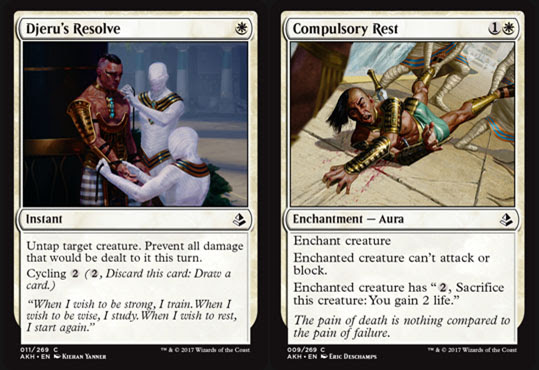 Djeru's Resolve: Limited.
Compulsory Rest: A slightly worse Pacifism. It at least costs the same. The lifegain bonus you ar giving your opponent, the down side, is not that significant. What is significant is that your opponent can send the creature to their graveyard. That can be a down side against a reanimator deck. 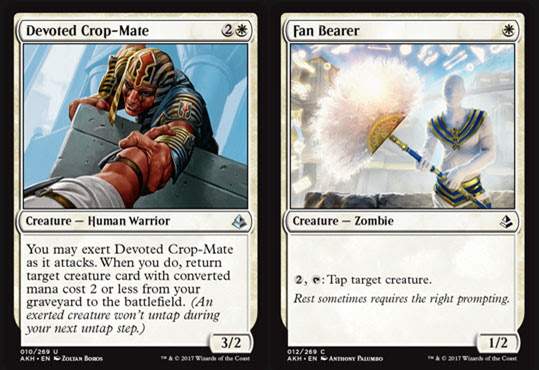 Devoted Crop-Mate: It's like Detain from Return to Ravnica, except you use it on your own creature for a bonus. It reads useful, as much as I hate tapping for anything. That creature better be good!
Fan Bearer: Limited tapper. There are many variations of this card in previous sets, most at 1/1 and costing 1 White mana to tap. 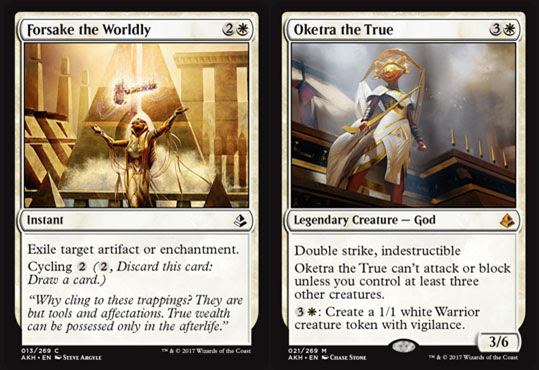 Forsake the Worldly: a battlecruiser version of Legacy's Disenchant, which is this card at 2 mana without Cycling.
Oketra the True: reads like a junk Mythic. It doesn't have Flying and it has a weak attack. It can be a wall in many circumstances. 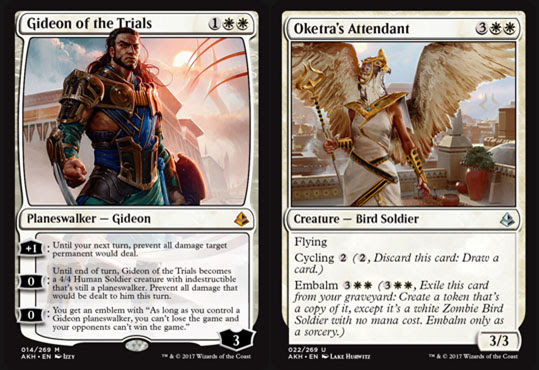 Guideon of the Trials: the money card of the set. It can be easily used for its ultimate, and it's a pesky one. The +1 ability is good if your opponent has one big threat, and somewhat useless if not. The 0 ability is standard fare for Gideons and always good. The ultimate is really interesting and can win games if your opponent has no way to get rid of Guideon. All 3 drop planeswalkers have the potential to become great. I am not so sure about this one because preventing damage for +1 is not enough in many circumstances.
Oketra's Attendant: very good in Limited.... very good. It's a flyer, and when they kill it, you get a second flyer. If I drew five of these in Limited, I would be very happy. 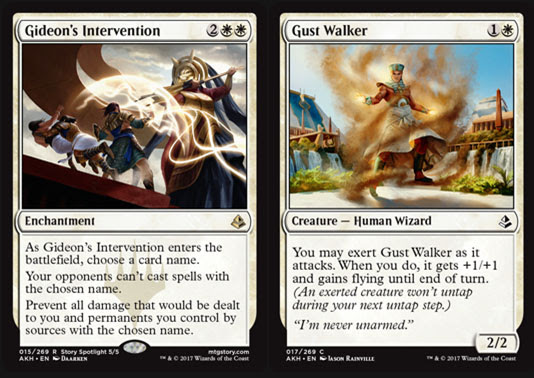 Gideon's Intervention: really useful hoser against any card that gets out of hand in a format. Yeah.... it's a great hoser to have in your sideboard. Pithing Needle is way better, but this is battlecruiser Standard.
Gust Walker: Limited. 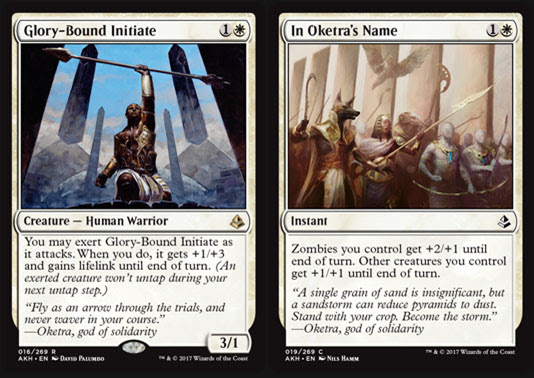 Glory-Bound Initiate: I will have to see how the loss of momentum to exert tapping affects games to understand if this card is good, or just a junk rare. It will allow you to hit hard early, but then you are skipping a turn to hit with it. It's a lot like Phasing (where the creature leaves the board for a turn and then is useful the next turn), but done differently.
In Oketra's Name: Limited Zombies.... I hope I get to play this. 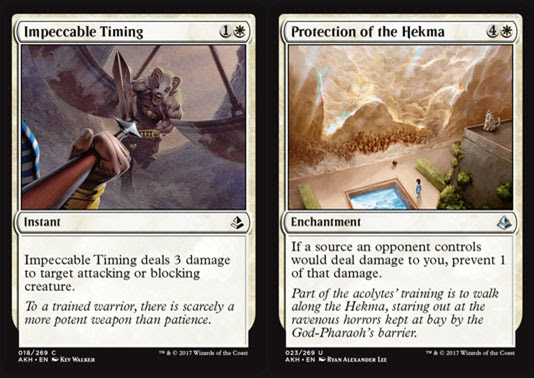 Impeccable Timing: Here is a great example of what happens when you lose the Core Set. This card just came out in Kaladesh, and we see it here for the second time. Limited.
Protection of the Hekma: Limited, and I think Limited Bad, however much I suck at Limited. 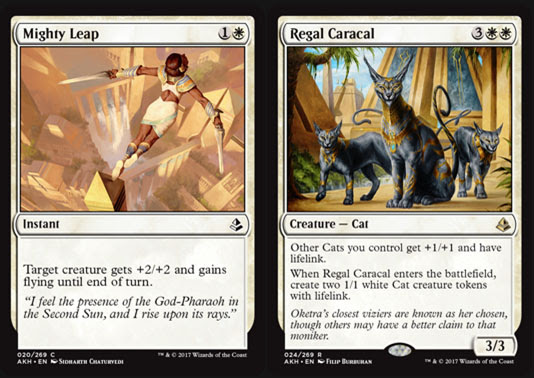 Mighty Leap: Welcome back, old friend. This card is not that old, though. It was originally printed in Magic 2011.
Regal Caracal: If only it was a 3-drop. As it is, it's battlecruiser Standard only. I would love Cat tribal, but we will have to wait for a better Cat lord. Even as a 4 drop it would have been good. 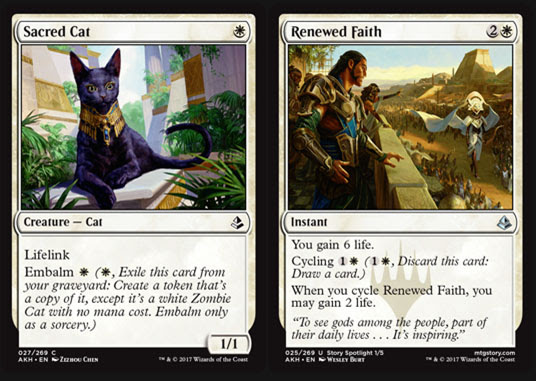 Sacred Cat: Great one drop. Not as awesome as Thraben Inspector, yet good. It's not like this card will enter the battlefield from the graveyard, though. All you do is create a token that's a copy of it.... nothing to break here.
Renewed Faith: Limited. 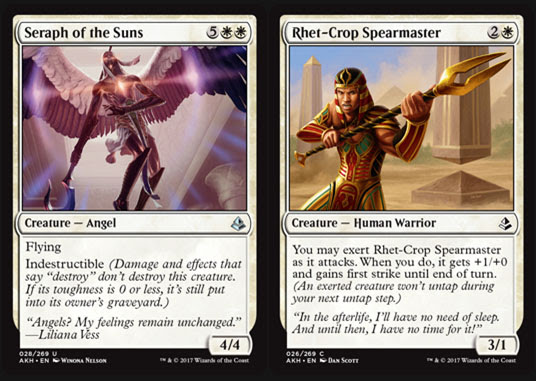 Seraph of the Suns: Limited.
Rhet-Crop Spearmaster: seems like it will be great in Limited, at least for one turn. 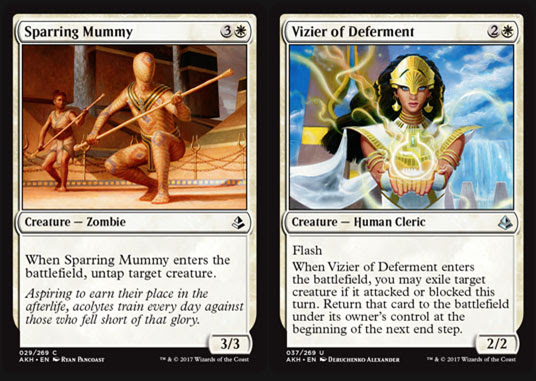 Sparring Mummy: Limited.
Vizier of Deferment: This is a great battle trick against a creature with a bunch of counters on it. 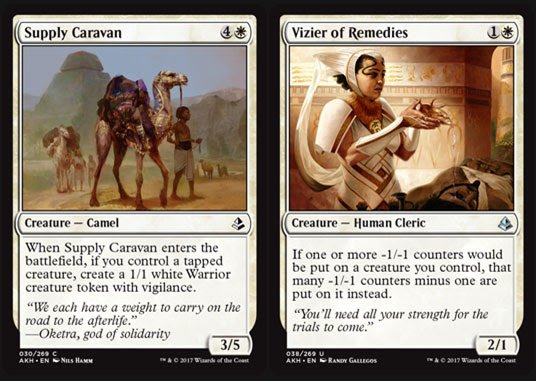 Supply Caravan: Limited.
Vizier of Remedies: a good way to prevent the -1/-1 counters strategy against you, but only useful in Standard and only when the meta has a lot of this strategy going on. If not, then this is a sideboard card. 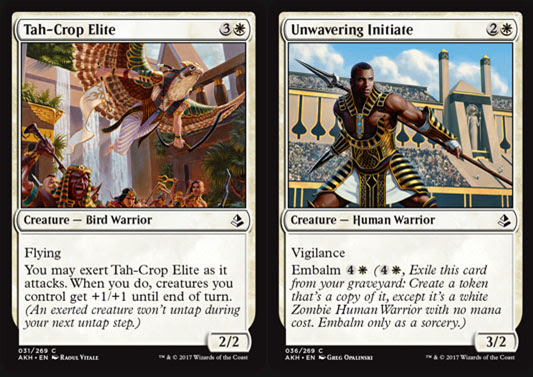 Tah-Crop Elite: A little late as a 4-drop, yet it buffs all your creatures.
Unwavering Initiate: seems really good in Limited. 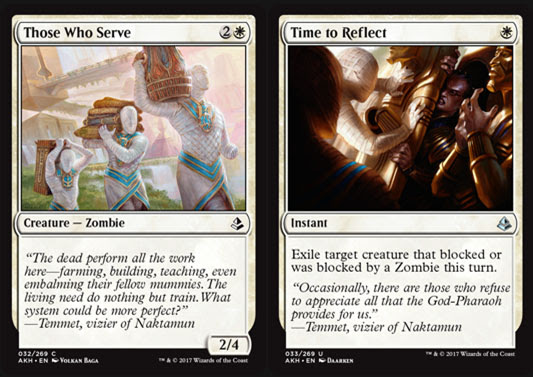 Those Who Serve: we need more vanillas and then we need some cards that give vanillas nice effects. We are not there yet.
Time to Reflect: this is going in my Zombie deck. Path to Exile without a drawback? I will take four! 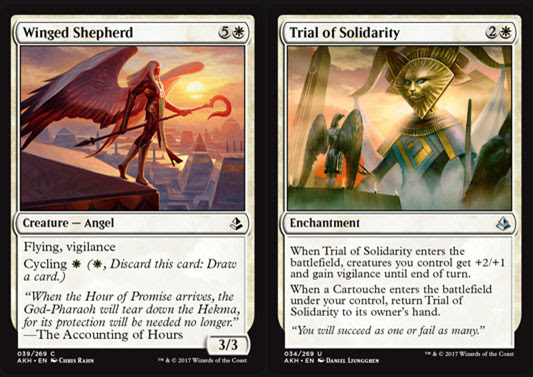 Winged Shepherd: Limited.
Trial of Solidarity: reads like a fun casual card! It's a little heavy for broken combos, yet it should be a lot of fun in casual. 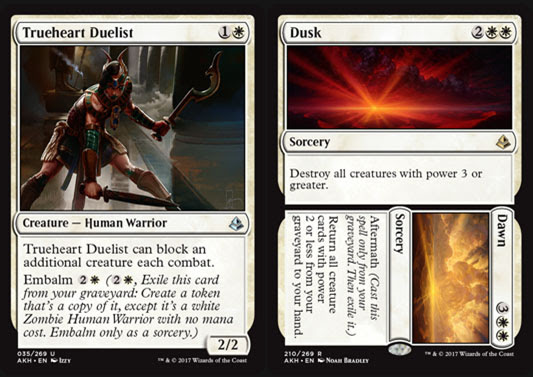 Trueheart Duelist: Inverse Menace seems nice. I wish it had Deathtouch.
Dusk//Dawn: both halves read great. Board wiping a bunch of big fat critters is great, and reanimating an army of little critters is also great.