No new decks I want to build after going through Red. I did run across a few Minotaurs that I would like to add to the Theros deck and run in Modern just for fun. 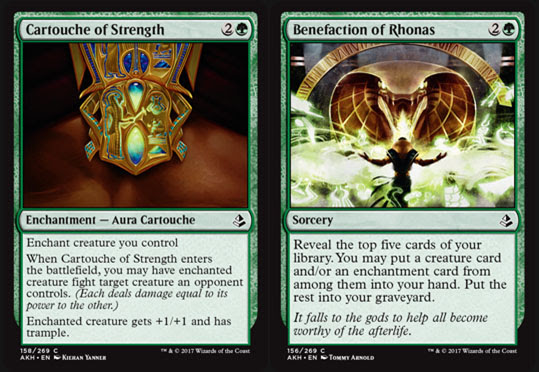 Cartouche of Strength: Decent target removal in Green. A little heavy for the effect, though.
Benefaction of Rhonas: A little heavy, yet a good effect to fill the graveyard in Black/Green and White/Green Embalm. 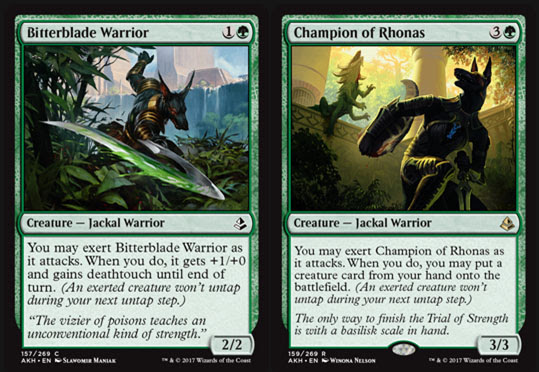 Bitterblade Warrior: Limited.
Champion of Rhonas: OK, this is really good. Any creature means Craterhoof Behemoth in Modern, and I am doing that with this. This is a great card and I want to play it. What's more, you can do it again two turns later. 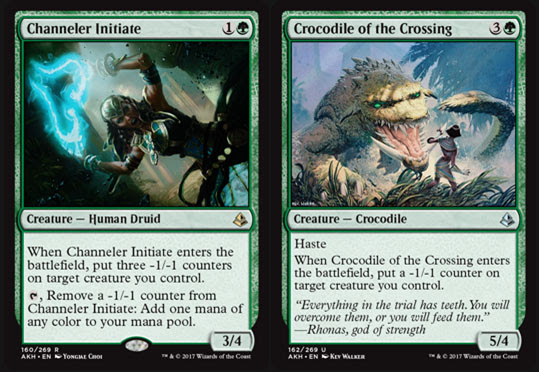 Channeler Initiate: Another auto-include in the '-1/-1 counters matter' deck with Nest of Scarabs.
Crocodile of the Crossing: Solid. It's aggressively costed, and the downside can be an upside if you have ways to move the counters or benefit from them. Haste on this creature is simply awesome. 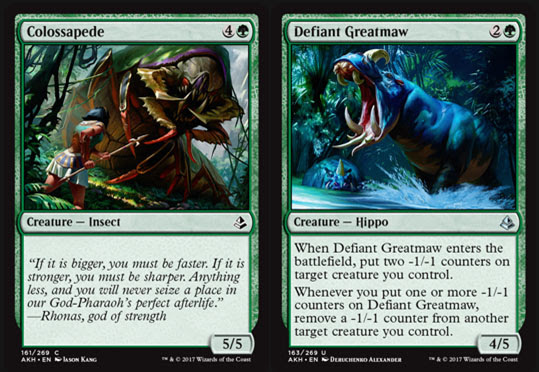 Colossapede: We need more vanillas, and a vanillas-matter card or two to buff them.
Defiant Greatmaw: (Cut and Paste) Solid. It's aggressively costed, and the downside can be an upside if you have ways to move the counters or benefit from them. Not only that, this one couples well with Crocodile of the Crossing 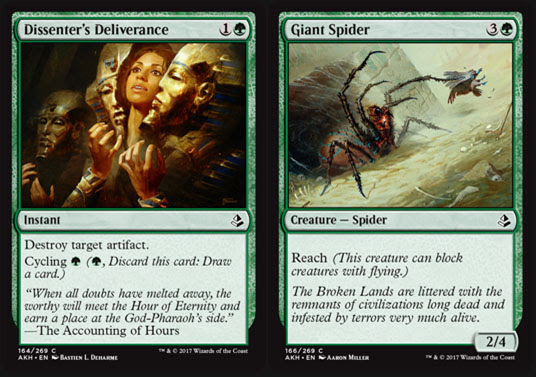 Dissenter's Deliverance: Good replacement for Naturalize to hose Kaladesh, except Naturalize can also destroy enchantments. Boy, do I miss the Core Set.
Giant Spider: Because we lost the Core Set. 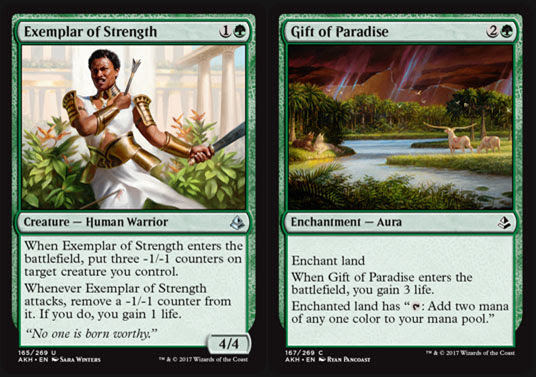 Exemplar of Strength: It's not overcosted because you are taking the hit for the counters. Gaining 1 life can only be good with very specific cards. As a lone effect, it sucks.
Gift of Paradise: Limited. Costed for battlecruiser. 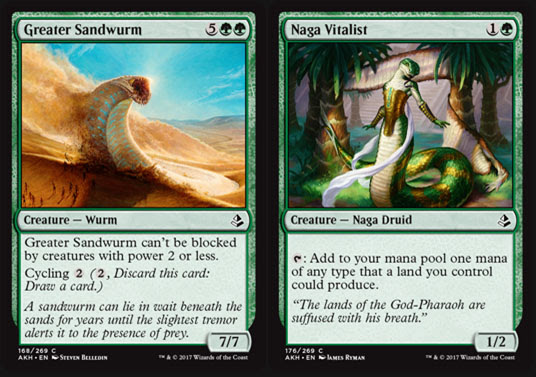 Greater Sandwurm: Limited.
Naga Vitalist: another battlecruiser 2 drop mana dork. We already have enough of these. 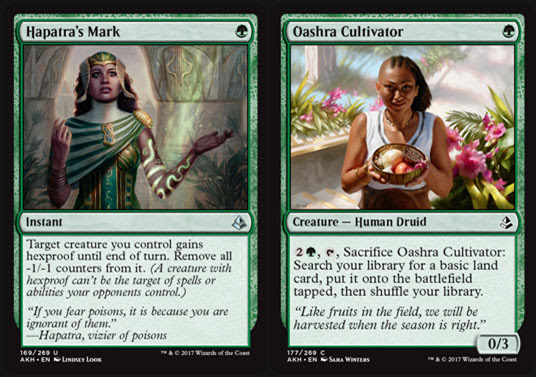 Hapatra's Mark: Not as good as it seems. It reminds me of Alpha Authority (1G Enchantment — Aura, Enchant creature, Enchanted creature has hexproof and can't be blocked by more than one creature.)
Oashra Cultivator: Limited. 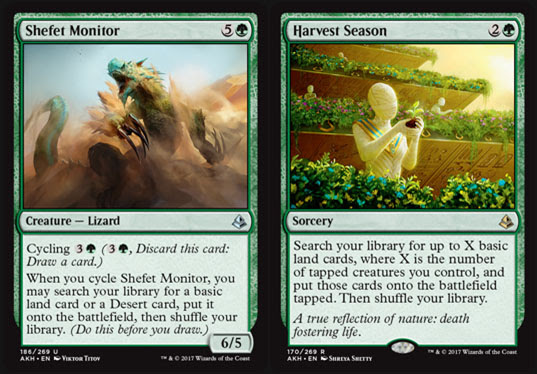 Shefet Monitor: Seems pretty good. What's a Desert card? Is that a reference to Desert Cerodon? If it is, that's cool. This is a 6 drop that doesn't win the game, and that means you will only be playing it in Standard. Oh, wait, I get it, this means a Desert LAND. There was a "Land - Desert" in Arabian Nights and there are two in this set. Yeah, it should read 'Desert Land' to make it clearer that you are not looking for cards with 'Desert' in their name. Or is it both?
Harvest Season: This is really good and I want to play it. I can see some really broken plays with it. It's an addition to the Doubling Season family. 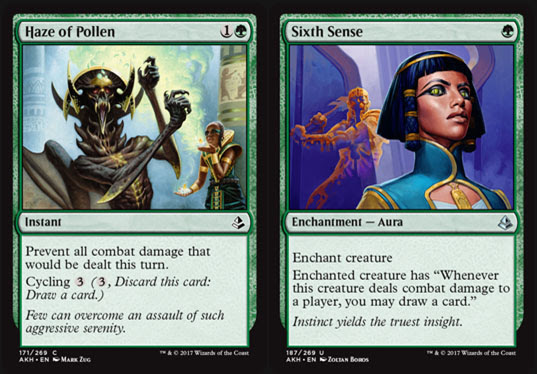 Haze of Pollen: Fog with Cycling. Fog is a 1 drop, and that makes a huge difference. That extra mana keeps this card out of a turbo Fog deck.
Sixth Sense: Great card. It says "draw a card," and that's all I wanted. Now we need to enchant something unblockable. I want to play it! Benthic Infiltrator is still in Standard. This is yet another card that bridges this block with another block still in Standard. This is a key function of the Core Set that has been lost. 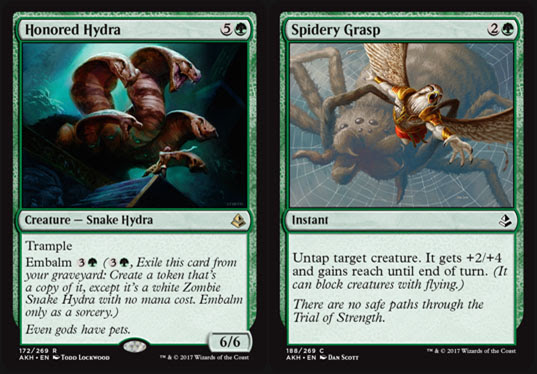 Honored Hydra: Junk rare for battlecruiser Standard. Reads like a good uncommon. If you can discard it from your hand, though, the Embalm cost is lower than the casting cost.
Spidery Grasp: Innistrad reprint. Limited. 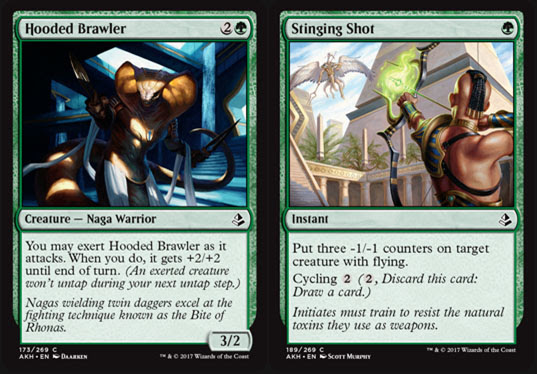 Hooded Brawler: Solid common is solid. I want to play it. In a Red/Green deck with Bloodlust Inciter already on the board, this can come in with Haste, hit for 5, and then sit out the next turn.
Stinging Shot: an aggressive, if somewhat limited Plummet, and you can cycle it. I like it. 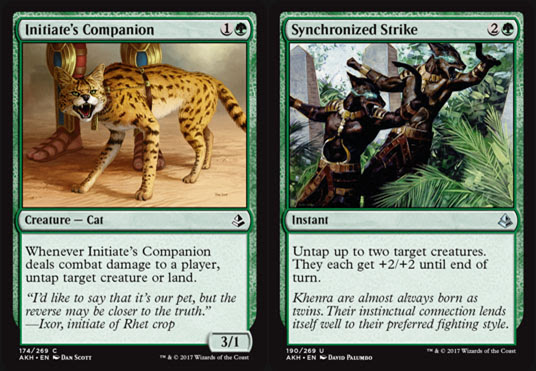 Initiate's Companion: Limited, and with a nice effect.
Synchronized Strike: Solid battle trick. It can help a defensive move, especially if those creatures were exerted immediately before you played this. Yeah, definitely a solid battle trick. 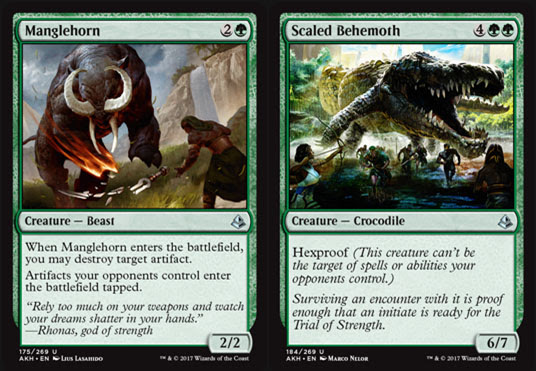 Manglehorn: Fantastic Kaladesh hoser. Otherwise a sideboard card since in Modern and Legacy you may not necessarily be up against an artifact deck.
Scaled Behemoth: Solid in battlecruiser Standard. 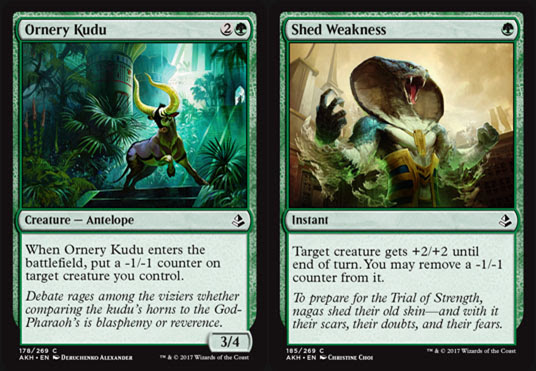 Ornery Kurdu: Limited.
Shed Weakness: Limited, and a nice upside to limit the damage of -1/-1 counters to your creatures. 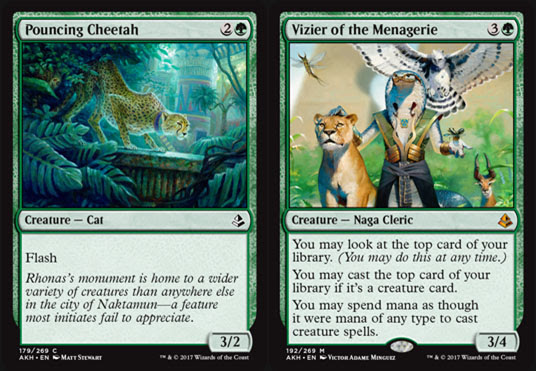 Pouncing Cheetah: Limited, and a great battle trick if you save up the mana to cast it with Flash.
Vizier of the Menagerie: Reads Mythic allright. It must be removed immediately, and if it isn't, it's a toolbox that will end the game in very few turns. I would add a few Scry cards, play this in Blue/Green, and have a few Craterhoof Behemoths in my deck. 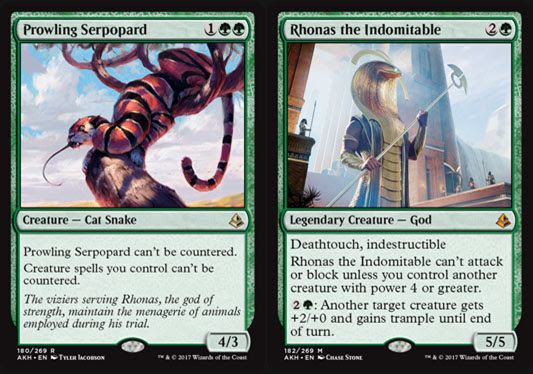 Prowling Serpopard: Very strong, and an addition to a deck I have been thinking about for a long time in Legacy that uses all of the Green creatures that can't be countered.
Rhonas the Indomitable: Now, that's a really clean and strong God. None of that 'seven cards in hand' nonsense. In Green, you will be able to satisfy this clause easily. One of the better Gods, for sure. 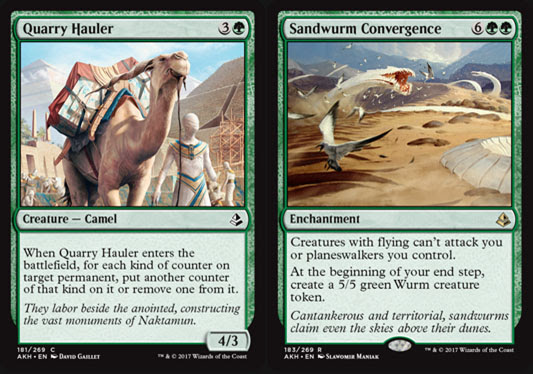 Quarry Hauler: The -1/-1 counter healer. Needed in this format, even if a little too heavy for Modern.
Sandwurm Convergence: A great 'go big' creature in Standard. If you get to cast this, you probably are going to win the game before you get any of the tokens. 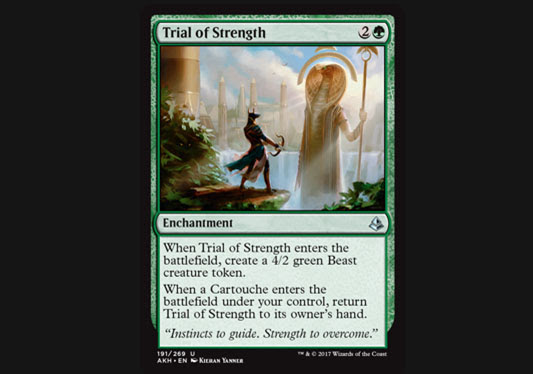 Trial of Strength: I want to play it. It reads strong. 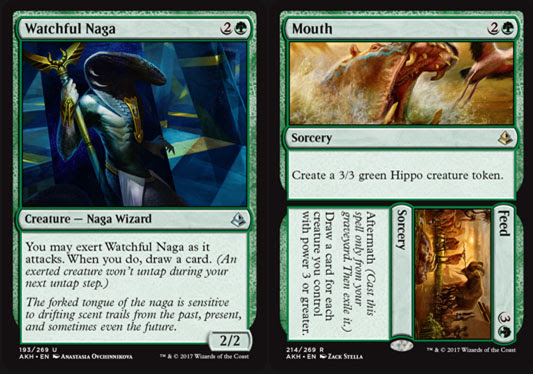