White was OK, but, except for the Zombie Path to Exile, I did not come across any "wow" cards. 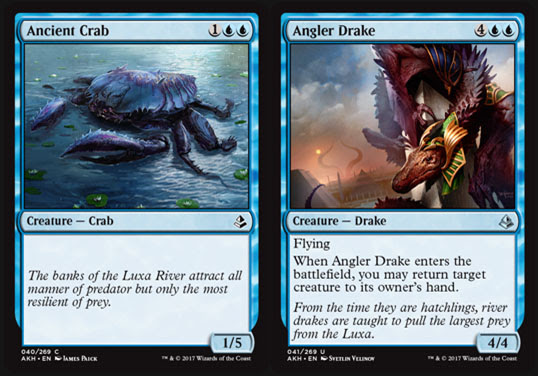 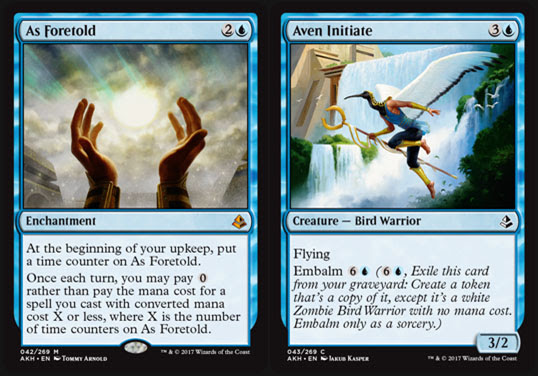 As Foretold: Let's compare with Aether Vial, a 1 drop artifact (At the beginning of your upkeep, you may put a charge counter on Aether Vial. Tap: You may put a creature card with converted mana cost equal to the number of charge counters on Aether Vial from your hand onto the battlefield.) This version is much more versatile since you are not locked into a single mana cost, yet it costs two more mana and is in Blue. Should be really good, especially in Standard.
Aven Initiate: Limited. 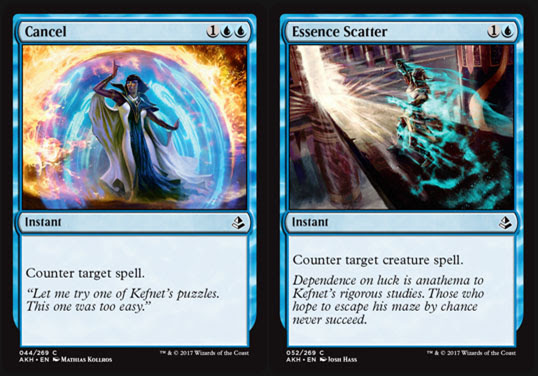 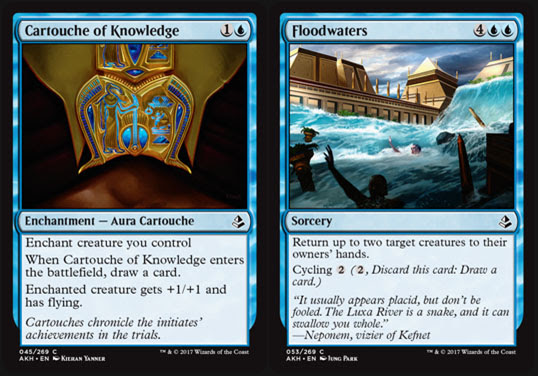 Cartouche of Knowledge: "draw a card" OK, you have my attention.
Floodwaters: Limited. Cycling reads like the kiss of death for Constructed playability. 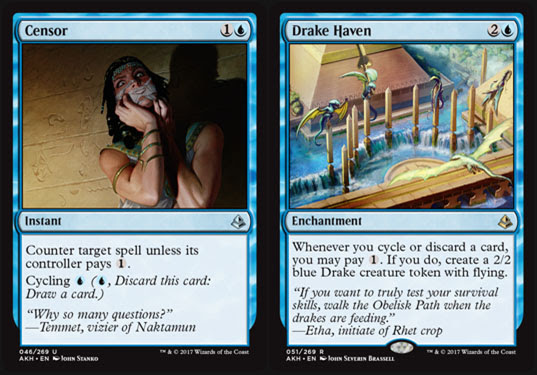 Censor: another battlecruiser variant of Mana Leak. Don't we have enough of these already?
Drake Haven: Now we are talking. I definitely want to build a deck around this card. Coupled with Anointed Procession, you get twice the tokens. 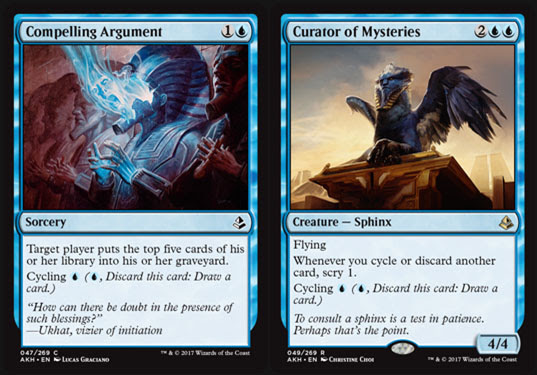 Compelling Argument: Tome Scour for one more mana and Cycling.
Curator of Mysteries: reads like a junk rare. Every one of those Scry 1's is going to cost you. Cycling seems much better than it actually is. I want to draw good cards I don't want or need to cycle! 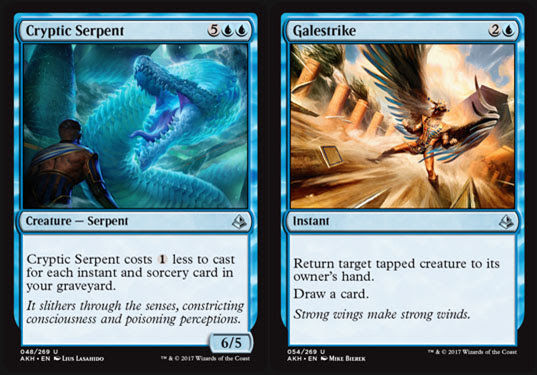 Cryptic Serpent: that's a cool effect. I would like to abuse it.
Galestrike: Functionally a similar card to Drag Under, except at instant speed instead of as a Sorcery, and the creature has to be tapped. Repulse is an older version (from Invasion) minus the tapped clause. 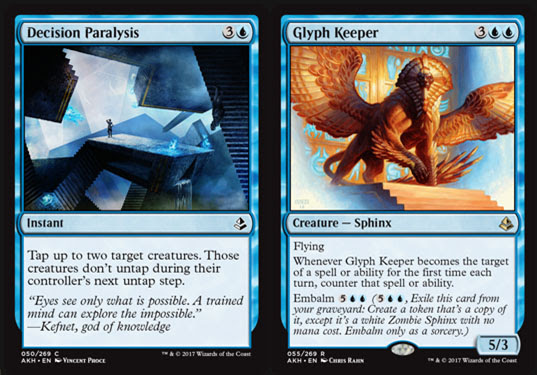 Decision Paralysis: Limited.
Glyph Keeper: interesting rare. It's still a junk rare, but it is an interesting one. The Embalm cost is very much a late game battlecruiser thing. 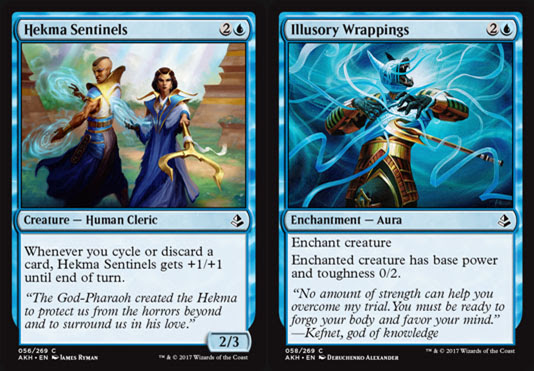 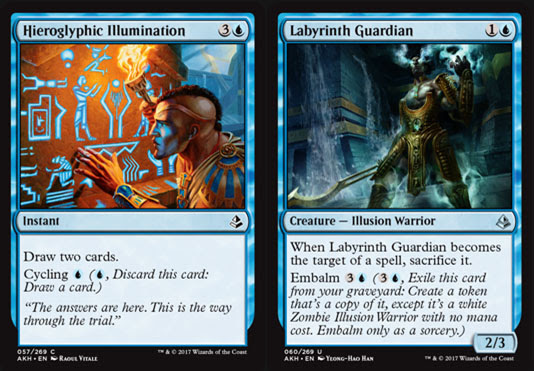 Hieroglyphic Illumination: Because every set these days needs a Divination that costs one more mana. Why can't we just play Divination?!
Labyrinth Guardian: Similar to Frost Walker, except weaker, and with the Embalm upside. 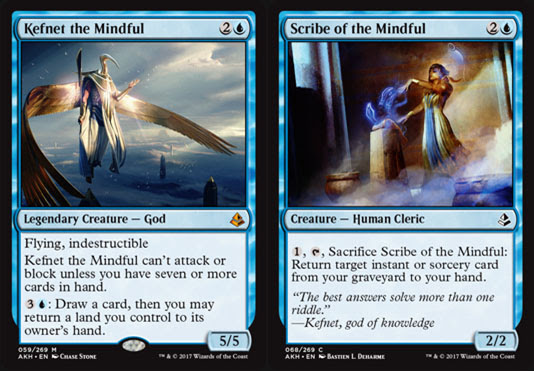 Kefnet the Mindful: Wow.... but wow bad. This has to be one of the weakest junk Mythics from the battlecruiser era. Seven or more cards in hand puts this in Saviors of Kamigawa bad territory.
Scribe of the Mindful: For the same cost, Archaeomancer does not need to be sacrificed. 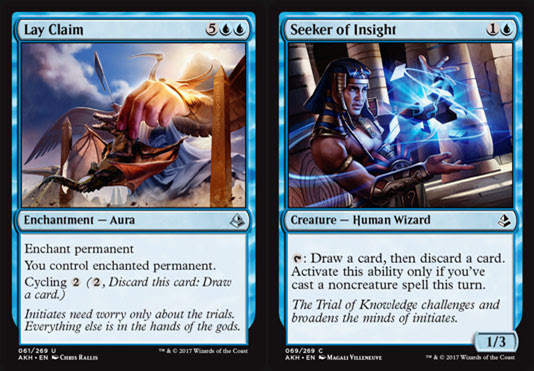 Lay Claim: It would require a lot of counterspells to get to play this. If I was playing this on MTGO, I would make sure to ignore the Chat.... some salt this will generate.
Seeker of Insight: The noncreature spell hoop is OK, but only just OK. 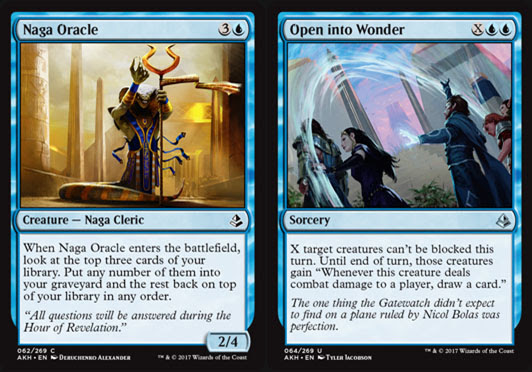 Naga Oracle: A little late, yet good for reanimator. There have been better cards for this effect even in recent sets (example, Taigam's Scheming). Limited.
Open into Wonder: that's a good effect. Actually, that's a really good effect. I want to play it. 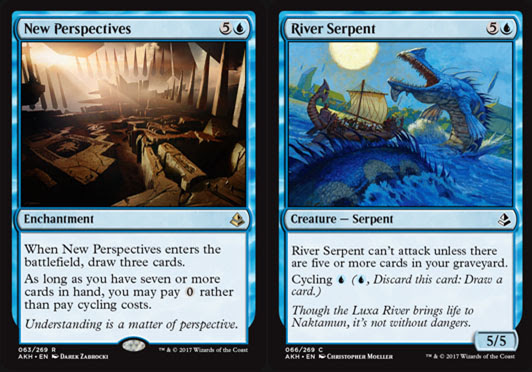 New Perspectives: this is the Opportunity of this set. Every time I read a 'cards in hand' clause, Saviors of Kamigawa is all I can think of.
River Serpent: Limited. 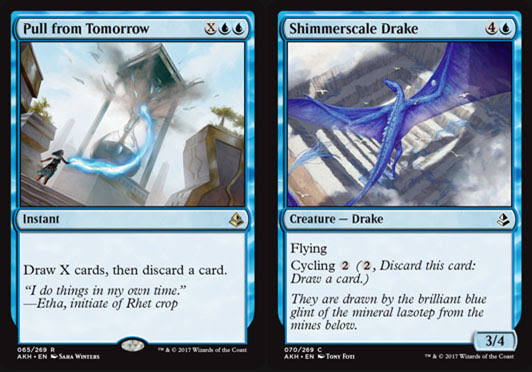 Pull from Tomorrow: great late game. I can see this being very useful in a control shell. I want to play it.
Shimmerscale Drake: Limited. Every time I read "Cycling" I feel like someone is already guiding me as to which cards are aimed at the Limited format. 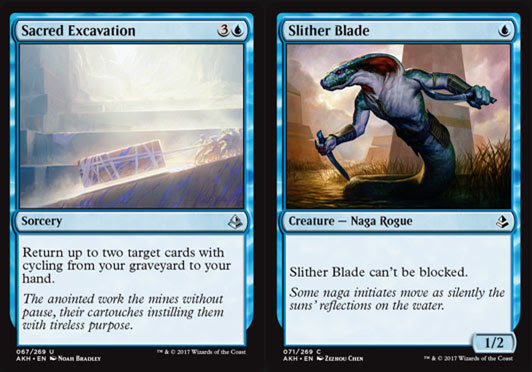 Sacred Excavation: It would be an amazing card if Cycling cards were good in Constructed. But this is mostly not the case. I would definitely use it in Limited, though.
Slither Blade: a great card to buff up. I like it a lot. 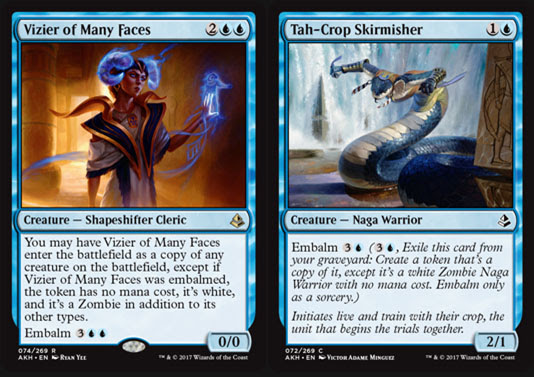 Vizier of Many Faces: not sure how different it is from Phantasmal Image. It costs 2 more mana, yet it has several upsides: it does not die to spell effects, and it can be another Zombie. You can also get a second copy out of your graveyard late game.
Tah-Crop Skirmisher: Limited. 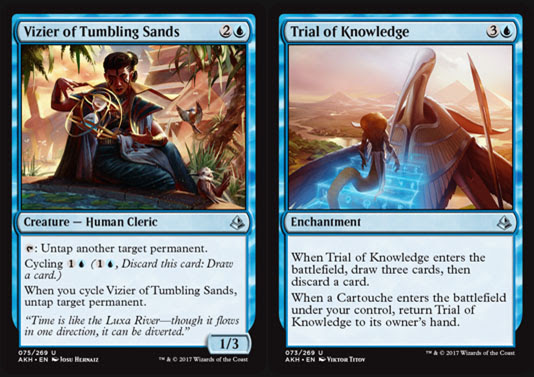 Vizier of Tumbling Sands: I would have to see this in play to appreciate its uses better. Reading it without playing it makes it look like a Limited card when it need not be.
Trial of Knowledge: it will be interesting to figure out what is the most fun combination of trials and cartouches. I want to do that. The result could be a well-optimized casual deck. 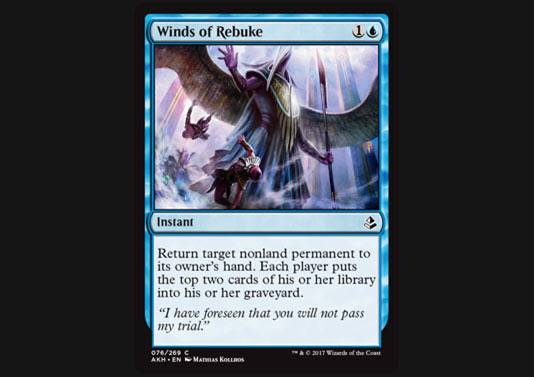 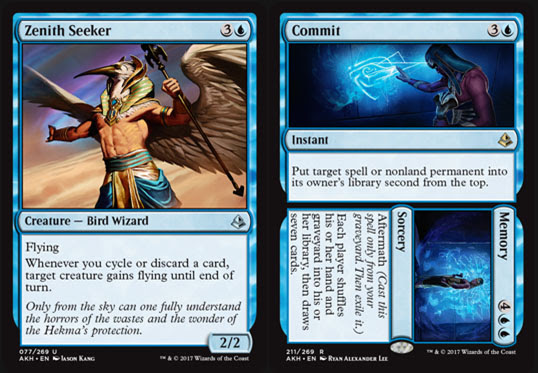 Zenith Seeker: reads like a Limited common. What am I missing?
Commit//Memory: Commit seems like a desperation play, and Memory seems like a play that can backfire terribly. At least as a 6 drop, you will likely have a lot of time to think before you pay for Memory.
Posted by Rubiera