After the success of Return to Ravnica, new sets include a nice selection of multicolored cards. I always have fun with these. 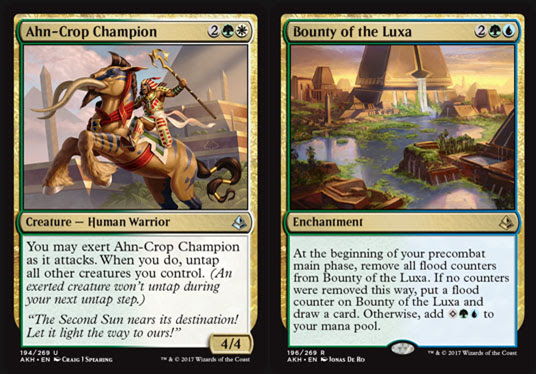 Ahn-Crop Champion: The Exert effect is a good one since it applies to all of your creatures. If you don't use it, it's still a square creature (4 drop 4/4) and that's OK.
Bounty of the Luxa: This is a lot of fun. It reminds me of Bring to Life from Battle for Zendikar as a fun effect that makes you think. You get two effects with this, and they alternate. That's fun. Getting an extra card every other turn is great, and getting three additional mana every other turn is also great. 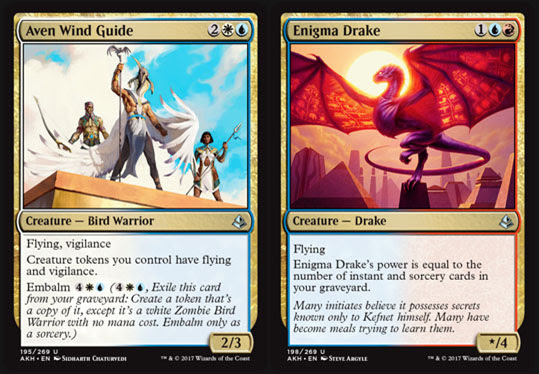 Aven Wind Guide: Another fun card. By the time you drop it, you should have a small batch of tokens. It's similar to Intangible Virtue (1W Enchantment, Creature tokens you control get +1/+1 and have vigilance.) from Innistrad.
Enigma Drake: A cousin of Spellheart Chimera (1UR Creature — Chimera (Flying, trample, Spellheart Chimera's power is equal to the number of instant and sorcery cards in your graveyard.) And just like it's cousin, it will be fun to play, but not super strong, which is fine for casual decks. 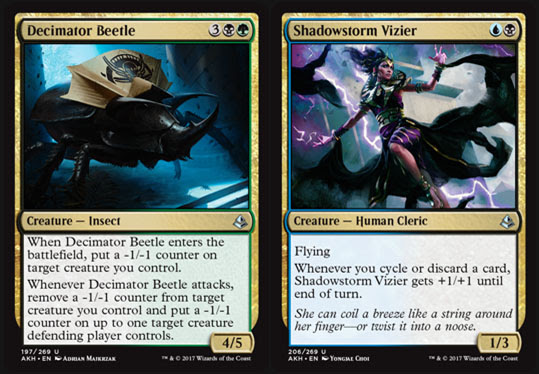 Decimator Beetle: The effect is great, but at 5 mana, it's on a too-heavy creature and will not trigger more than once or twice. I encountered a similar issue when playing Possessed Skaab 3UB Creature — Zombie (When Possessed Skaab enters the battlefield, return target instant, sorcery, or creature card from your graveyard to your hand. If Possessed Skaab would die, exile it instead.) from Origins. I really wanted to have fun playing Possessed Skaab but in the vast majority of games, I either won or lost before I got to cast it.
Shadowstorm Vizier: Cool card for a janky deck full of Limited jank with Cycling, and this set has many of those cards. There are also a bunch of other janky Cycling cards that have been issued in Modern and Legacy. It would be fun to see how big this can get in such a deck. 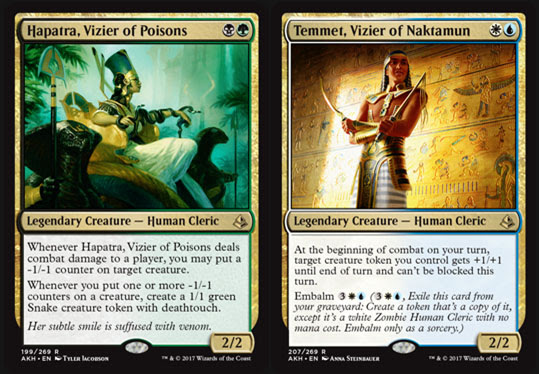 Hapatra, Vizier of Poisons: Oh, this is great. It's an auto-include in the '-1/-1 counters matter' deck. You are putting counters on your opponent's creatures and making tokens from that action. That's just awesome.
Temmet, Vizier of Naktamum: Come up with a way to have the biggest possible creature token as early as possible, and this makes it unblockable. I like it a lot. It's Legendary because if it wasn't it would be completely broken. The Embalm cost is too high; it might as well not be there most of the time. 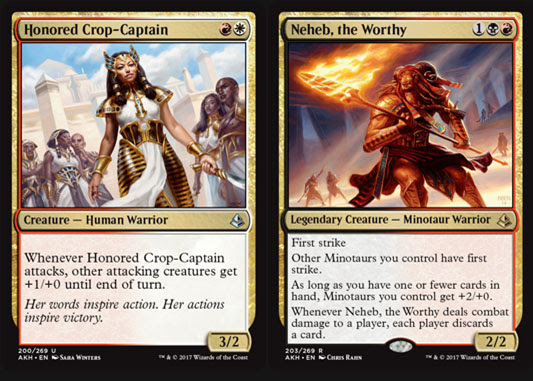 Honored Crop-Captain: Nice buff for a casual army builder. I like it a lot. It goes well with Akroan Hoplite WR Creature — Human Soldier (Whenever Akroan Hoplite attacks, it gets +X/+0 until end of turn, where X is the number of attacking creatures you control.) from Theros.
Neheb, the Worthy: This is an awesome addition to the Minotaur deck from Theros block. Yeah, I want to play this bad. 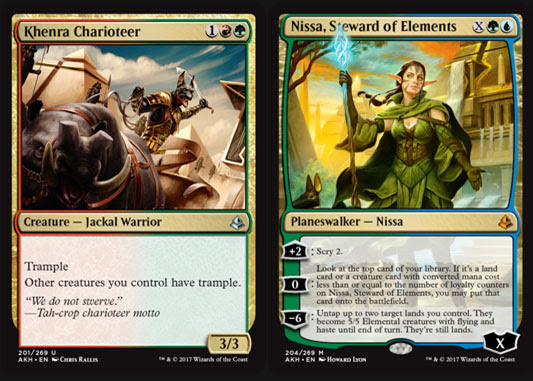 Khenra Charioteer: Reasonable alone, great with bigger critters on your side of the board.
Nissa, Steward of Elements: This is a really cool planeswalker. I hope it is weak in Standard so that I can get a playset on the cheap. It belongs in a casual Green devotion Modern deck. Cast it for X=7+ and use the ultimate as soon as it enters. That's a great entrance, with two 5/5 Flyers. Next, protect it and +2 for a few turns. Then start playing the 0 ability for Johnny goodness. 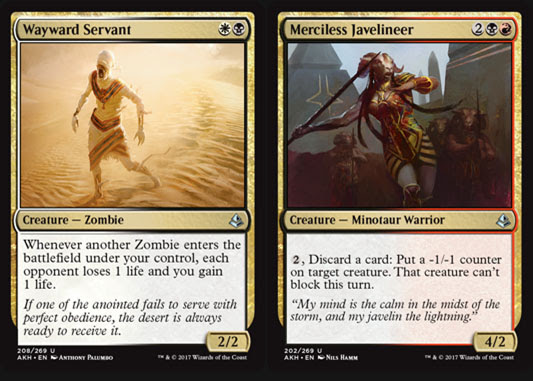 Wayward Servant: Oh, yeah, get in my Zombie deck right now!
Merciless Javelineer: Discarding a card isn't free, and needs to be put into a deck with care. Otherwise, you will have cards you will not want to discard, and this effect will go unused. This is a great nod to Shadows over Innistrad block. Oh, and it's a Minotaur... that's great. 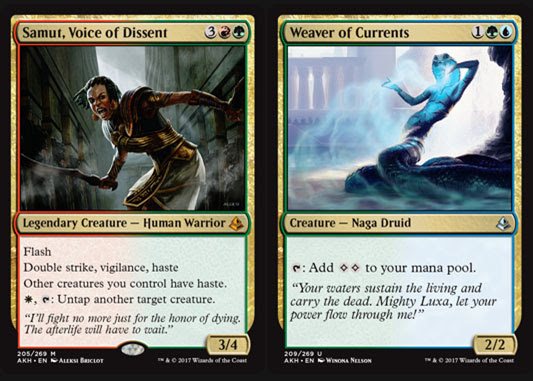 Samut, Voice of Dissent: It's in the Naya colors (White, Red, Green). It should be the creature that ends the game in your favor. You can bring it in with Flash to stop an attack, and then attack for the win next turn.
Weaver of Currents: Nice mana bonus for a casual deck. Goes well with Hedron Archive 4 Artifact (Tap: Add CC to your mana pool. 2, Tap, Sacrifice Hedron Archive: Draw two cards.) Another card with cross-block synergy.

This cycle is similar to previous split card cycles, especially the one issued in Dragon's Maze. I had a lot of fun with many of those cards. I hope I have fun with these. 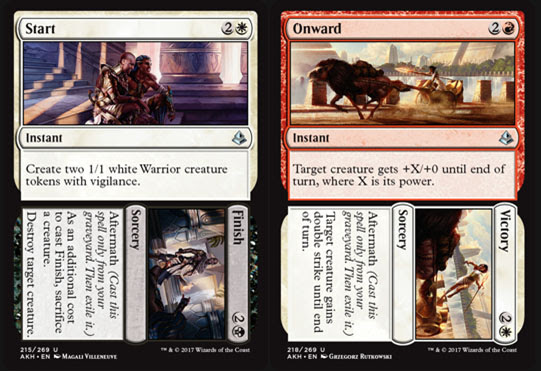 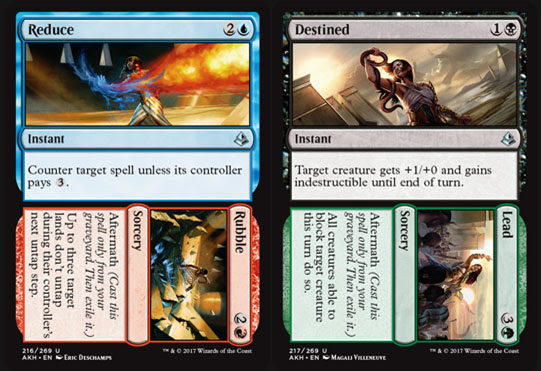 Reduce//Rubble: OK, I am sounding like a broken record. All of these cards are over-costed by one mana because you get the Embalm benefit. I get it. I wish we had fractional mana, because all of these cards would be really useful if the difference between the in-the-hand spell and what it is inspired by was 1/2 mana. A 3 drop Mana Leak just isn't good, no matter what the upside from Embalm may be.
Destined//Lead: Yeah. These cards suffer from the same problem the Dragon's Maze split cards suffered from. They are over costed by 1 mana for a good reason, but you have to play two colors, and that is a disadvantage. Lead is a narrow effect, and just isn't worth it except if you decide to build your whole deck with the sole purpose of making this card playable, which a Johnny deckbuilder like yours truly will do, but almost no one else will ever bother doing. 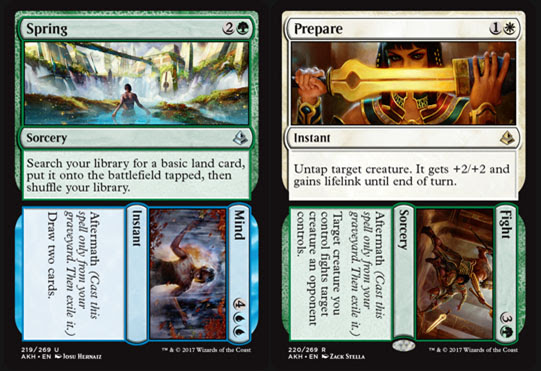 Spring//Mind: Six mana for two cards late game isn't bad.
Prepare//Fight: One more thing. Except for battlecruiser Standard, you don't want to play any of these in-the-hand spells in Constructed, especially for one more mana, and your game plan should not include waiting around for the Aftermath benefit. No.... this just doesn't work. I am sorry, it does not. Not in Modern. 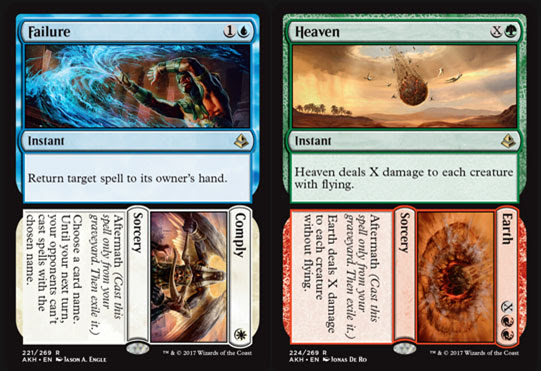 Failure//Comply: No. This is a cute combination of two denial actions, but by the time you get around to use Aftermath... no, this doesn't add up. You are spending 3 mana (1WU) to send a spell back to the hand and keep it there next turn. That's a lot of work. For the simple use of Cancel (1UU) you get to counter said spell outright. The extra mana cost across the board for the in-the-hand, or top spell, means none of these cards will likely see play outside of battlecruiser Standard.
Heaven//Earth: Interesting combination. 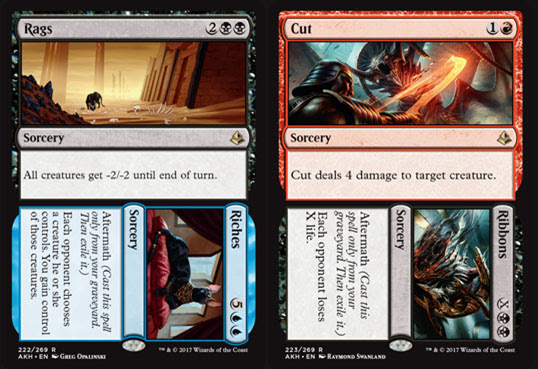 Rags//Riches: If you are able to play Riches, you could have won some other way by then.
Cut//Ribbons: Ribbons is actually a pretty good effect, but you need a creature to hit with Cut, which will happen often enough in Standard.
Posted by Rubiera