I know I am planning to build at least Esper (White/Blue/Black) Zombies and a '-1/-1 counters' deck. I may also build a janky Cycling deck. 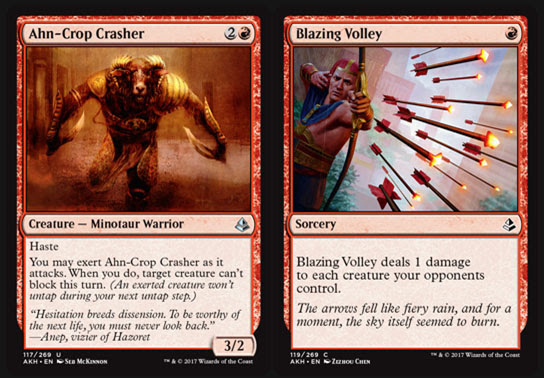 Ahn-Crop Crasher: Exert seems better on a weaker creature. I would not like to tap this creature for the Exert benefit unless I really, really had to. It's a solid hitter.
Blazing Volley: great sideboard card. Against some decks, it will be amazing. 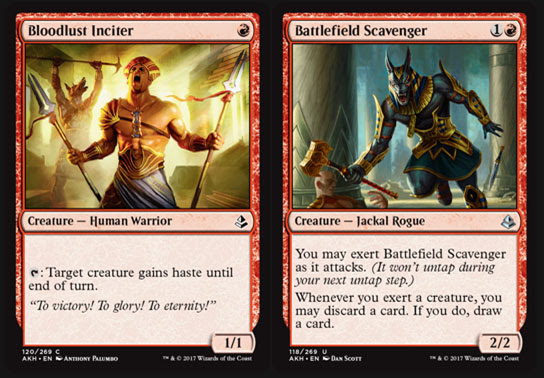 Bloodlust Inciter: I really like this card. It can be used late game to great effect. Yeah, I really, really like this card. This can make your bigger hitters have Haste one at a time.
Battlefield Scavenger: Seems innocent enough, but I can see how this card could be abused. You can do the 'discard, then draw' for each of your Exert creatures. You can couple that with Cycling effects as well. This card makes me think. 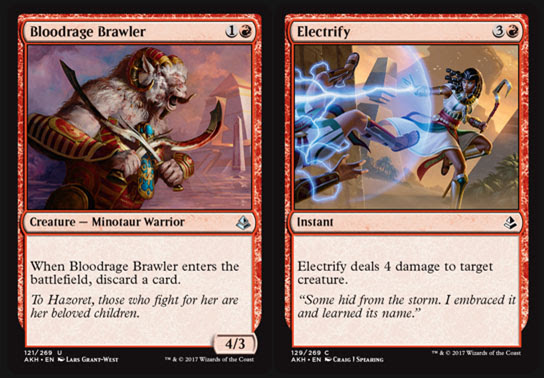 Bloodrage Brawler: this card reads like a 'combo with Madness' card. I like it. One of my biggest complaints about the loss of the Core Set is how within-block Standard decks now tend to be. This card makes me want to combine Madness with cards from this set.
Electrify: Limited. 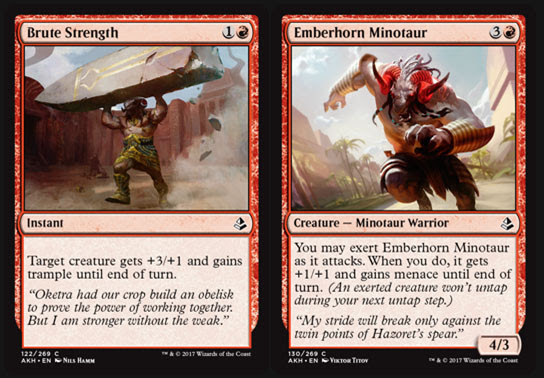 Brute Strength: Limited.
Emberhorn Minotaur: Limited, and to good use. 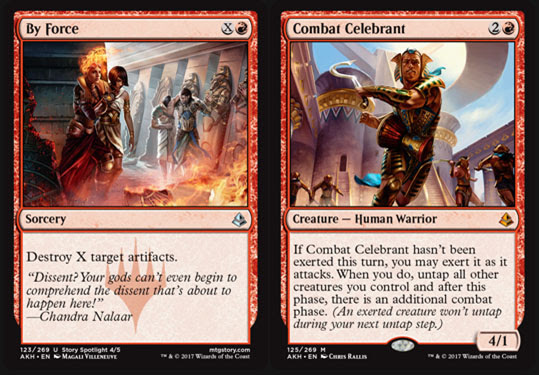 By Force: Kaladesh hoser.
Combat Celebrant: Wow, as in really a positive 'wow.' It can die the first time you Exert it, but if you time it right, this is the card that will win you the game. 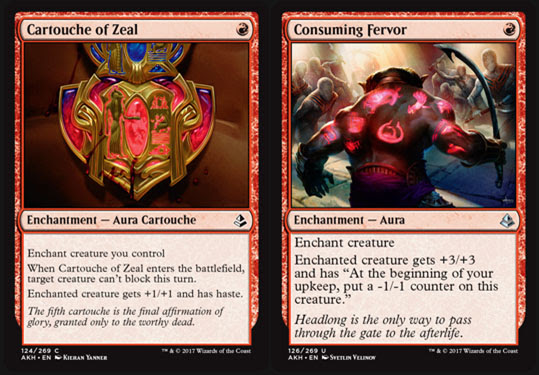 Cartouche of Zeal: its reasonable. You don't have to play it early game. You can play when you want to attack past a big threat later in the game.
Consuming Fervor: Interesting downside. If it can be played with Nest of Scarabs, the downside can be turned into an upside. 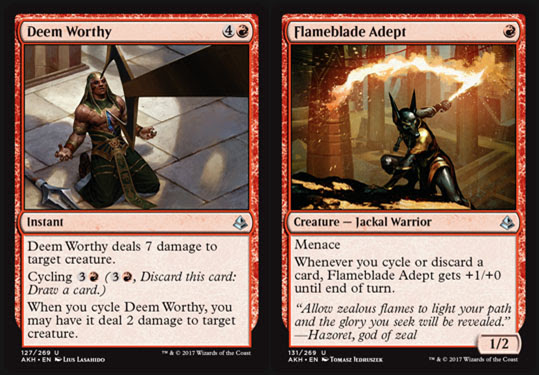 Deem Worthy: Limited.
Flameblade Adept: that's really good. There are many ways to abuse Cycling in this set. 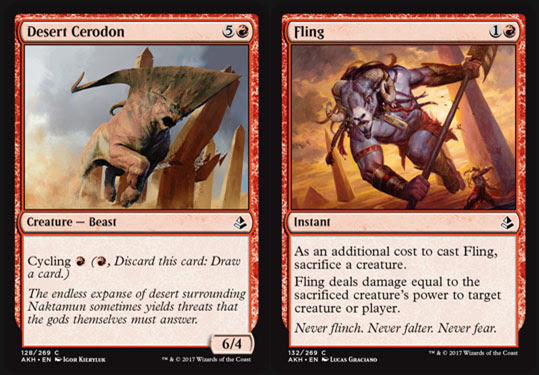 Desert Cerodon: Limited.
Fling: Welcome back, old friend. It looks like Act of Treason is not currently in Standard. One of my favorite janky plays of all time is to steal a creature with Act of Treason and then Fling it. 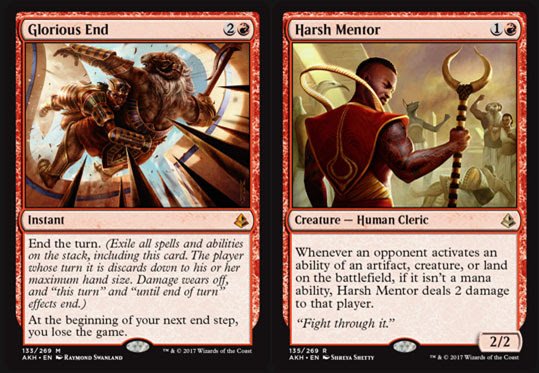 Glorious End: Reads Mythic enough. It requires understanding turns well. If you don't, you lose!
Harsh Mentor: Oh, this is very good. It reads like a money rare. It does not hit Enters-the-Battlefield (ETB) abilities, right? If it did, that would be bonkers. 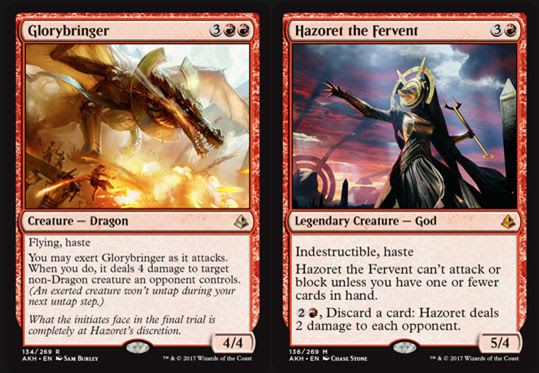 Glorybringer: It will be strong in Standard. It needs to be a 6/6 and have some other effect to make it's mark in Modern.
Hazoret the Fervent: Now here is a God that can do well. It's easy in Red to end up with an empty hand, and it has Haste. This one is strong. 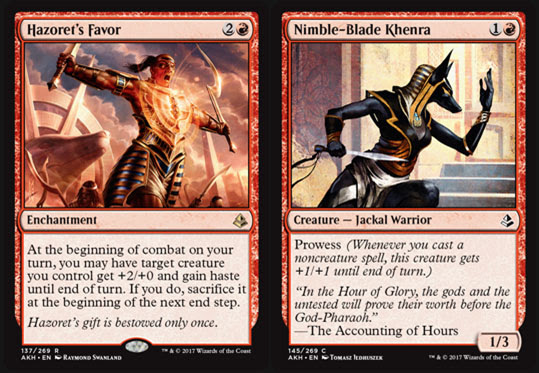 Hazoret's Favor: seems like not much of a benefit. I think this is a junk rare.
Nimble-Blade Khenra: Limited, and good. I love Prowess. It is always a great ability. 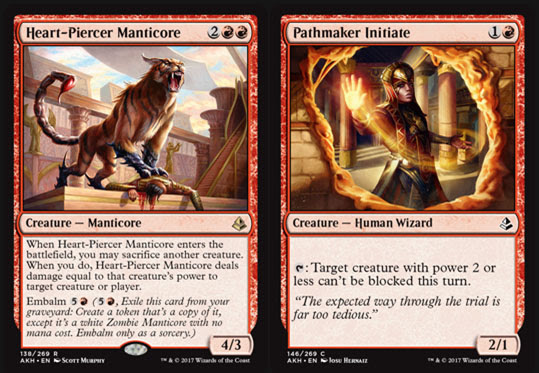 Heart-Piercer Manticore: Not bad. It will be an even better play if one of your creatures has been paralyzed with Pacifism or one of its variants. You only get the sacrifice bonus once per ETB.
Pathmaker Initiate: Limited. 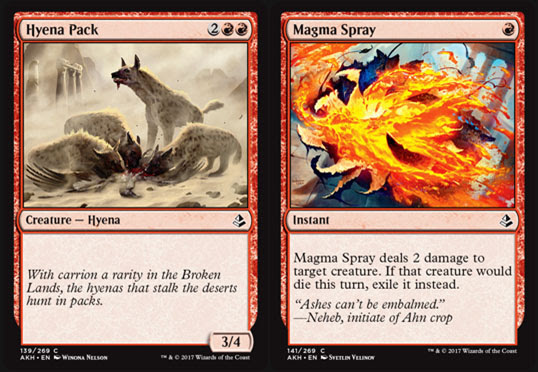 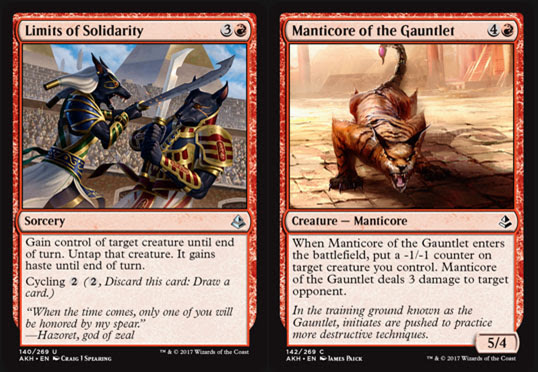 Limits of Solidarity: OK, we don't have Act of Treason, but we at least have this. It's one more mana, yet it can be used to combo with Fling.
Manticore of the Gauntlet: Those are two good ETB effects for late game in Limited. 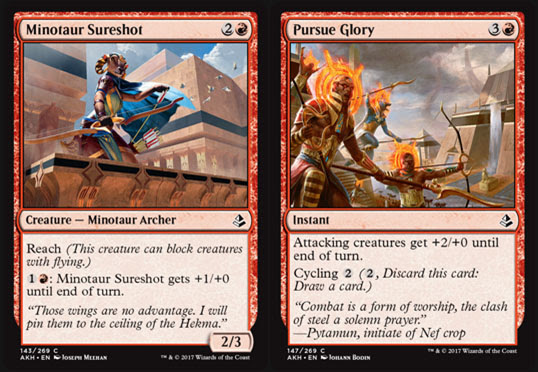 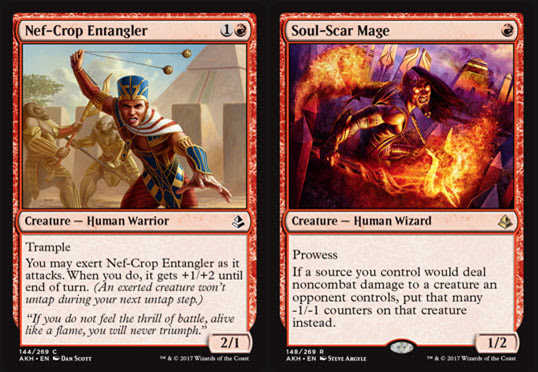 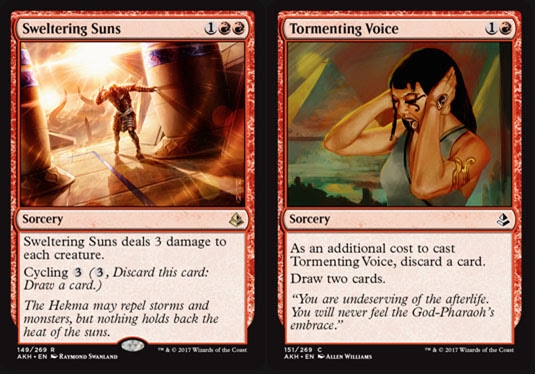 Sweltering Suns: Reasonable board wipe early game. I see why Cycling can be useful on this card late game.
Tormenting Voice: Because we no longer have a Core Set. 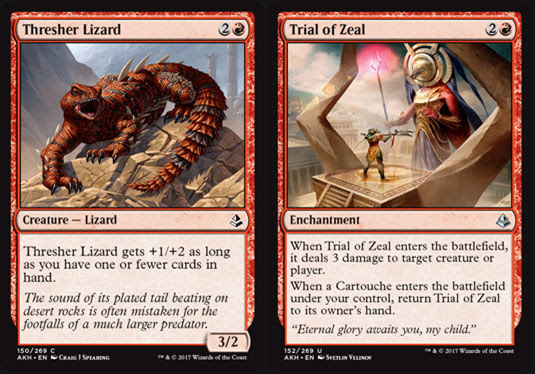 Thresher Lizard: Limited.
Trial of Zeal: The effect is really good, especially because it has "or player," but the cost isn't so great. It's costed for battlecruiser Standard. 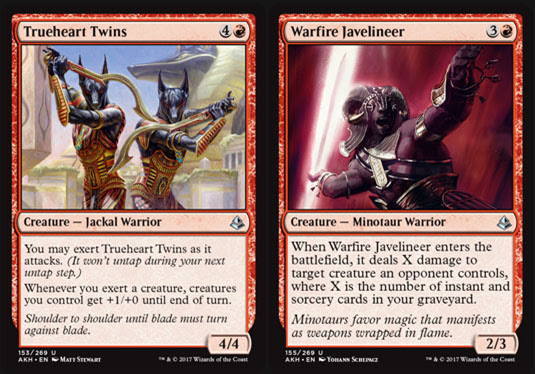 Trueheart Twins: This is a much better Exert clause than the ones that only apply to the one creature being Exerted, and you can use it for all of your creatures. This is a solid battle trick card.
Warfire Javelineer: Another solid battle trick card, except it only targets one creature. It can be dead in the hand as you wait to be able to use the effect, or you will have to play it minus the effect, in which case it's effectively a vanilla creature. 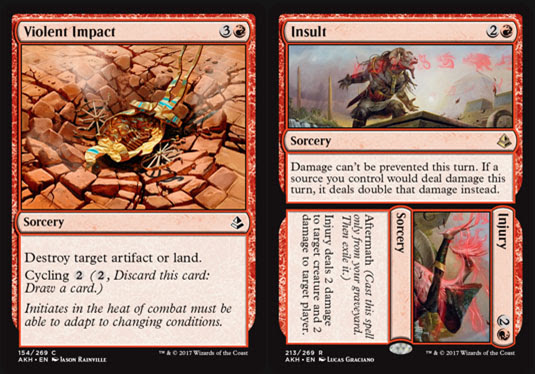 Violent Impact: Another over-costed battlecruiser card. Someday we will look back at this era of Magic and reflect on all these overcosted cards that are a waste of a slot in these sets. This type of spell has the same feel-bad that the over-costed creatures from the Legacy era have. Compare with Pillage, from 6th Edition (1RR Sorcery, Destroy target artifact or land. It can't be regenerated.)
Insult//Injury: Underwhelming as a rare. It would have been great as an uncommon. The key clause that makes it good (if it was an uncommon) is "you control." Yeah, I would have preferred it be an uncommon as a Sorcery, or rare and at Instant speed and bumped up to 4 mana for Insult. As a Sorcery your opponent sees you coming, and has advance warning to react to it. The surprise play as an Instant would have made it awesome.
Posted by Rubiera