Black was allright, but Blue is I think a stronger color in this set. 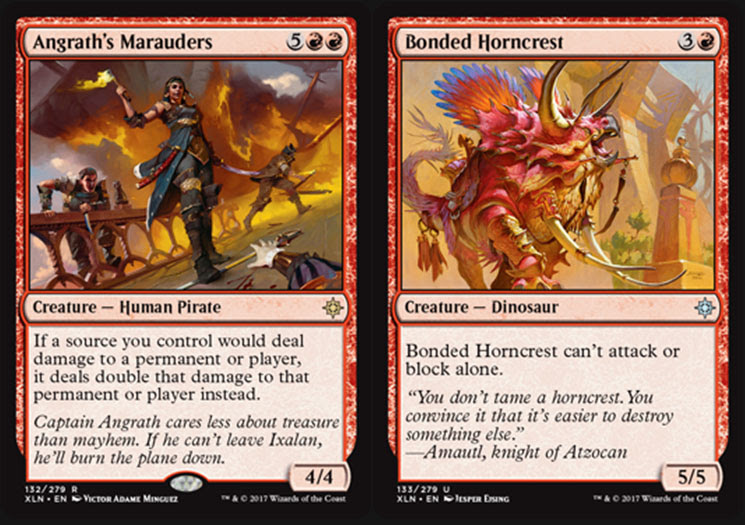 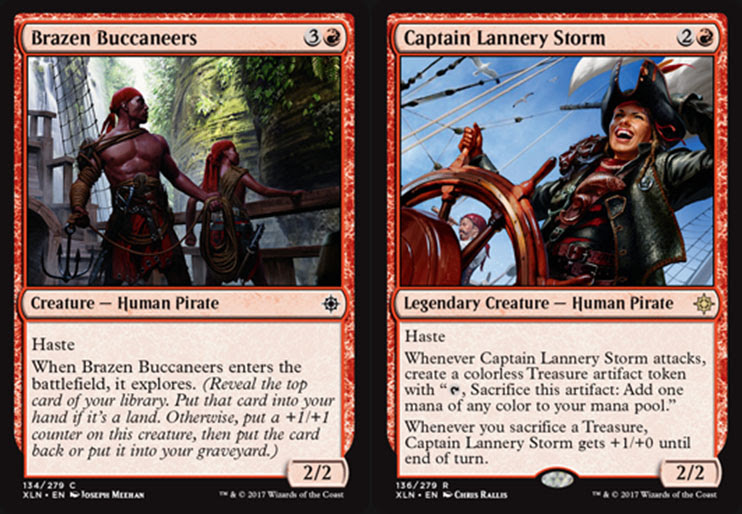 Brazen Buccaneers: Meant for Limited.
Captain Lannery Storm: I am not seeing strength. You can cast it when your opponent doesn't have any creatures on the board and get your token, but it's easy for an opponent to be able to block this. Even after you sacrifice one of the Treasure tokens, it's still only a 3/2. 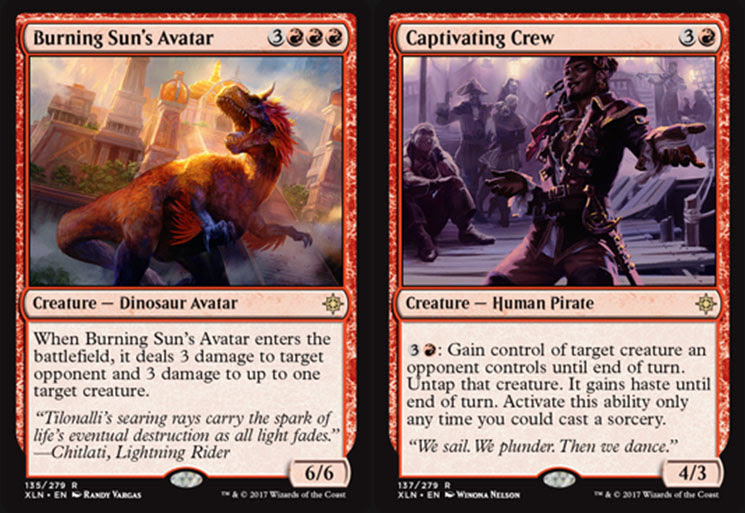 Burning Sun's Avatar: That is a really good entrance. It doesn't fly, and it doesn't get big, though.
Captivating Crew: That's pretty good. It's a repeatable Act of Treason that is worth the extra cost. 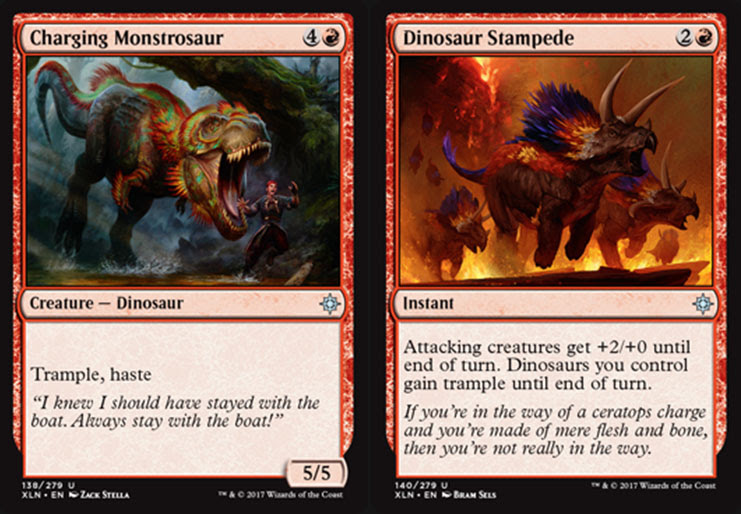 Charging Monstrosaur: Square (5/5 for 5) and solid, especially in Limited.
Dinosaur Stampede: Useful battle trick in at least Limited. It's a Dinosaur bonus, though, and that's the deck where it will go. 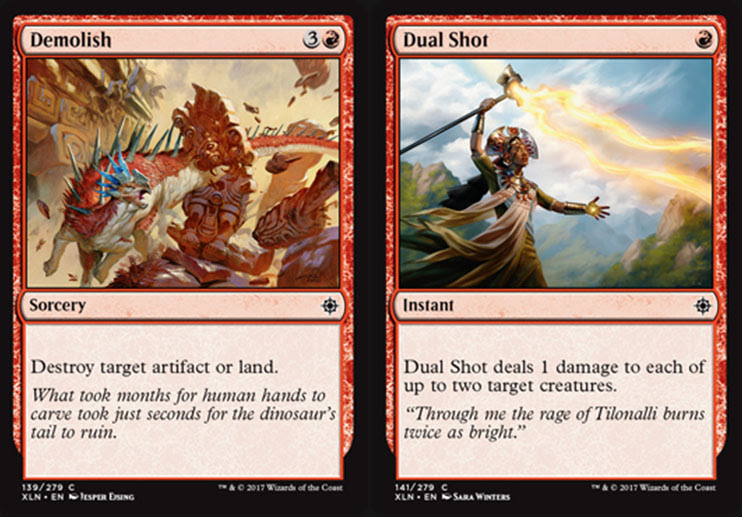 Demolish: Welcome back, old friend.
Dual Shot: A great way to Enrage your own creatures before they attack. 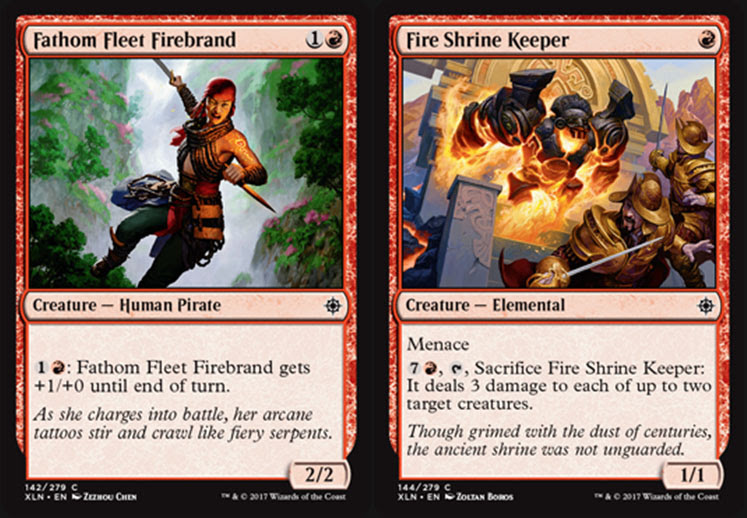 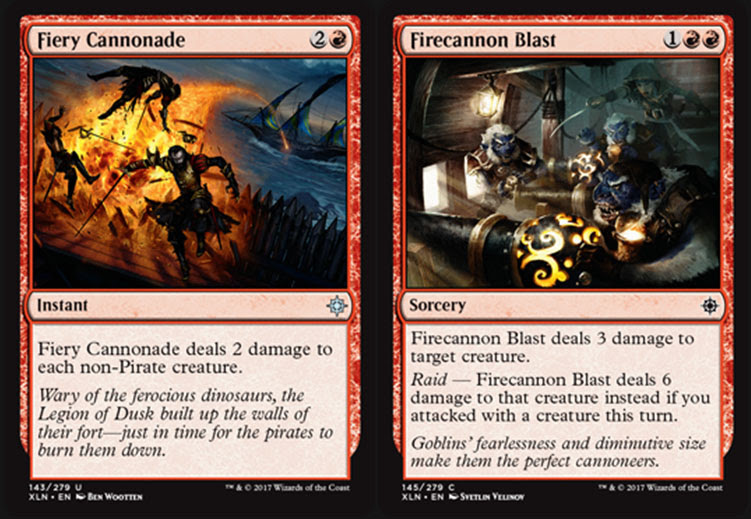 Fiery Cannonade: I would use it to Enrage all of my critters in a battlefield with my opponent controlling no Enrage creatures. Well costed for early game cleanups.
Firecannon Blast: Made for Limited. 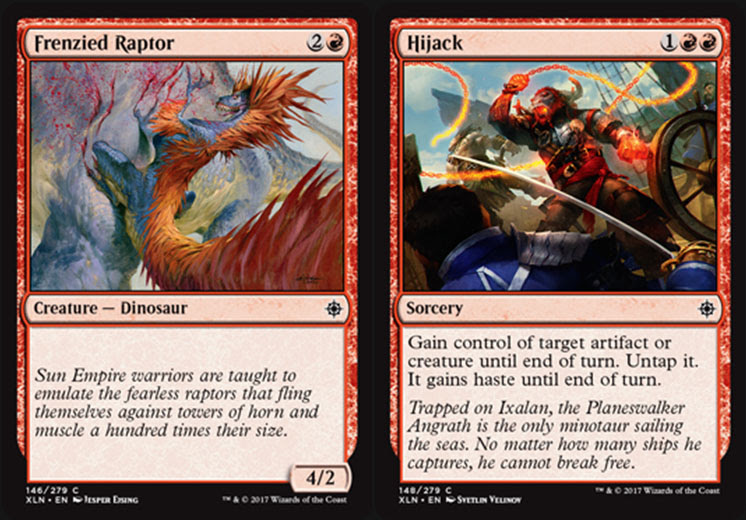 Frenzied Raptor: Made for Limited.
Hijack: A more versatile Act of Treason, and reprinted from Kaladesh, 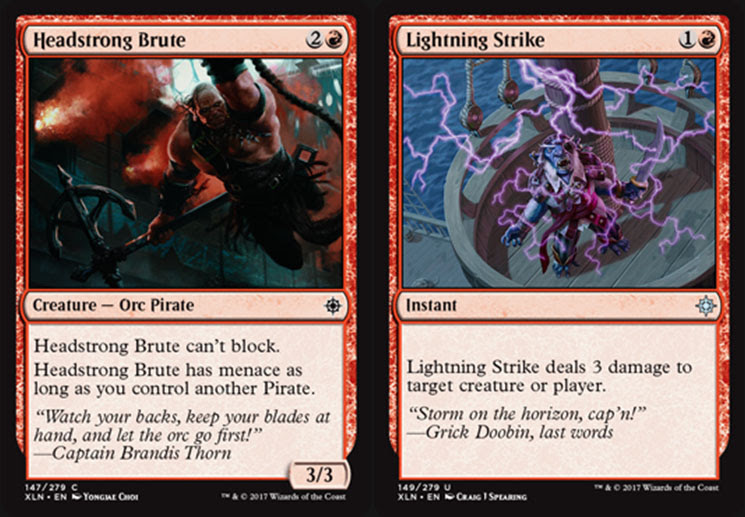 Headstrong Crew: Square (3/3 for 3) with a benefit. Should be a solid include in a Pirate deck.
Lightning Strike: Lightning Bolt would have been an amazing include, but this will do. Finally! Not a battlecruiser spell. 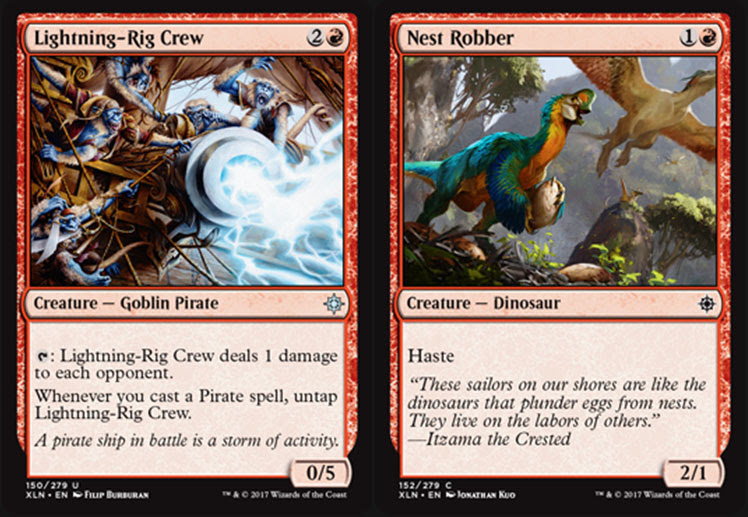 Lightning-Rig Crew: I love everything about it. I love the art, and its a Goblin. In a Pirate deck, you should be pinging many times with this. I would want to flicker Pirates again and again in a Red/Blue deck with spells like Siren's Ruse (in this set).
Nest Robber: Made for Limited. 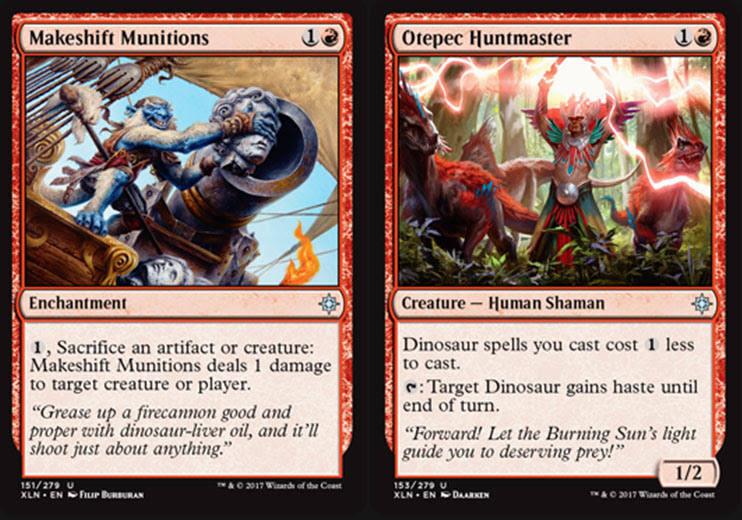 Makeshift Munitions: The Pirate Goblins are at it again. If I could get an assembly line between my graveyard and my hand, I could deal a lot of damage with this. I am not yet at the point where I will figure out how to break it. Any creature that can be cast from the graveyard is perfect fodder to repeat the ping multiple times in a single turn.
Otepec Huntmaster: Pretty cool Dinosaur enabler. I would love to cast two, and then my Dinosaurs are that much cheaper to cast. 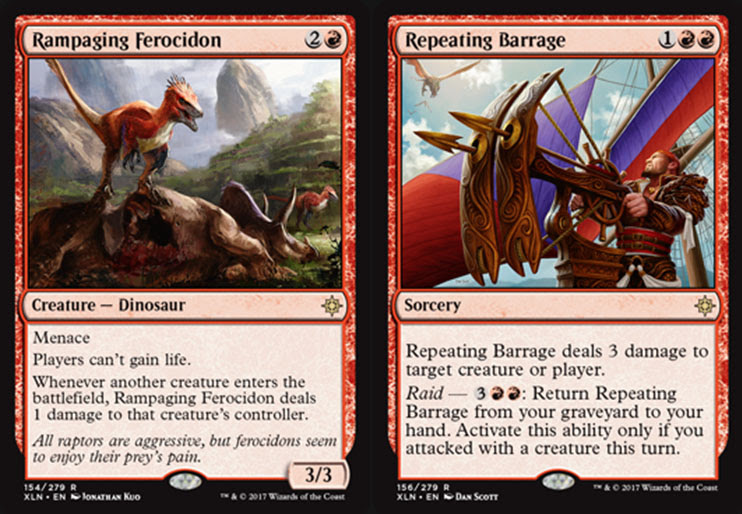 Rampaging Ferocidon: It will ping you too. It needs to be used with care. Menace is great. I wouldn't one four of these on the board if I was losing the game.
Repeating Barrage: "or player" Thanks, Wizards. We need more of these. Reads like a must have for aggro creature-heavy decks. 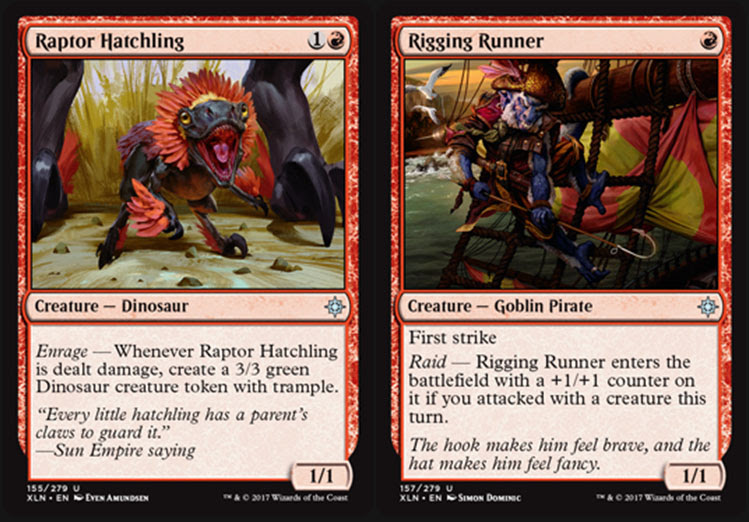 Raptor Hatchling: Oh yeah, this is the Enrage creature we need. This is a nod to Hearthstone's Angry Chicken. I need to buff it up first, and then start pinging it for tokens. Awesome, so awesome. This is my favorite card of the set, and I haven't even looked through the Green, Multicolored, and Artifact Creatures yet!
Rigging Runner: Great one drop for the Pirate deck. 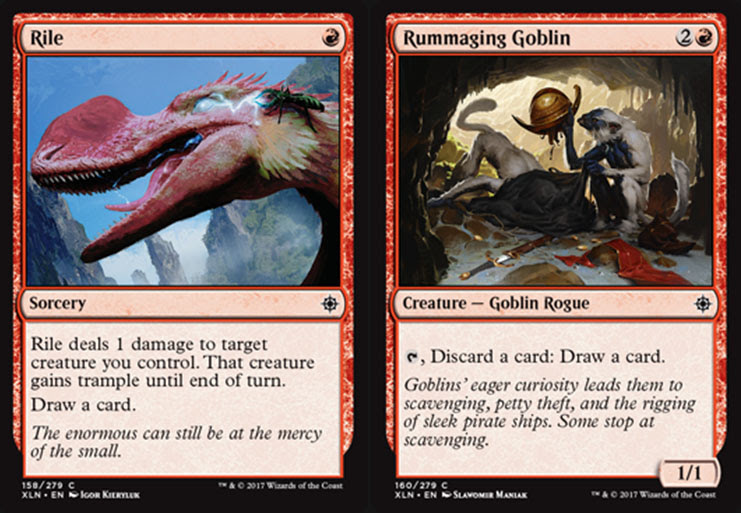 Rile: Another Enrage enabler. Oh, and you get to draw a card. This is really good.
Rummaging Goblin: Meant for Limited. 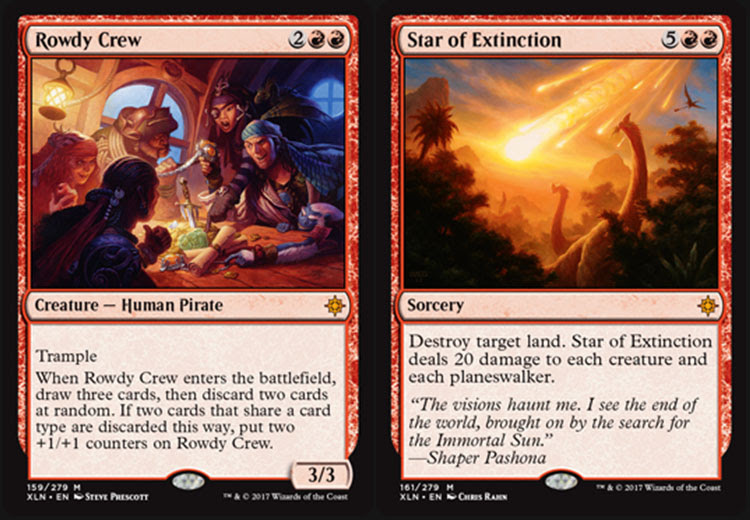 Rowdy Crew: Reads like a junk Mythic, even it's making me think. You are discarding at random and you are not Scrying a lot in this set. If you know what you are drawing, that's another story. You draw three lands with an empty hand and this becomes 5/5, which would be awesome. Yeah, this reads too wacky to be useful.
Star of Extinction: Another improbable EDH spell. It cleans out ALL creatures and planeswalkers, including yours. If you only have vehicles on the battlefield, though, you are safe. 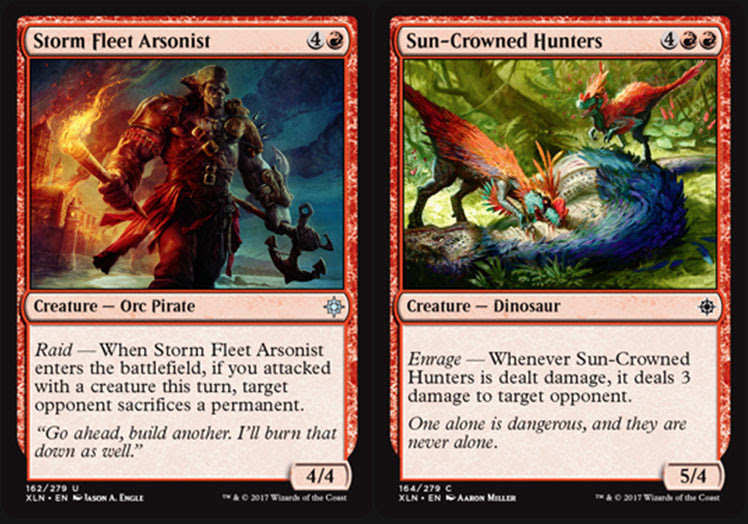 Storm Fleet Arsonist: Solid. I would make sure I have taken out all non-land permanents before I cast this, and then it can go for the lands.
Sun-Crowned Hunters: Reads solid in Limited, especially if you have ways to ping it. 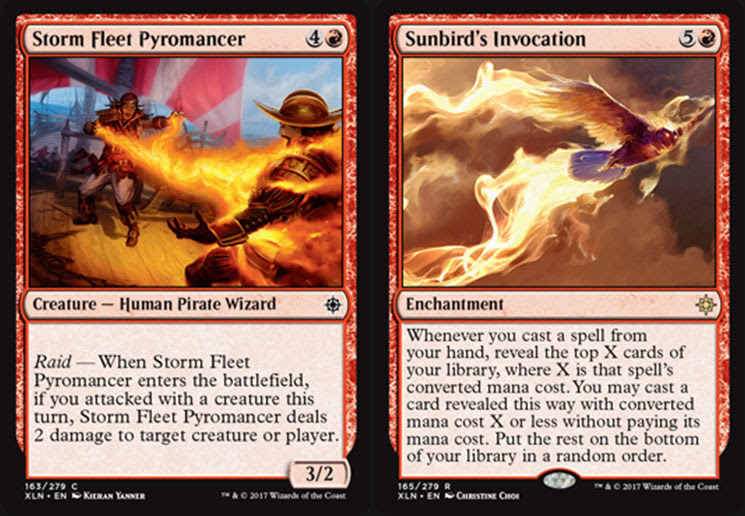 Storm Fleet Pyromancer: Meant for Limited. It does read "or player," and that is such a welcome change from just hitting creatures and not players in classic battlecruiser.
Sunbird's Invocation: In the great tradition of 'wall of text' junk rares. It's similar to repeatable Cascade: "When you cast this spell, exile cards from the top of your library until you exile a nonland card that costs less. You may cast it without paying its mana cost. Put the exiled cards on the bottom of your library in a random order." I like it a lot, except it's a six drop. You should have won the game by the time you can cast this, especially in Red. 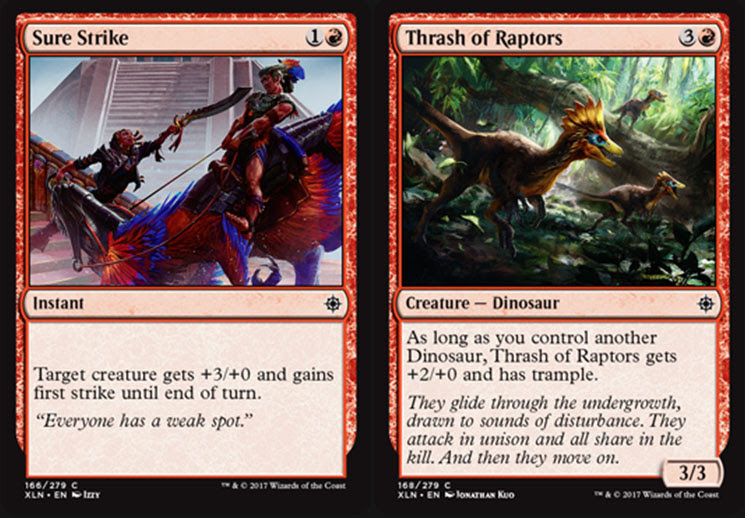 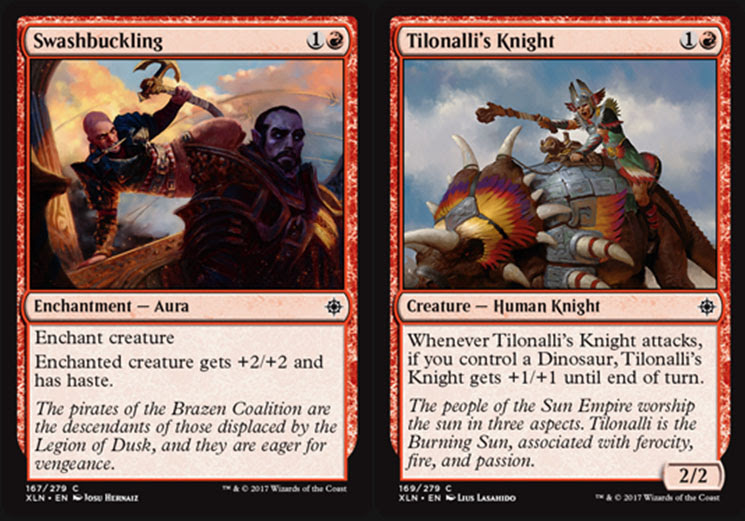 Swashbuckling: Functional reprint of Goblin War Paint and essential in an Enrage deck.
Tilonalli's Knight: Solid in Limited. I will not want to lower my Dinosaur count in constructed for this. 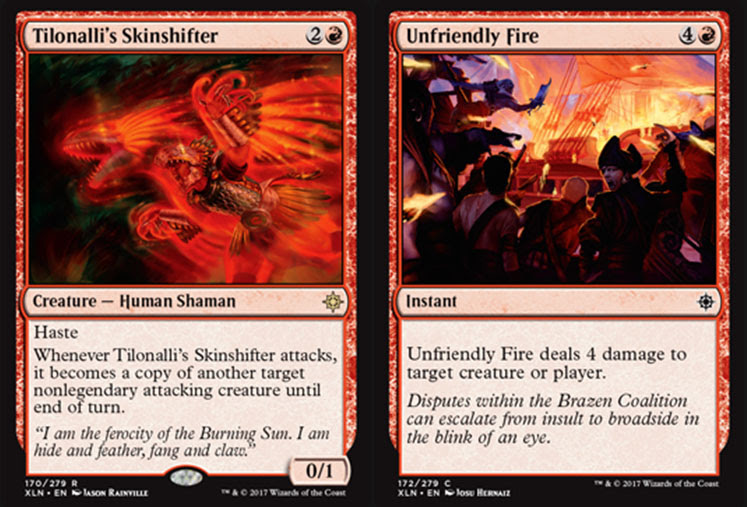 Tilonalli's Skinshifter: That's pretty good assuming you have at least one solid beater on the board. It's a really cool design and expands Red's versatility. It's really a Red Phantasmal Image (Phantasmal Image 1U You may have Phantasmal Image enter the battlefield as a copy of any creature on the battlefield, except it's an Illusion in addition to its other types and it gains "When this creature becomes the target of a spell or ability, sacrifice it.") This set is so much stronger than the battlecruiser sets since and including Theros (with the exception of some of Khans of Tarkir block)!
Unfriendly Fire: It deals 1 less damage than Lava Axe, yet it has the versatility that now you can hit a "creature or player" instead of just "player." 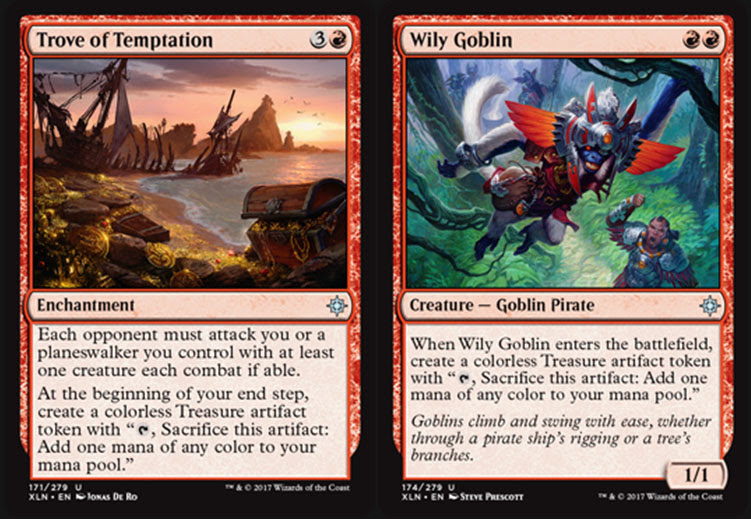 Throne of Temptation: I would have no planeswalkers, play this with Black and every imaginable creature removal to only have the second clause be valid. Alternatively, in Modern, I would put this in a prison deck in which my opponent was not able to attack with their creatures even if they had them.
Wily Goblin: It's better than the same card minus one mana casting cost and no ETB clause because you can spend that extra mana to access spells in other colors. The Treasure tokens are there to be a substitute for supporting additional colors in your mana base.
Posted by Rubiera