This set is getting lots of hype. I hope it's real. 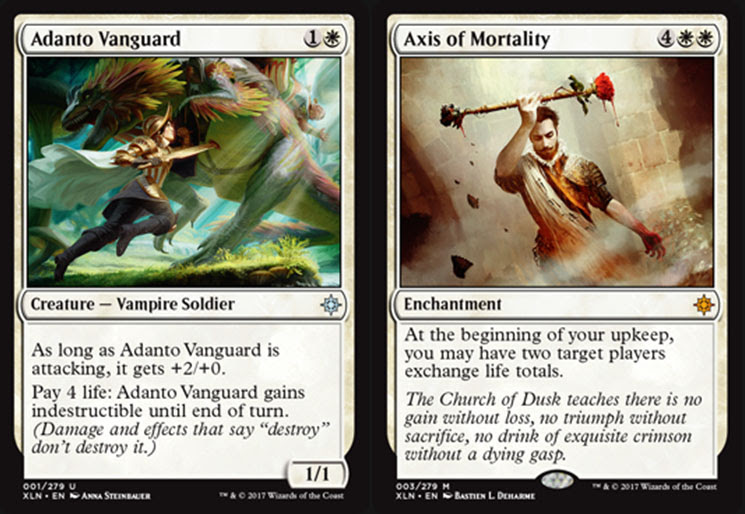 Adanto Vanguard: The cost to protect it is a little steep, but it could be worth it depending on how the game has evolved.
Axis of Mortality: Because EDH. It's awesome that you can do it every turn. It should allow you to take out your opponents one by one. If you are getting your butt kicked, you can exchange life totals with the player doing best. 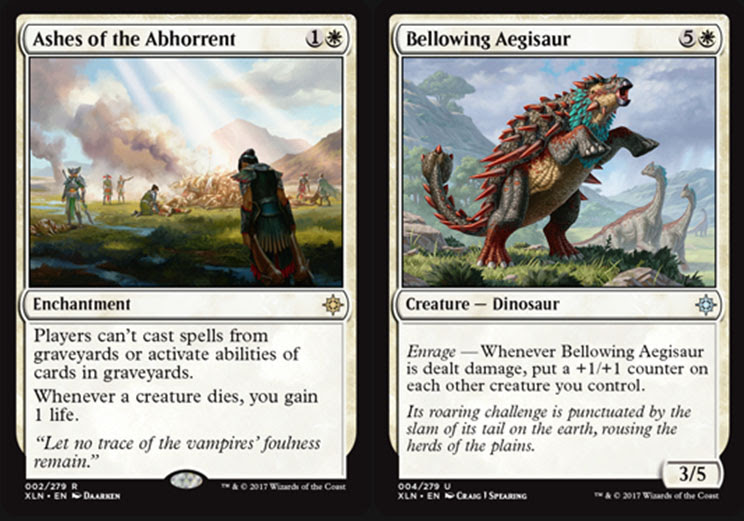 Ashes of the Abhorrent: Grafdigger's Cage's effect on an enchantment. I am sure there are Legacy and Vintage decks that will want this. It also allows you to play a second Grafdigger's Cage in EDH, although I am not sure how useful that would be in that format.
Bellowing Aegisaur: Enrage needs a card that hits every creature for 1 damage, and then you can Enrage all your Enrage creatures. That's how it works in Hearthstone. I hope Standard includes such an effect, and I will be sure to notice it if it's on a card in this set. The benefit is to your other creatures, and it's to all of them at once. That could be a huge bonus. The counters stick around; that's really strong even at six mana. 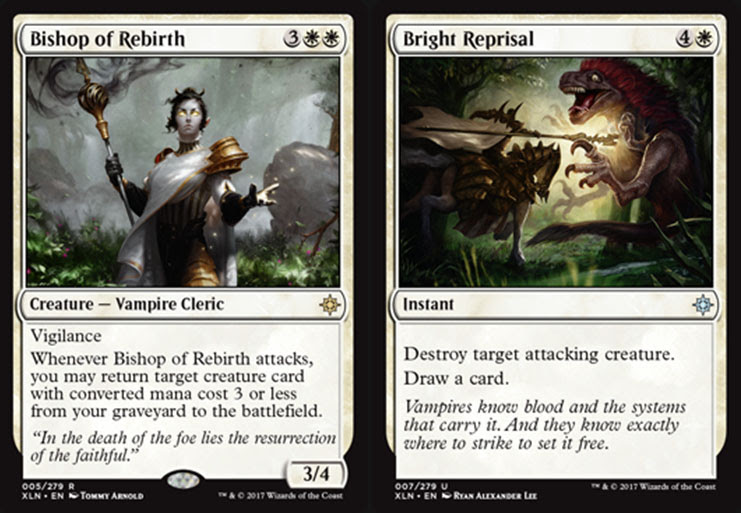 Bishop of Rebirth: I would buff it somehow to make sure it's enough of a beat stick to allow me to hit with it for as many turns as it is on the board. By the time you can cast it you should have some creatures in your graveyard, maybe drop them there on purpose since you are not spending any mana to get them out of the graveyard.
Bright Reprisal: That is too heavy a price to pay to destroy an attacking creature. A much better cost is two or three mana. I guess draw a card in White is worth two to three mana. 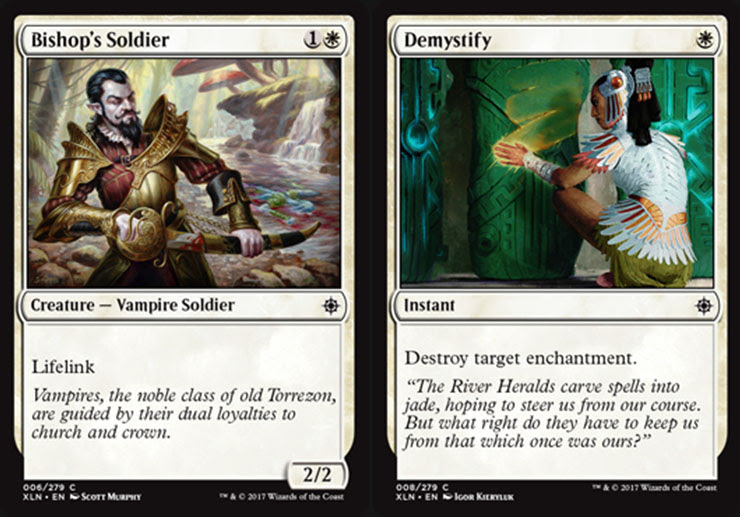 Bishop's Soldier: Great common, in a set that looks to be packed full of great commons (what a wonderful development!!!). Square + Lifelink: what is not to like? At common? Simply amazing.
Demystify: An old friend from the core sets, beginning with 8th Edition. Much better in your sideboard. 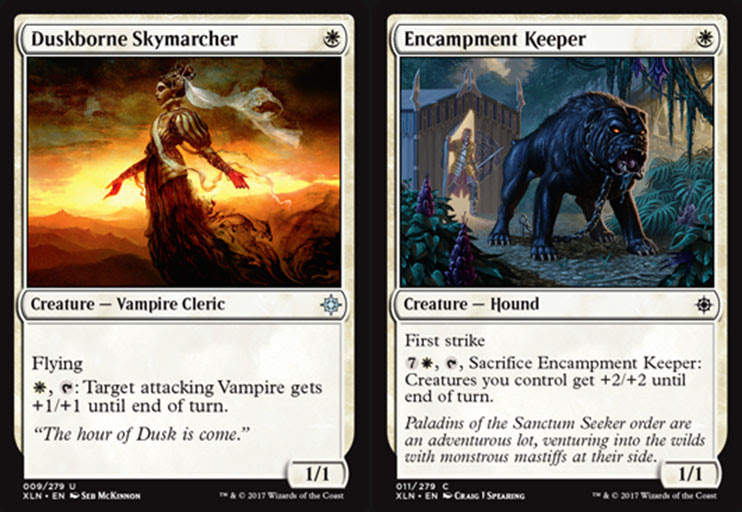 Duskborne Skymarcher: A superb uncommon. A square flyer that can buff a bigger creature.
Encampment Keeper: I am not a fan of this type of card. It almost never survives late enough for the mana ability to be useful. It is great to draw it late game, though. 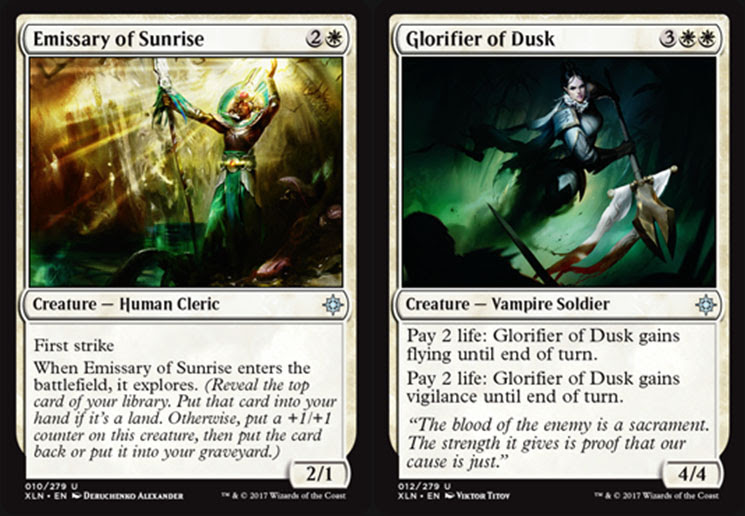 Emissary of Sunrise: I love this ability. It is so versatile. It allows you to get a land or know what nonland card you are drawing next turn, and if you want to drop something useful in your graveyard, you can do that too. Filtering lands off the top of your deck is really good. How about a deck with a bunch of Aftermath cards? You can ditch those to your graveyard to keep drawing lands for free.
Glorifier of Dusk: Not bad. In a lifegain deck you will not feel the life loss too much, and you can make it a Flyer and give it Vigilance at the same time. It reads on the weak side, though, since you are spending life on it turn after turn if you want the benefits. 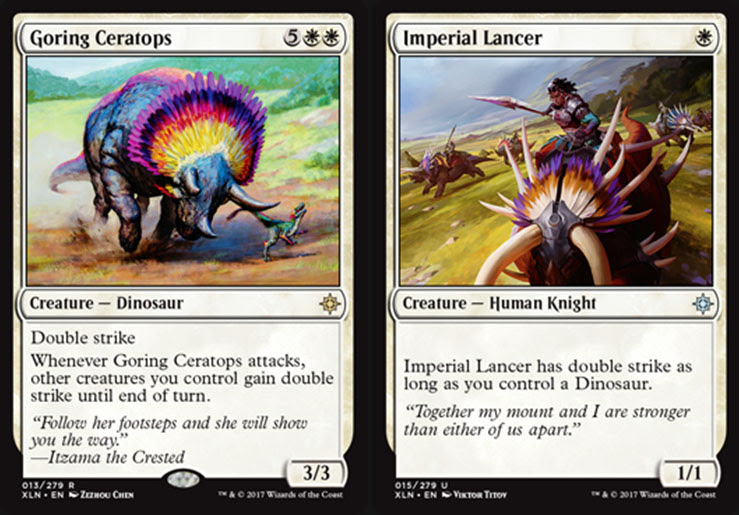 Goring Ceratops: Come in too late in any format other than EDH. Once it does, though, you will be in great shape to steamroll your opponent.
Imperial Lancer: Great Dinosaur support. Otherwise, a square one drop. 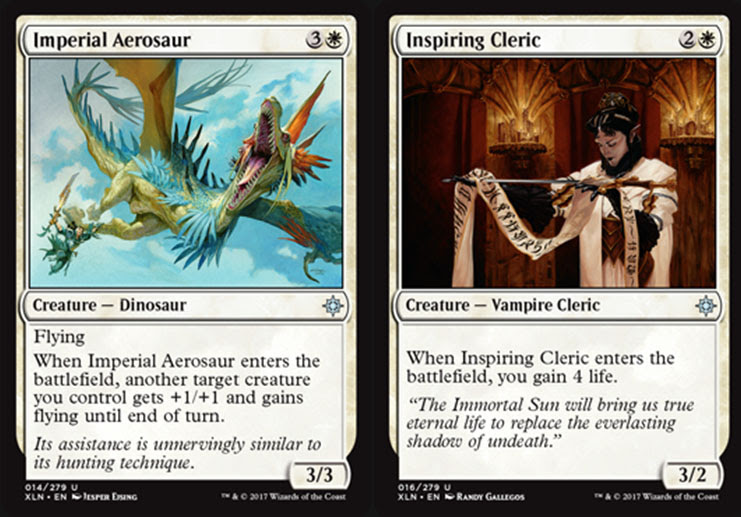 Imperial Aerosaur: Nice one-time bonus. Reads on the weak side, yet it's a flyer for Limited.
Inspiring Cleric: Reads like a common. I am not a fan of lifegain 'just because' and is always a defensive target that delays the inevitable loss, unless lifegain is the strategy of your whole deck and you have some sweet lifegain triggers. By itself, it reads like a common. 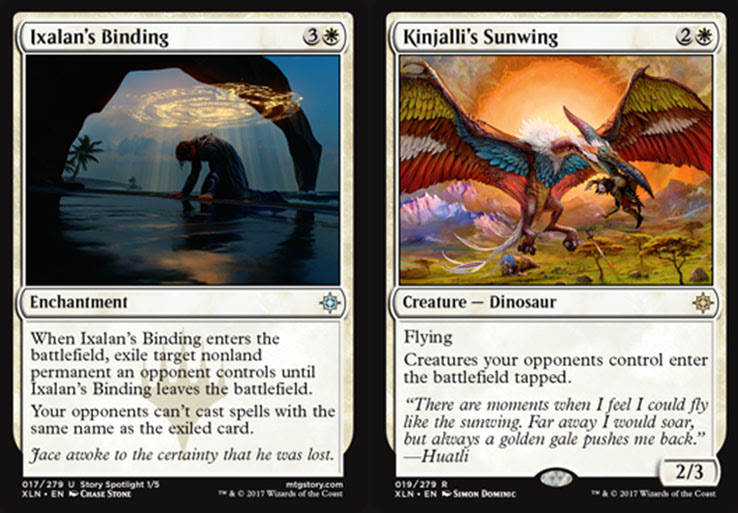 Ixalan'd Binding: A bit too heavy for the interim exiling benefit, yet in constructed it can stop a whole playset of something, and that is simply awesome. It think this card is easy to underestimate.
Kinjalli's Sunwing: Solid card as a three-drop. Not only is it a flyer, it's a tax card. Against a fast-swinging deck, this is a powerhouse card. Kinjalli's Caller: Sweet wall while you wait to cast your big Dinosaurs. And it's a common!
Legion Conquistador: A one mana heavier Squadron Hawk. That's awesome. Well, except it doesn't fly. 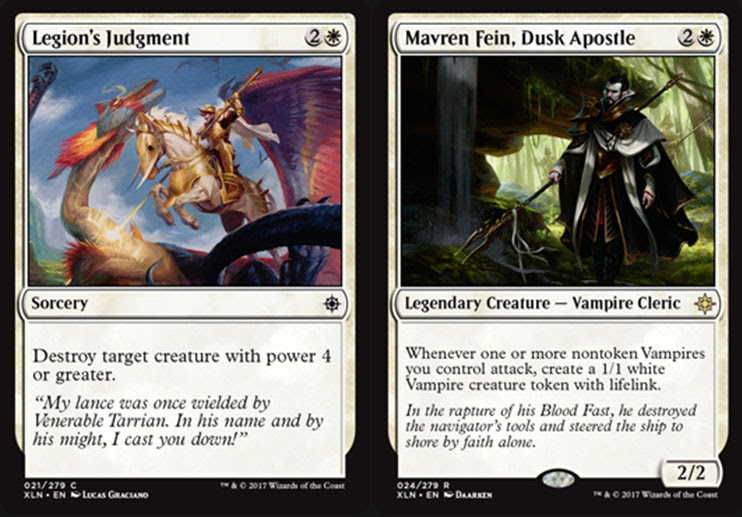 Legion's Judgement: Smite the Monstrous for one less mana? Wow, this has to be the first card that has been downcosted during the battlecruiser, or Theros+ era. Could this card signal the end of the battlecruiser era? I hope so!
Mavren Fein, Dusk Apostle: Tricky. There are many ways to drop Vampire tokens, and none of those yield a benefit here. You will get your token, but you will have to attack with non-token Vampires to get it. That's not bad, but it lacks the 'wow' factor of a card like Geist of Saint Traft. 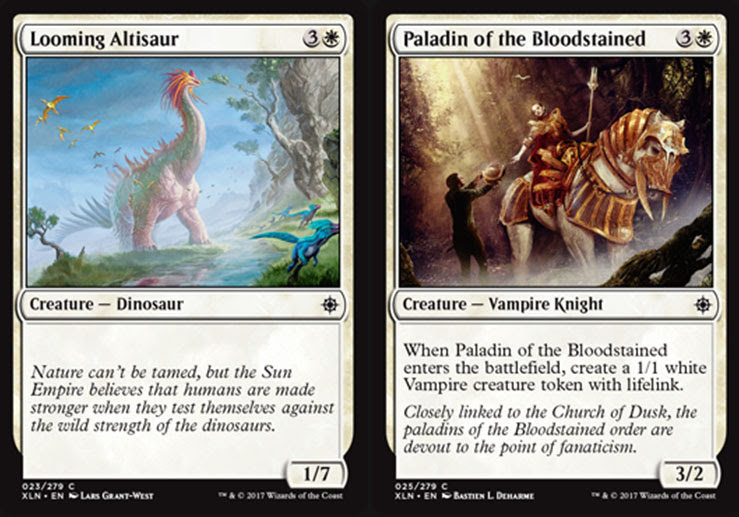 Looming Altisaur: Big butt to help you wait to cast your big Dinosaurs. It should be useful in Limited.
Paladin of the Bloodstrained: That's not bad for a common. You will need that extra creature in Limited. Compare with the much stronger Master Splicer from New Phyrexia (3W When Master Splicer enters the battlefield, create a 3/3 colorless Golem artifact creature token.
Golem creatures you control get +1/+1.) 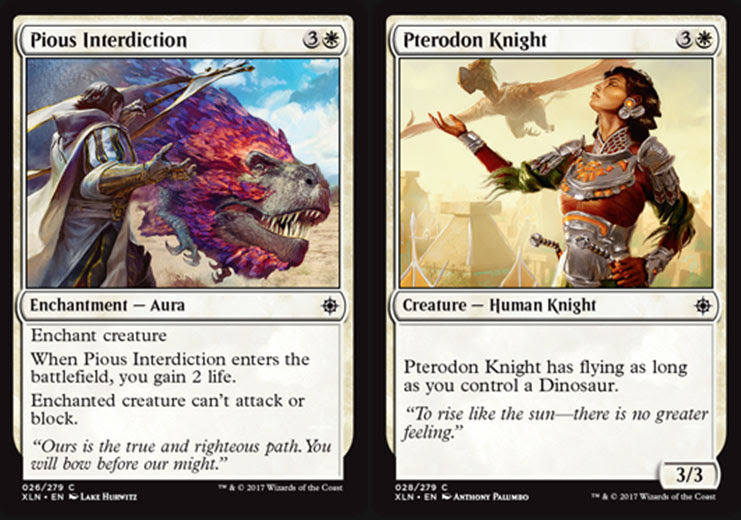 Pious Interdiction: (Cool artwork!) Two more mana for Pacifism and all I get is 2 life? I am not excited.
Pterodon Knight: Geared for Limited. 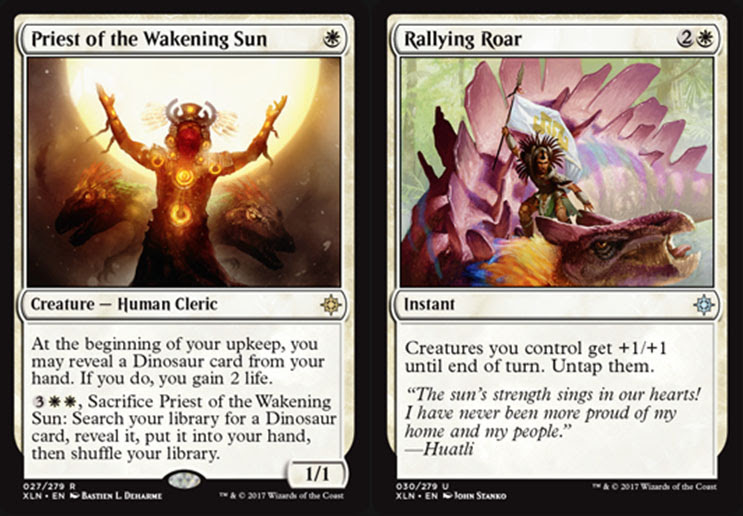 Priest of the Wakening Sun: You still have to cast that big DInosaur critter for whatever it costs after you paid five mana to tutor it. Reads Timmy all the way since it lets you gain small pops of life while you wait to cast your big critters.
Rallying Roar: A little heavy, but it's an instant, and it's a sweet battle trick. It's one more mana than Glorious Charge for the same effect yet that may make the additional effect to untap your creatures worth it. I like it, it's a battle trick that makes you think. 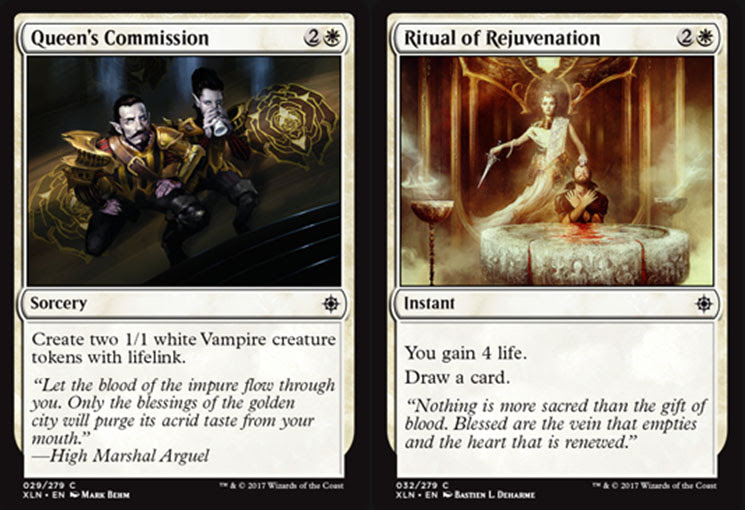 Queen's Commission: I am a sucker for the Velazquez-like art. Reasonable token maker.
Ritual of Rejuvenation: Designed for Limited. 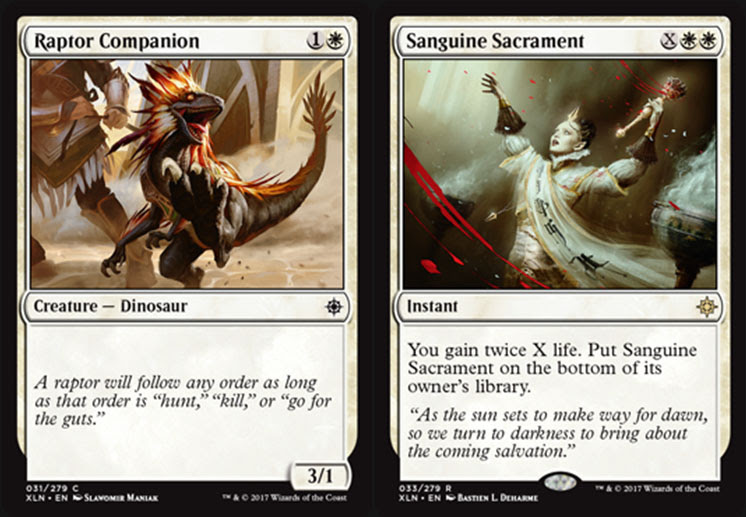 Raptor Companion: Limited vanilla creature. I so want a Vanilla matters ability in the future!
Sanguine Sacrament: I am not sure the 'gain a ton of life with your unused mana' spells are any good. Sure, you can use this to pump Voracious Wurm (1G Voracious Wurm enters the battlefield with X +1/+1 counters on it, where X is the amount of life you've gained this turn.), but Heroes' Reunion works just fine (GW Target player gains 7 life.). X=1 is three mana for six life. X=2 and higher is solid, though. It does go well with Aetherflux Reservoir, sure. 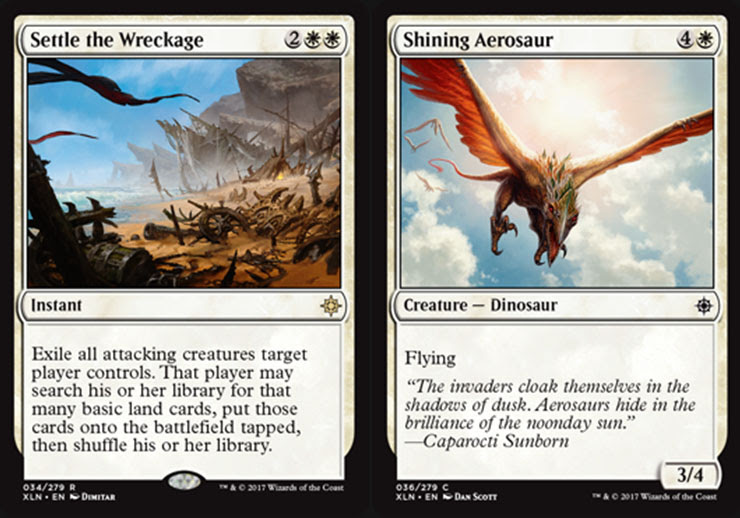 Settle the Wreckage: Against specific battlefield configurations, this card is really powerful, especially if you win the game with this effect. In that case, any lands you give your opponent will be useless. It must be used with great care. If your opponent has some gas in their deck, you could go from about to win the game to losing the game. It's an instant, and that's what makes it so powerful when used correctly.
Shining Aerosaur: Limited. 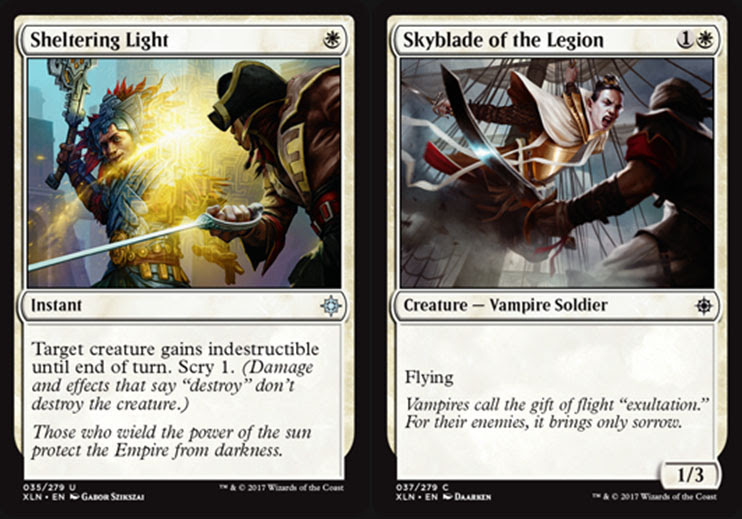 Sheltering Light: Solid battle trick to save a creature from targeted removal.
Skyblade of the Legion: Limited. 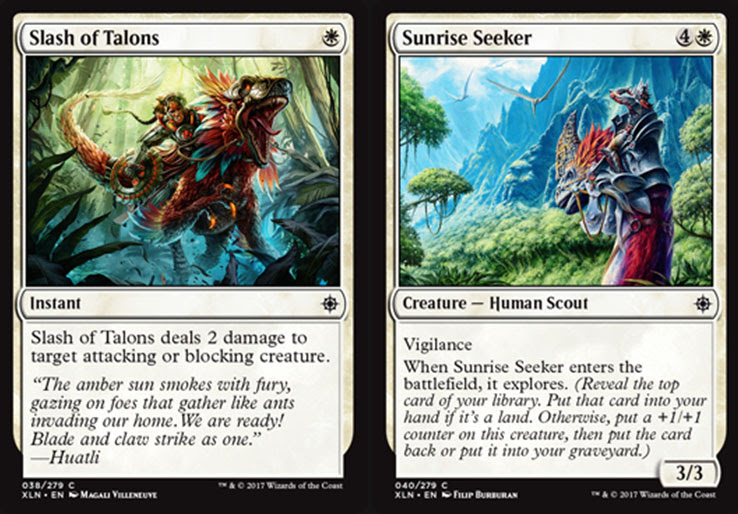 Slash of Talons: Solid battle trick, especially in Limited.
Sunrise Seeker: Love the explore effect. I love that it's on a common too. 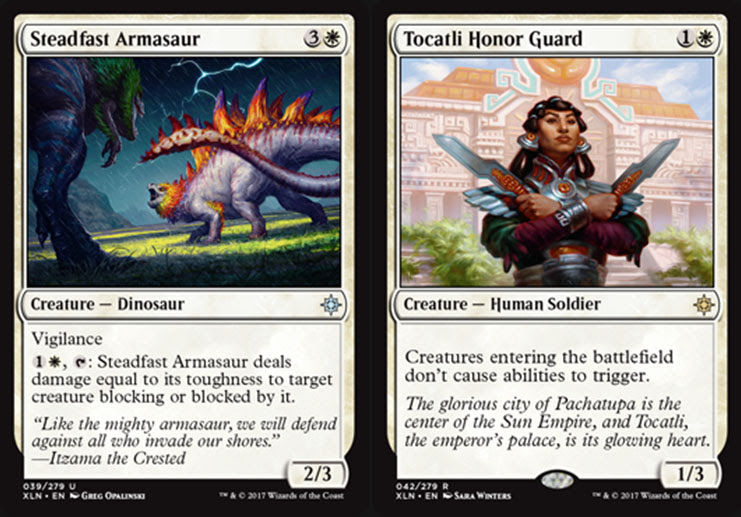 Steadfast Armasaur: I want to buff it to give it more toughness and the cost to swing is low.
Tocarli Honor Guard: Sweet ETB (Enters the Battlefield) hoser. I see the elements of a solid Death and Taxes deck in Standard. 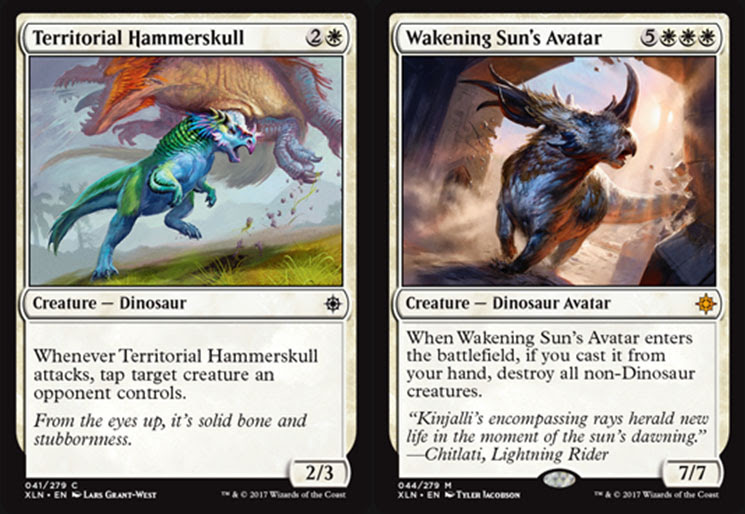 Territorial Hammerskull: Solid in Limited.
Wakening Sun's Avatar: The Timmy in me, however repressed, is giddy as a schoolgirl. Drop this to wipe the board. Of course, if your opponent has Indestructible creatures, this is not so good, but that's not something that is common enough to downgrade how good this card is. 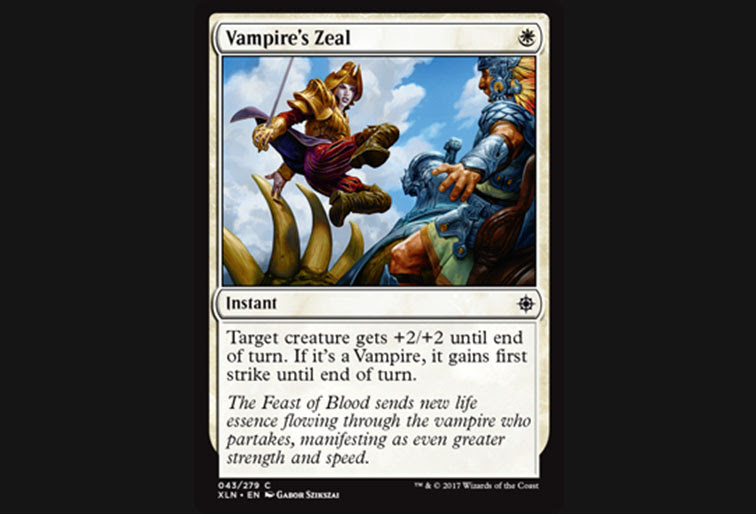