Let's take a look at all those Timmy Dinosaurs. 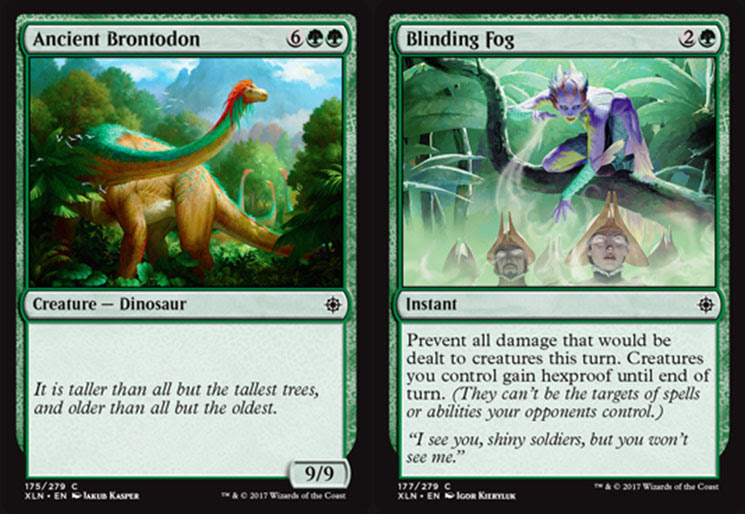 Ancient Brontodon: A Vanilla beatstick for my Timmy heart.
Blinding Fog: Great board wipe prevention if you remember to leave mana open for it. 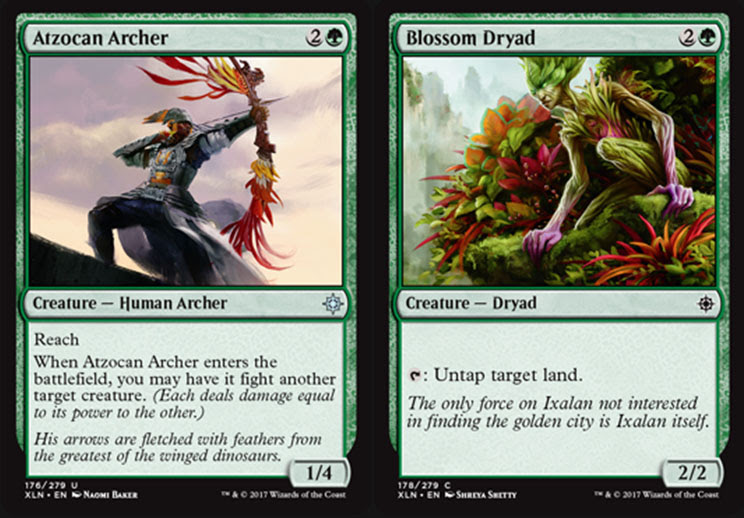 Atzocan Archer: A great way to take out any 1/1, 2/1 or 3/1 creatures before combat.
Blossom Dryad: Remnant of the battlecruiser sets. Compare with an early battlecruiser equivalent, Voyaging Satyr (1G 1/2 Tap: Untap target land.) 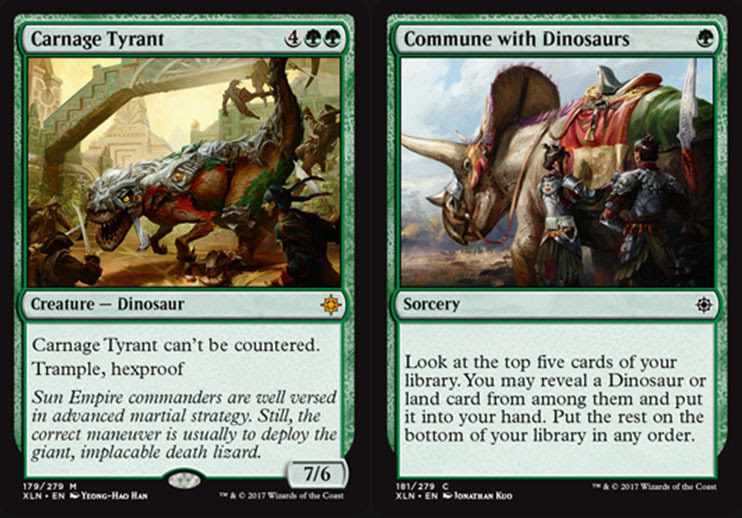 Carnage Tyrant: Beautiful. THE Dinosaur. One more card I want to add to my Legacy/Vintage 'can't be countered' deck.
Commune with Dinosaurs: Incredible filter. It's limited to Dinosaurs. The more general card is Commune with Nature, which does the same thing minus the specific creature limitation. 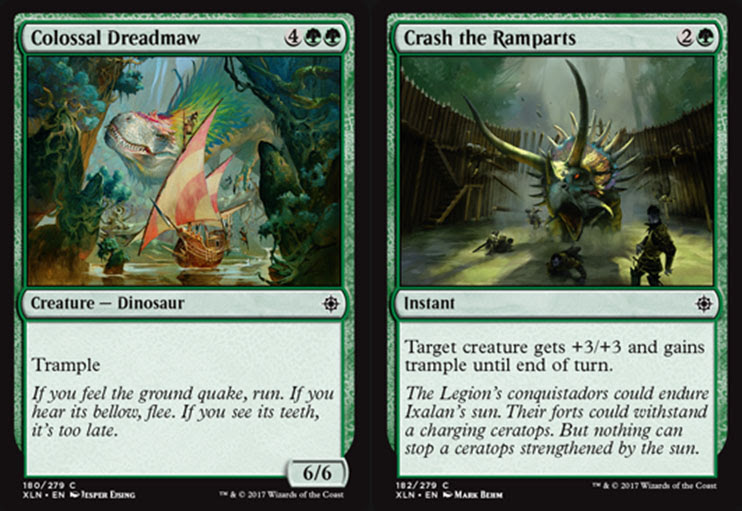 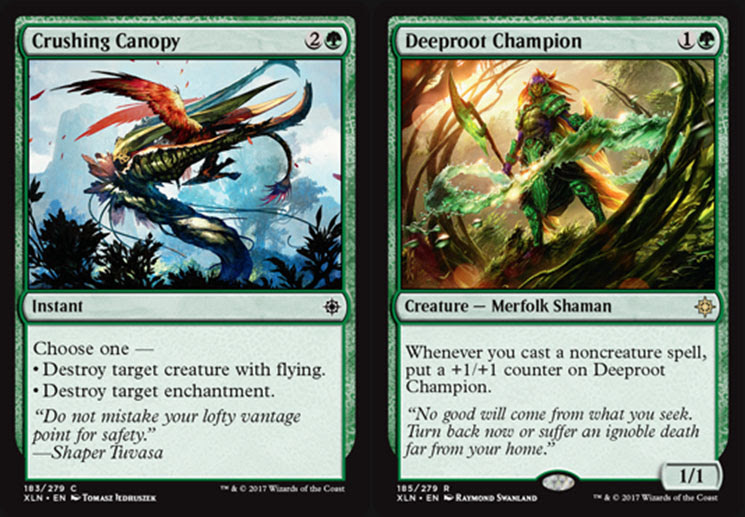 Crushing Canopy: Similar to Crushing Vines but with 'enchantment' being 'artifact' in the older card. Meant for Limited.
Deeproot Captain: That IS great! In a low creature deck, this can get many counters added. It doesn't just belong in a Merfolk deck. 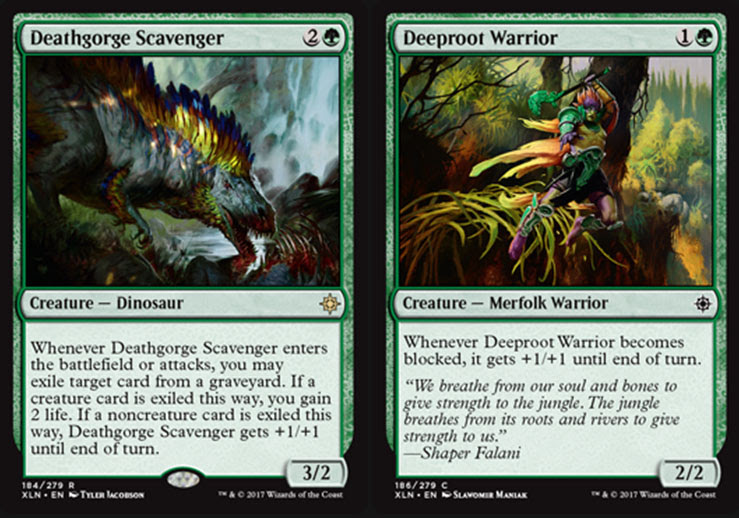 Deathgorge Scavenger: Unless the lifegain triggers some other 'when you gain life this happens' it is useless, and the +1/+1 is until end of turn. Reads like a junk rare.
Deeproot Warrior: Meant for Limited. 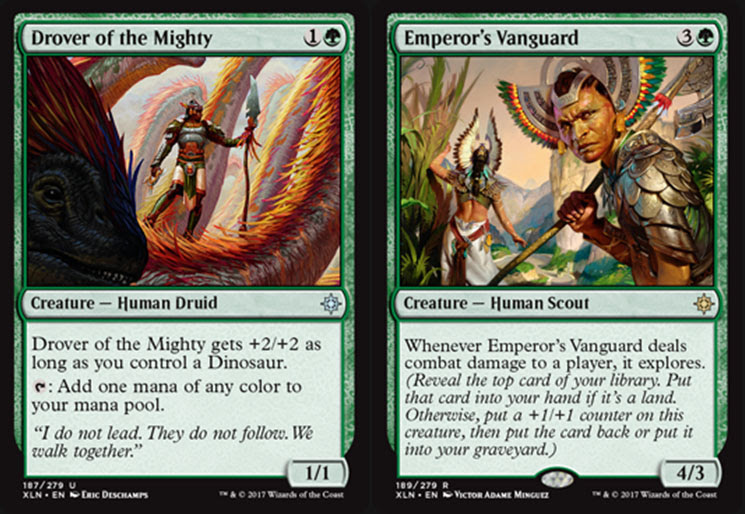 Drover of the Mighty: That's pretty good. It's no Bird of Paradise, yet it will play well in a Dinosaur deck.
Emperor's Vanguard: Cool artwork. I so want to make an explore deck. It comes in a little late, but that won't hurt in such a dedicated deck. 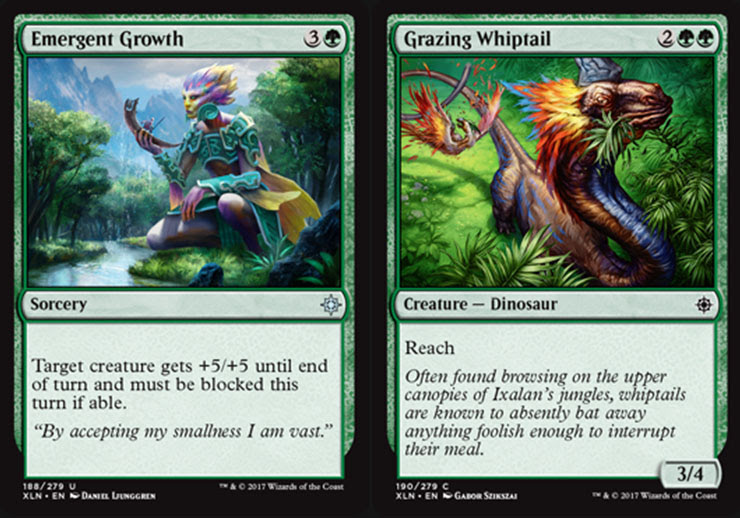 Emergent Growth: Battlecruiser addition to the "Growth" family. Giant Growth (1 mana, +3/+3) Monstrous Growth and Titanic Growth (2 mana, +4/+4). This one has the added text for 'must be blocked.'
Grazing Whiptail: Meant for Limited. 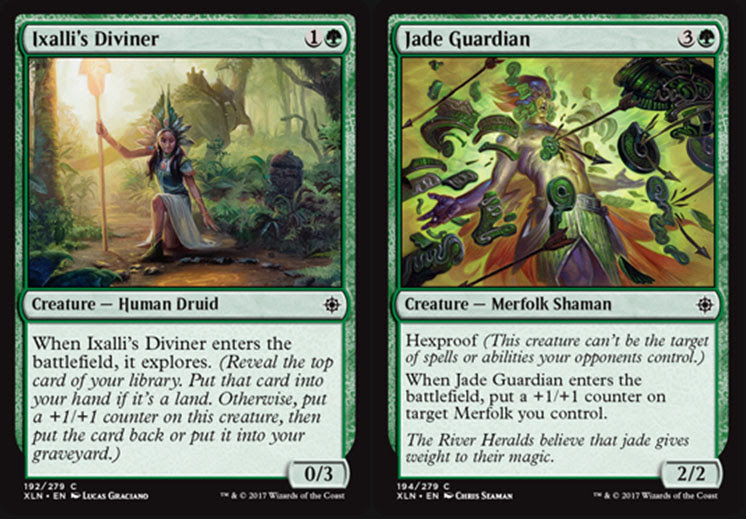 Ixalli's Diviner: I really have no way of knowing how all these explore cards will work out outside of Limited. They could flop, or they could be really fun, or, they could be surprisingly useful.
Jade Guardian: It reads like a Limited card, but tribal is difficult to pull off there. It does have Hexproof. I am sure I would add this card to a Standard Constructed Merfolk deck. 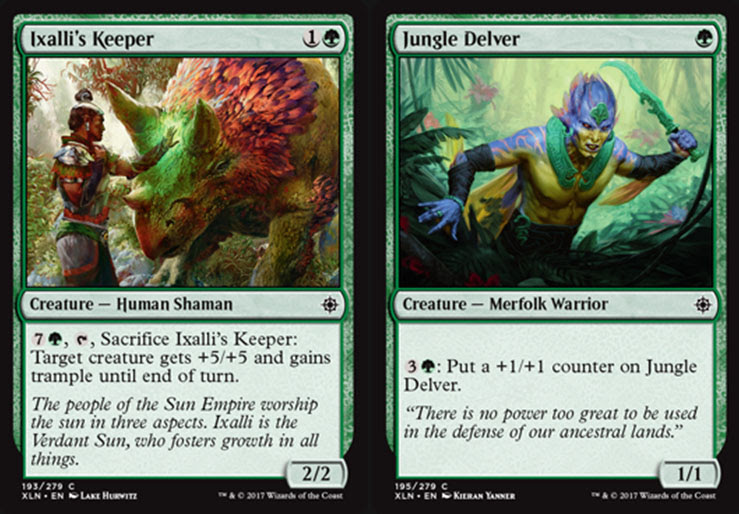 Ixalli's Keeper: Another in the series of low costing creatures with some gigantic mana ability. I don't expect any of these to be in the 'got to play it' category outside of Limited.
Jungle Delver: I hope I can make better use of my mana and don't have to throw it at this guy at the rate of four mana for a +1/+1 counter. That seems to be a very inefficient use of mana. 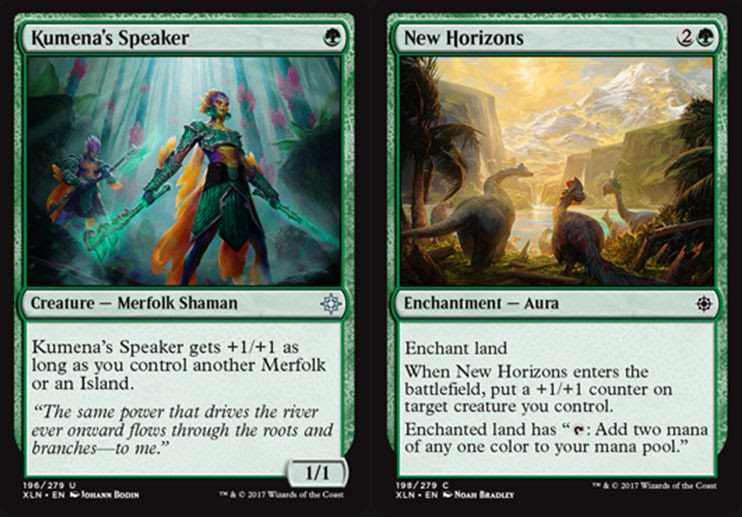 Kumena's Speaker: Solid one drop for the Standard Merfolk deck.
New Horizons: Another battlecruiser multiple effect overcosted card. It would be a lot better to have a one drop that does the mana part (Utopia Sprawl Enchant Forest As Utopia Sprawl enters the battlefield, choose a color. Whenever enchanted Forest is tapped for mana, its controller adds one mana of the chosen color to his or her mana pool (in addition to the mana the land produces).) 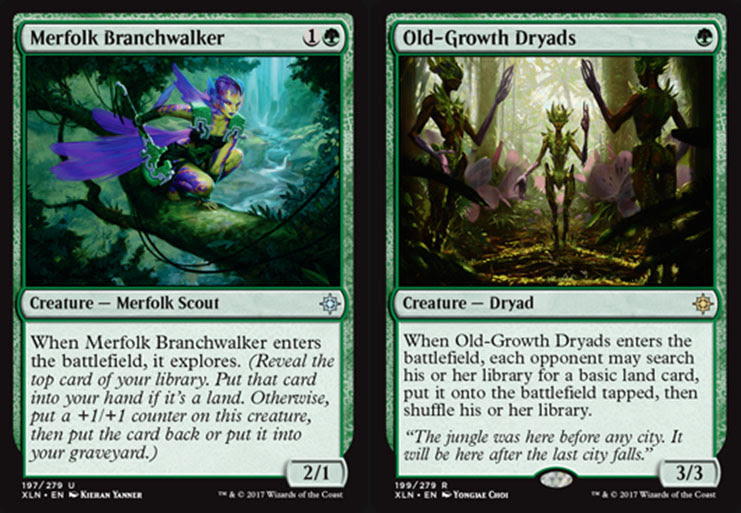 Merfolk Branchwalker: That reads versatile and like an auto-include in the Standard Merfolk deck.
Old-Growth Dryads: Interesting. You could wind up enabling your opponent's mana base more than you want to. 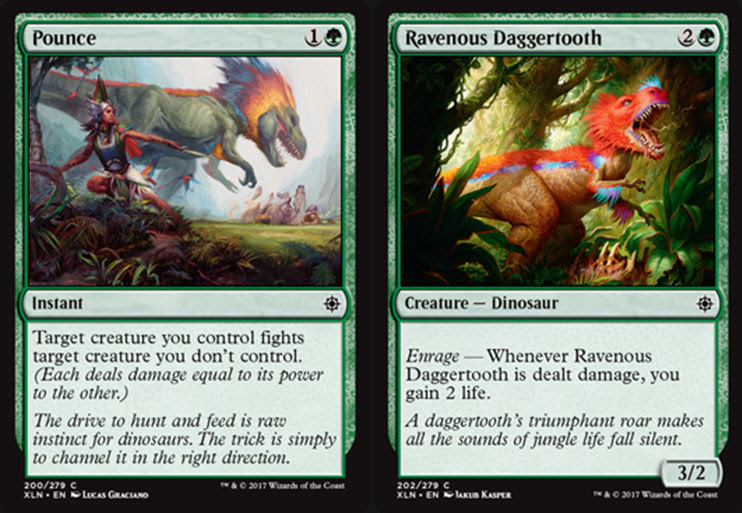 Pounce: In the family of Prey Upon and Savage Punch. It's well-costed.
Ravenous Daggertooth: Meant for Limited. 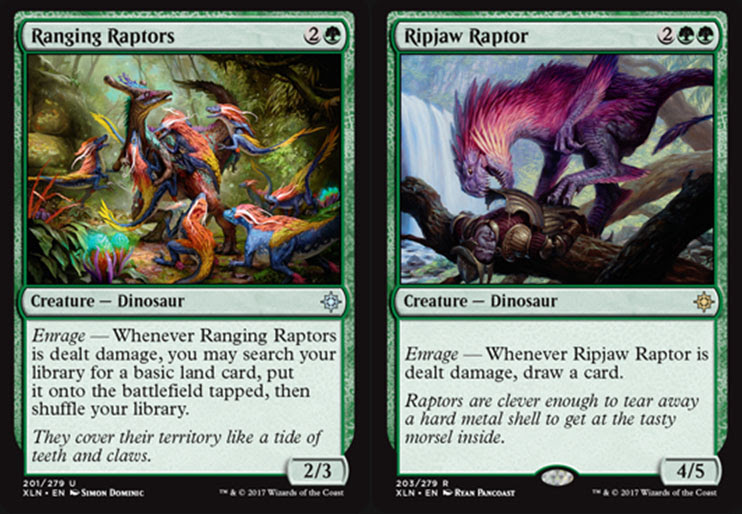 Ranging Raptors: That is one awesome Enrage effect. You filter your deck and you get a basic land card.
Ripjaw Raptor: 'draw a card' for Enrage, now we are in business. This is an awesome card... so awesome. Buff it, and ping it multiple times. 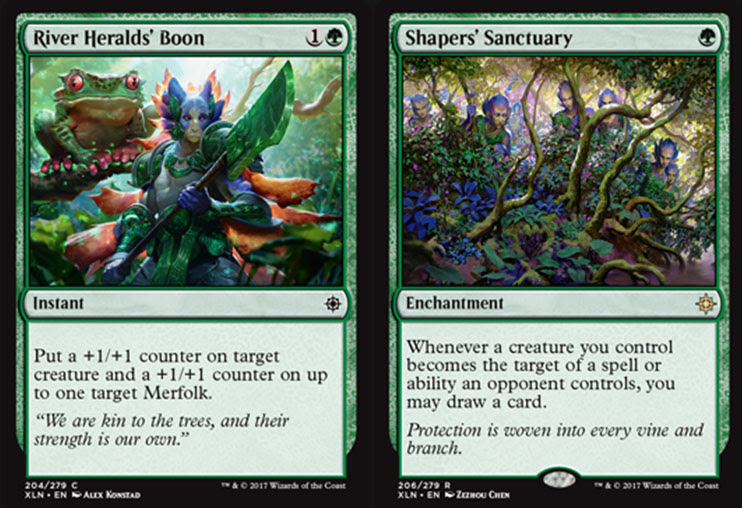 River Heralds' Boon: Solid in Limited.
Shapers' Sanctuary: That is one strong deterrent. I want to play it. It could be pesky enough that it will force opponents to remove it as soon as it comes in. 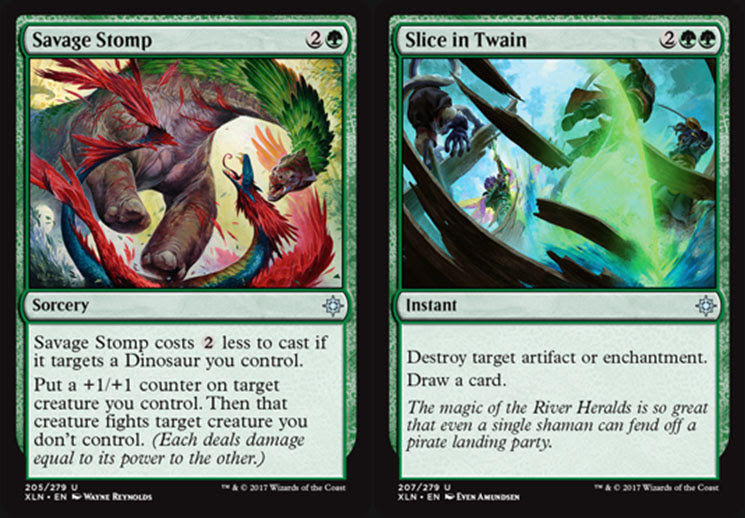 Savage Stomp: This is one sweet Enrage trigger for the Dinosaur deck.
Slice in Twain: Reprint from Scars of Mirrodin. Drawing a card is almost always great. 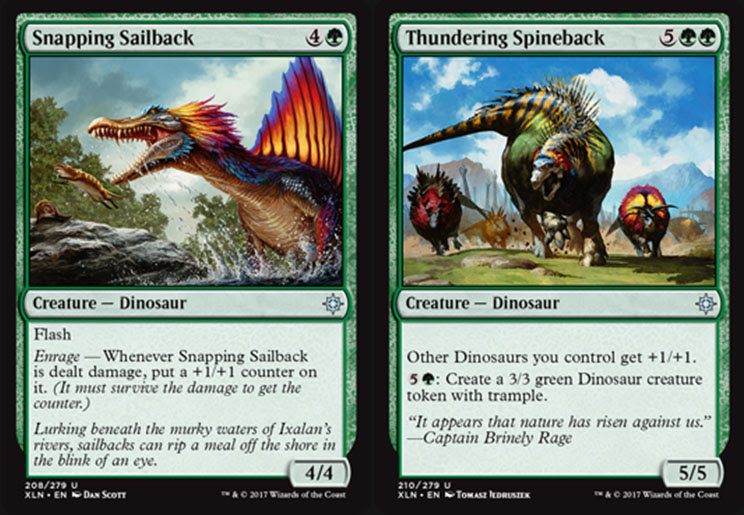 Snapping Sailback: The Enrage bonus is small. Let's see how many times it is possible to trigger Enrage on this one.
Thundering Spineback: Not that efficient. The lord ability on a seven drop is kind of useless, and six mana for a 3/3 is not that great either. 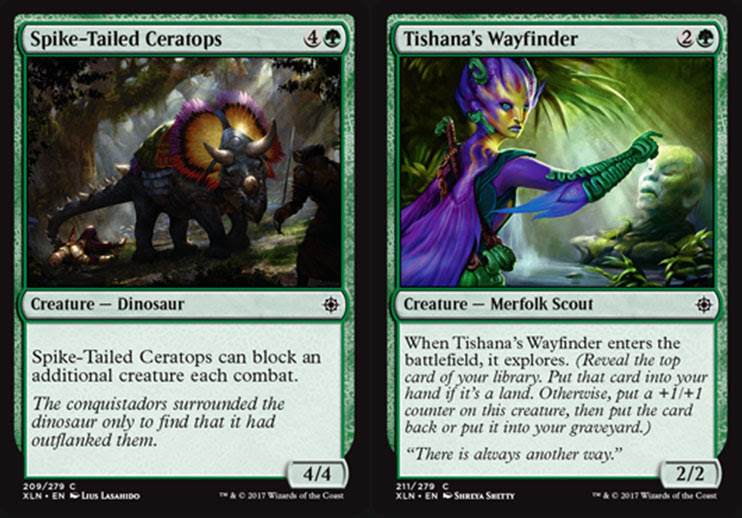 Spike-Tailed Ceratops: Meant for Limited.
Tishana's Wayfinder: When is the explore bonus worth the downgrade in P/T? Early game, getting lands is really good and you are filtering them out of your deck. Late game, you don't want to be getting lands. It looks like a graveyard matters deck will benefit from many of these explore cards. 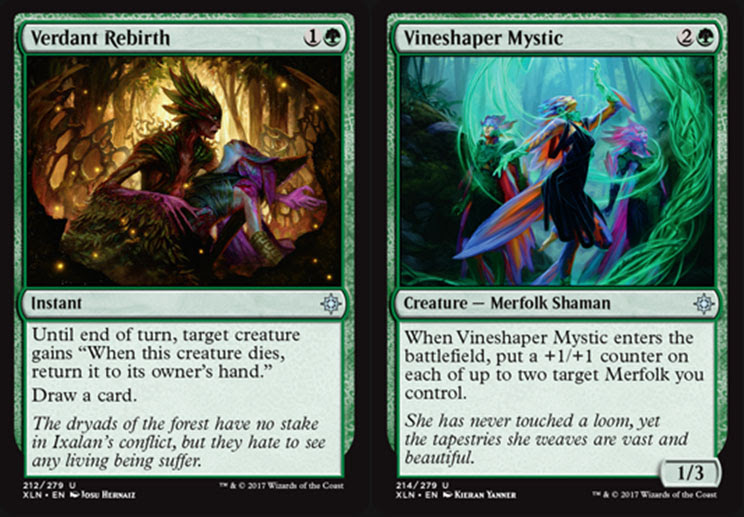 Verdant Rebirth: A great way to recover something special that is about to be removed. It says 'draw a card,' and I better remember that.
Vineshaper Mystic: A helper Merfolk. I am sure it will be useful in standard. It allows you to decide how your Merfolk get buffed. 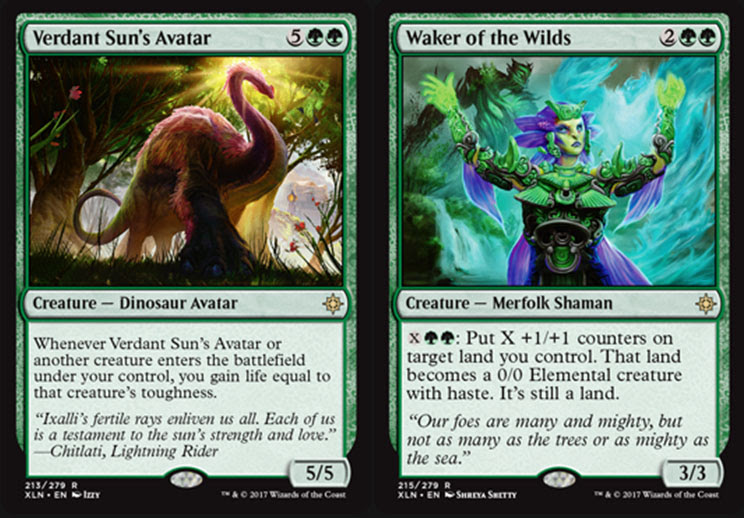 Verdant Sun's Avatar: I don't see the point of all the lifegain that could come out of this. Maybe there is an EDH deck that benefits from it.
Waker of the Wilds: It's a risky card with potentially high payoff. Once you have six or seven mana, you can be turning a land into a 4/4 or a 5/5, but if you lose it in battle, you are out of a land. 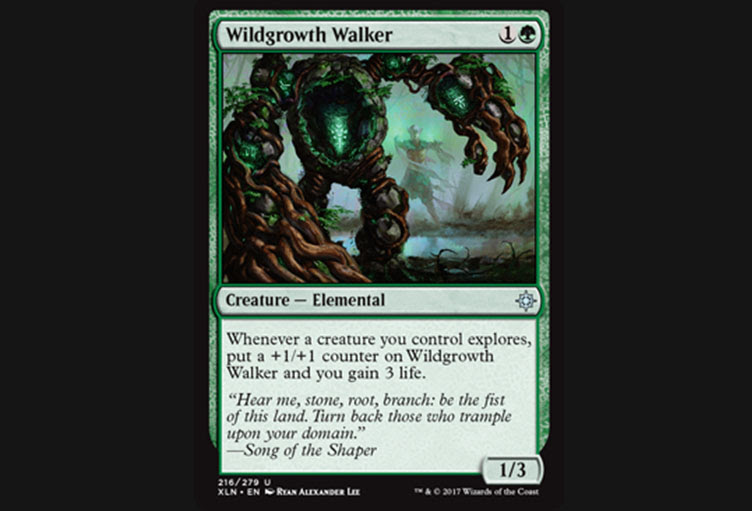 Wildgrowth Walker: I don't get where the life gain is going, but the counters, I get the counters. It comes in really early in the explore deck. I wonder how big it will get on average?
Posted by Rubiera