The concept of 'fun' is so important in games. Even though historically pirates were horrible people, and definitely the terrorists of their time, in our culture they have been recast as these fun-loving beings. Dinosaurs, of course, are a young boy's dream.

Wizards has topped that by reprinting Opt and Spell Pierce in the same set. That is amazing. This set had me at 'Hello.' There are still a few remnants of the battlecruiser power level in this set, and that's all right because we can chase them down with cards like Opt and Spell Pierce. 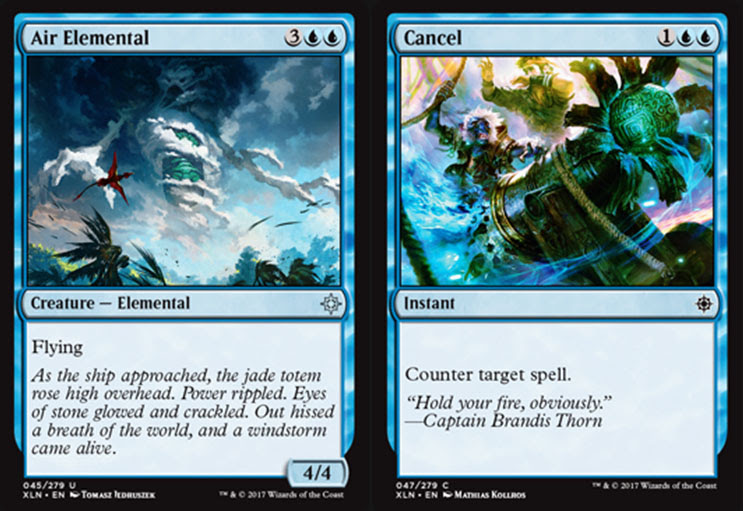 Air Elemental: All the way from Limited Edition Alpha. A great core set reprint.
Cancel: Another core set reprint, this time from Tenth Edition. Counterspell for the masses. 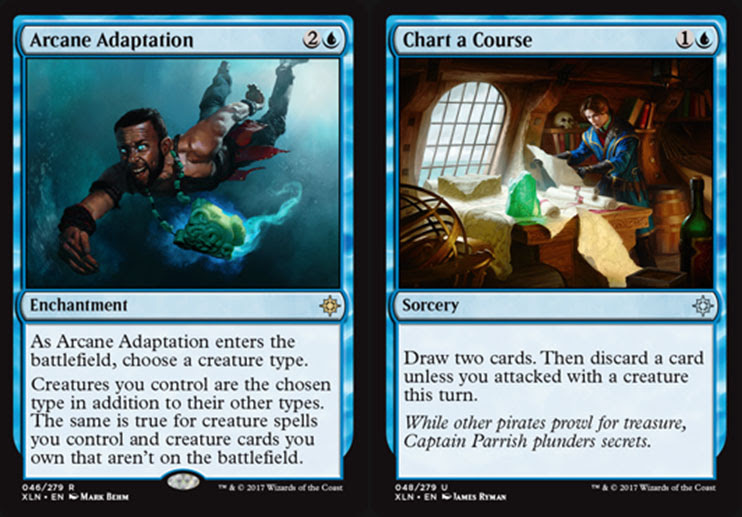 Arcane Adaptation: This is really good. It means you can use spells for a given tribe without packing these in your deck. For example, in Blue/Black, you can cast a spell for Zombies without having any Zombies in your deck since your creatures in your graveyard are now zombies. It's a risky card that can go sideways, yet, it will likely be just as popular and useful as Phantasmal Image was in Magic 2012 (1U You may have Phantasmal Image enter the battlefield as a copy of any creature on the battlefield, except it's an Illusion in addition to its other types and it gains "When this creature becomes the target of a spell or ability, sacrifice it.")
Chart a Course: Great uncommon. Would have been a common ten or fifteen years back, yet that does not make it suck. It's similarly costed as a Sorcery as See Beyond (1U Draw two cards, then shuffle a card from your hand into your library.) Most of the 'draw two cards' spells are Instants, or costed at three mana. This is really good. 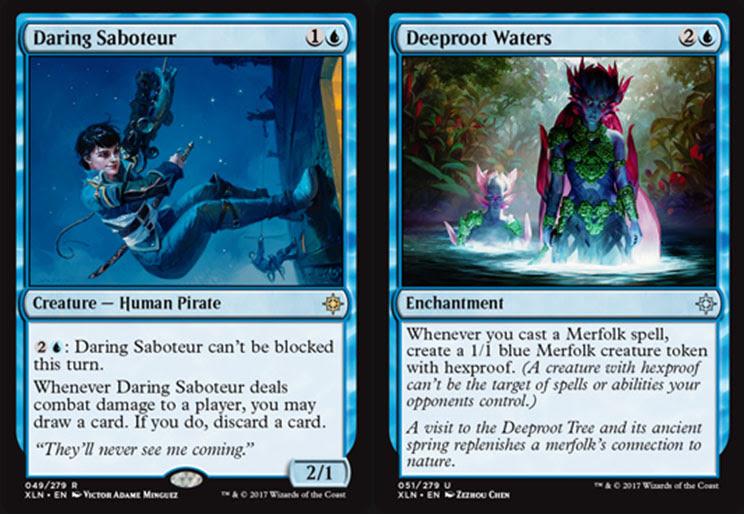 Daring Saboteur: A little constraining since you will have to discard a card no matter what. Still a solid card. The unblockable cost is low, and you can buff it with an enchantment.
Deeproot Waters: Another solid uncommon for Merfolk. I am not sure it will displace another card in that deck in Modern, for example, because the Merfolk Modern deck is packed with lords at three mana. It is still a solid card, definitely in Standard constructed. 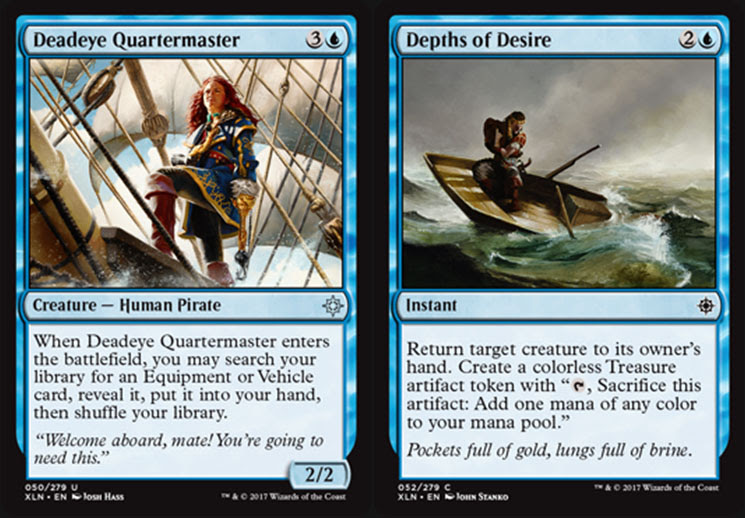 Deadeye Quartermaster: A tutor is always very useful, and it can be any Equipment or Vehicle. It comes in one mana too late for the other constructed formats, yet in Standard, it should have a home in several decks.
Depths of Desire: Meant for Limited. If I compare it to Unsummon (U), I am paying two mana for that Treasure token. The token will give me some mana versatility, and this is a tempo loss to my opponent. I will take it, but only after I have selected lots of removal and evasion, 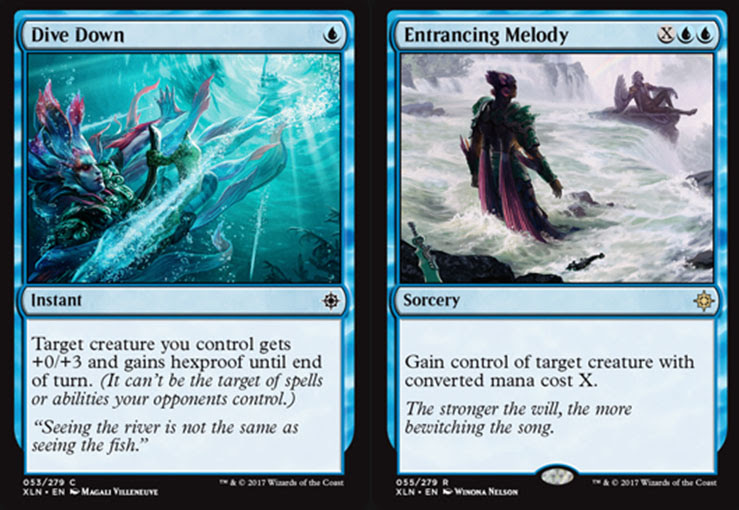 Dive Down: Meant for Limited. It's solid protection for something that's about to get removed.
Entrancing Melody: It can be more versatile than the five mana plus equivalents. It would be a great answer to a very aggressive strategy. It's only three mana against a pesky one drop. 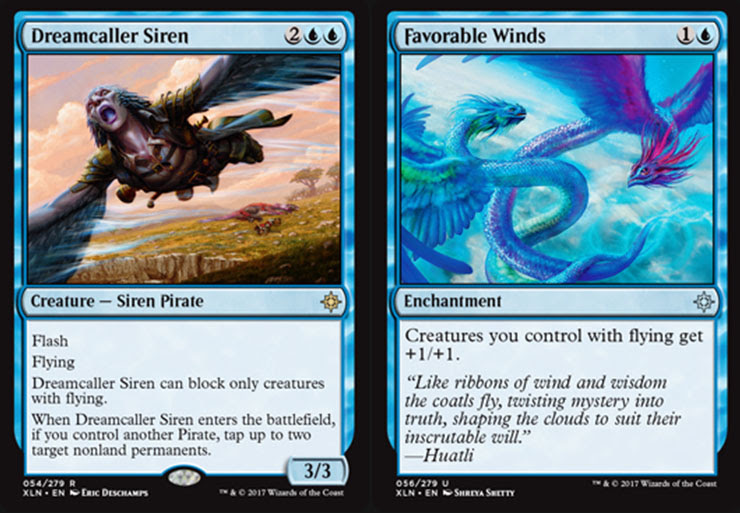 Dreamcaller Siren: Definitely a battlecruiser card. They have to have two non-lands worth tapping, and that usually means creatures, and it has a blocking downside.
Favorable Winds: From Avacyn Restored. It saw next to no play back then, even though it's a cool anthem and is aggressively costed. It forces you to only pack flyers. 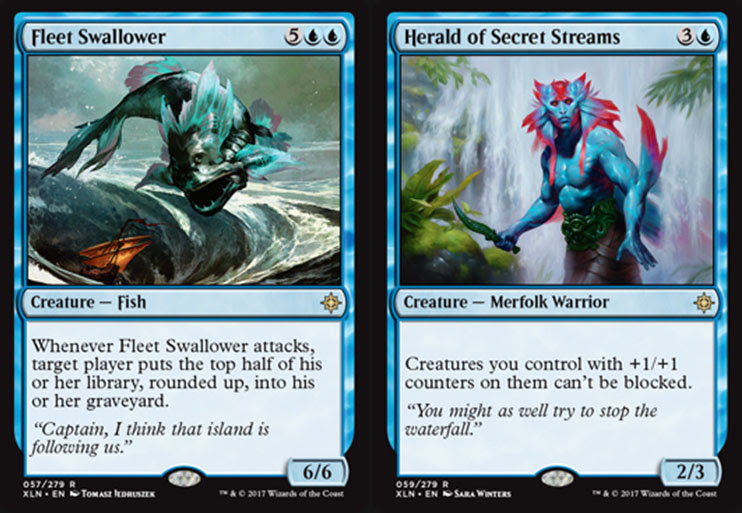 Fleet Swallower: Can only be useful in EDH. In any other format, you should have won by the time you have enough mana to cast this, even in mono blue.
Herald of Secret Streams: Comes in one more mana later than would make it amazing. I would still play it, but only in Standard. It will likely go in a deck with White, Green, or both. 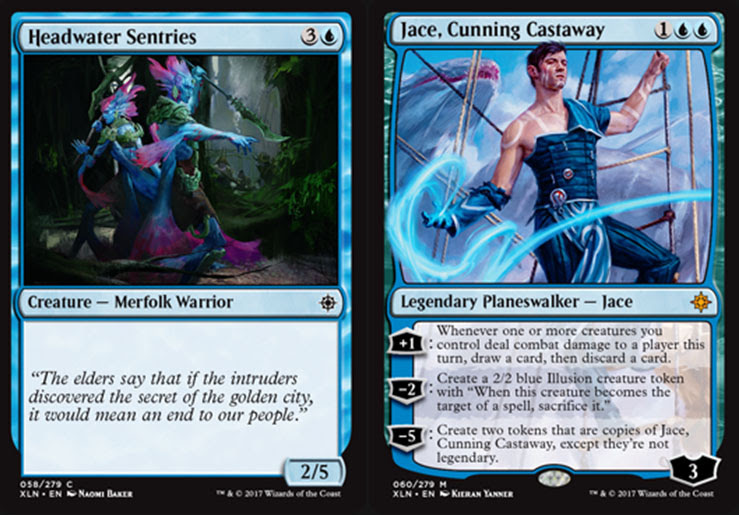 Headwater Sentries: I love vanillas. Meant for Limited.
Jace, Cunning Castaway: The artwork is a little on the off-Broadway side of things, maybe something you would find in Kitsch bric-a-brac. It does depict Wizards jumping the shark. Someone should have caught that and changed the artwork. It evokes Wizards finally running out of ideas, which is not what is happening in this set. The Don Draper haircut doesn't help.
The +1 has too many hoops. Being able to deal combat damage to a player is a lot harder than it seems. It might as well be costed at zero. It can only come in after you have set yourself up to always deal direct damage to your opponent with at least one creature. The -2 is good, but you need to have kicked in some +1s to safely use it. The ultimate is neat, but not earth-shattering. Those tokens still have three loyalty starting off. This planeswalker lives or dies with your ability to deal direct combat damage to your opponent. If you can do that, this is a must-have. If you can't, you are delaying how long it will take you to lose. 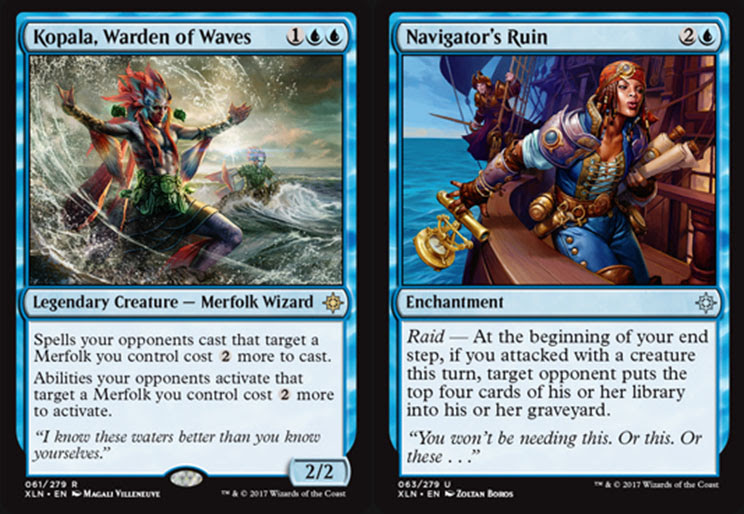 Kopala, Warden of Waves: A great way to protect your Merfolk. A much stronger version would have given your Merfolk some sort of a boost. Costed where all the Modern Merfolks lords are.
Navigator's Ruin: By itself, it needs to trigger 15 times to deck your opponent. It's a solid addition to a milling deck, but not the key card for the deck. I would make sure I have as many of these on the board as possible. If it milled five, it would be the build around card in a milling deck, since with two of them on the board, your opponent is on a six turn clock. With two of these on the board, your opponent is on an 8 turn clock. 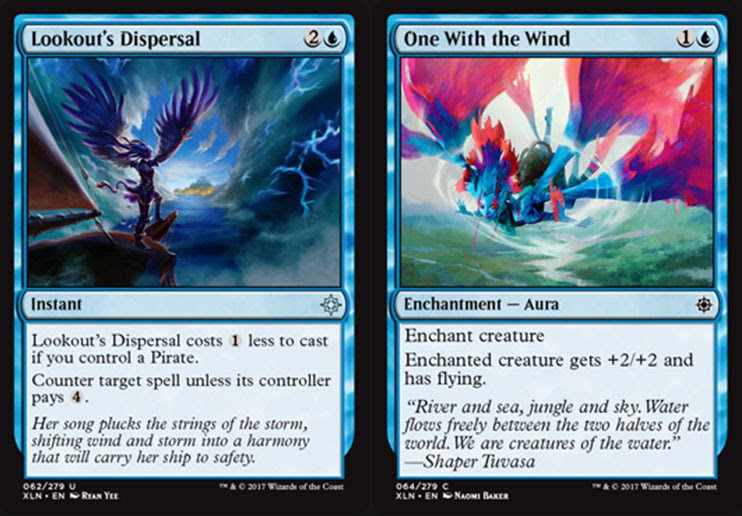 Lookout's Dispersal: A Mana Leak for Pirates? Sold! This is amazing. It is stronger than Mana Leak (1U Counter target spell unless its controller pays 3.) as long as you control a Pirate. Nice!
One With the Wind: Solid for an unblockable creature, actually for any creature. 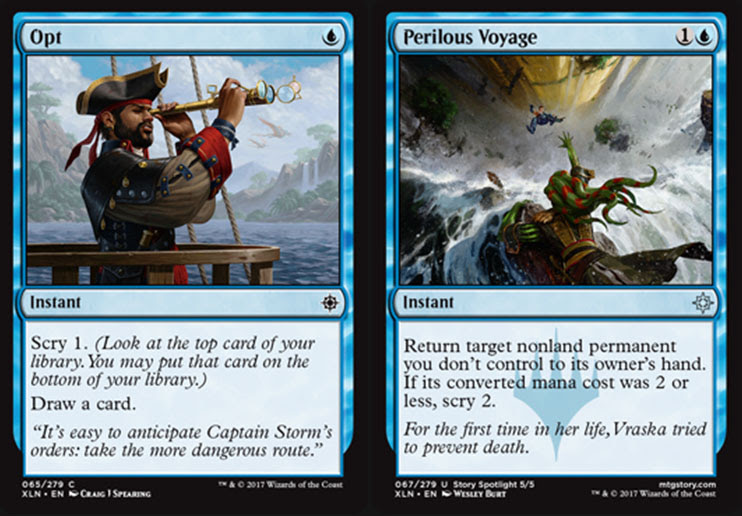 Opt: One wonderful way to sell packs is to have at least one Blue common card that is really good. Think Ponder for Magic 2012, Delver of Secrets for Innistrad, and Treasure Cruise for Khan of Tarkir. We have not had one since Khans of Tarkir. That was a really long time ago.
Perilous Voyage: Solid in the early game. It will be easy to find targets to get Scry 2 out of it against many decks in Standard. 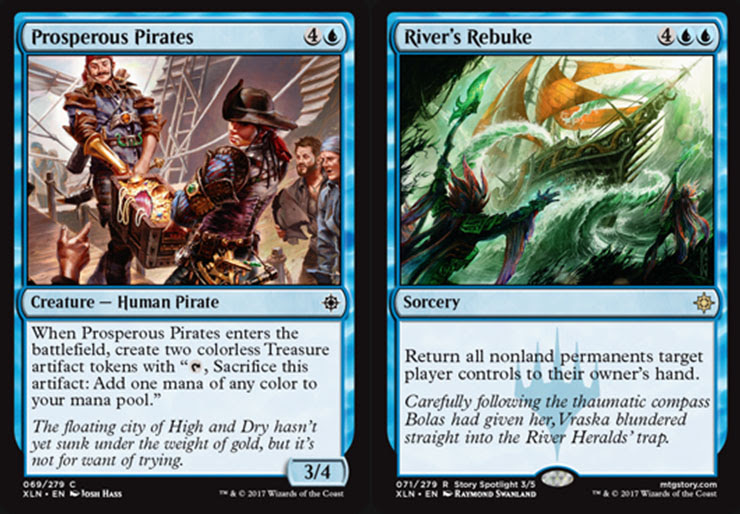 Prosperous Pirates: Meant for Limited.
River's Rebuke: Solid. It takes a lot of mana to pull this off, yet it can turn a game around. It's one mana less than Cyclonic Rift with Overload (1U Return target nonland permanent you don't control to its owner's hand. Overload 6U (You may cast this spell for its overload cost. If you do, change its text by replacing all instances of "target" with "each.")). 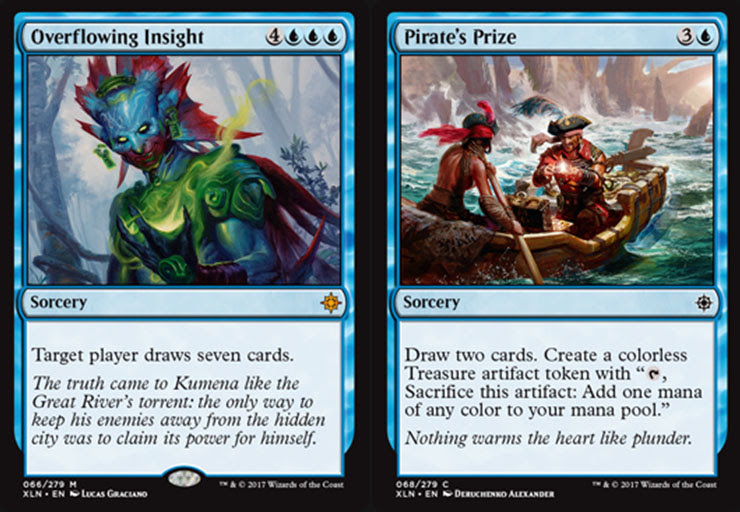 Overflowing Insight: A simpler Sphinx's Revelation (XWUU Instant You gain X life and draw X cards.) With X=7, you would have needed 10 mana and here you only pay 7 minus the life gain. It's hard to tell before we see it in play, but it reads like it could be a cornerstone card for Standard control.
Pirate's Prize: Solid in Limited. I could even see myself using it in Constructed. 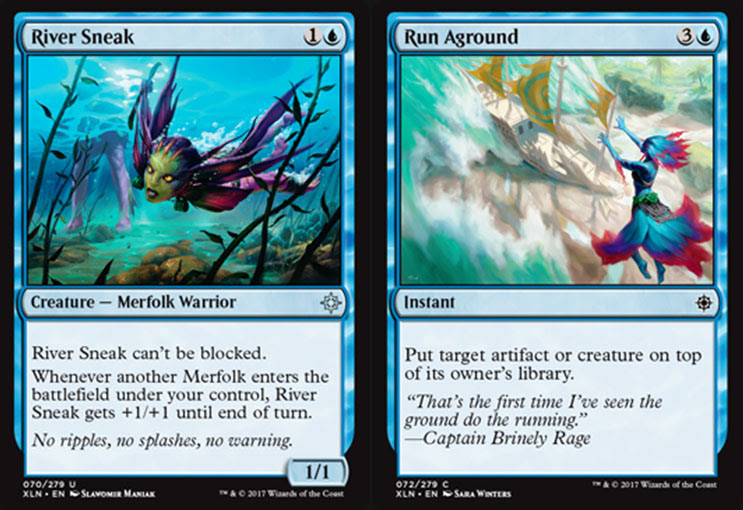 River Sneak: Solid trigger to play Jace in a Merfolk deck.
Run Aground: Sweet! A strictly better Griptide (3U Instant Put target creature on top of its owner's library.). 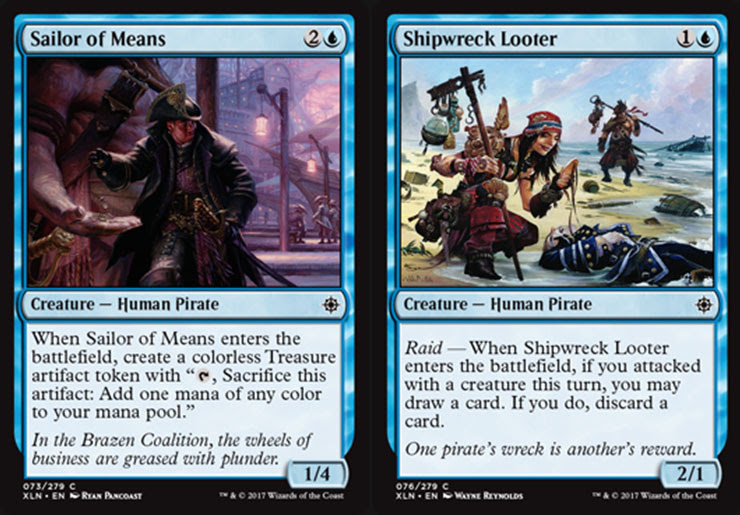 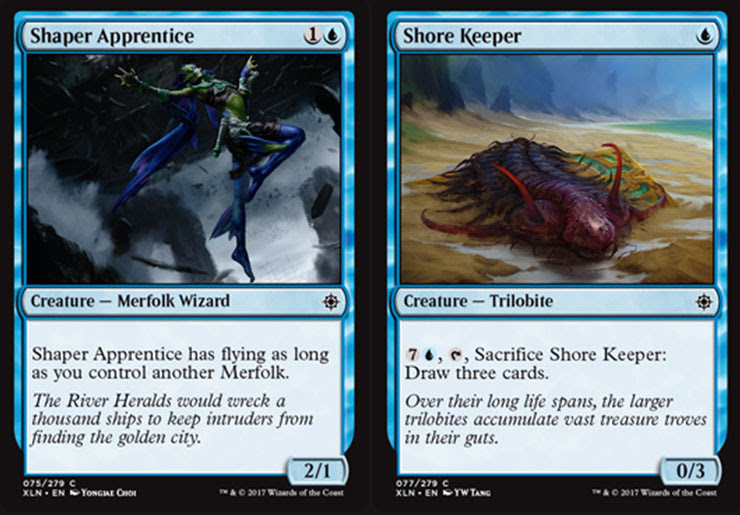 Shaper Apprentice: Meant for Limited.
Shore Keeper: I am not a fan of these low drops with some gigantic mana ability. I only see them being good in Limited. 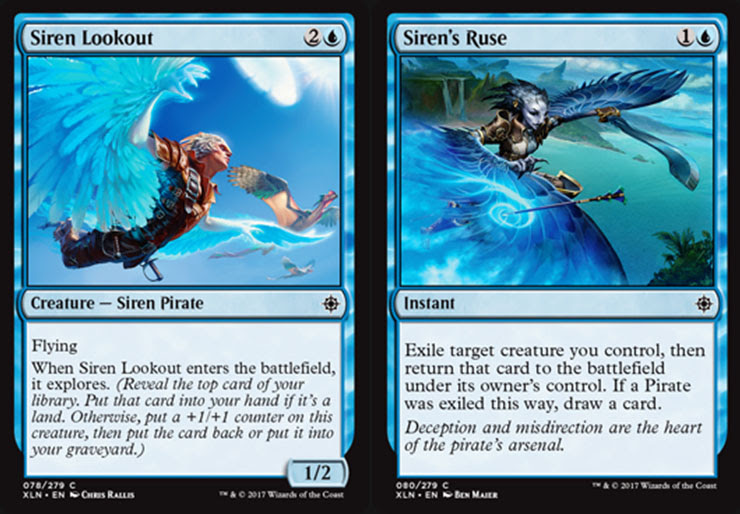 Siren Lookout: I hope exploring is as good as I am reading it. I really like this ability.
Siren's Ruse: Simply fantastic. The Pirate clause keeps it from being added to many other decks. Still, this one card makes me want to build a Pirate deck. 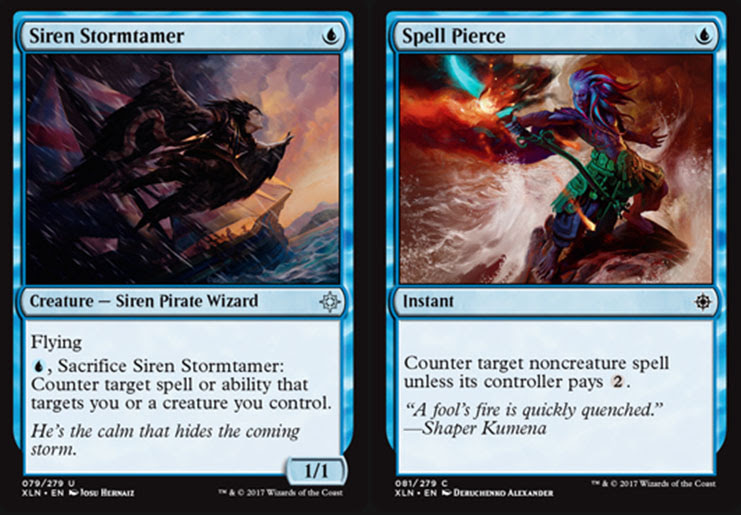 Siren's Stormtamer: That reads super strong. Against Red and Black, this is a great card to have on the field.
Spell Pierce: What can I say? I still can't believe such a strong card is in a battlecruiser era set, and I hope that means the battlecruiser era is over. 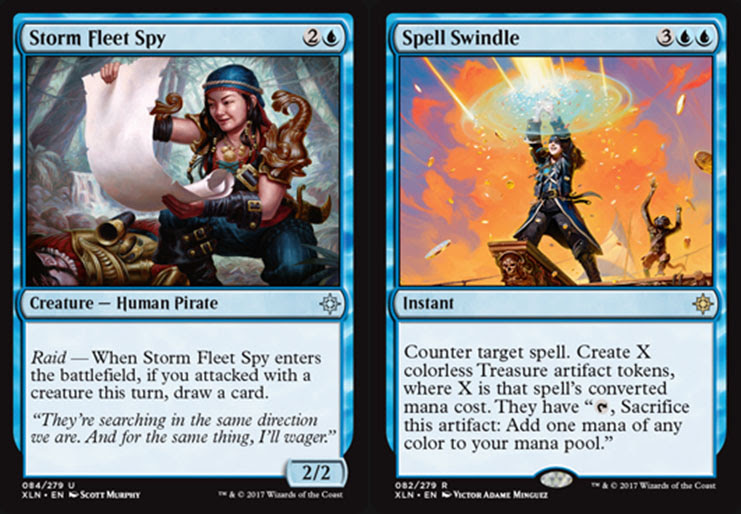 Storm Fleet Spy: Solid. It's going in the Pirate deck for sure.
Spell Swindle: A Mana Drain for the masses (UU Counter target spell. At the beginning of your next main phase, add an amount of Colorless to your mana pool equal to that spell's converted mana cost.) That's awesome. 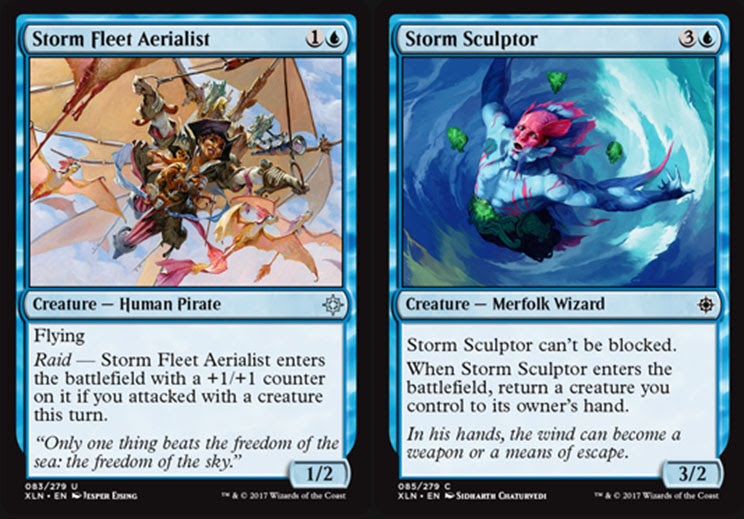 Storm Fleet Aerialist: Another solid Pirate for Constructed.
Storm Sculptor: Solid in Limited. It can trigger an ETB for another card for a second time and you can enchant it and deal combat damage reliably. 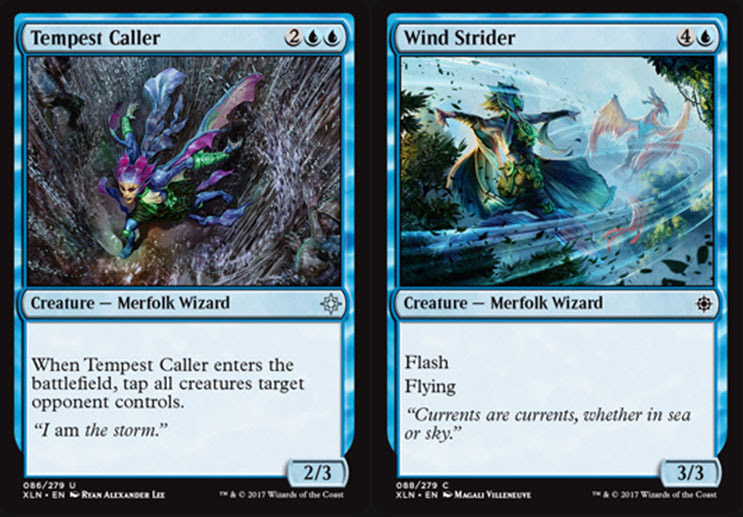 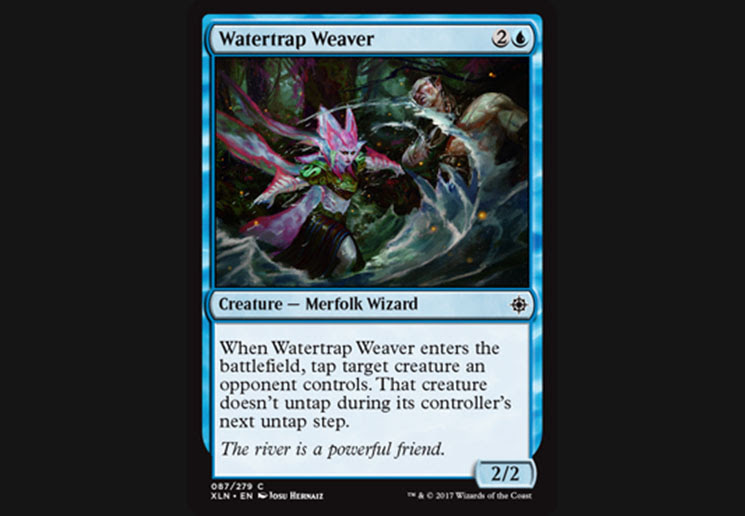 Watertrap Weaver: Another solid common in Limited. I can even see it get play in Constructed.
Posted by Rubiera