I am already psyched about this set, and I haven't even gotten to my favorite color. That has not happened since I forget when... definitely before Theros. 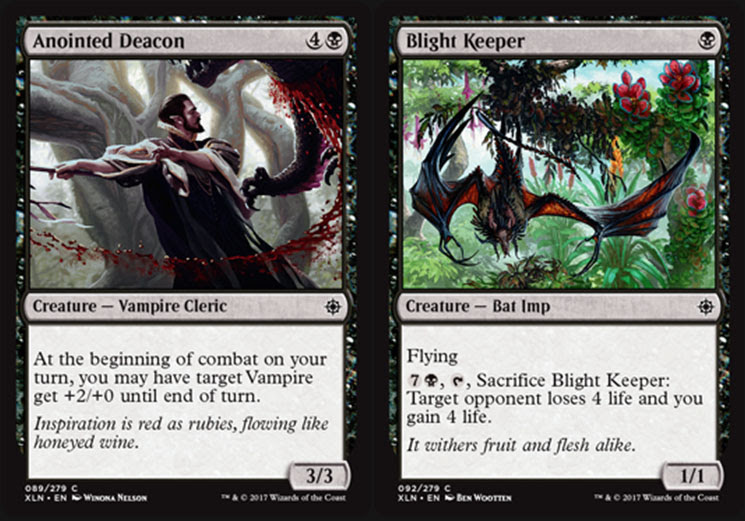 Anointed Deacon: Meant for Limited.
Blight Keeper: Once again, I am not a fan of these huge mana cost abilities staples to a Limited card... there has to be a one in a million chance you will ever get to trigger it unless you draw it at the end of the game. It's a Johnny win that happens once in a lifetime. 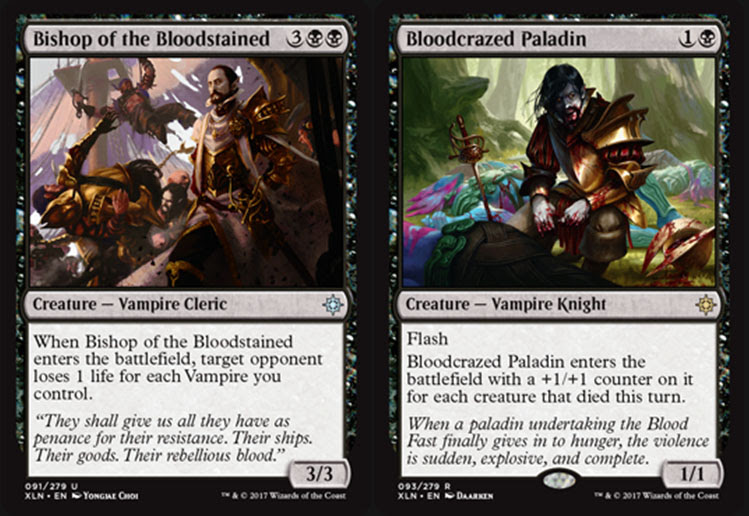 Bishop of the Bloodstained: Love the Velazquez-like art. It can be as good as Gray Merchant of Asphodel (3BB When Gray Merchant of Asphodel enters the battlefield, each opponent loses X life, where X is your devotion to black. You gain life equal to the life lost this way. (Each Black in the mana costs of permanents you control counts toward your devotion to black.)) I like it a lot. It will take more setting up than the merchant, yet that's OK.
Bloodcrazed Paladin: Great to drop after a board wipe. 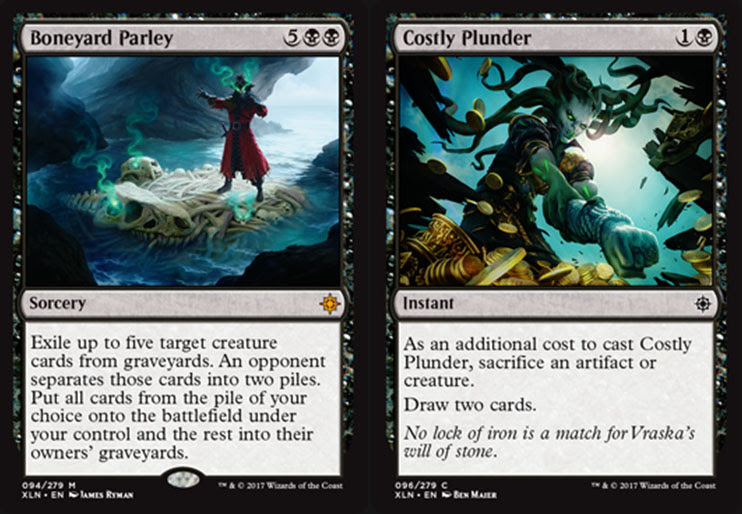 Boneyard Parley: Costly Parley sounds like a better name. Your usual EDH mega effect: pay 7 mana, do something ridiculous that involves multiple players.
Costly Plunder: Two mana for two cards and you can even gain something from dropping a creature in your graveyard or have an artifact you don't need as much. 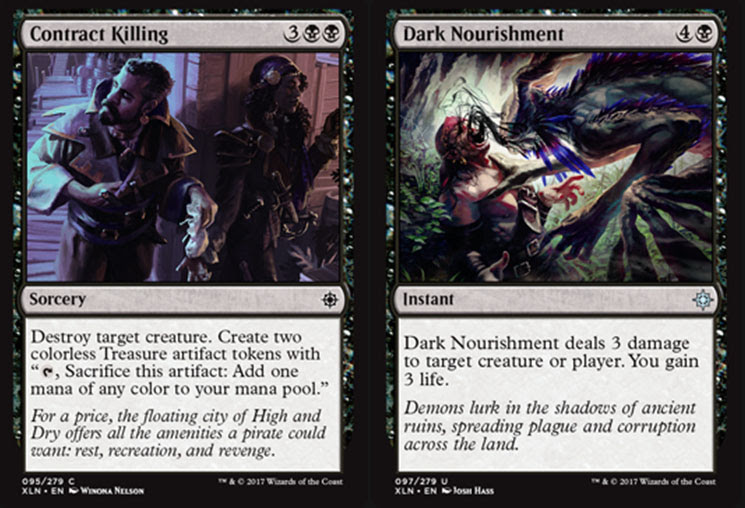 Contract Killing: Meant for Limited.
Dark Nourishment: "or player" is the best part. It's solid, since you will be 6 life away from your opponent if you hit to face. 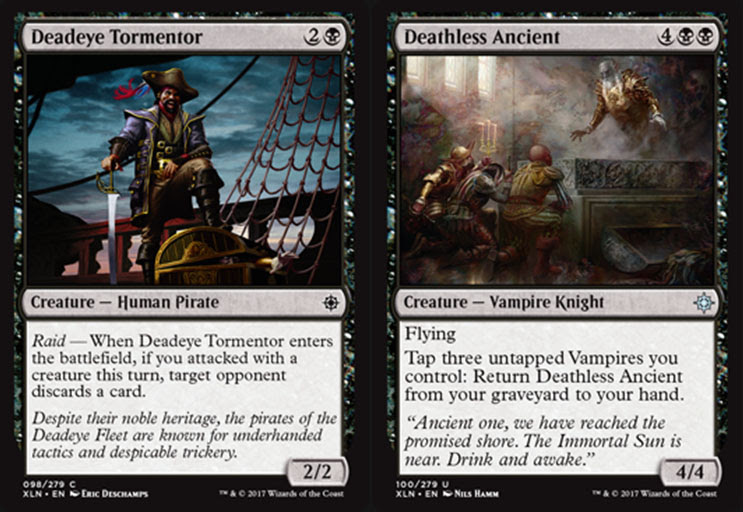 Deadeye Tormentor: Not bad, and maybe not just a Limited card. Forcing your opponent to discard is often very good.
Deathless Ancient: You still have to pay the six mana to cast it after all that effort. I would use it in Limited since it flies. 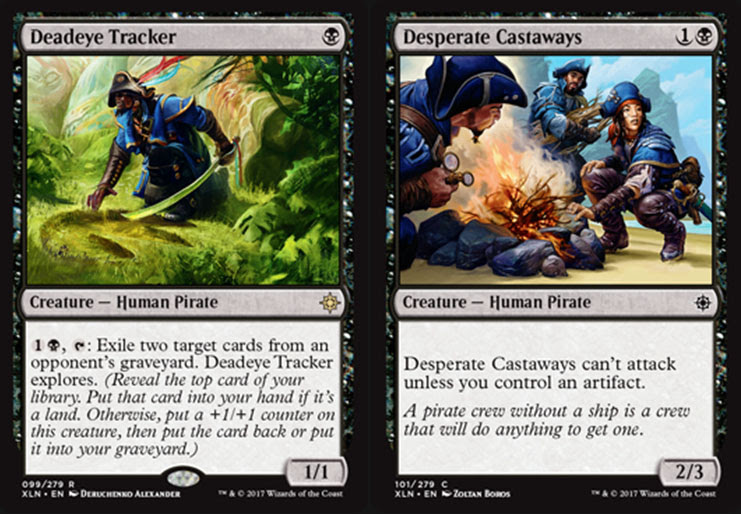 Deadeye Tracker: I would want to cause some discard first, but yeah, that's a cool effect. Exploring just reeks versatility.
Desperate Castaways: Meant for Limited. 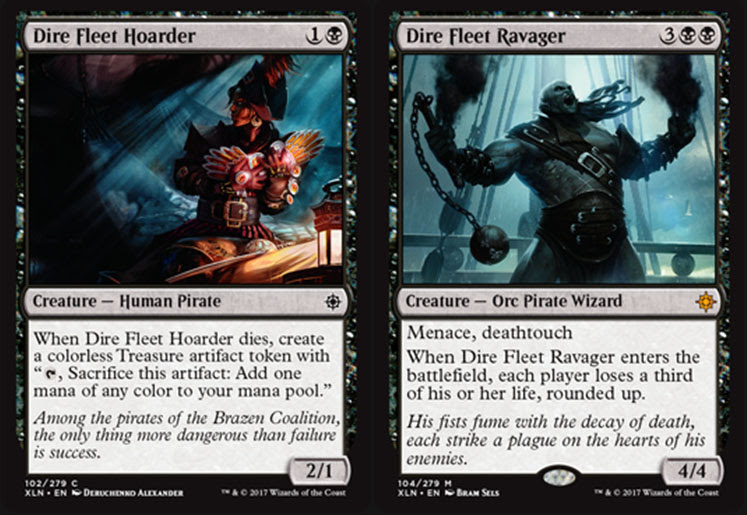 Dire Fleet Hoarder: Meant for Limited.
Dire Fleet Ravager: "each player" means you too lose life... not so good. I like the cost, and I love Menace and Deathtouch, but it hits you for a lot of life. I would only play it if I had a big advantage over my opponents, in which case I would play something else. If it had Flying and was a 6/6, that would be another story. 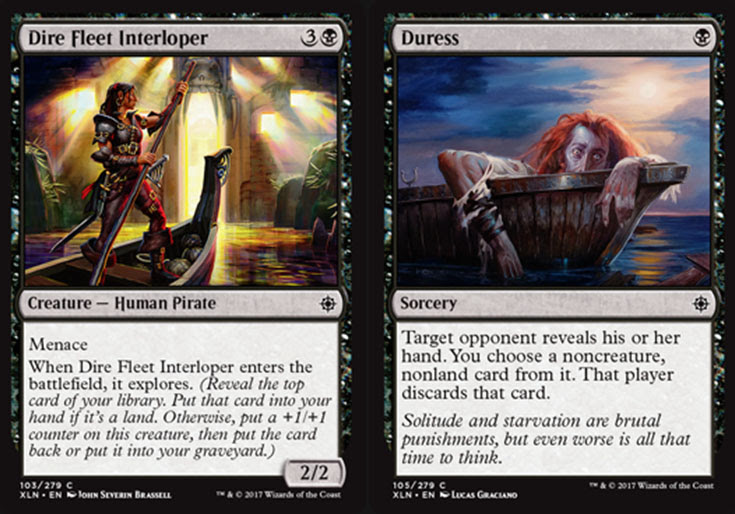 Dire Fleet Interloper: Solid in Limited, I may even try it in Constructed just because I am very curious about how good exploring can be.
Duress: Welcome back! 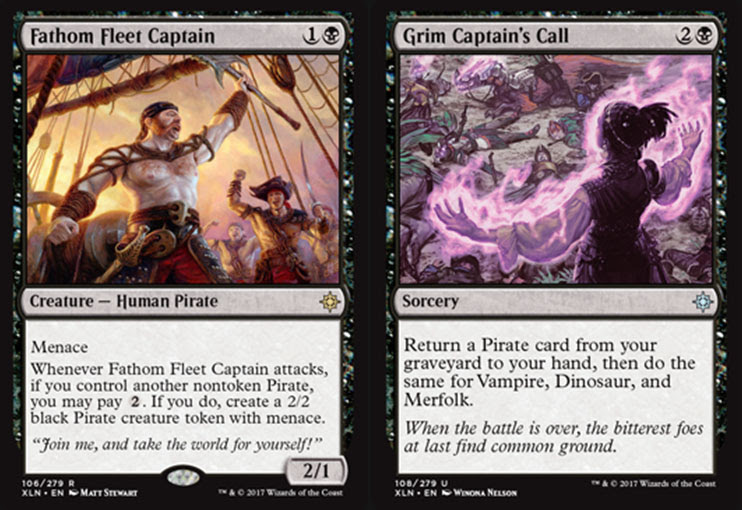 Fathom Fleet Captain: A lot of setting up to get the token, yet you can may be able to do it consistently if you buff it or make sure your opponent has no more than one creature on the battlefield.
Grim Captain's Call: Love the artwork. It should be really good in Limited, where you may need to play all four tribes in the same deck. 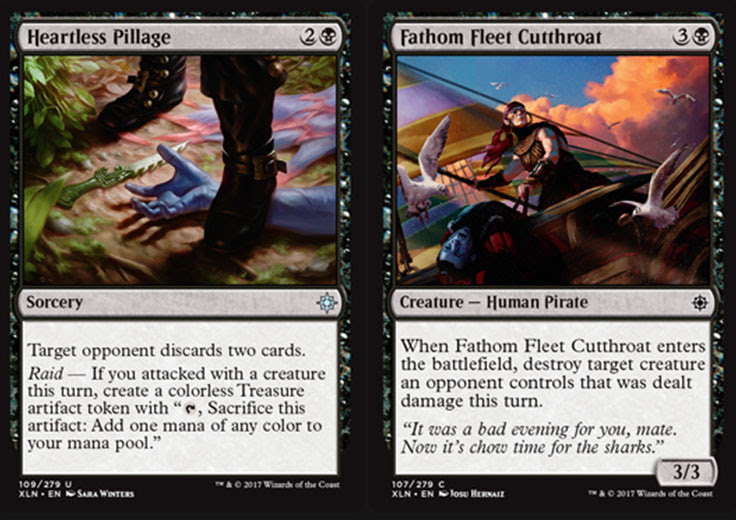 Heartless Pillage: Should be really good. Three mana for two discarded cards is great. You will have to play it after combat to get the token, and that will be fine if you build your deck with this in mind.
Fathom Fleet Cutthroat: Solid in Limited, and I may even want to try it in Constructed. 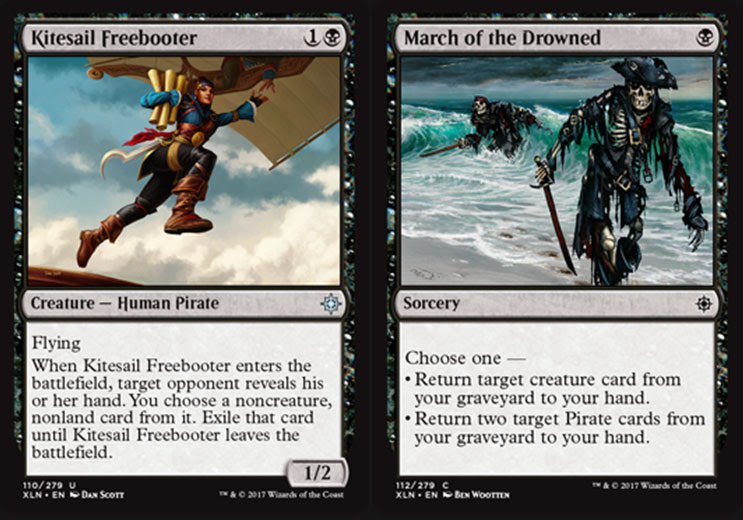 Kitesail Freebooter: Love it. It could temporarily remove a threat and it is aggressively costed. In some of the weaker recent sets this would have been a rare.
March of the Drowned: That Pirate deck is going to be a lot of fun. It has support that would be OK for any creature and is excellent for Pirates. 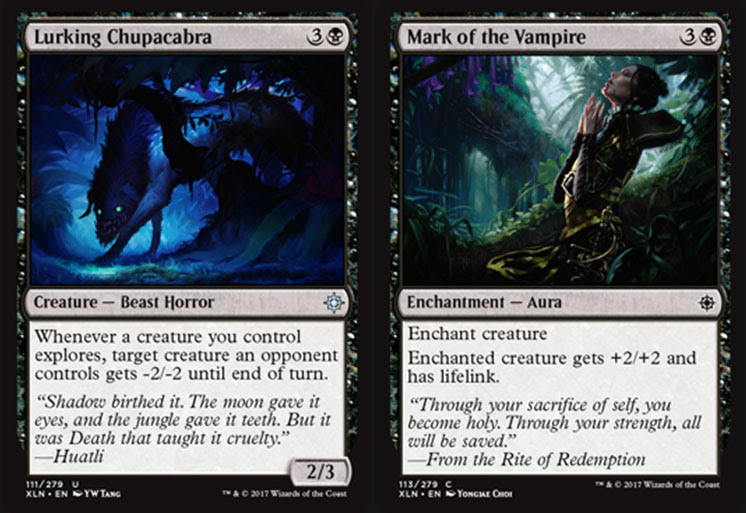 Lurking Chupacabra: Great title! If only I could pull enough explore creatures in Limited... I definitely want to put the explore cards in a deck and see how they play.
Mark of the Vampire: Meant for Limited. 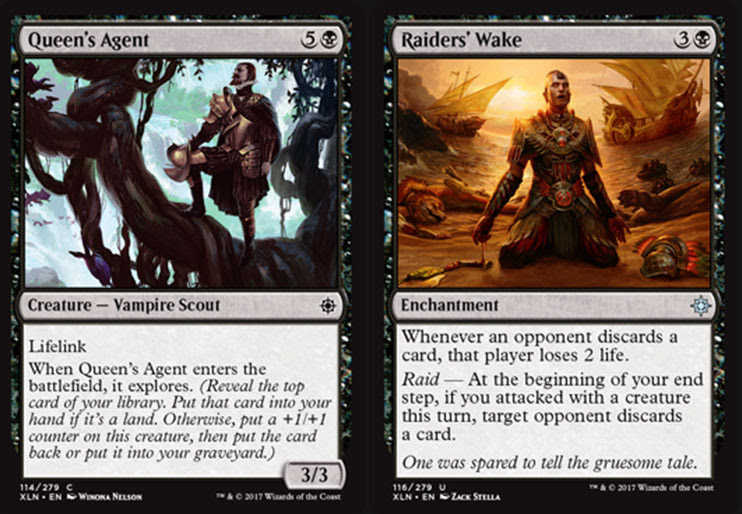 Queen's Agent: Meant for Limited.
Raider's Wake: Oh, I really want to build a casual Standard deck around this card. If it was a two drop, I would be trying it out in all formats. As a four drop, it enters too late to be a force to be reckoned with. 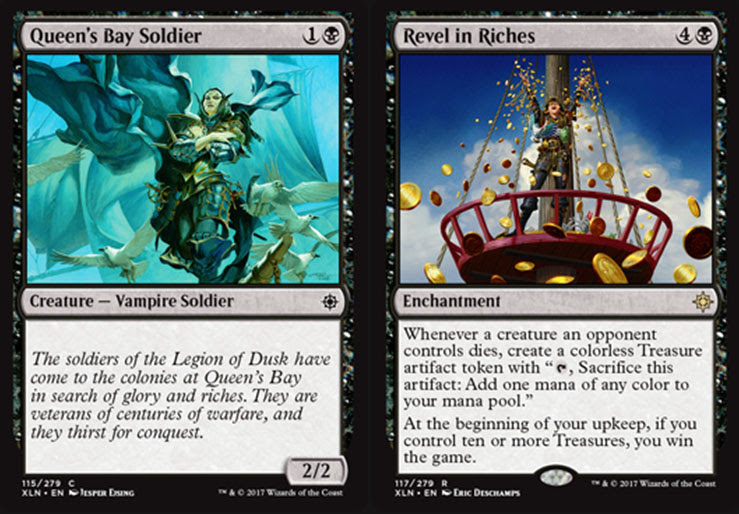 Queen's Bay Soldier: Black bear.
Revel in Riches: Because EDH. It's a great alternate condition win, except you need opponents with lots of creatures. It's nearly impossible to pull off in the non-rotating formats, where low or no creature decks are common. I would love to try in Standard 'just because.' 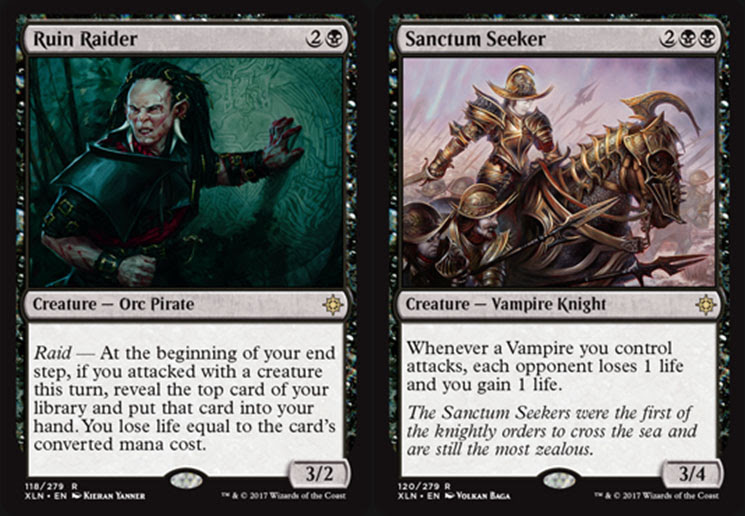 Rain Raider: Dark Confidant at one more mana and requiring setup. It should be really strong in Standard. It won't be able to kill you as fast as Dark Confidant can kill you, there is Scry in Standard, and maybe I would pack some lifegain, yet it should be a fun trip.
Sanctum Seeker: I have not forgotten that Blood Artist is a Vampire, and I am always looking for ways to build yet another deck with it (1B Whenever Blood Artist or another creature dies, target player loses 1 life and you gain 1 life.). I am not sure this goes with it, I am only reminded of Blood Artist when I look at this card. 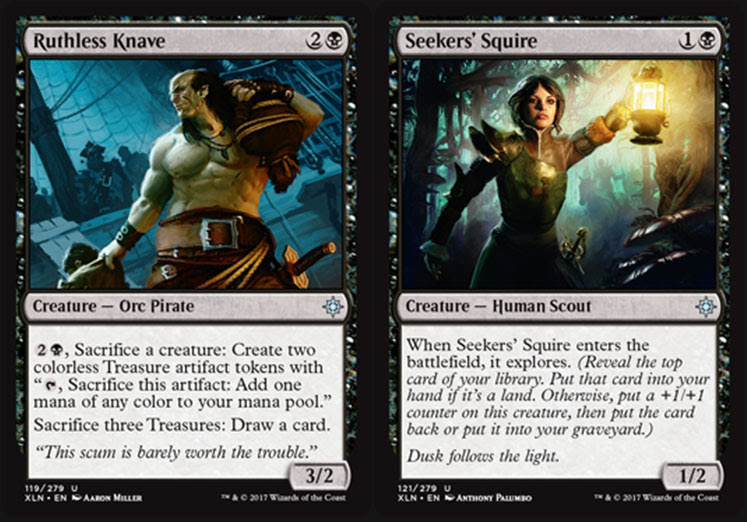 Ruthless Knave: Really good if not really strong. It will generate tokens very quickly in a deck full of sacrifice targets. It wouldn't be a Pirate deck, though. I am thinking of Gravecrawler (B Gravecrawler can't block. You may cast Gravecrawler from your graveyard as long as you control a Zombie.)
Seekers' Squire: I am loving these explore cards for a fun casual build. 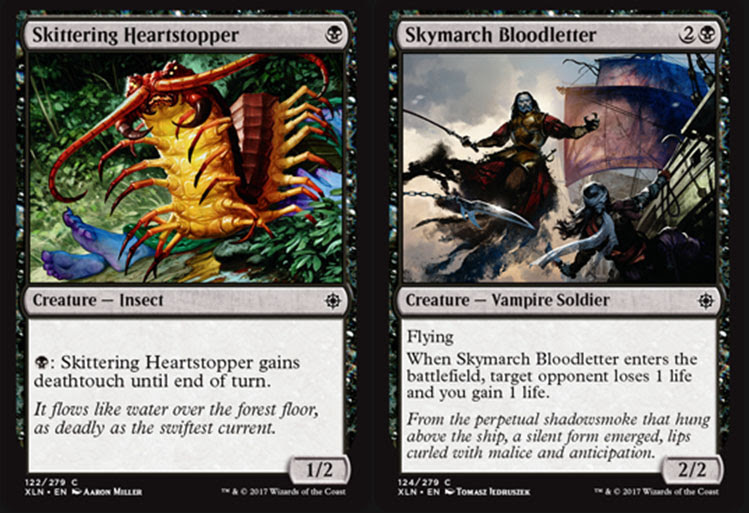 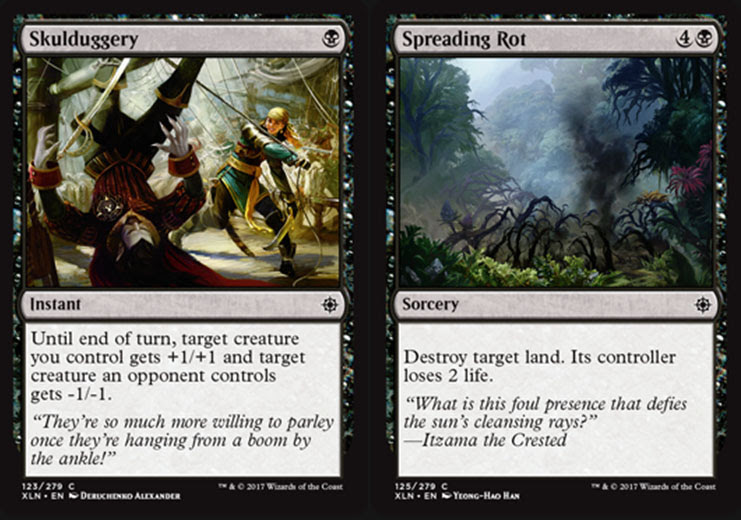 Skulduggery: Sweet battle trick. I would put it in so many decks!
Spreading Rot: A new land destruction card similar to Destroy the Evidence (4B Destroy target land. Its controller reveals cards from the top of his or her library until he or she reveals a land card, then puts those cards into his or her graveyard.) Destroy the Evidence definitely destroyed it's own evidence of being playable, and believe me, I tried! 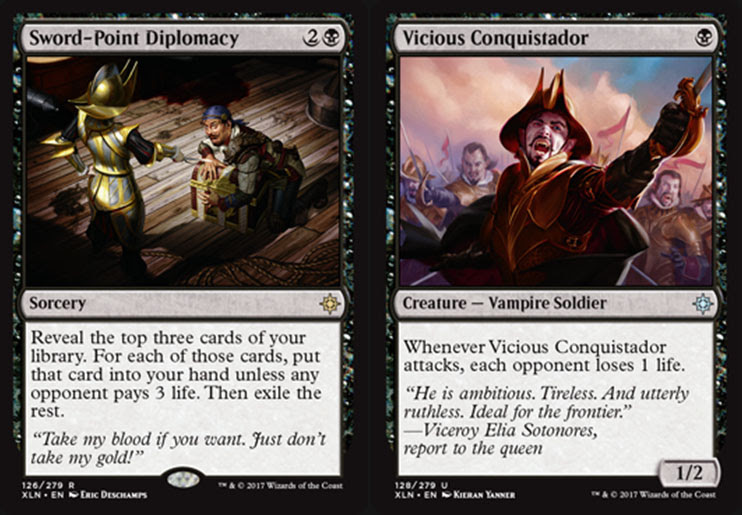 Sword-Point Diplomacy: Tricky yet powerful. It can go sideways on you, though. Your opponent lost nine life, but you exiled three cards without seeing them first. It's a thinking card, for sure. Without some Scry, I would not be too hot about playing it.
Vicious Conquistador: "Each opponent" makes it really good in EDH. I would have to buff it to get the pinging for life benefit mid to late game. 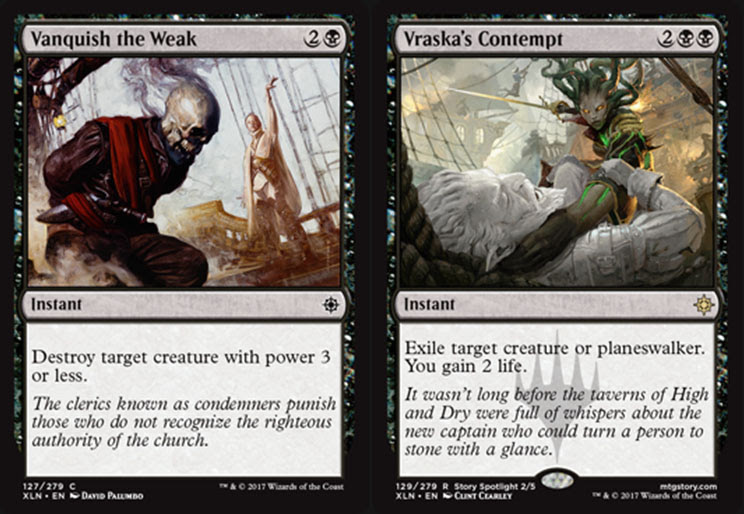 Vanish the Weak: I guess we still have some battlecruiser cards. Same cost as Murder, but limits you to low power creatures.
Vraska's Contempt: The lifegain is insignificant compared to the exile effect, which is well-costed, Also, instant speed is awesome. 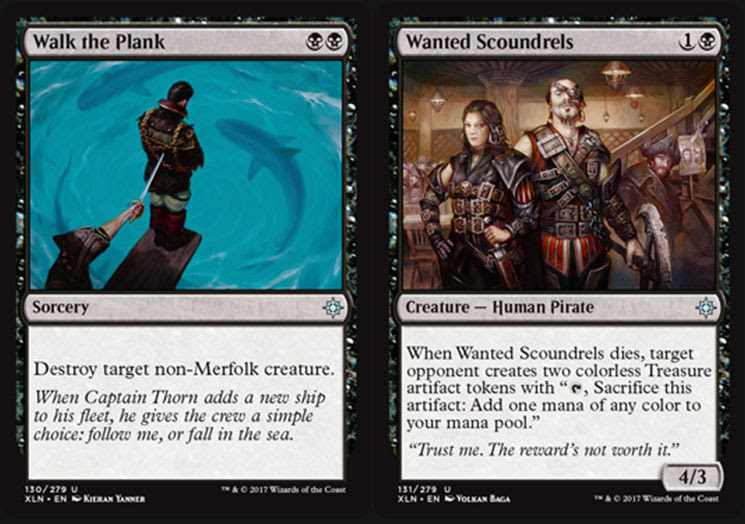 Walk the Plank: Equivalent to (and I would say better than) Victim of Night (BB Instant Destroy target non-Vampire, non-Werewolf, non-Zombie creature.) except it is a Sorcery.
Wanted Scoundrels: Another great addition to the Pirate deck. One card I would enchant to make Indestructible, or with Hexproof, or with Shroud.
Posted by Rubiera