This is the bonus round in such a strong set. 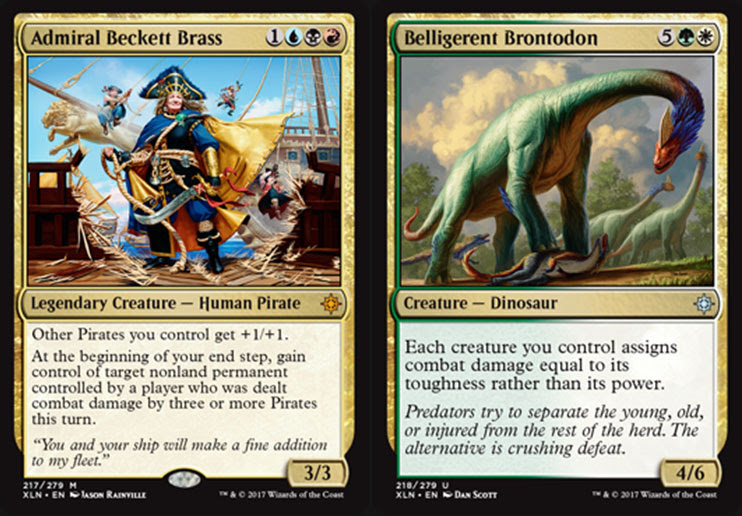 Admiral Beckett Brass: That is one difficult clause to jump through, but if you do, especially in EDH, you could be taking over some really powerful nonland permanents one a turn. The lord part is good too, but a triple mana constraint really sucks in Standard. It forces you into an expensive and high maintenance manabase.
Belligerent Brontodon: That's a really cool casual card that will likely go nowhere. It is too costly for Standard and too weak for EDH. It needed to have a really strong effect for EDH. Still, there are plenty of fat butt critters out there for a casual EDH deck with this in it. 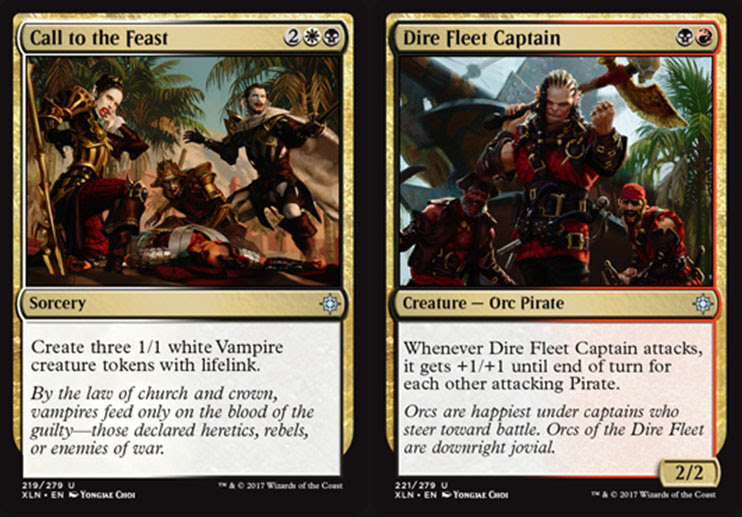 Call to the Feast: Nice token maker.
Dire Fleet Captain: I wish there was a Pirate token maker. This could get big. "each other" can be a lot more than "each." 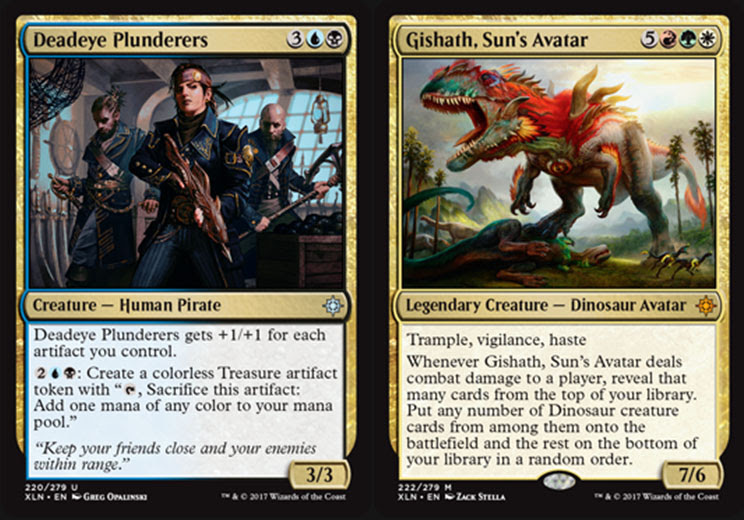 Deadeye Plunderers: Wow, that's a surprisingly strong clause (for each artifact). The token-making is way over-costed.
Gishath, Sun's Avatar: Wow, that is so strong! I know EDH is it's home, but I would love to cast this in Standard. Hit for six, dig six cards for Dinosaurs... wow! 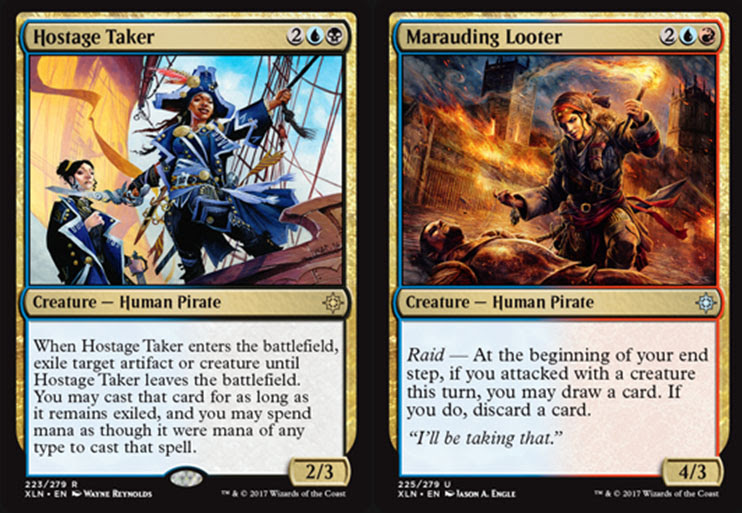 Hostage Taker: That seems like a lot of fun. It will anger opponents to no end, though. It's a simple and effective card. It's not even that expensive in Standard.
Marauding Looter: 'Draw a card, discard a card' effect usually found on Blue/Red cards. This card would be a lot more fun with Flashback cards. The Aftermath cards are a reasonable substitute. 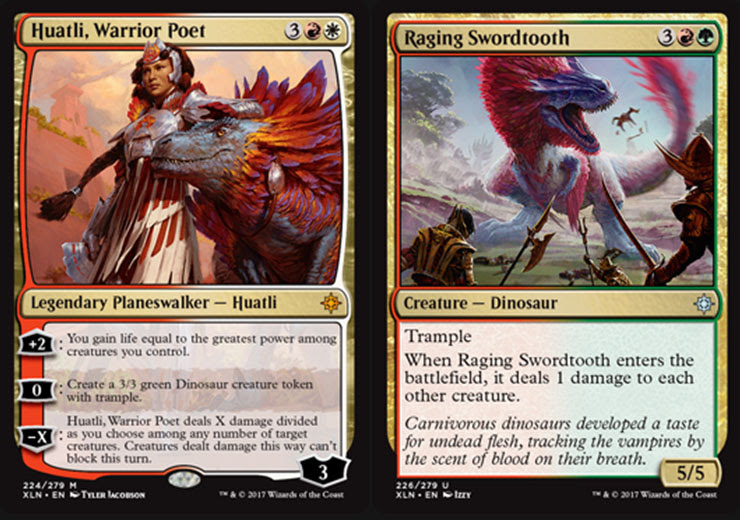 Huatli, Warrior Poet: Awesome artwork, exceptional! Does not read like a really strong planeswalker, which is great, because then it will be affordable for us casuals. The +2 is not that great since life gain usually delays the inevitable defeat unless there are strong triggers for the life gain, yet a +2 is way, way better than a +1. I like the 0 ability a lot. A 3/3 token maker is awesome. The -X ability is good to clear the board but is considerably weaker than an ultimate should be.
Raging Swordtooth: That is one awesome Enrage trigger. This is the centerpiece of the casual Dinosaur deck. A ping for 1 is exactly what Enrage needs. Wizards decided to staple the effect on a creature instead of doing it the Hearthstone way having a spell that reads "Deal 1 damage to each creature." Regisaur Alpha: That's pretty good. You will need to have other Dinosaurs to benefit from the Haste bonus. It's not a game-winning spell, but it's good.
Sky Terror: I would auto-include it in a Dinosaur deck, and it would be a needed flyer in Limited. Shapers of Nature: Versatile. The 3G counter is a little on the expensive side, but the card draw is just right. I want to play it in Casual Modern, where there are many cards that put counters on creatures, and then use those counters as card draw. Compare with Dimir Guildmage ( [U/B U/B] 3U: Target player draws a card. Activate this ability only any time you could cast a sorcery. 3B: Target player discards a card. Activate this ability only any time you could cast a sorcery.)
Tishana, Voice of Thunder: Although I really don't like the cards in hand part... actually, it has to be one of the lamest clauses on a card and reminds me mostly of Saviors of Kamigawa, which to date is in contention for one of the worst sets ever, this card is really strong if you set it up right. When it comes in it can draw you a ton, and you can keep all those cards until next turn. In Modern, I would put it in a token deck not necessarily a Merfolk deck. It's the top end of your mana curve in the Standard Merfolk deck. If you don't win the game when this lands in the Standard Merfolk deck, you need to play more Magic. You are in Blue/Green. You should be able to pack your deck with card draw and token makers. Yeah, and it should be a solid Merfolk commander. It's too heavy to impact the early game in commander, yet it lets you keep all the cards you draw. That should be a lot of fun. 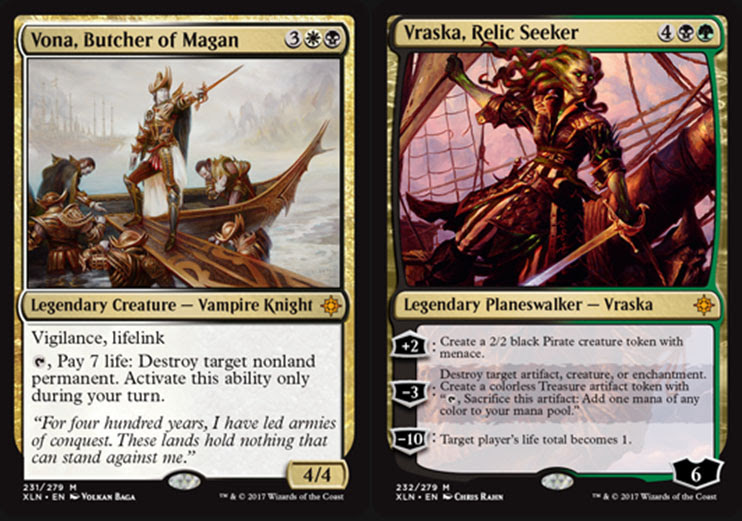 Vona, Butcher of Magan: There are many ways to get a ton of life, and it even uses some of the not-so-expensive cards in Magic. I would gain a ton of life, and untap it more, using cards like Djeru's Resolve W Untap target creature. Prevent all damage that would be dealt to it this turn. Cycling 2 (2, Discard this card: Draw a card.) In Legacy, you can do it multiple times and with one card using Jandor's Saddlebags (2 Artifact 3, Tap: Untap target creature.) In Modern, you can use Magewright's Stone (2 Artifact 1, Tap: Untap target creature that has an activated ability with Tap in its cost.)
Vraska, Relic Seeker: High cost planeswalkers (actually, most planeswalkers) don't make it in Modern. Let's assume this one is aimed at Standard only. In Standard, it should be awesome. It has a +2 ability, and that means it gets closer to its ultimate twice as fast when compared to having a +1 ability. And the +2 creatures a token, what's not to like about that? The -3 destroys something, and that's great. It's not as good as the original Vraska's -3, which destroyed a nonland permanent-especailly one of your opponent's planeswalkers, but it's good enough. The ultimate wins the game under most circumstances, and that is what an ultimate should do. 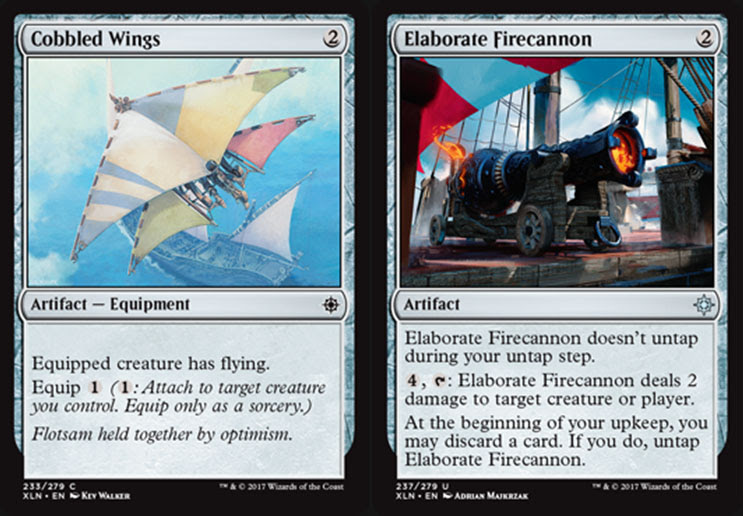 Cobbled Wings: Go-to make-a-flyer, mostly in Limited, but maybe I want to get those Dinosaurs flying.
Elaborate Firecannon: It looks like as long as you have cards you can discard and four mana a pop, you can do this multiple times during your upkeep. My deck will need to have some graveyard matters cards and lots of card draw. That places me in Blue/Black. It untaps itself. That's huge. 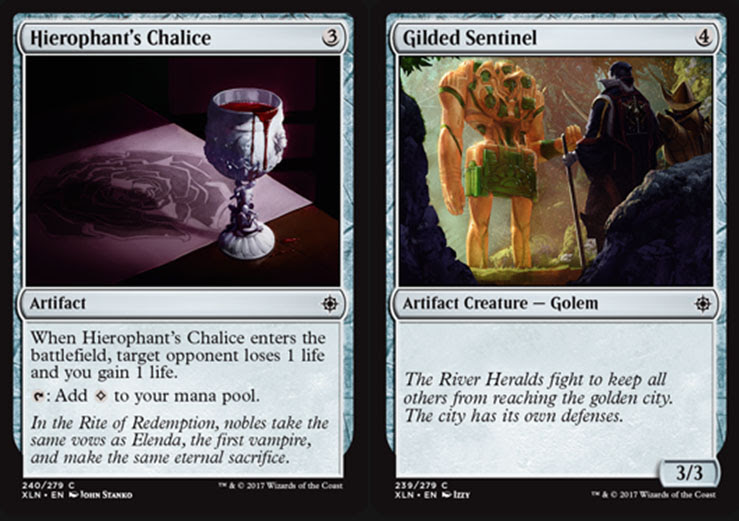 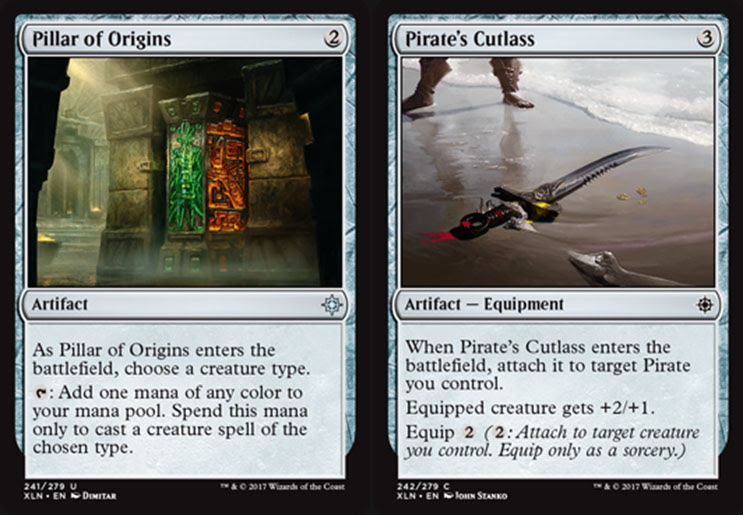 Pillar of Origins: It should help three and four color tribal decks with splash color(s).
Pirate's Cutlass: Zero equip cost for Pirates on the battlefield? I will take four for that deck. 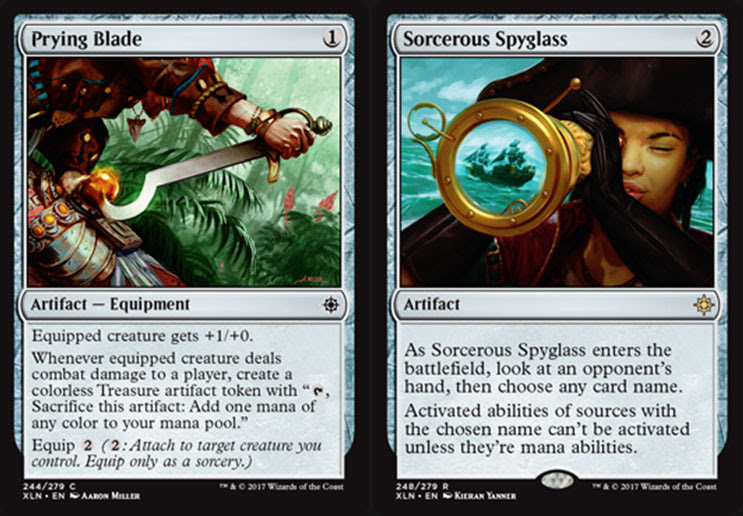 Prying Blade: It would have been amazing as a rare that gave the creature some means of evasion. By itself, the buff is too small to matter. The token-making part is great, though. Meant for Limited.
Sorcerous Spyglass: This card should have been in Standard for the past miserable year. It's a must have in all sideboards right now. 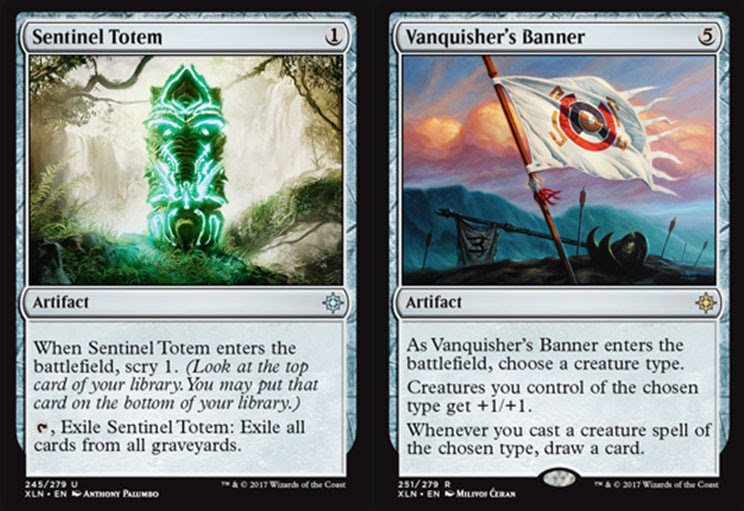 Sentinel Totem: A strong variant of Nihil Spellbomb (1 Artifact Tap, Sacrifice Nihil Spellbomb: Exile all cards from target player's graveyard. When Nihil Spellbomb is put into a graveyard from the battlefield, you may pay Black. If you do, draw a card.)
Vanquisher's Banner: It comes in a little too late, yet both bonuses are really good, especially the card-draw one. 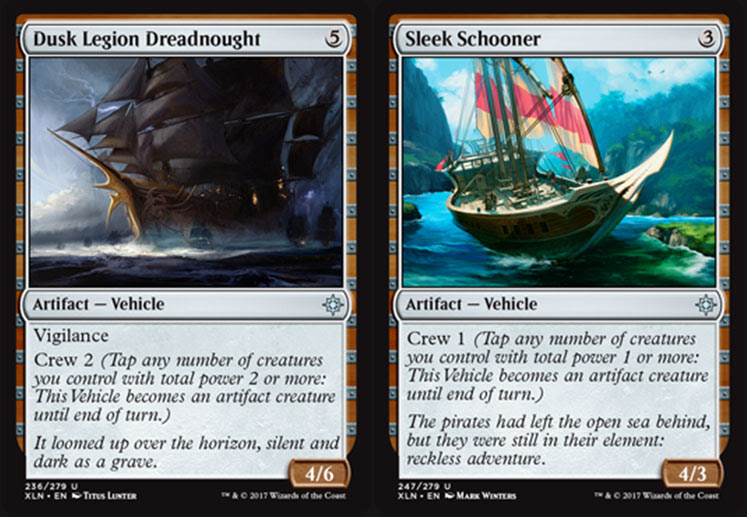 Dusk Legion Dreadnought: It's a seven drop with Vigilance. That's all right, and it has evasion because when it is not crewed, it is not a creature. I like it in Limited more than in Standard.
Sleek Schooner: It's a four drop minor beatstick. It should be good in Limited and Standard. 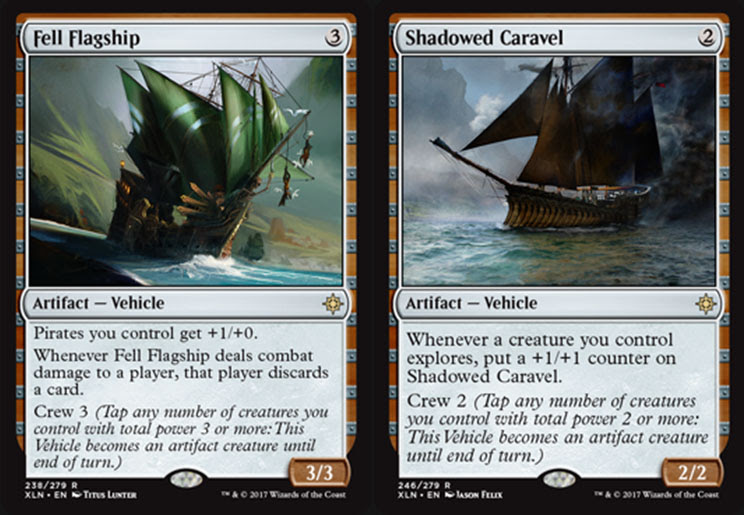 Fell Flagship: I buffs Pirates a little just by being on the field. The crew cost is steep for how little it hits for. If you can get it to hit face, the discard is great, but mid-game hitting for three is not guaranteed to work.
Shadowed Caravel: I like this one. It is perfect for the casual explore deck. It should get three or four tokens before I crew it. It can enter really early; I like that a lot.

The buddy lands are great casual dual lands. This set has the allied color ones. I already have them from the core sets. If you don't, this is a great opportunity to get them. 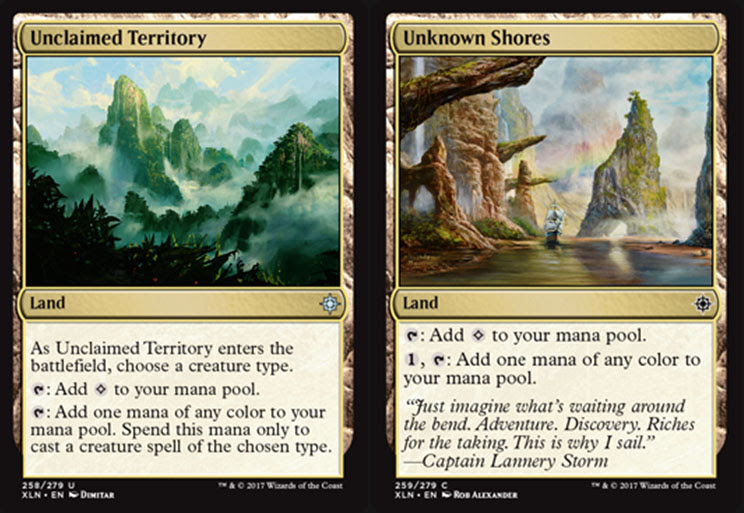 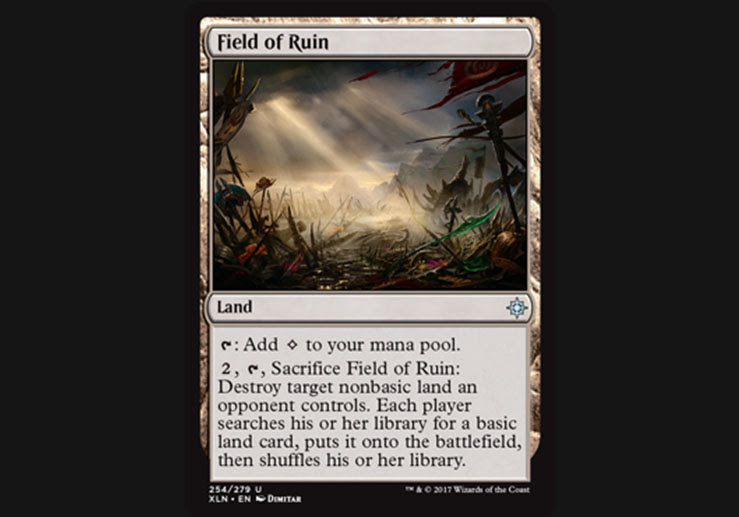