I don't like the frame of the land side too much. It reminds me of the World of Warcraft TCG. All of the non-artifact ones are Legendary. 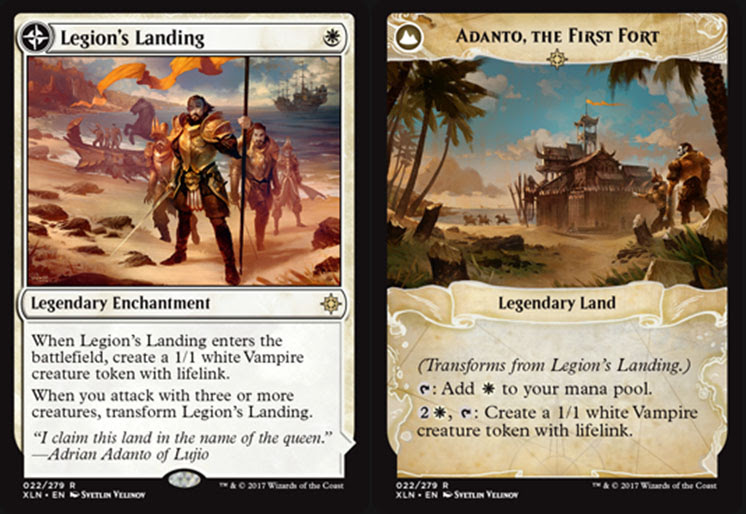 Legion's Landing: It can enter early and adds one creature to your count.
Adanto, the First Fort: The token cost is fair because its repeatable. 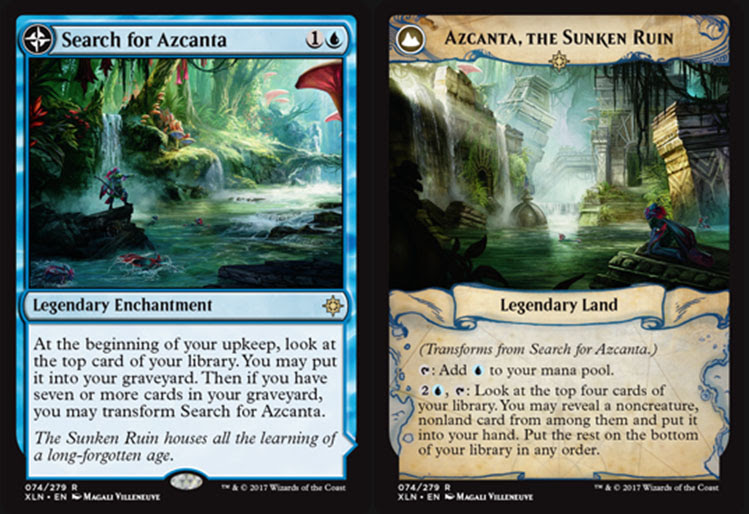 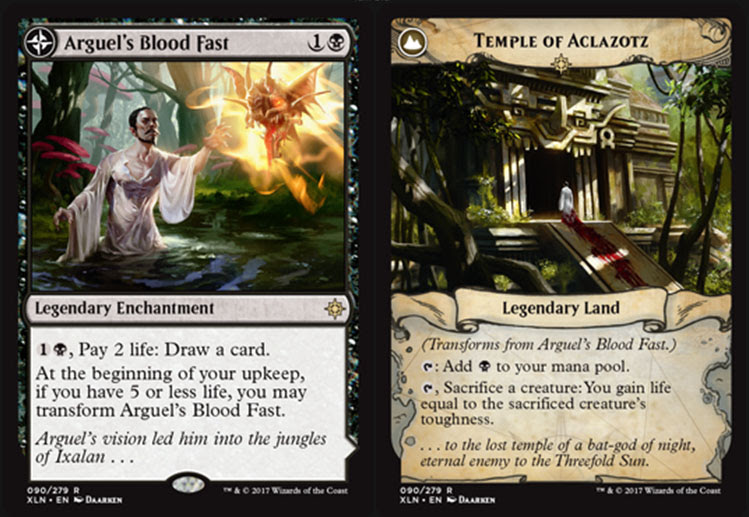 Arguel's Blood Fast: That is one close to a loss flip condition. It should go well with the Fateful Hour cards from Dark Ascension.
Temple of Aclazotz: After the flip, you can gain a lot of life.... am I missing something? I don't get why I would want to do that to get me to a win. 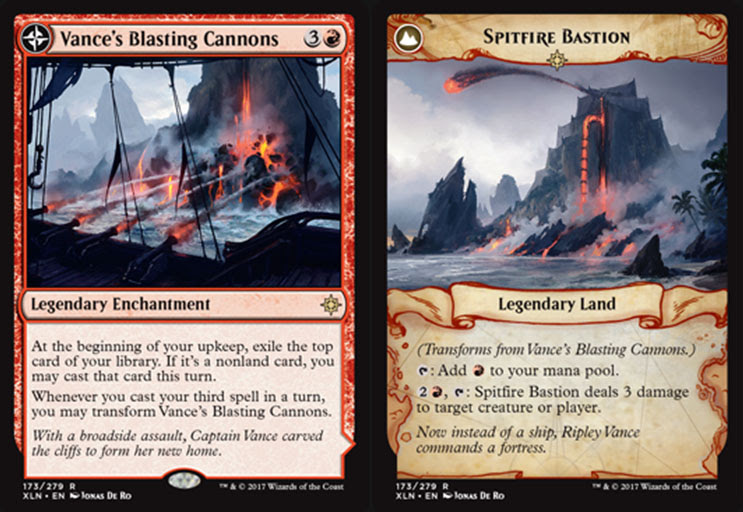 Vance's Blasting Cannons: It comes in mid-game, yet it should be really good to play. Three spells cast in a turn is doable.
Spitfire Bastion: "or player" means this is really good. It's going to do that every turn. I can also cast a spell that untaps a land. Hope Tender should help ( 1G 1, Tap: Untap target land. 1, Tap, Exert Hope Tender: Untap two target lands. (An exerted creature won't untap during your next untap step.) ) 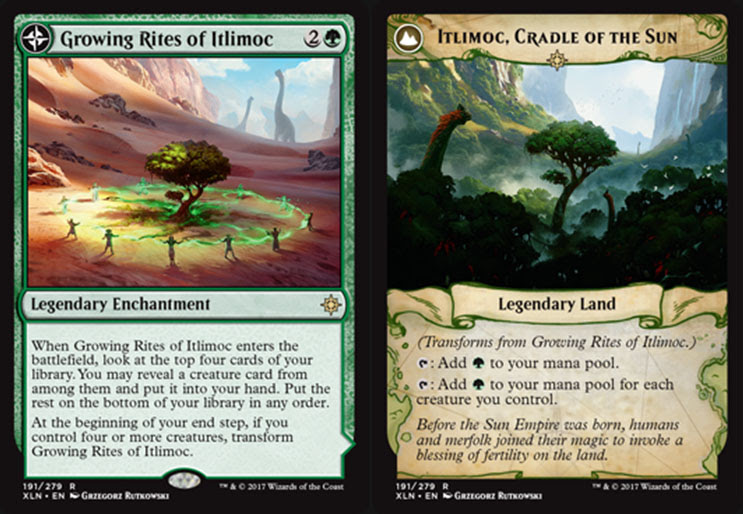 Growing Rites of Itlimoc: Depending on the deck you are playing against, it could be difficult to flip it. Against Black, and maybe Red, definitely. Still, it can be flipped most of the time.
Itlimoc, Cradle of the Sun: And if you do flip it, you have Gaea's Cradle, and that's simply amazing. 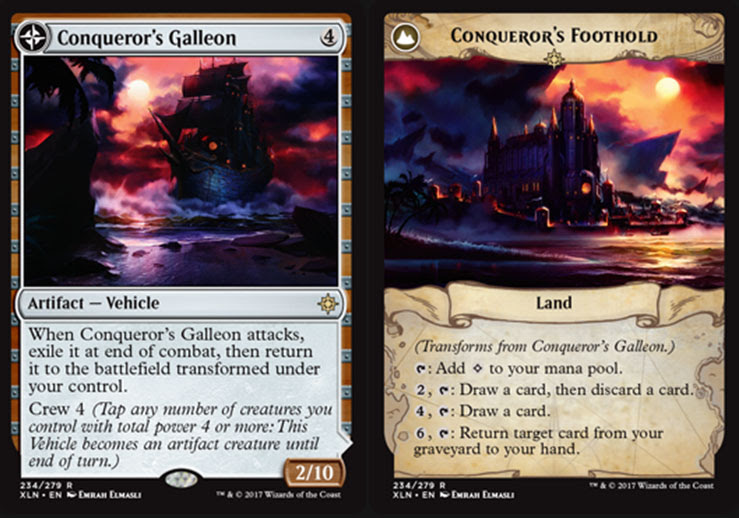 Conqueror's Galleon: In most circumstances, that is one easy flip. It has a high crew cost, yet it has a big fat butt.
Conqueror's Foothold: It has two different ways to draw a card. That's really good. It can also recover something big out of your graveyard (it costs a lot to do so, it will need to be something big). 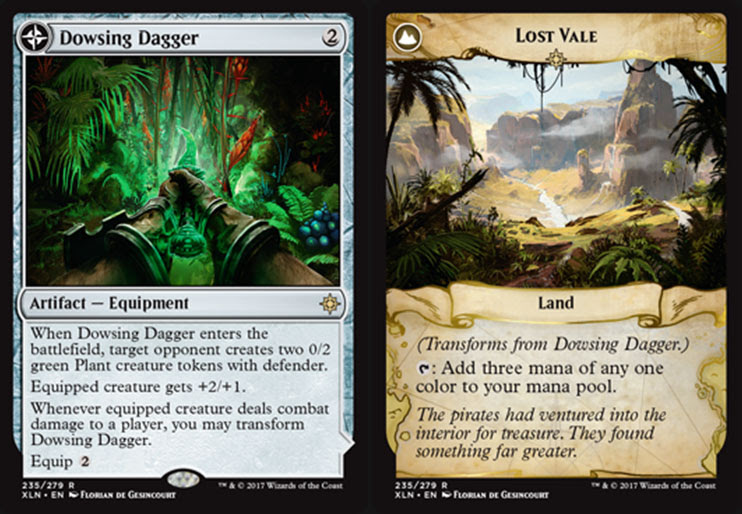 Dowsing Dagger: It can come in early, and delays itself by two turns with the tokens unless you have ways to take the tokens out either the turn it comes in or the next turn. The equip cost is fair and the buff is also fair.
Lost Vale: If you flip it, you have Black Lotus in land form. That should be an amazing boost. I wonder how this plays out when I compare it to the Black Lotus for the masses, Gilded Lotus (5 Tap: Add three mana of any one color to your mana pool.) This is hard to setup: you need to spend four mana to equip a creature, then the creature needs to deal damage mid game to your opponent-which means that an unblockable or Trample creature will do the trick best. 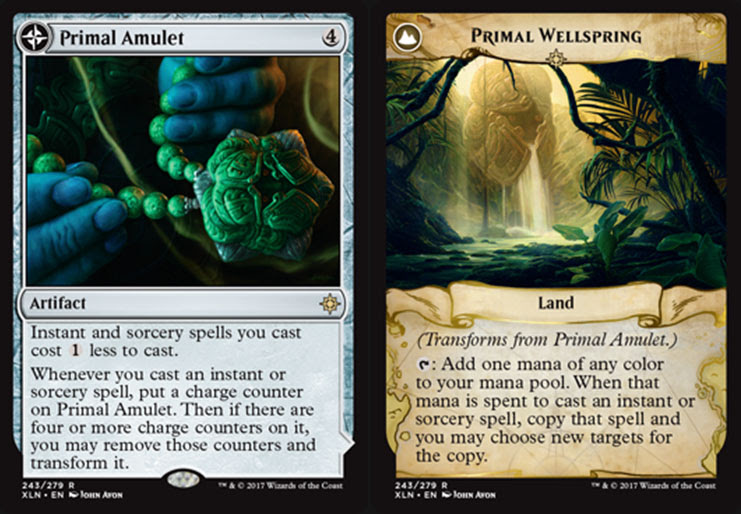 Primal Amulet: There are ways to put counters on this without satisfying the casting condition. Even if you don't flip it, and even if it comes a little, it makes all your instants and sorceries cheaper to cast.
Primal Wellspring: I would cast a card draw spell and repeat it. This should be a ton of fun to play. 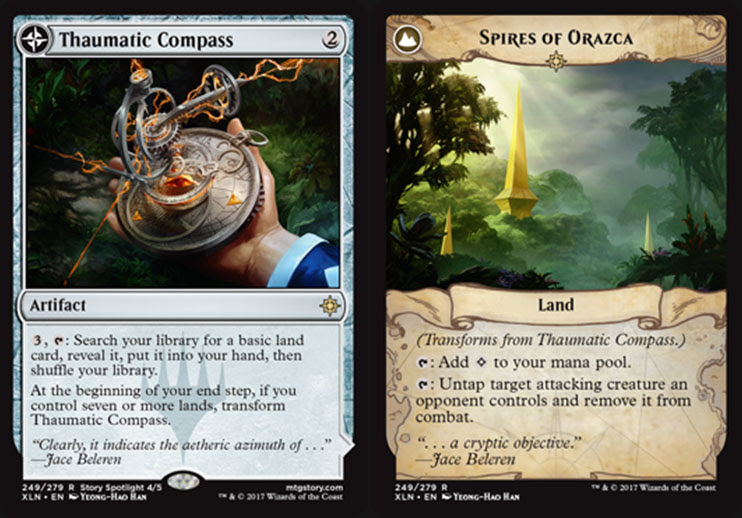 Thaumatic Compass: It enters early, and in the non-rotating formats there are many ways to get to seven lands fast. You will need to be in Green for this one.
Spires of Orazca: Strong in Standard. In the older formats, there are too many low or no creature decks. 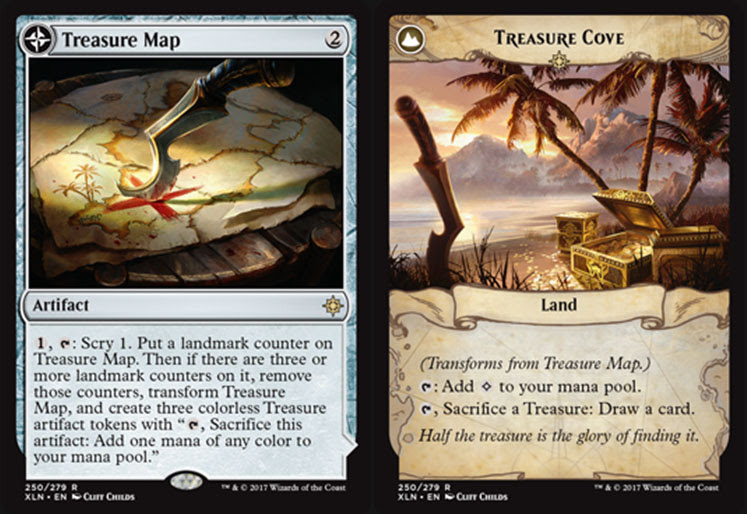 Treasure Map: Unless you untap it with Voltaic Key, it will take three turns to flip. The flip gives you mana that is more versatile than a Black Lotus because you can choose a different color for each Treasure token.
Treasure Cove: Turning Treasure tokens into card draw is really, really good.
Posted by Rubiera