I didn't find a lot of Johnny fun in White or Blue. Let's see how much of it I find in Black. I got spoiled by playing with a lot of the older cards. I still have a hard time wanting to play card effects at 1 more mana across the board. 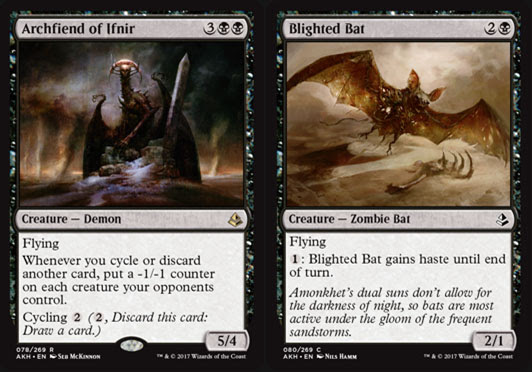 Archfiend of Ifnir: Surprising... a card with Cycling that is not aimed at Limited. It's pretty good. Against a wide field, you would want to cycle two or three times to get those counters on your opponent's creatures.
Blighted Bat: reads really good as a common. I would want to buff it. The 1 mana for Haste effect is great, and it's a flyer. Yeah, I want to play it. 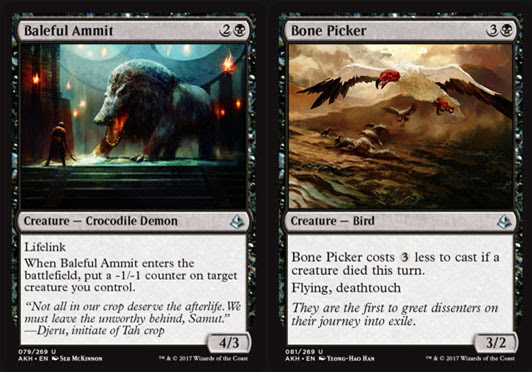 Baleful Ammit: Cool. I am planning to build a '-1/-1 counters' deck, and this card belongs in it.
Bone Picker: Now, this card has my attention. I love this effect. In black, a creature will often die this turn! I really want to play this card. 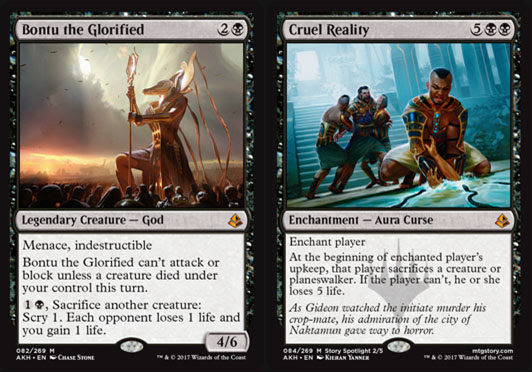 Bontu the Glorified: Before I even read this card, I am still a little traumatized by how bad the Blue God is. OK, let's read this. That isn't so great, but in black, lots of creatures can die. The 2 mana sacrifice clause is not exciting. Sacrificing a creature is not a cheap effect, even in decks where you want to do so.
Cruel Reality: EDH? 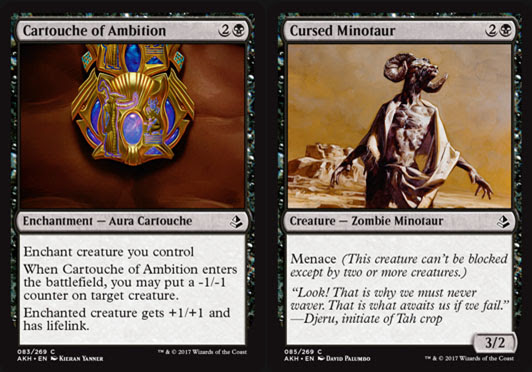 Cartouche of Ambition: a little heavy for the effects. It's still worth trying out.
Cursed Minotaur: solid. Menace is a great ability. I would definitely play it in Limited. 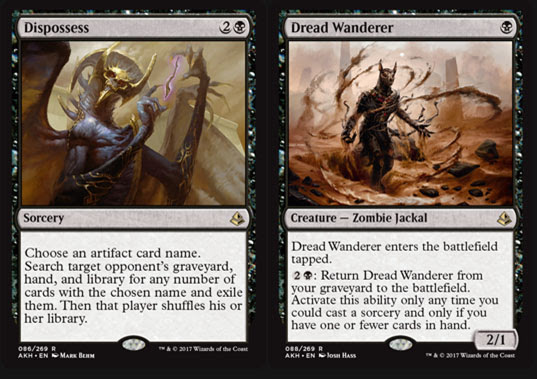 Dispossess: good to hose Kaladesh, and otherwise a sideboard card. But, yeah, if you are facing an artifact-heavy deck, this is a must-include card in your deck, and it's aggressively costed.
Dread Wanderer: I love Zombies, and I aim to build Esper Zombies in Standard thanks to Amonkhet. I don't like any 'card in hand' effects, except ones like this one. I want to play my cards, and this effect encourages me to do so. I want to play this card bad. 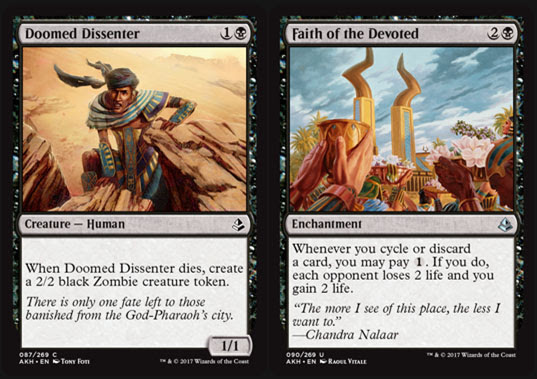 Doomed Dissenter: pretty good replacement effect. I want to play it.
Faith of the Devoted: As much as I have frowned on Cycling, this enchantment makes me want to put all those Cycling cards in one deck and four of these. I think that will be a ton of fun! 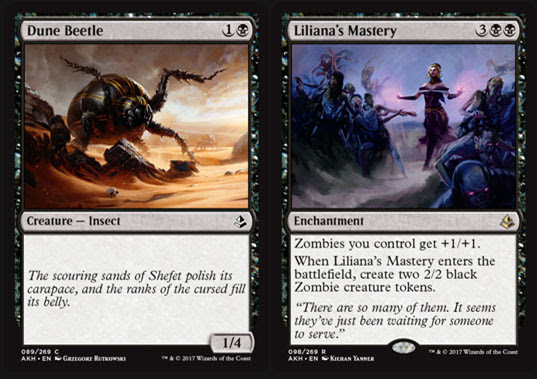 Dune Beetle: More vanillas, please; and some cards to boost them.
Liliana's Mastery: a little too heavy. I am not planning to put more than one or two in my Zombie deck. 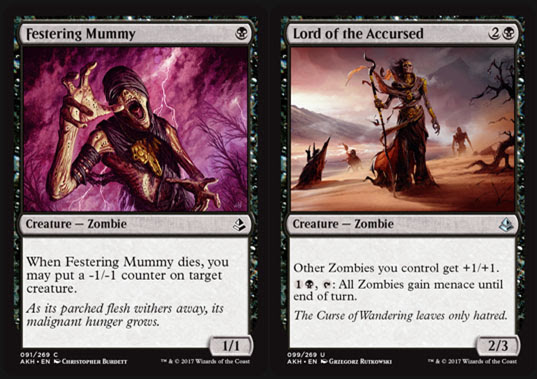 Festering Mummy: Similar to Fume Spitter, except instead of having the option to sacrifice it, it has to die by some other effect or event, like from blocking or another card that allows you to sacrifice it.
Lord of the Accursed: Another Zombie lord at 3 mana! This is a great card. I am not sure if it will make Zombies as powerful as Merfolk, but I will definitely try it and see how strong the mono-black Zombies deck becomes. Oh, and it's an uncommon. That's awesome! 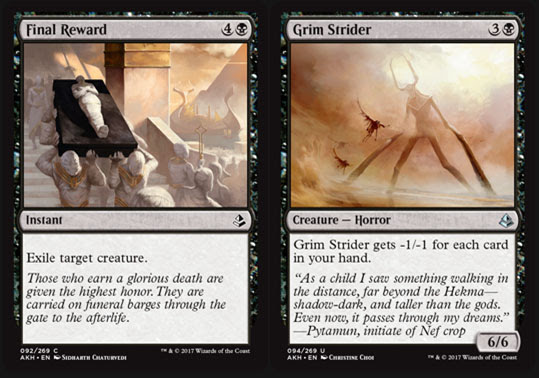 Final Reward: this is a very useful card. This effect has never been cheap-well, except in White with Path to Exile and Swords to Plowshares. Compare with Brittle Effigy, a Core Set rare (a 1 mana artifact with 4, Tap, Exile Brittle Effigy: Exile target creature."). Unmake, another example, costs three W/B hybrid mana.
Grim Strider: Interesting. I want to play it. 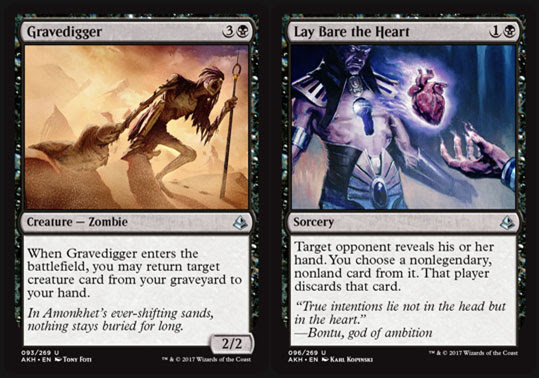 Gravedigger: Because we don't have a Core Set anymore.
Lay Bare the Heart: aggressively costed. It can get rid of a planeswalker. I want to play it. 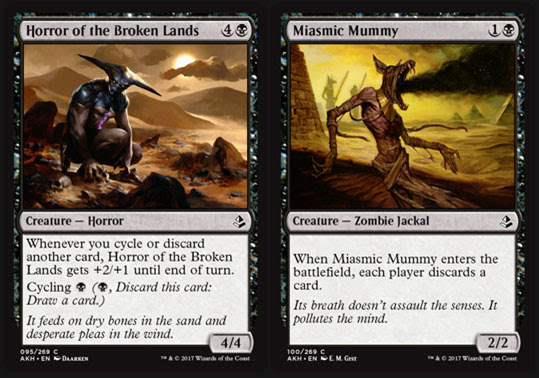 Horror of the Broken Lands: Limited.
Miasmic Mummy: Limited, and a solid trick if you know you will benefit from discarding to your graveyard more than your opponent. 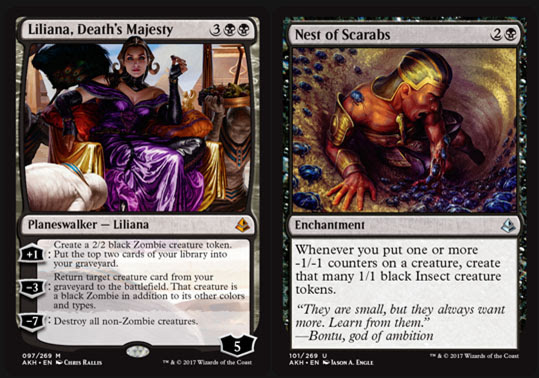 Liliana, Death's Mastery: A very Zombie-friendly planeswalker, even if costed for battlecruiser Standard. The +1 is great. The -3 is amazing. You can reanimate anything with that! Now that I think about it, this card may have a chance in Modern with the -3..... need to see it in play to figure that out. The ultimate is good, but not game-ending. I would probably never ultimate this planeswalker. I would +1 to survive, and then reanimate something HUGE.
Nest of Scarabs: this is the core of the '-1/-1 counters' deck, the Bitterblossom of that deck. I want to play it bad. 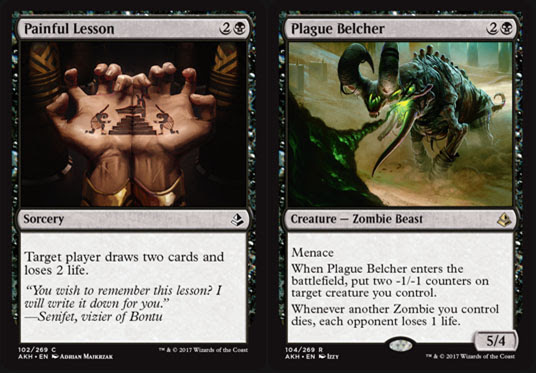 Painful Lesson: why do we need a SIgn in Blood for one more mana? Limited for sure.
Plague Belcher: I need creatures that don't mind having all these -1/-1 counters on them... This is an enabler for the exchange of -1/-1 counters with tokens out of Nest of Scarabs. 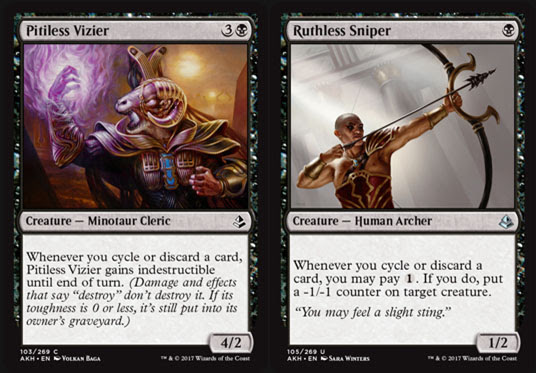 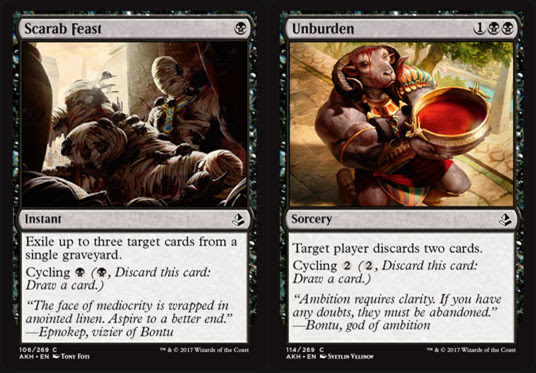 Scarab Feast: the Embalm hoser for this format. We will need it in many decks, at least in Standard. In Modern it's a lot easier to exile your opponent's entire graveyard with cards like Nihil Spellbomb.
Unburden: not bad. It has many uses in this Standard format. 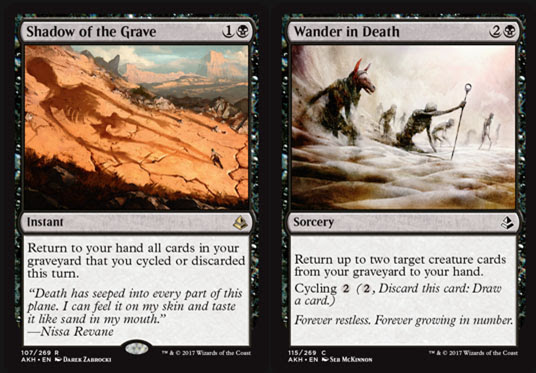 Shadow of the Grave: Now, that is one powerful rare. Yeah.... insane in this format. So many busted plays will come out of this card! Definitely a money rare. You could be cycling for a long time with the right deck and this.... a long time.
Wander in Death: Limited. A great way to keep a Cycling chain going. 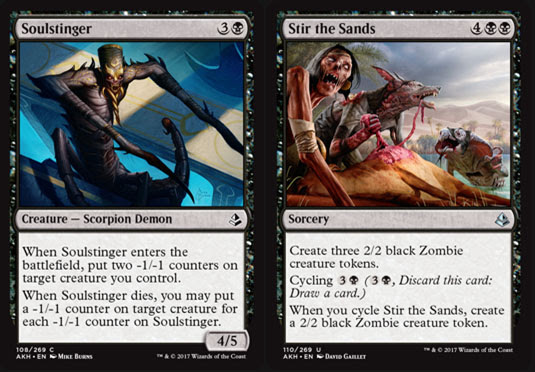 Soulstinger: Limited. I hope I can pull off a '-1/-1 counters' deck in Limited.
Stir the Sands: Comes in too late in a game to matter. Still a fun play in casual. 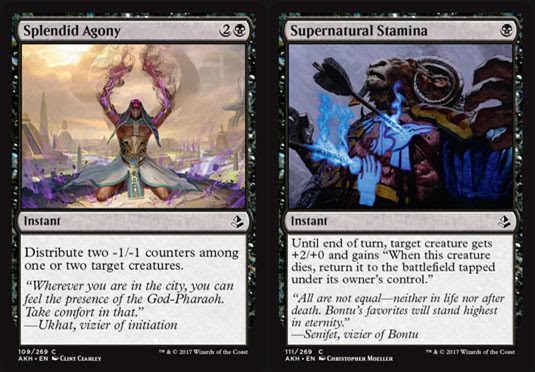 Splendid Agony: Limited.
Supernatural Stamina: seems stronger than it probably is. Limited. It reads like it needs too much setting up. 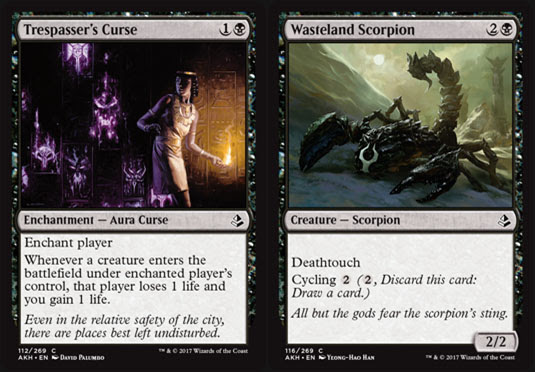 Trespasser's Curse: I like this card a lot. At face value, it seems like a good Limited card, which it is; but I think it is stronger than that. Early game it is a strong deterrent against a creature-heavy deck.
Wasteland Scorpion: Limited. 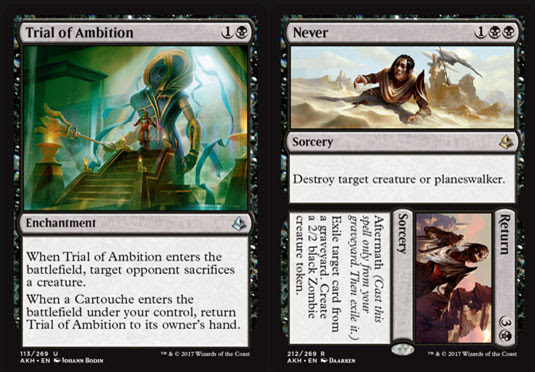 Trial of Ambition: this one is strong. Forcing your opponent to sacrifice a creature early game is often very disruptive.
Never//Return: (Great title!) A must-play for me. I want to play Zombies in this format, and this removes planeswalkers.
Posted by Rubiera