We need to get used to battlecruiser Magic. For every block since Return to Ravnica I have expected the common effects to remain at the same cost, but that has not happened. Many effects have been moved from Instant to Sorcery, and some have gotten one mana added. I am thinking of building an artifact cube (again!) and this time I want to limit myself to Scars of Mirrodin block and Kaladesh block. The power level of Kaladesh is more in line with the commons, uncommons, and junk rares of Scars of Mirrodin, There is no equivalent to Phyrexian Mana, which is fairly broken. Instead we have Energy, which looks Cohort-weak. Energy is just as parasitic as Infect, but a lot less powerful, which is fine since losing to Infect in three turns has never been fun.

Back to the set, let's do multicolored and the lands. I am leaving artifacts for last. 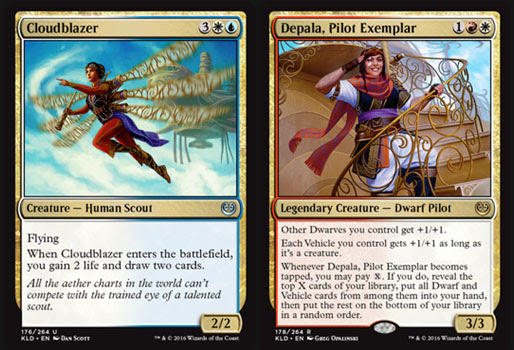 Cloudblazer: The card drawing is great. Nevertheless, this is a casual uncommon.
Depala, Pilot Exemplar: A dwarf lord is just plain awesome. There are so many cool dwarfs in Legacy. It also buffs Vehicles? What is not to like. This card is dripping flavor and awesome fun. I want to build a dwarfs deck with it. 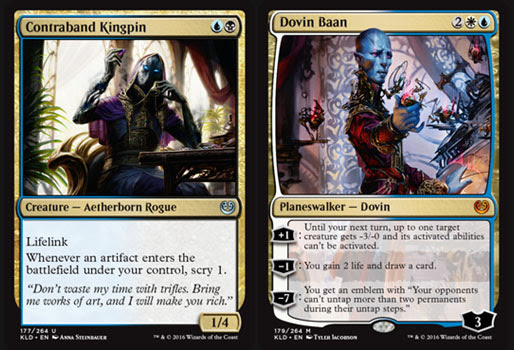 Contraband Kingpin: I like it a lot. Scry 1 early game is great. It passes the Lightning Bolt test in Modern. It needs buffing to make the Lifelink useful. Esper artifacts reanimator in Standard? I want to try that.
Dovin Baan: The +1 is a great way to protect this planeswalker. The -1 life gain is lame but the card draw is most definitely very not lame. The ultimate is Tamiyo-quality. I like it a lot. It feels strong and possibly game-ending. 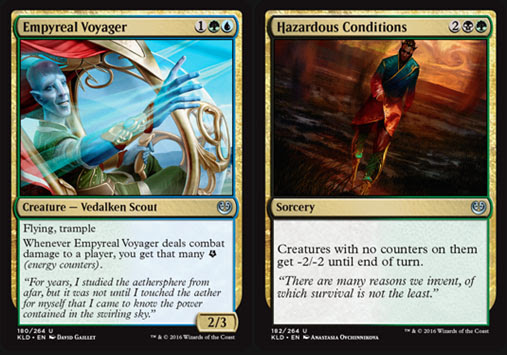 Empyreal Voyager: I love this uncommon. I want to make it unblockable in Modern, and power it up somehow. Energy feels weak, but you never know. If you make it hit for 4 or 5 as unblockable, this is your Energy engine for most of your deck.
Hazardous Conditions: Too much of a setup. I would have to keep it in the sideboard. Who doesn't love counters? You should expect counters in many decks in all formats. If you are running all counters in Green/Black though, this can kill your opponent's creatures and leave yours intact. It could be a really good effect if built around well enough. 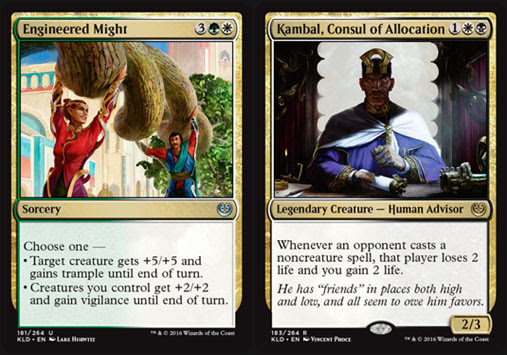 Engineered Might: Title reminds me of Engineered Explosives. Not bad in a casual deck. It's a solid uncommon in Standard. Most 5-drops in Modern need to win you the game that turn or the next turn. This card is not doing that for you in Modern.
Kambal, Consul of Allocation: I love it. And yes, I must mention my Blood Artist deck. I want this in it. I may even be able to build a Commander deck with Kambal as my Commander. I want to have some Death and Taxes cards with this Commander to limit all of my opponent's options. 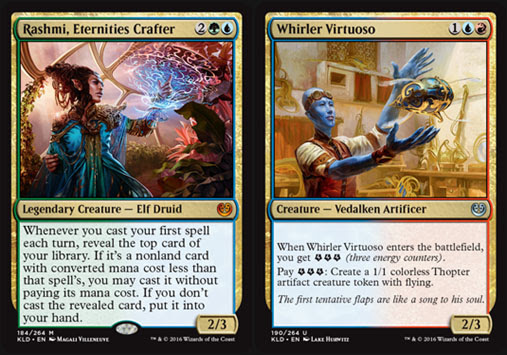 Rashmi, Eternities Crafter: Wall of text. Let's dissect it. You cast your first spell. You have already drawn for the turn, and maybe you dropped a land. OK. Now you reveal the top card of your library. That spell can be a free cast if it's CMC is less than the spell you first cast and if its a non-creature spell. That means you need to have lots of artifacts, enchantments, planeswalkers, instants, and sorceries in your deck. It also means that you should cast the biggest CMC spell you can as your first spell. You will need to leave some room for counterspells, and so you should not spend all of your mana for that first spell. We are talking Bant Control here. You need White to have access to strong control cards like those in Miracles. I should try to build for this card in Modern, Legacy, and Vintage, and see what happens. You are still getting the extra draw to your hand if it does not fit the criteria. This is such an awesome Johnny card. I love it! Awesome design, Wizards, you all rock! I hope it is not an expensive card. Spikes can win games with other cards. This one is just for us Johnny deckbuilders.
Whirler Virtuoso: The token cost seems a little too heavy. It's a fun uncommon, but I am still uncertain about how strong the cards that are in the Energy economy will be. They are definitely nowhere near as strong as Phyrexian mana. Or at least that is my uninformed opinion before I play with the cards. If I lose to all those great Limited players and they beat me with Energy, I will change my mind about the relative strength of the Energy cards. 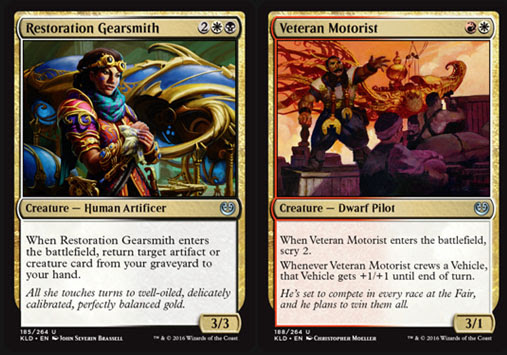 Restoration Gearsmith: The return is a nice bonus. One more card for Esper reanimator. If the next block has the shards of Alara, the cards in this set that have shards themes will fit right in with those cards.
Veteran Motorist: I like the aggro power. A White/Red Vehicles deck? I hope I can try that. 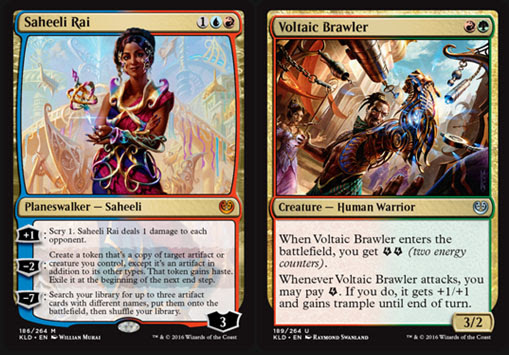 Saheeli Rai: I can barely read this text. The +1 is most amenable for a multi-player game. In one-on-one games that 1 ping is not that great. The Scry 1 I think is the better part of the deal most of the time. On to the other abilities:
(-2: Create a token that's a copy of target artifact or creature you control, except it's an artifact in addition to its other types. That token gains haste. Exile it at the beginning of the next end step.)
That artifact, creature, or artifact creature can be so many different cards! This is a great -2. One of my favorites would be Wurmcoil Engine in Modern.
(-7: Search your library for up to three artifact cards with different names, put them
onto the battlefield, then shuffle your library.)
It feels like Intuition (3 drop Blue Instant; Search your library for three cards and reveal them. Target opponent chooses one. Put that card into your hand and the rest into your graveyard. Then shuffle your library.) Except they need to have different names and you get to play all three. This is a truly awesome ultimate, and when played well, should end the game.
Voltaic Brawler: Did someone make a mistake in the power/toughness? If they didn't, this is a really strong uncommon. Its a 2 drop 3/2 that gives you 2 Energy and it can become a 4/3? I want it. 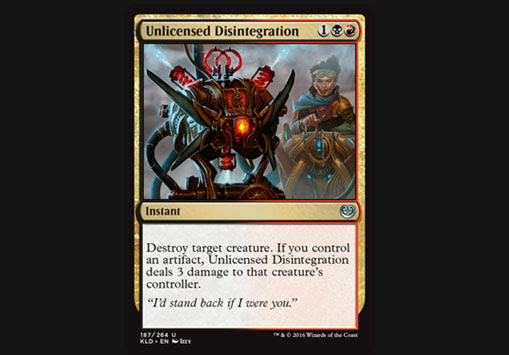 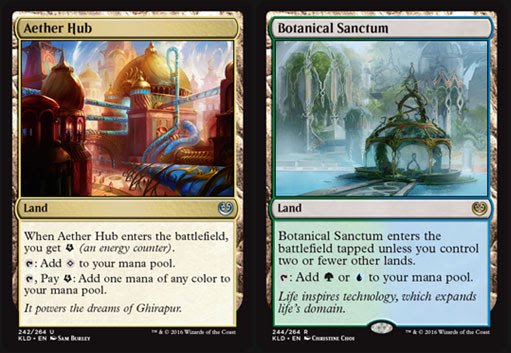 Aether Hub: The Energy land at uncommon is good, especially for Limited. 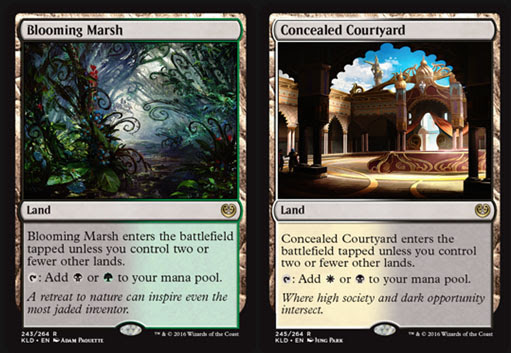 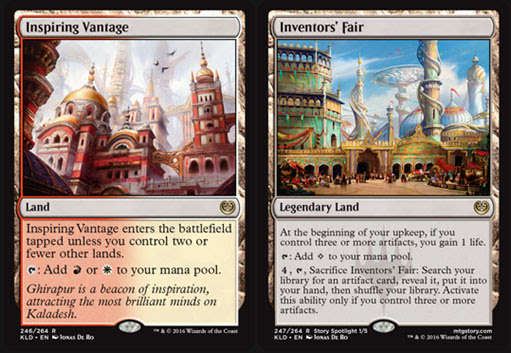 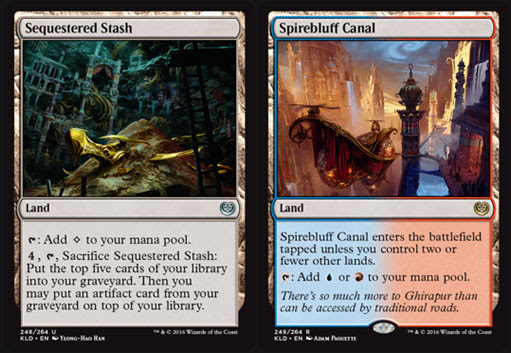 Sequestered Stash: Solid sacrifice clause to fetch an artifact from your graveyard. It can be an artifact that was there before.
Posted by Rubiera