I had been scanning old Yugioh sets and really needed some money (such is the plight of us poor folk), and decided to sell my entire MTGO collection to Cardhoarder (thanks! great transaction!). Now, I am starting from zero with 116 NYX and BNG free cards from the Cardhoarder and MTGOTraders free bots (thanks!). 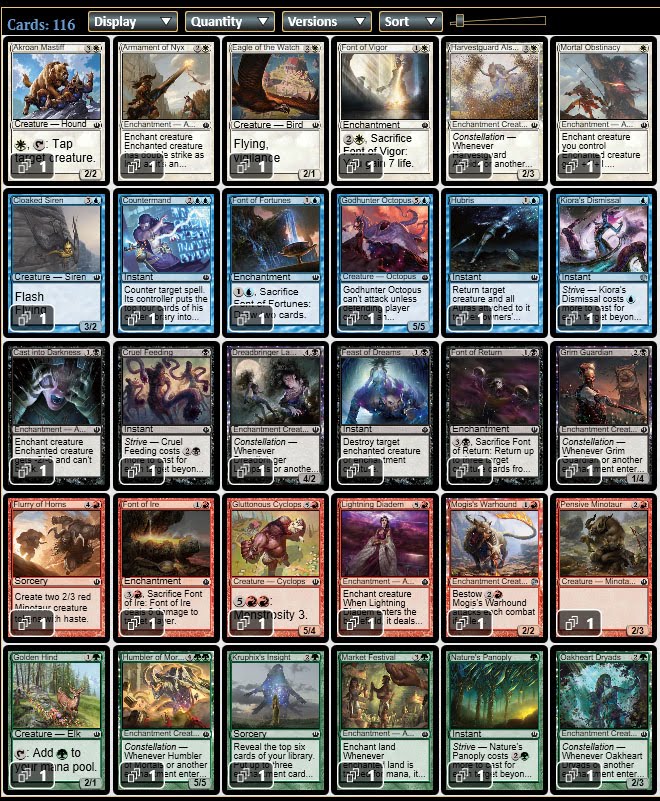 I had stopped playing against other players completely for two reasons:

1. Chat allows the most toxic players on MTGO to ruin the fun for everyone else.
2. There is no casual scene. You either play a money deck and take the heat from the trolls, but at least you get to play, or you pilot in solitarie, which is all I really wanted to do by the time I sold off.

I am back now, and don't plan to build up a money collection like the one I had. MTGO does not have a casual scene. I had thousands of beautiful Vintage and Legacy cards, and no one to play them with.

My next project is to pilot decks for what I think would make a great casual set for new players: a double set, something like Tenth Edition. This is the set I have always wanted; a set not for Limited, which I have never liked. I think Limited makes Magic a lesser game than it could be. That's just me.

From here on I am on the penny card and crap booster pack bandwagon. I am eyeing those 40c Theros booster packs right now...
Posted by Rubiera