[follow this link to the previous phase of standard-to RTR]

By now I am done with Gatecrash decks.

Mono decks are great to get started with deck design. To start with, you save money on having to run all those expensive dual lands. Sure, you can run some special lands that have useful abilities, but you are not going to be having mana problems that are encountered when you run more than one color.

These decks revolve around Maze's End, a mythic land in DGM. The set has not come out yet. Decks now are just shells in preparation for when Maze's End is issued.

1. This is a fourth or fifth iteration. The deck is very, very slow without Temporal Mastery. At first, I got just one from the bots, but this deck can only be sped up with a playset (I am sure the bots are happy about that). I also added Index because I want to get Temporal Mastery coming my way as soon as possible. I tried everything that is a creature with a gate advantage, but these cards proved ridiculously slow and ineffective. Crackling Perimeter, though, is a keeper.

1. Mono White in Gatecrash Standard. I like Boros Elite, except that it is a beacon for removal so often that it is mostly a way to let your other creatures attack.

1. Mono Blue in Gatecrash Standard. This deck is surprisingly effective. I have finally learned to use the various types of blue control cards. The blue cards that move a card on the battlefield to your opponent's hand, or even better, to the top of their library, can be very useful.

1.Rats Deck Gatecrash Update. It will take me some time to update all of my decks with Gatecrash cards. I am always balancing my limited budget with the demands of each deck. Here is the rat deck with a new rat from Gatecrash and the new rat lord (Ogre Slumlord).

2.Mono Black in Gatecrash Standard (no rats!!!). This deck uses the combination of Bloodthrone Vampire and Black Cat. It also has fliers, life gain, and some removal as well card discard.

1. Mono Red in Gatecrash Standard. I have not yet gone goblin-crazy, still in my rat-crazy phase, but I can see myself having lots of fun with goblins. Foundry Street Denizen can be pumped.

1.Mono Green in Gatecrash Standard. This deck is very efficient. The time I took to work with mono-green back in Innistrad Block Constructed is beginning to pay off.

1. Mono Artifacts in Gatecrash Standard. I dare you to win a single game with this deck! Even though I have taken great pains (and money to the bots) to have all useful artifact creatures in the current standard, we just are not in a pair of blocks that have enough artifact creatures for an artifact-only deck. Still, it was worth a try. If I make it to turn 8 before I lose, I consider that game a success for this deck!

Thanks to the Return to Ravnica naming conventions it is easy for players these days to refer to each of the ten two-color decks that are possible by their Ravnica guild name. With Gatecrash, it looks like Gruul, Simic, and Boros are showing some dominance.

1.Dimir Milling Deck in Standard Gatecrash Milling is a poor man's strategy, and so be it, I am not planning to money-up any decks in Magic. Milling is very budget-friendly.

1. Gruul Deck in Gatecrash Standard. Once you have a play set of Rancor, believe me, you will play all four cards in every single deck you can play it!!! 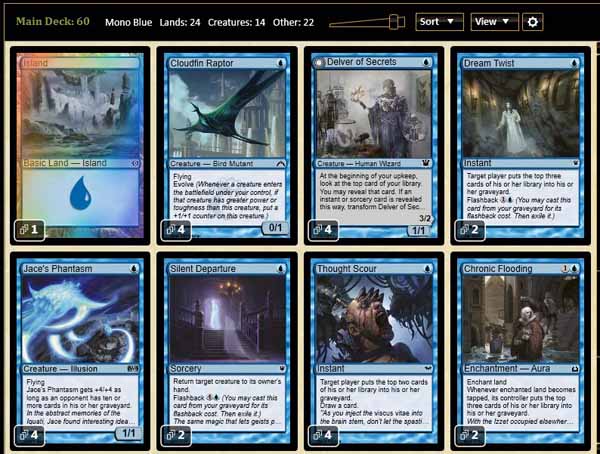