I will leave double-faced cards, or DFCs, for a separate section. OK, white had me thinking graveyard, let's see what blue has to offer. 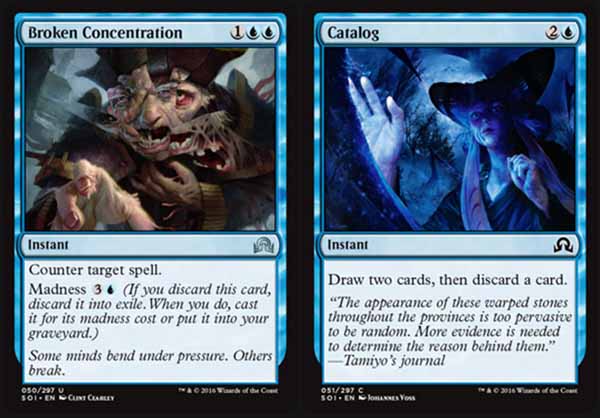 Broken Concentration: this block's variation of Counterspell (Legacy-Vintage)/Cancel (Modern).
Catalog: me likes. Its always great to draw first and then discard second. This is this block's Divination. 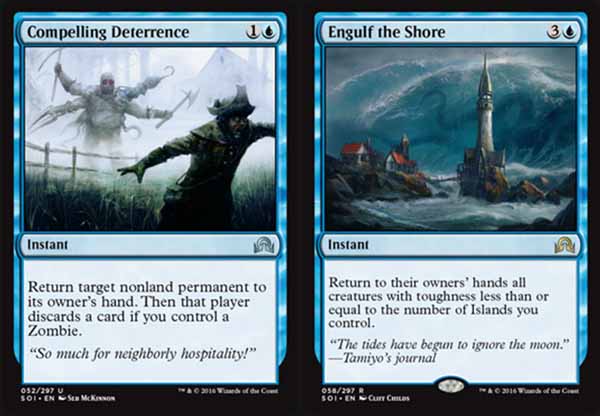 Compelling Deterrence: aggressively costed. Nonland permanent can be a planeswalker. I like this card a lot. Let's keep on reading in case we can pull a blue/black Zombie deck, in which case we can also combine them with the original Innistrad blue/black Zombies. Its a discard outlet for my own Delirium trigger... I like it more after a second reading.
Engulf the Shore: in monoblue you can control a lot of islands before you play this. This card reads at least good in Standard constructed, could even see play in Modern. 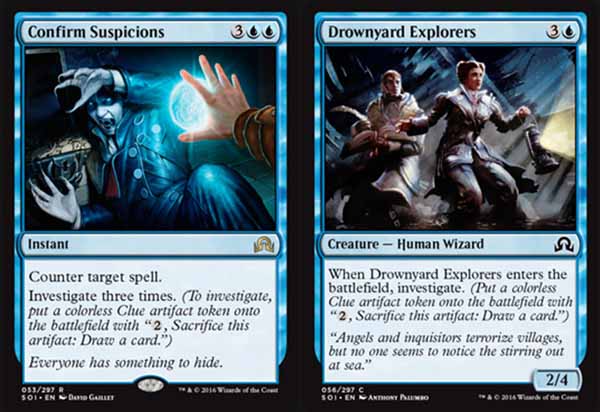 Confirm Suspicious: I would love to play this late game in monoblue just for fun. Its a five-drop, though. I would have to have a pile of mana late game and then play this... I don't know.
Drownyard Explorers: limited. 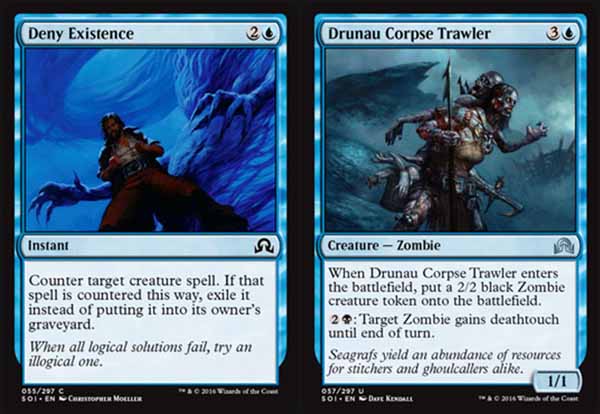 Deny Existence: Dissipate at common, same casting cost, but single blue instead of double blue mana? count me in! You can only use it counter a creature, though. That's good in Standard these days, I will take it.
Drunau Corpse Trawler: I am building a blue/black Zombie deck all right, and this baby is in it! Flicker time! 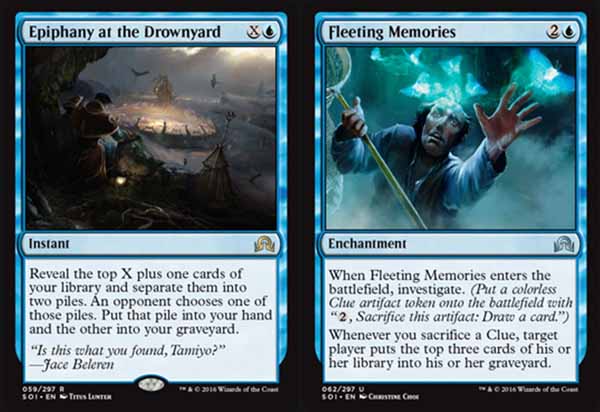 Epiphany at the Drownyard: I love Fact or Fiction effects. Unless this card becomes ridiculously expensive, which I doubt, I plan to play it, and in mono-blue!
Fleeting Memories: interesting... I am thinking... I am still thinking. This one is on my 'play' list. I am milling while I am drawing extra cards. Milling can be annoying, although nowhere near as annoying as land destruction, latter easily the most un-fun way to play Magic. Its still worth a try. Its 'target player' and that means it can be used as a self-mill outlet. Reads useful. 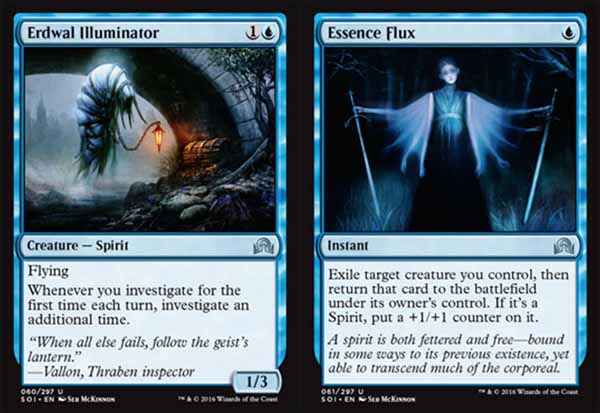 Erdwal Illuminator: Oh, I like this one a lot. A second Investigate on a two mana body deserves constructed play.
Essence Flux: one drop one time flicker at instant. I am game for that. I am liking blue in this set a lot already, and I am not even half-way down the list. 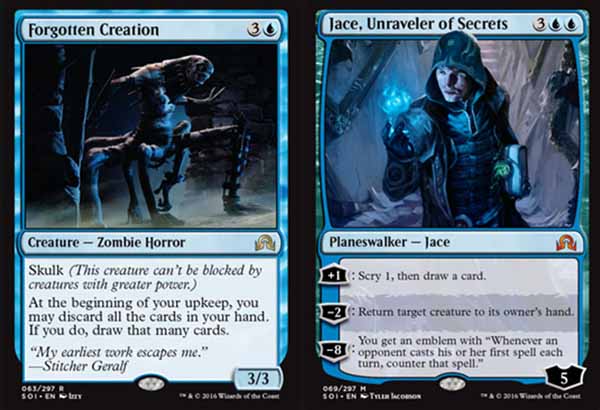 Forgotten Creation: I would almost be tempted to buff up my opponent's creatures and incapacitate them with something like Ghostly Prison [2 White (3)] Enchantment (Creatures can't attack you unless their controller pays 2 for each creature he or she controls that's attacking you.) The second ability says self-mill. Is there a Dredge deck in this format?
Jace, Unraveler of Secrets: I think this Jace is destined to be strong in Standard constructed. The +1 is really good: draw one additional card every game is really good, and you can Scry 1 before your do. That's ridiculous in Standard constructed. A five-drop planeswalker in Modern not Karn not Ugin is a tough sell. The -2 ability is like a fixed Jace, the Mind Sculptor. The ultimate can be a really strong shutdown if all your opponent is doing is drawing one card into an empty hand, but it does not read super powerful... will have to see it in play, and since I am a budget play, will have to see it in play against me. 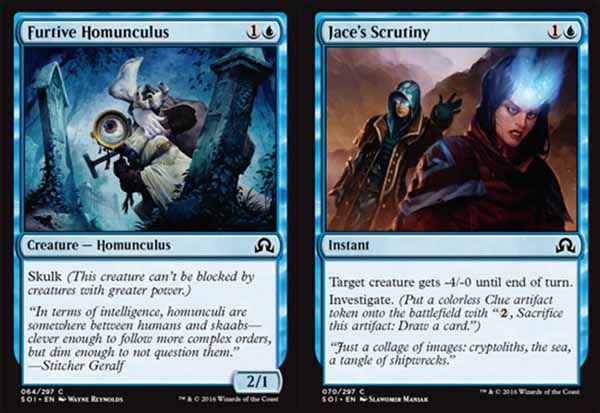 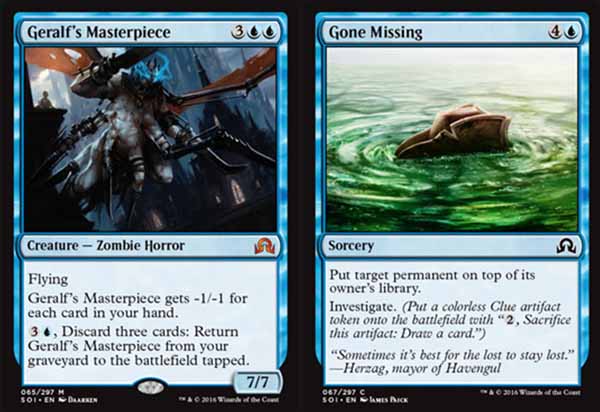 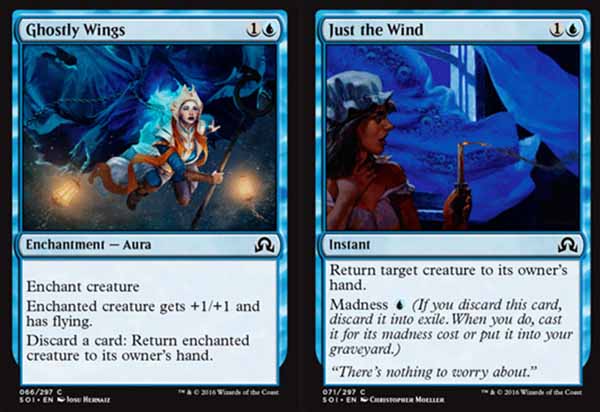 Ghostly Wings: limited, and good in limited because your creature can fly and be saved from a target destruction swing.
Just the Wind: limited mostly. You are using a whole slot to return something that can be cast again. Seems most useful in monoblue. 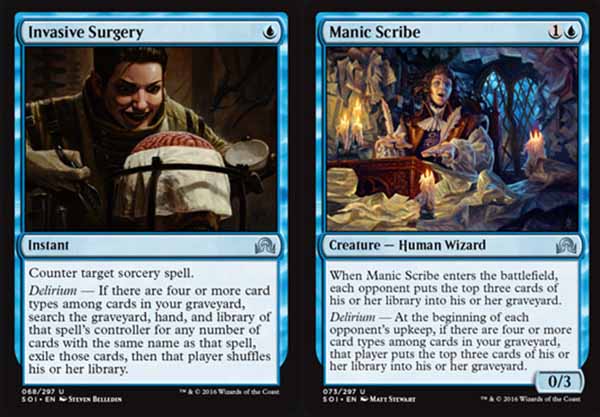 Invasive Surgery: low cost but a limited counter. Yes, countering the right sorcery will be useful, but this thing could be dead in your hand. I say sideboard, and in a second game can be really good.
Manic Scribe: reads very good in a milling deck. 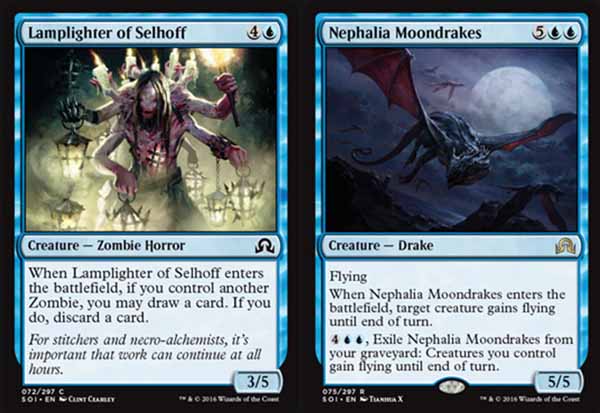 Lamplighter of Selhoff: limited. Nice that you draw first, then discard (remember Tibalt?).
Nephalia Moondrakes: reads like a junk rare. It has cool effects that are all expensive. It only gives flying to one of your creatures. 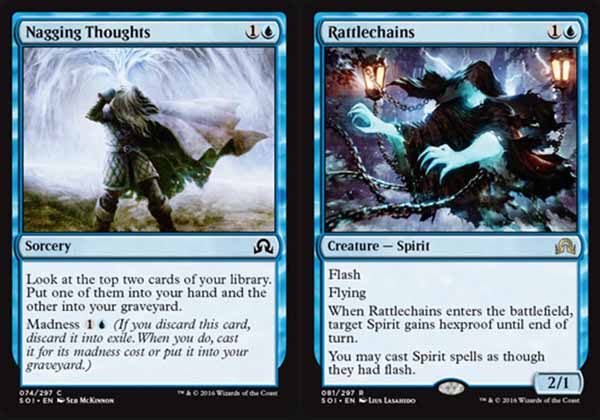 Nagging Thoughts: limited.
Rattlechains: reads great. Flash and Flying bring memories of very powerful cards (Snapcaster Mage, Vendilion Clique). I am putting this one on the list of potential chase rares. Its a shame that Prophet of Kruphix is not a Spirit. 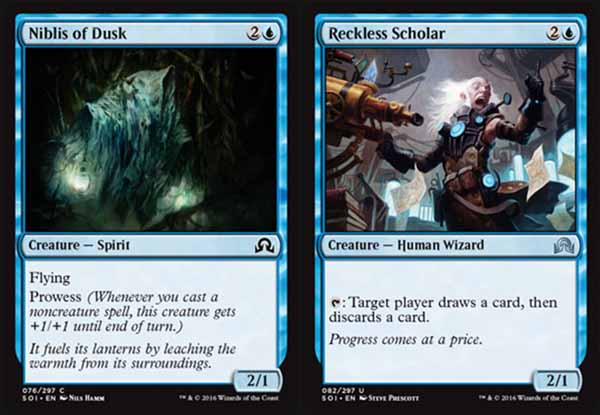 Niblis of Dusk: Prowess is a great ability on a common. I can see limited grinders loving this card.
Reckless Scholar: You are drawing first, and that's good. One more card to put into a Tibalt deck ust because I some day want to see Tibalt in a successful deck. 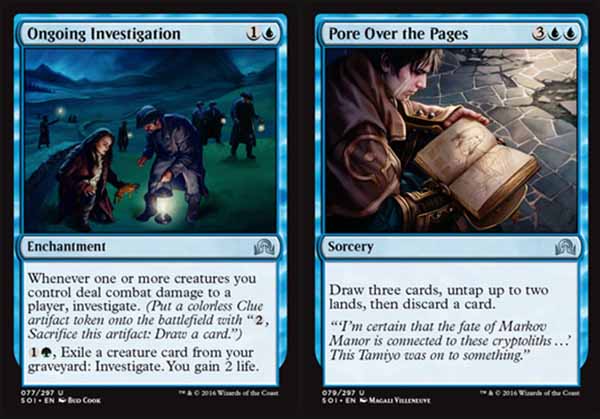 Ongoing Investigation: an intriguing card. Its in blue/green and has a graveyard ability. It would have been way more interesting in Khans of Tarkir. Maybe this card didn't make that set and was placed in this later set. I like it. I want to see what it does.
Pore Over the Pages: similar to Rewind, but for drawing cards instead of countering a spell. Seems interesting enough. 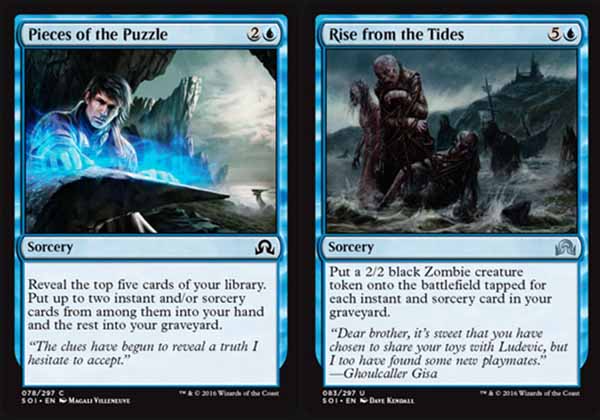 Pieces of the Puzzle: it reads like a good card. I am surprised its a common. I like it allright.
Rise from the Tides: should be fun in a casual blue/black Zombie deck. 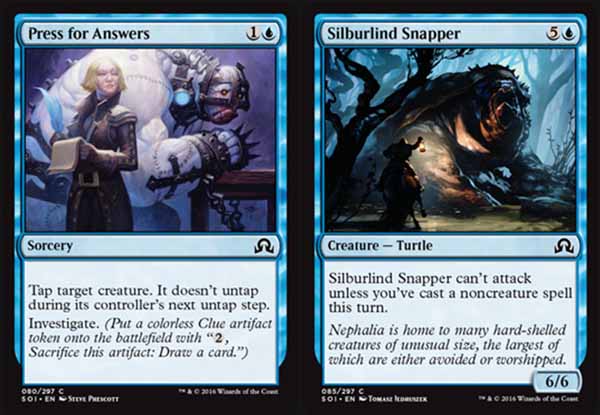 Press for Answers: limited. Its a great Tamiyo helper (could this mean that Tamiyo is in the next set? I sure hope so).
Silburlind Snappers: limited. 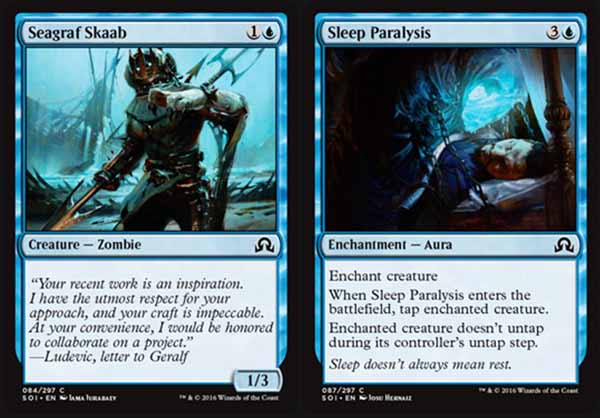 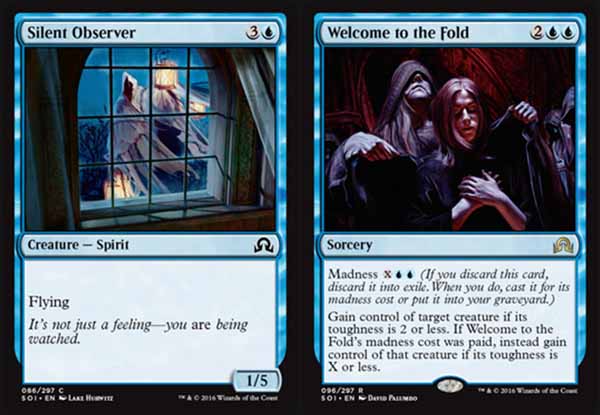 Silent Observer: limited.
Welcome to the Fold: aggressively costed in blue, an interesting card, but the X costing can make it dead in the hand a lot. 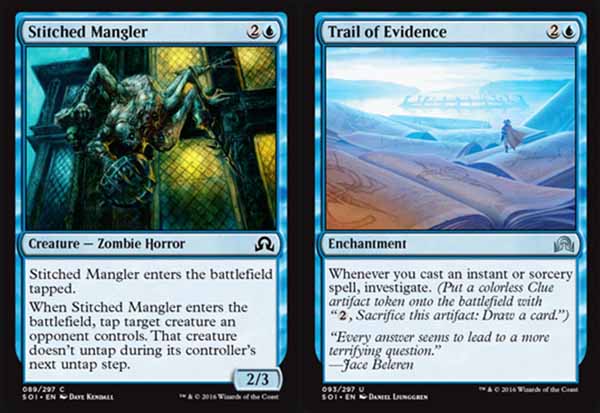 Stitched Mangler: limited.
Trail of Evidence: if Investigate is going to be good, this card will tell us. If its not, this card will also tell us. This is the Awakening Zone of this set. What's more, I would love to see a battlefield where I controlled both. (And after my positive pre-release experience with Investigate, I am definitely planning to try this card out). 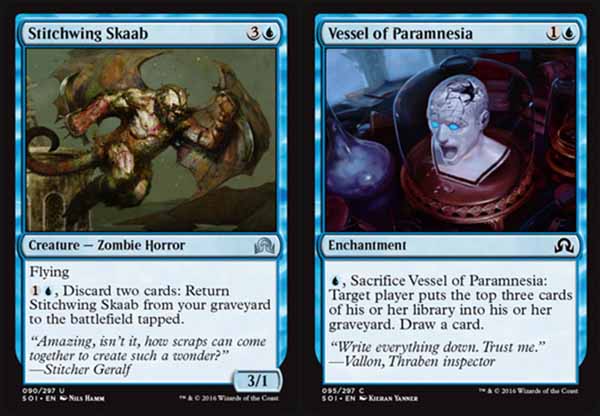 Stitchwing Skaab: if you self-milled and can afford the discard (or will benefit from a discard), its a 2 mana 3/1. Its worth checking out and its a Zombie.
Vessel of Paramnesia: limited. As a terrible limited player, I would add this to my deck and then realize why I suck so much at it when I played it.