I will leave double-faced cards, or DFCs, for a separate section. 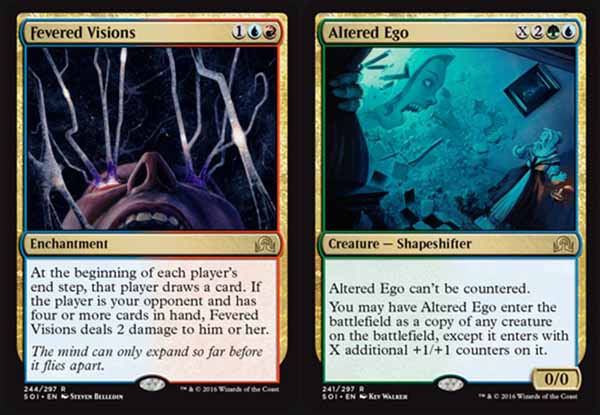 Fevered Visions: everyone is drawing extra cards. You would have to make sure your opponent is discarding to get this to work, and that's not that difficult. What's harder is to have your opponent with lots of cards in their hand. I am not seeing how this card will trigger the damage often enough to make it worth playing.
Altered Ego: I love that it can't be countered. That is just awesome. I would make sure the copied creature has Hexproof. 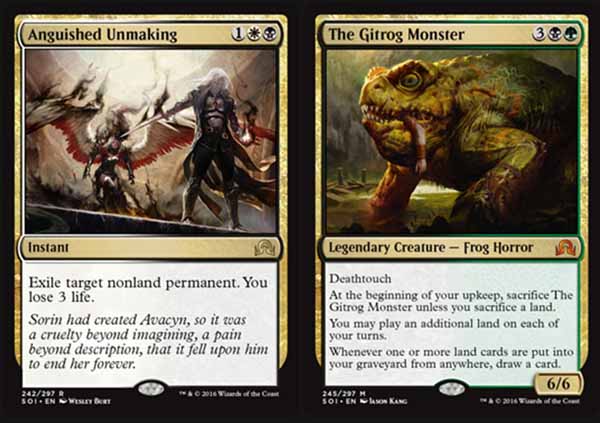 Anguished Unmaking: exiling at three mana is really strong, even if it costs three life.
The Gitrog Monster: its legendary, and that's a limitation. It requires a deck with really good land management. I don't like sacrificing lands, but if you have a deck that always has lands, I guess its OK. I will let someone else make the best of this card. Hopefully, they won't do so against me. 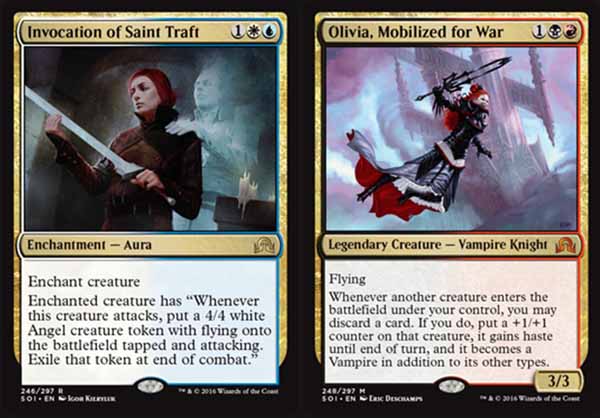 Invocation of Saint Traft: you would have to put it on a creature that doesn't die easily. If you do, its a great card.
Olivia, Mobilized for War: its legendary, and that's a limitation. The creature you cast is getting Haste and one counter. That's good, but not crazy-good for a mythic. The Innistrad Olivia was a much stronger card. 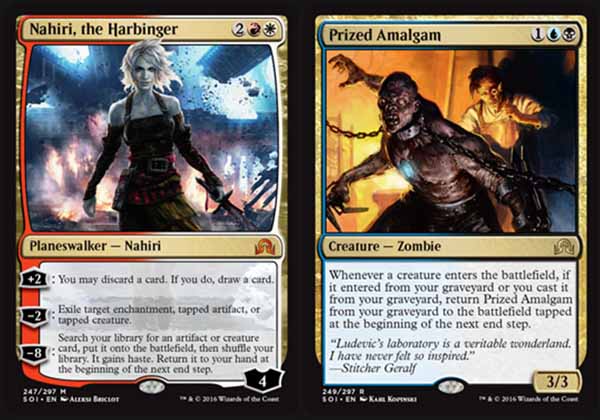 Nahiri, the Harbinger: it protects itself really well with a +2. I don't like discard, then draw, but since you are choosing what to discard, its a great way to complete the set of four types to trigger Delirium. The -2 seems difficult to trigger unless you have ways to tap. The ultimate is great if you have a clear field, and you only get to swing once. Then, you have to cast it again... These three abilities are covering a lot of different scenarios and are not as coherent as those found on other planeswalkers.
Prized Amalgam: the clause reads great, but it only works if this card is already in your graveyard. I have to think of ways this card will not be a junk rare. Right now, I can't come up with anything. 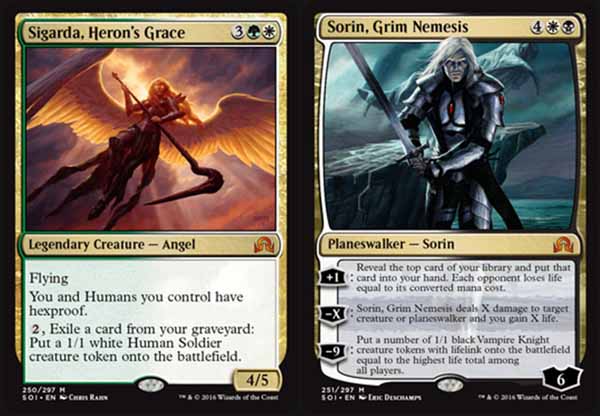 Sigarda, Heron's Grace: it doesn't have Hexproof. It reads great in Standard constructed, where you are likely to have many creatures on your side of the battlefield, and likely on your opponent's side.
Sorin, Grim Nemesis: a bit too heavy for Modern, but in Standard, it reads like a really strong planeswalker. The +1 can be devastating if the card is one of your fatty to-be reanimated targets. The -X is good in Standard because it is a creature heavy, and even planeswalker-heavy format. The ultimate can be awesome in multiplayer if you or someone else has a high life count. But a large number of 1/1 tokens can be wiped out. This is not a fantastic ultimate. 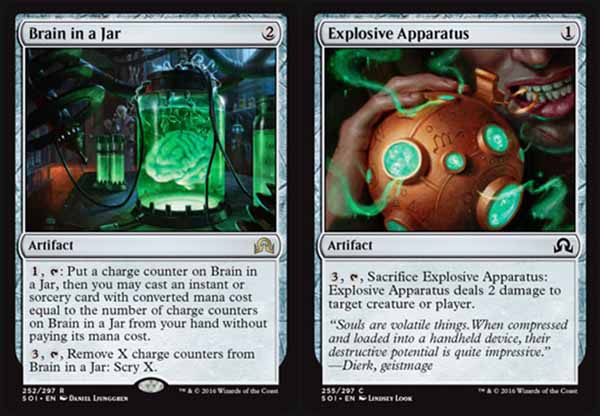 Brain in a Jar: great card. Its a low cast, the counters are well costed, and late game can be used to free cast something big.
Explosive Apparatus: and after you hit with this, you can use it to trigger Delirium. I can see it used in limited. 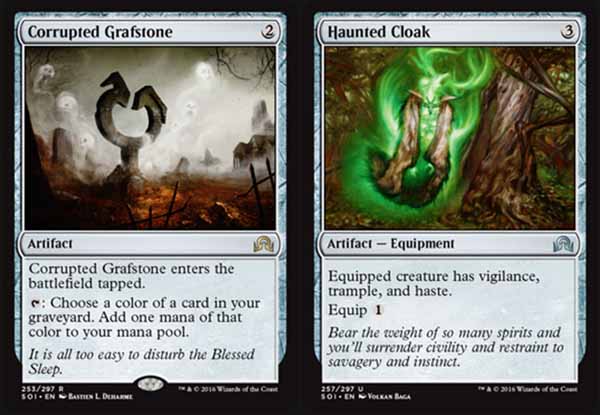 Corrupted Grafstone: with a graveyard full of cards in three colors, this is a mana rock for those colors. Reads like a junk rare.
Haunted Cloak: useful in battlecruiser Standard. I especially like the Haste part. 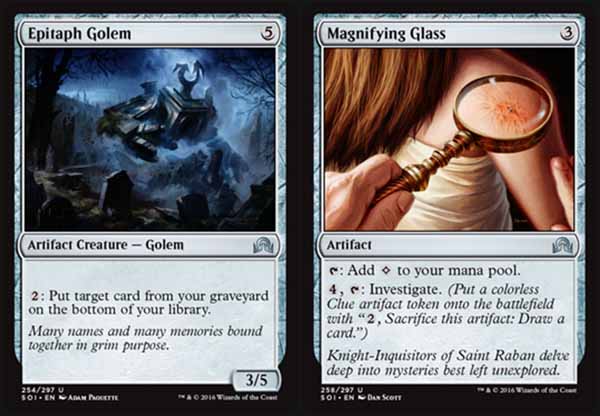 Epitaph Golem: a late game way to recover self-milled cards you no longer need to trigger Delirium. Useful if you have a way to reshuffle your graveyard after you recover the card.
Magnifying Glass: in a deck with boatloads of mana and Voltaic Key, this thing is a great draw engine. 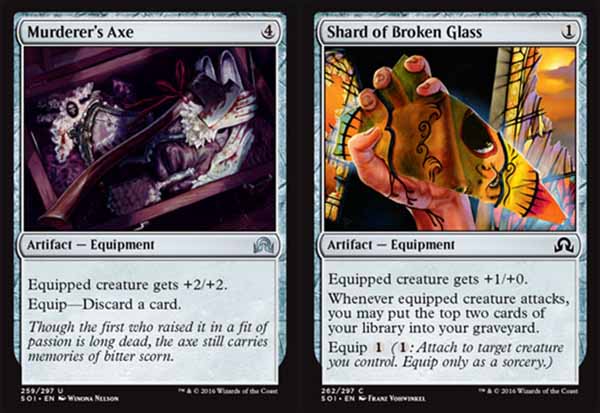 Murderer's Axe: a little heavy of a casting cast, yet the equip cost is great in a deck that benefits from discarding.
Shard of Broken Glass: limited, and self-mill in limited is dangerous. 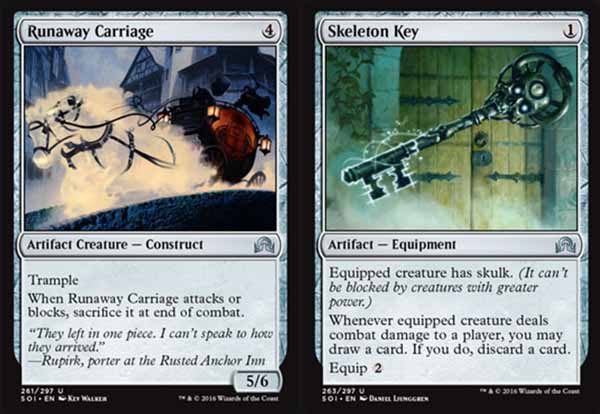 Runaway Carriage: can be used to have an artifact in the graveyard for Delirium, but it comes in really late.
Skeleton Key: very interesting. I like that the draw happens before the discard. 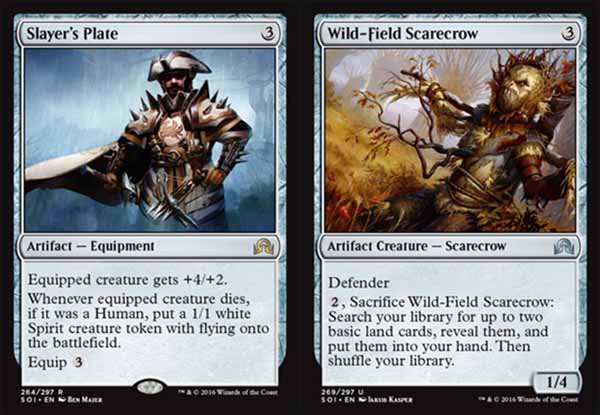 Slayer's Plate: a great card in battlecruiser Standard. Nowhere near as broken as the equipment cards that are staples in the non-rotating formats.
Wild-Field Scarecrow: a good stall until you can seed your graveyard for Delirium. Sacrifice this to get the one artifact you need to trigger Delirium. 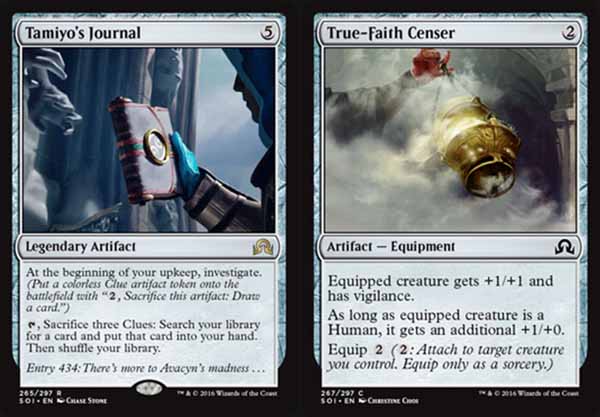 Tamiyo's Journal: great artifact, although too heavy for any format other than battlecruiser Standard. I hope there's a Tamiyo in the next set.
True-Faith Censer: limited. I will probably try it in constructed just for fun as well. 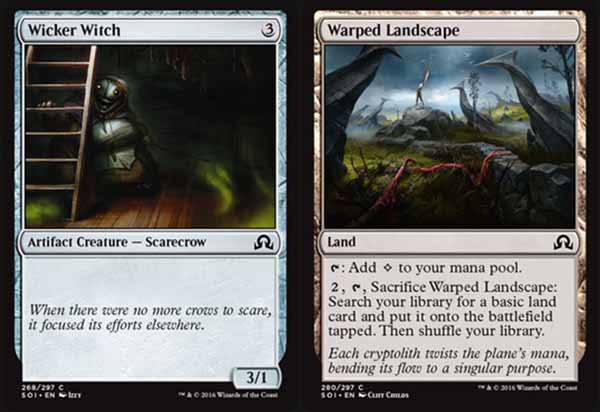 Wicker Witch: limited.
Warped Landscape: if this land has been targeted for destruction, it has good evasion. Otherwise, the sacrifice clause is there to trigger Delirium.

Link to DFCs Part 1 of 2
Posted by Rubiera