Link to Multicolored, Artifacts, and Lands

Finally, DFCs. This is a very large set! Here is the first of two batches. First off, I like that the transformation is one way. The original DFCs in Innistrad block would in some cases transform back and forth, and that gets annoying pretty quickly. I like these DFCs better because they lack that problem. In addition, most of the Innistrad DFCs were limited jank. These cards are more geared for constructed play, and that makes me giddy as a school girl. 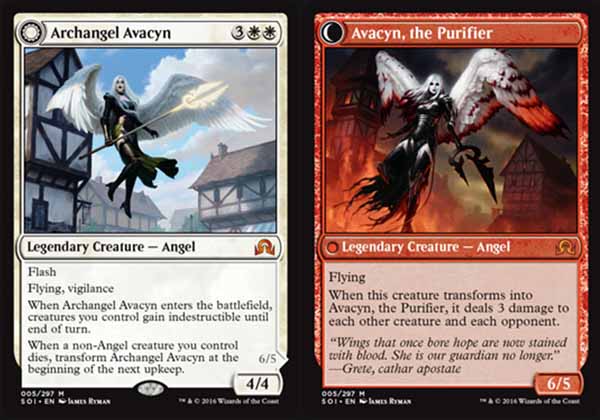 The front card is a straight-up solid Angel that will likely be a powerhouse in Standard. Every Angel must be compared to Baneslayer Angel (3 White White 5/5 Creature — Angel Flying, first strike, lifelink, protection from Demons and from Dragons), and Archangel Avacyn is not at that level. Unless you have a sacrifice outlet, you will have to wait until one of your non-Angel creatures dies to tranform this card.

The back card is even stronger and begins as an all-sided board wipe at three damage. In a deck with black creatures, and especially creatures like Blood Artist, the flip could be very costly to one of your oppokn 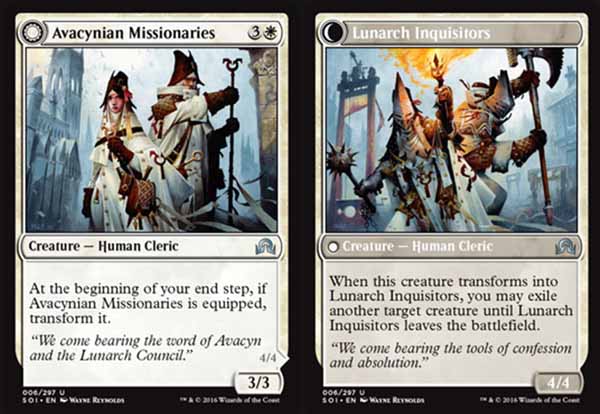 For the front card, a cheap equipment will do if all you want is to satisfy the flip condition.

The back card has a nice exile effect. Its a 'may' and that means that if your opponent does not have any creatures you can exile, the flip does nothing. 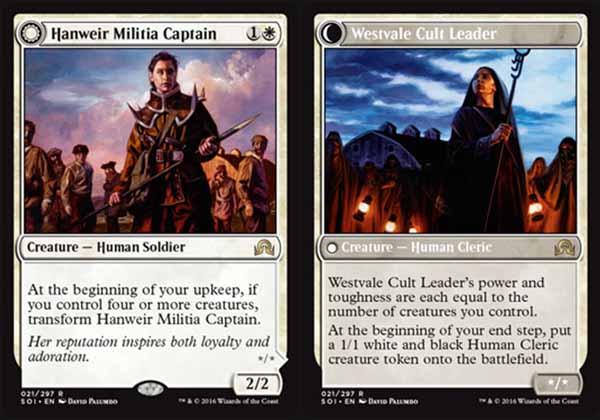 The front card is a vanilla white bear. The requirement of controlling four or more creatures is pretty steep.

The flip side generates a 1/1 token per turn and has P/T equal to the number of creatures you control. You already had to have four for the flip, and unless you lose any of them, the flip will give you at least a 4/4. 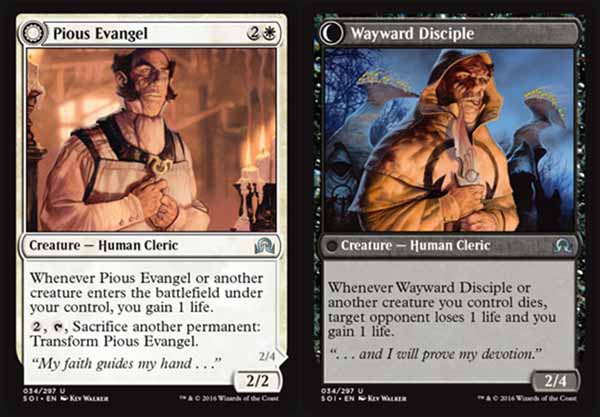 The front card has a simple transform condition: cast some other crature, pay 2, sacrifice it: done. If you keep dropping creatures before you do the flip, the 2 life is already paid for in life gain. 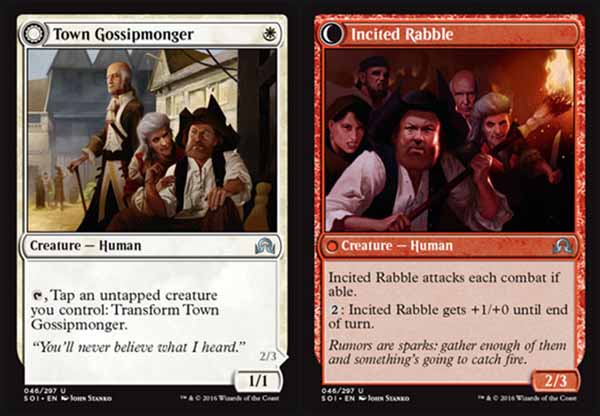 This is a really easy front card to transform. You just need another creature of yours to be untapped.

The back side is all right. It has colorless boosting, which is always good. 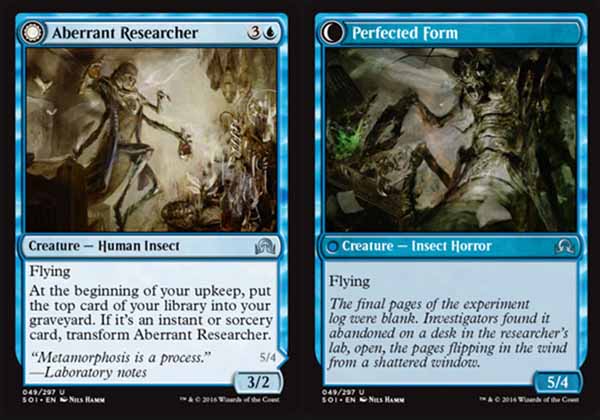 This is a fixed Delver of Secrets. Even the artwork of both sides is similar. The front side can take a while to transform but with Scry or some other library manipulation, the trigger can happen quickly.

The back side is a pretty good flyer. 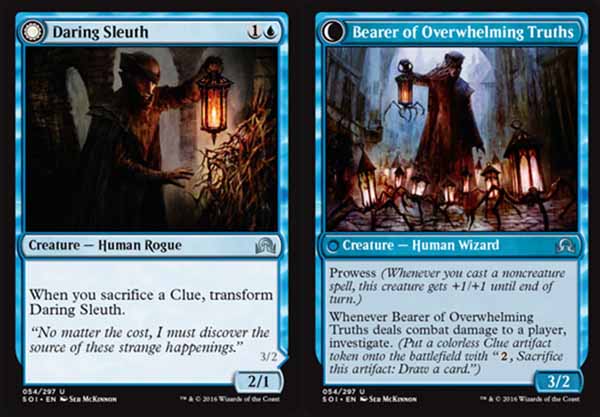 The front card is very easy to transform in a deck with lots of Investigate.

The back side has Prowess, and that is great. 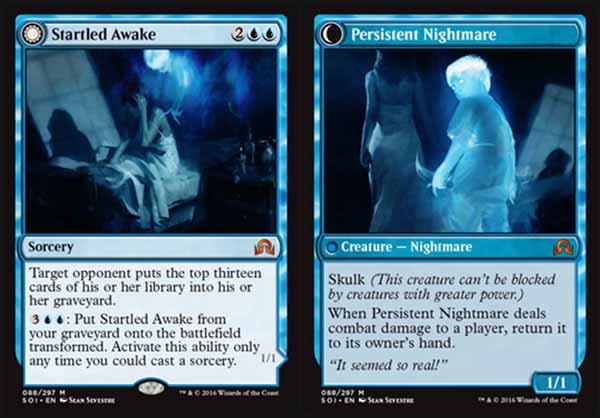 The front is a great mill. 13 cards in one bang is nothing to laugh at. In Modern, its a great way to get your mill-friendly creatures stronger. The transform happens in the graveyard. I think that's very cool. I want to know who designed this card. This is good, very good design. The transform is also easy to trigger. All you need is a sorcery, maybe even a second copy of Startled Awake (great title).

The back side is a nice ping for one. All you really want is get the card back in your hand to mill for 13 more anyways. Sweet card. One of the few mythics that is clearly a mythic all the way. 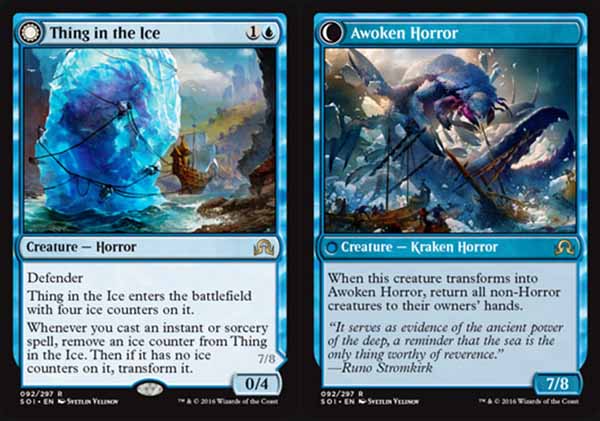 You need to cast four sorceries or instants to flip this. That's a lot in the way that controlling four creatures is a lot.

The back is a big stick all right. Time to look up horrors in Modern to make sure your creatures don't get returned with those controlled by your opponent. 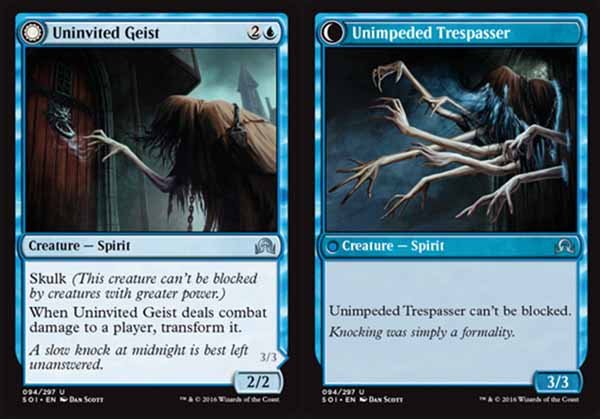 The front could be cast earlier and it would be a better card. A three drop that is able to deal direct damage... I need to think about that. Even with Skulk, you opponent would have to NOT control any 2/2s or 1/1s. I want to see it in play. Right now, it looks like a weak condition to transform.

Once transformed, though, you are in good shape hitting for three unimpeded. You can even equip it once it transforms and hit for more. 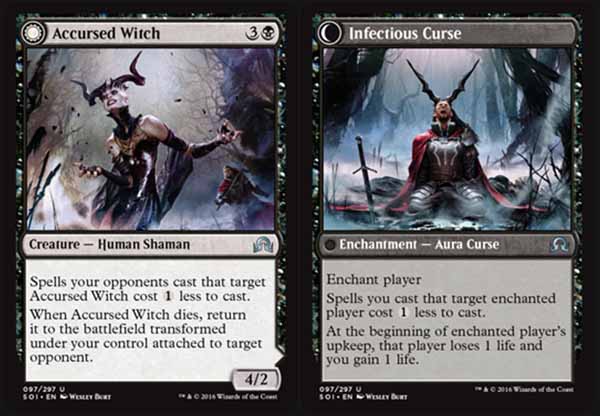 The front has reasonable protection, but cast at four you will be enough turns in that your opponent will likely have the extra mana to hit it anyways. Of course, the incentive is not to hit it because then it transforms. If your opponent abstains from hitting it, you will need a sacrifice outlet.

The back enchants an opponent to work best. Red direct damage seems like a good choice here. 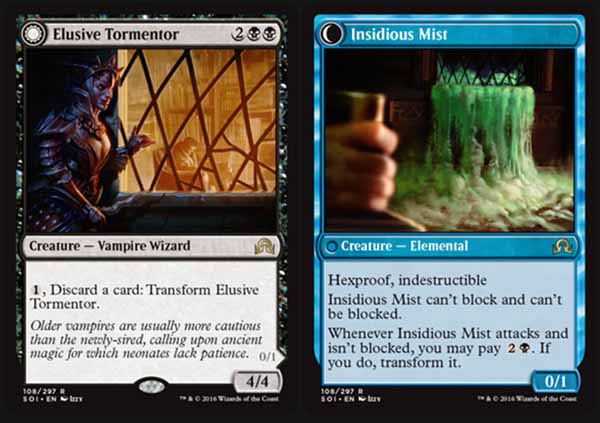 The front has a really easy transform condition. Otherwise, its a vanilla four mana 4/4.

Once transformed, you can equip it and hit with unblockable. I don't see the advantage of flipping it back again... unless your opponent tries to have you sacrifice it I guess. 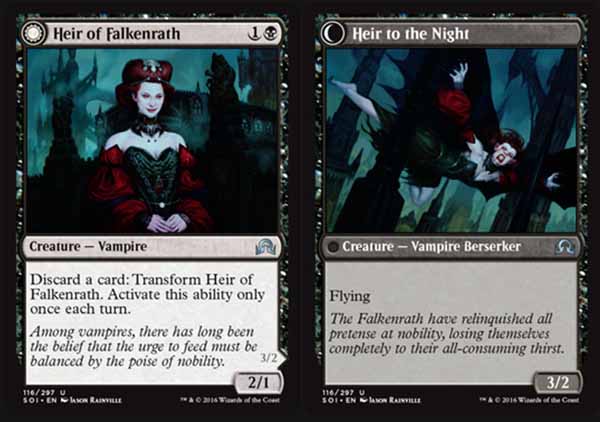 The front can be transformed easily.

The result is a 3/2 flyer. Its the same as if you had a two drop 3/2 flyer that could only be cast if you discarded a card. 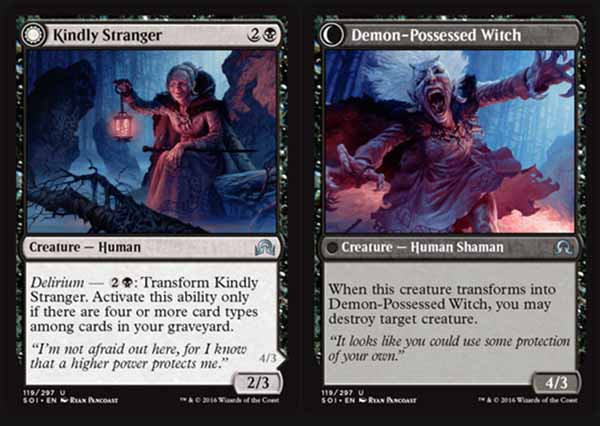 The front has a difficult transformation cost. You need Delirium and 2B in mana.

The result nets you the ability to destroy a creature and now you have a 4/3. But what you have paid to get there is the equivalent of a 6 drop 4/3 with a clause that says 'the turn after you cast this creature you may destroy target creature.'

Link to DFCs Part 2 of 2
Posted by Rubiera