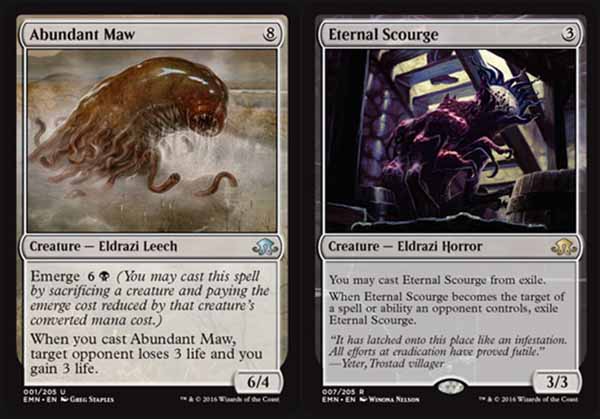 Abundant Maw: Reads like a common. I like it either way.
Eternal Scourge: Oh, very very nice. I can play it from exile. That is just plain awesome. I am adding it to my list of these. It's a very small list. I already have Misthollow Griffin on it. You don't have to wait to have your opponent trigger the exile clause. Still, it's only a vanilla creature otherwise. Nice, though. 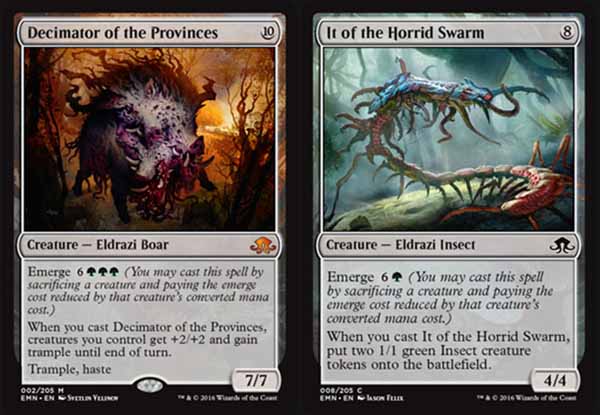 Decimator of the Provinces: Junk Mythic. It's a heavy cast vanilla creature if we ignore the one time bump clause.
It of the Horrid Swarm: Limited. 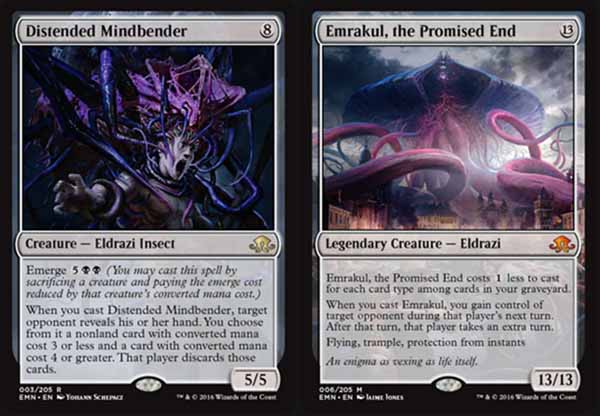 Distended Mindbender: It's a nice hand disruption play, but that late in the game, your opponent often has no cards in hand or a land in hand. It reads like a junk rare.
Emrakul, the Promised End: It is definitely very strong in Standard. I am not sure about the other formats. You can have as many as six or seven types of cards in your graveyard to reduce the casting cost. Yeah, it's definitely a card I do not want to allow my opponent to cast even if it is nowhere as near a game ending play as the originally Emrakul. 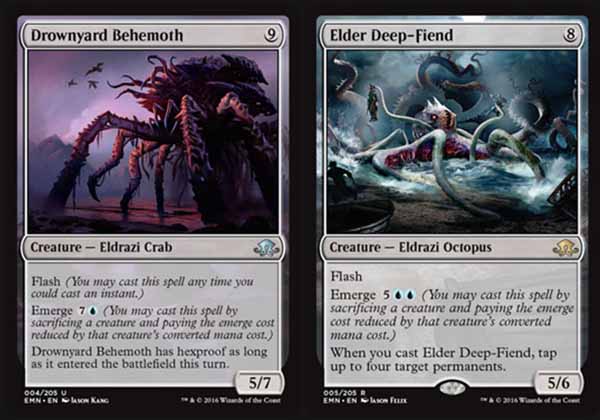 Drownyard Behemorh: I love Flash, but the least it costs is eight mana!
Elder Deep-Fiend: Reads like a junk rare. I like the tapping clause a lot, although I see no benefit in tapping anything other than creatures. If it is a plant for the next block and that block has a lot of artifacts, then this card will be a junk rare out of the gate and a really powerful rare once those artifacts come out. 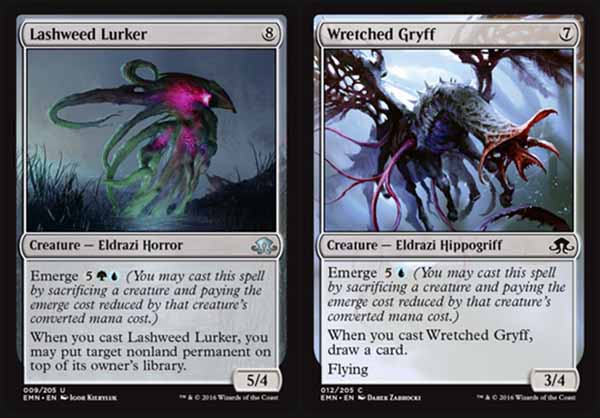 Lashweed Lurker: Nice disruption effect, yet a really heavy cast and a two-color restriction for the Emerge cost. I feel like Emerge could have been costed more aggressively, but it could be that I need to play with the mechanic to appreciate it's value better. If an Emerge card does not have Haste, I am sacrificing a card I can hit with now, for a card I can hit with later... I need to see this trade-off in action to appreciate it better.
Wretched Gryff: Limited, and I like it. It says "draw a card." I always like that clause on ANY card. 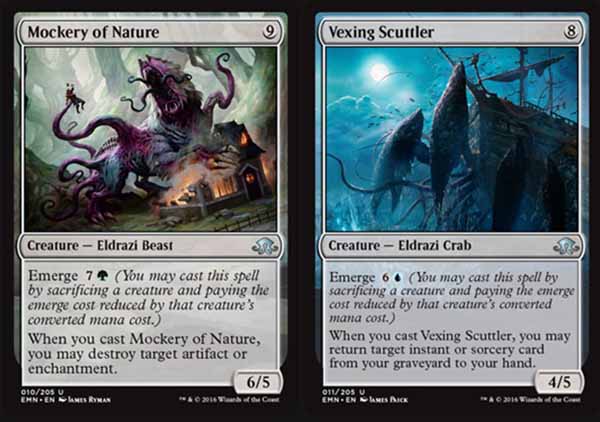 Mockery of Nature: Nice bonus, same as previous, I need to play with Emerge to understand if it is good or not. Haste on many of these cards would have made them a lot better, it seems.
Vexing Scuttler: Same as before. I have a wait-and-see attitude on all of these very heavy casting Emerge Eldrazi. They could be a ton of fun, or they could turn out to be complete flops. If the creature you are sacrificing has a 'when it dies' bonus, that helps. 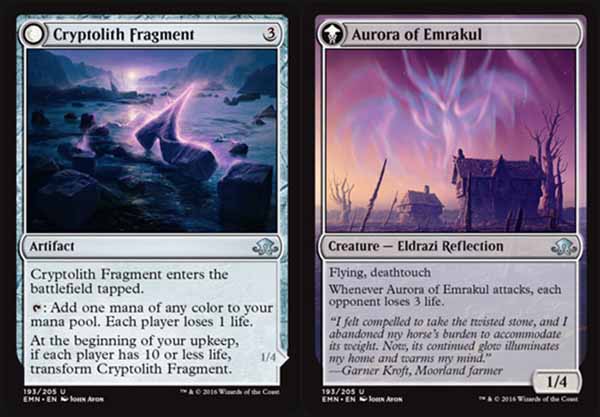 Cryptolith Fragment/Aurora of Emrakul: seems very easy to flip mid-game. Deathtouch means your opponent will be taking the hit more often than not. This is one of the better uncommons in this set, and the only DFC I want to play. 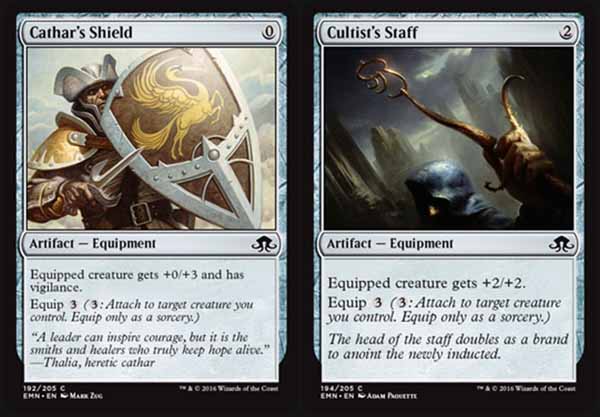 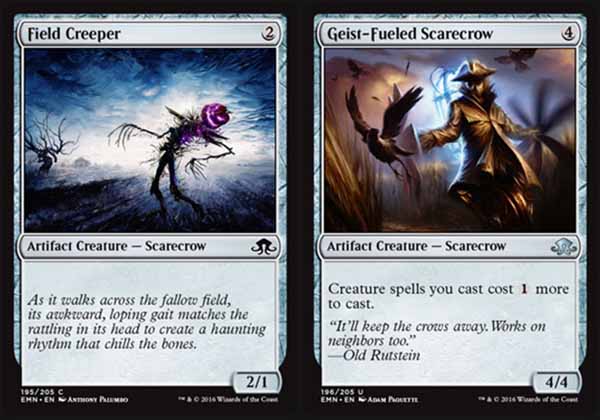 Field Creeper: Limited.
Geist-Fueled Scarecrow: A downside for a one mana discount? I am not ready to buy in. 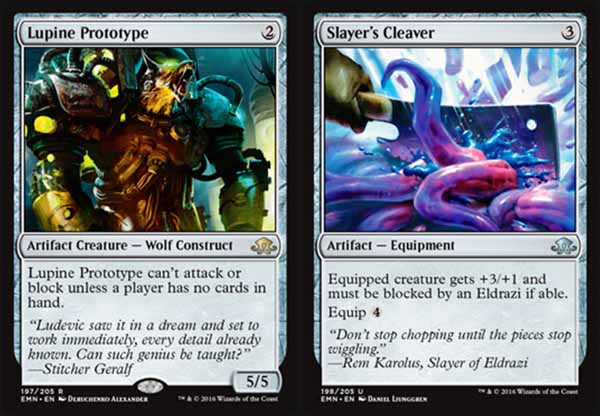 Lupine Prototype: I could have a lot of fun with this card. I just need to make sure I am able to play my entire hand as soon as possible, and/or cause my opponent to discard a lot. I like this one a lot.
Slayer's Cleaver: Block specific, pass in anything other than Standard or Block Constructed. 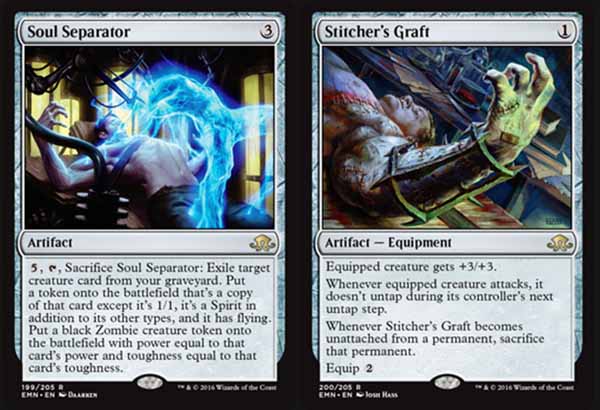 Soul Separator: I like this wall of text a lot. I am a huge fan of extremely complex junk rares like Warp World (Each player shuffles all permanents he or she owns into his or her library, then reveals that many cards from the top of his or her library. Each player puts all artifact, creature, and land cards revealed this way onto the battlefield, then does the same for enchantment cards, then puts all cards revealed this way that weren't put onto the battlefield on the bottom of his or her library.)
Stitcher's Graft: Has a couple of downsides, could be really good on the right creature. Maybe it's a plant for a creature that fits these restrictions coming out of the next block. 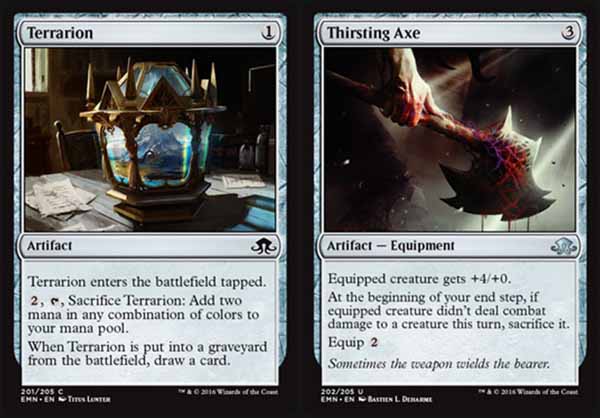 Terrarion: Nice reprint. Looks like a plant for the next block. Maybe the next block is a repeat of Shards of Alara, which had a strong artifact theme yet was a three color block.
Thirsting Axe: The downside is really restrictive and I am not sure it is worth it, unless you meant to sacrific the creature anyway.
Posted by Rubiera