White was really good. Let's see what Blue has to offer. 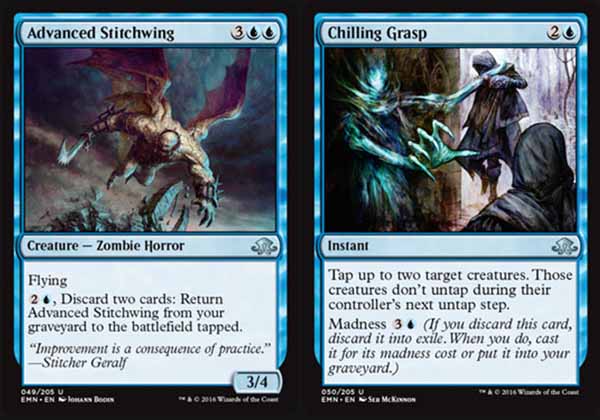 Advanced Stitchwing: Another fun addition to my Zombie deck, and also for a future Modern Dredge deck.
Chilling Grasp: Limited. Reads like a common. The Madness cost is one more mana than the normal casting cost? 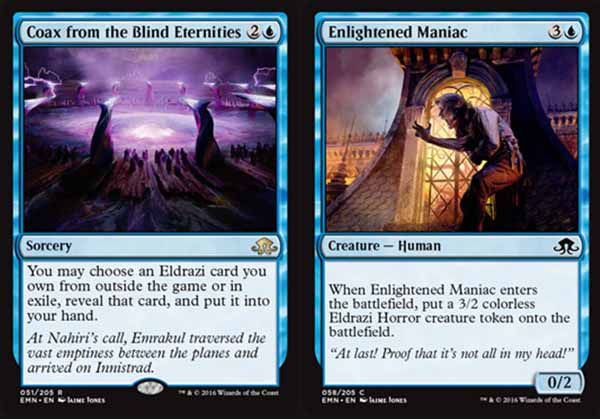 Coax from the Blind Eternities: About the only thing missing is to let you cast it for free. This is absurdly good. Outside the game can be your sideboard, like the Legacy Wishes. I want to abuse this card.
Enlightened Maniac: It's not a Zombie. That's all I care about for this set. Limited, and interesting. 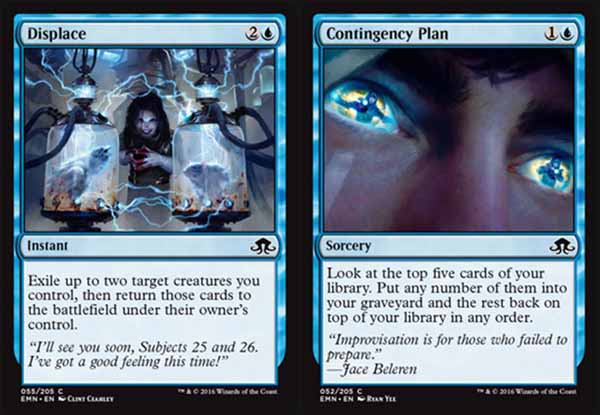 Displace: this is so awesome. Any format with a double flickerer is a fun format. Strictly worse than Ghostly Flicker from Avacyn Restored (Exile two target artifacts, creatures, and/or lands you control, then return those cards to the battlefield under your control.) but let us not forget than we are in the battlecruiser era of Magic, and that is just fine. Magic does not need the power creep of Yugioh and Pokemon. I have never used Ghostly Flicker on anything other than creatures anyways.
Contingency Plan: Awesome artwork. It's going in my Zombie deck. Nice! A functional reprint of Taigam's Scheming. That's really good. Now when I build a deck and I need four of this effect, I can split them into two of each to guard off against Pithing Needle and other card hosers. 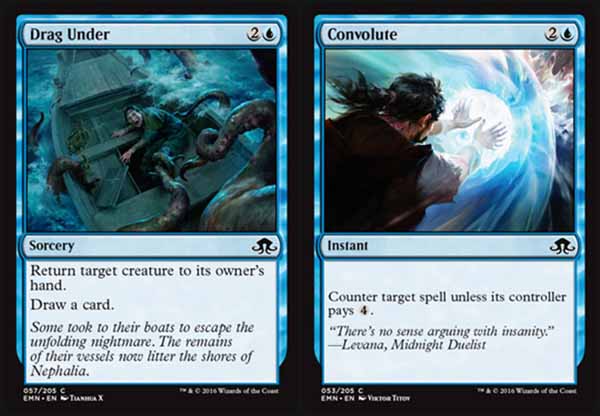 Drag Under: Limited.
Convolute: Battlecruiser Mana Leak is all right for battlecruiser. That extra mana makes all the difference between a card that can be used in all formats and this card. 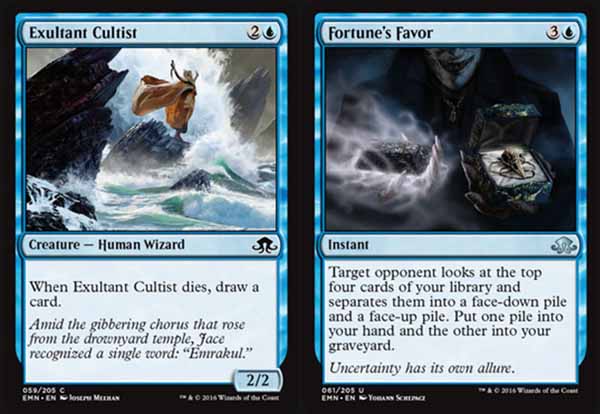 Exultant Cultist: Limited, and nice. "draw a card" is my favorite phrase on a Magic card.
Fortune's Favor: Interesting Batman's Joker type of artwork. Yet another Fact or Fiction effect (Reveal the top five cards of your library. An opponent separates those cards into two piles. Put one pile into your hand and the other into your graveyard.) Could be titled "Fact or Fiction, Battlecruiser Edition." 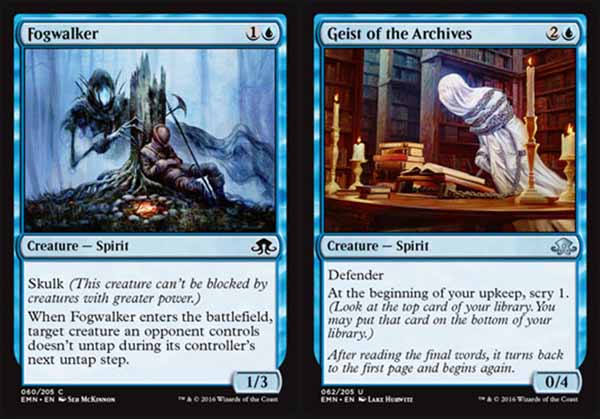 Fogwalker: Spirit No.1, Limited.
Geist of the Archives: Spirit No.2, a little heavy and it doesn't have Flying, yet Scry 1 every turn is very good. 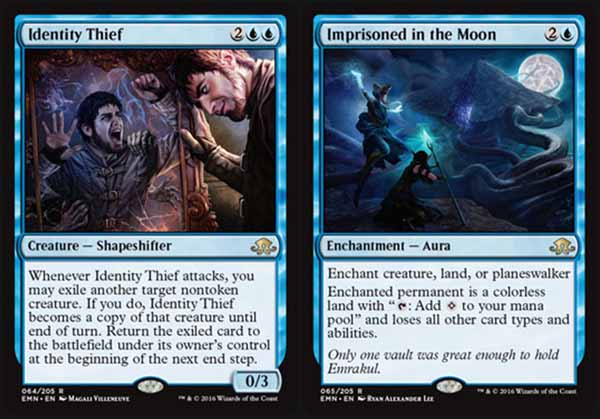 Identity Thief: It does not say "under your control." That's a very good phrase to NOT have on this card. You can use one of your creatures with a nice Enters the Battlefield (ETB) clause, or your opponent's creature.
Imprisoned In the Moon: This card oozes versatility. So far this set is oozing versatility. You can hose your opponent out of a color using the land bit, you can neutralize a creature or planeswalker. Great design. 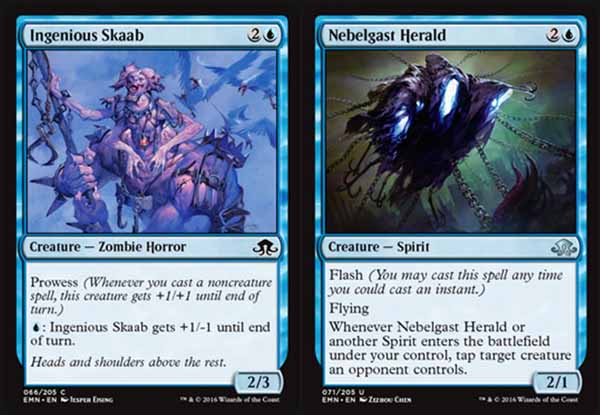 Ingenious Skaab: Limited.
Nebelgast Herald: Flash and Flying on pretty much any card is very good. Spirit No. 3. Versatile indeed. 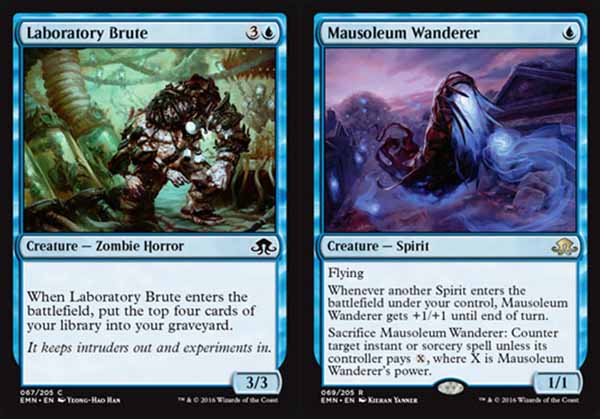 Laboratory Brute: Limited. A little late to drop those cards in the graveyard, yet a good effect.
Mausoleum Wanderer: Spirit No. 4, reads like an auto-include in Standard Spirits, and a junk rare otherwise. For the first clause, it's until end of turn. For the second clause, you need to sacrifice it. 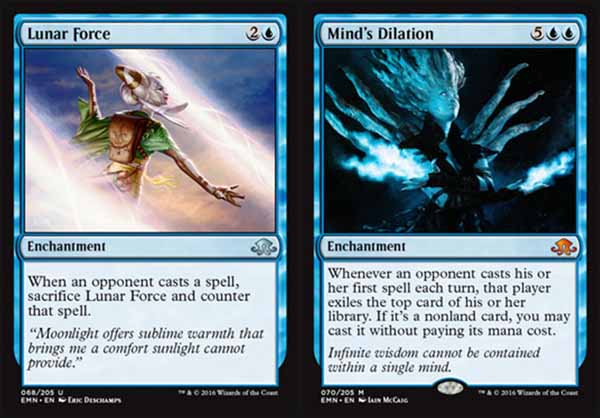 Lunar Force: Interesting. You can lose it almost as soon as you cast it, yet a counterspell is a counterspell. Of course, your opponent can pitch a lesser spell to get rid of it... I am not sold on this card.
Mind's Dilation: Because EDH only needs one. It will likely replace The Great Aurora in the quirky deck of the format and I am looking forward to that. 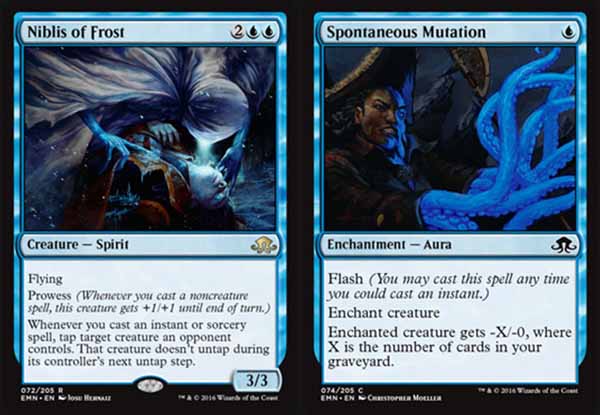 Niblis of Frost: Spirit No. 5, I want to play this with the original Tamiyo in a blue/red instant and sorceries deck.
Spontaneous Mutation: Great way to neutralize a creature in Limited, but you have to work hard to select cards that fill your graveyard, and you would corner yourself into Blue/Black. 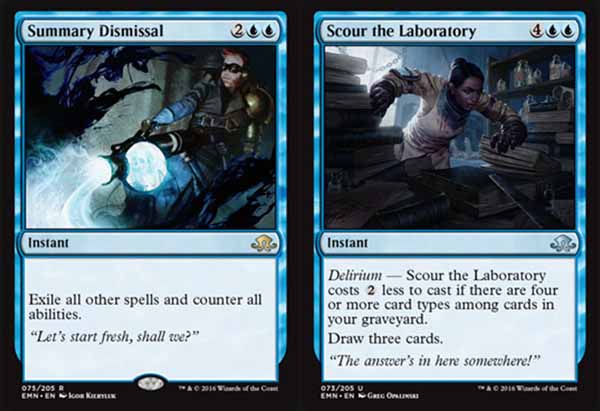 Summary Dismissal: Against some decks this is a great counterspell. It reads like it will fit only against some decks.
Scour the Laboratory: The Opportunity of this format. 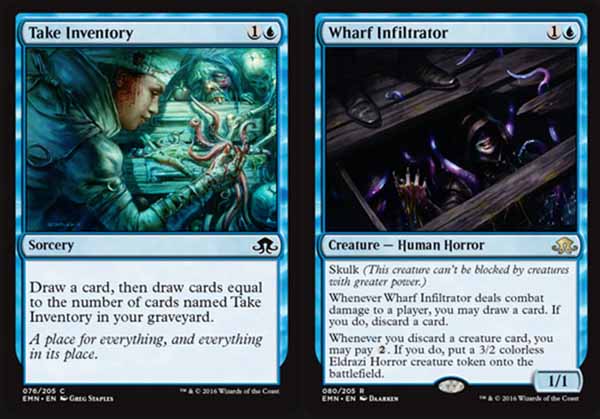 Take Inventory: functional reprint of Accumulated Knowledge, now a Sorcery instead of an Instant.
Wharf Infiltrator: Oh, I really like this one. You can discard a creature card via some other outlet, and the clause still triggers. It's not a Zombie, but we can't have everything. 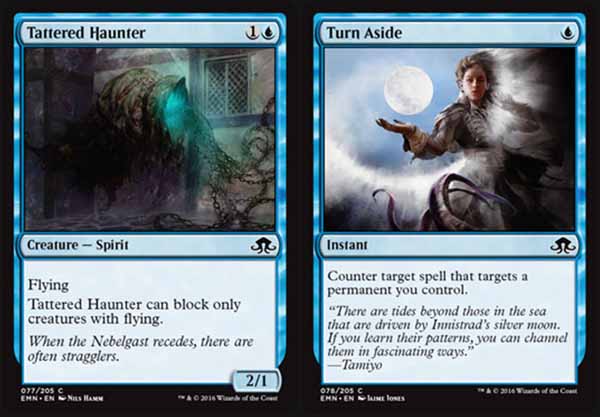 Tattered Hunter: Limited. Spirit No. 6.
Turn Aside: Limited, reprinted from Scars of Mirrodin. 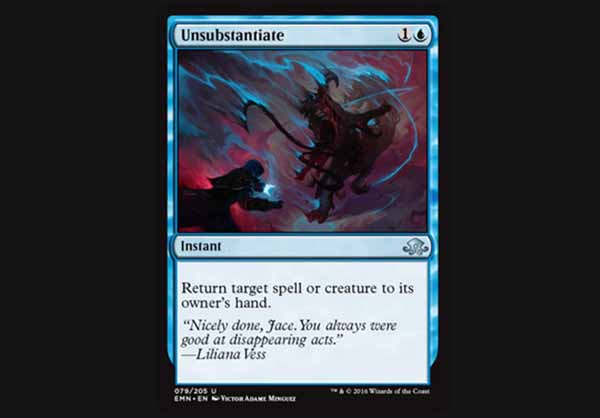 Unsubstantiate: That's a lot of t's. Should have been a common.
Posted by Rubiera