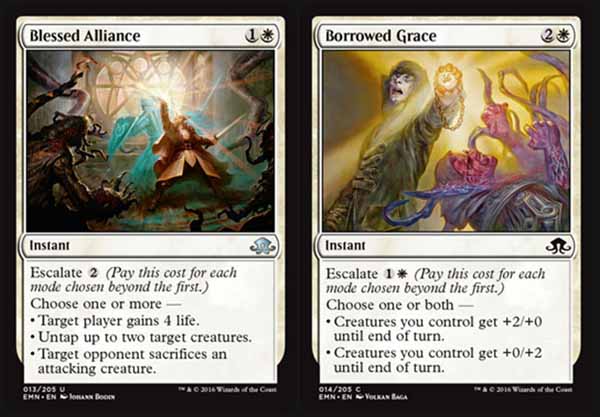 Blessed Alliance: A truly versatile card. Gaining life usually isn't great, but the other two clauses are very useful. For 6 mana late game you can do a lot with this card. Escalate, I love you.
Borrowed Grace: Escalate reminds me of Kicker. If you play this late game, it really is a 5-mana Instant that boosts +2/+2. You gain versatility, but you lose in the mana cost. Compare with Dauntless Onslaught from Theros, which gives you the full package of +2/+2 for only three mana but you can only apply it to two creatures. This card can be really good if you have, say, ten creatures. 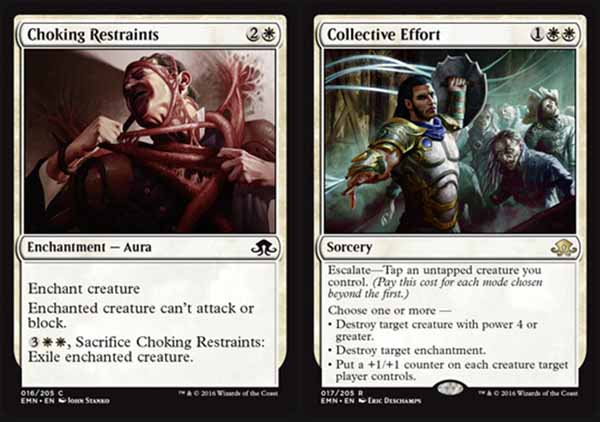 Choking Restraints: A one mana heavier Pacifism, yet a late game exile clause is very good. In a format with a lot of reanimation, I like this clause for more than just Limited.
Collective Effort: So much better than Cohort. You only need to tap ONE creature, and it can be a token. This is so versatile. 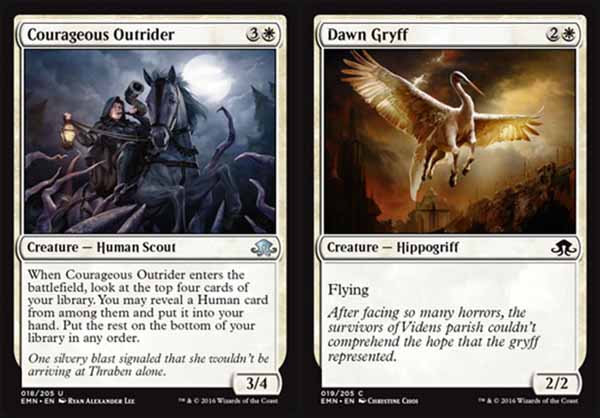 Courageous Outrider: Flicker it in Modern and you can go really deep in your deck. It's a great Scry engine. The initial investment puts it in battlecruiser range. At two or three mana, it would be busted.
Dawn Gryff: Limited. 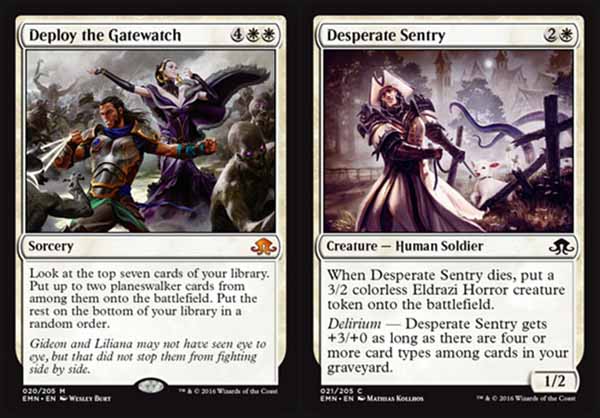 Deploy the Gatewatch: Because in EDH you only need one. Goes well with the planeswalker superfriends deck.
Desperate Sentry: I am surprised that it replaces itself with a bigger creature and only at common. Reads great. I would have read it was a 1/1 token and would have kept my description to 'Limited,' but a 3/2 token is no joke. Also, a colorless token places itself out of many removal spells that depend on a color. 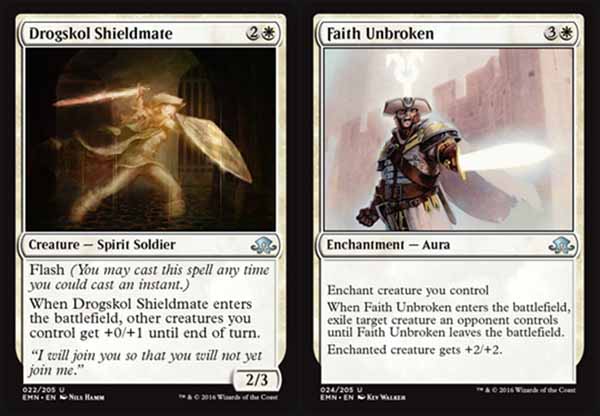 Drogskold Shieldmate: First Spirit I run into. It could be a fun deck like Minotaurs in Theros block. Flash is so useful! Still, you need to have three mana untapped to profit from Flash best.
Faith Unbroken: It has several effects, and that's great. The heavier cost is well warranted. In battlecruiser Magic, this card is full of versatility. 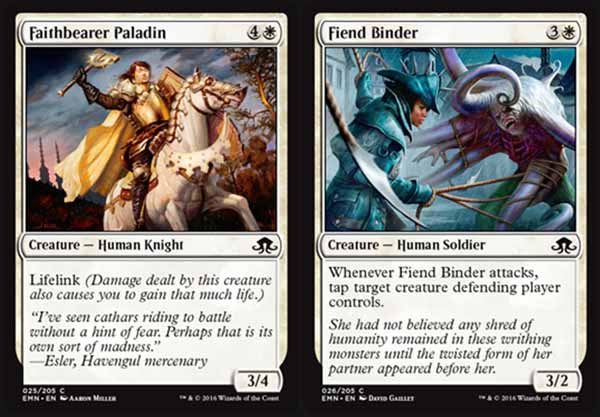 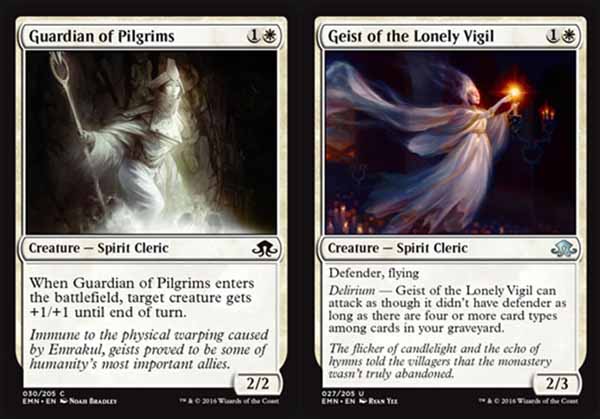 Guardian of Pilgrims: It's more than just a Spirit bear. Spirit No. 2.
Geist of the Lonely Vigil: A wall that can hit for two until you get Delirium... I am not thrilled. I have been toying with Delirium, and it's not something that can happen super early unless you flatten the card types to have fewer creatures and then have more of the other card types. It reads like a Limited card even if it's an uncommon. Spirit No. 3 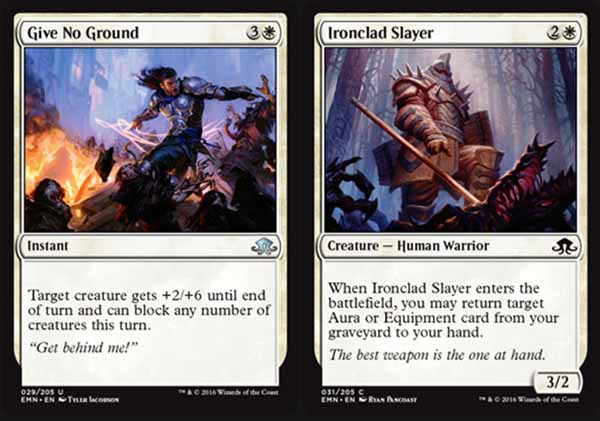 Give No Ground: That is one really cool battle trick. If the creature you are using this on has Deathtouch, that will be one beautiful battle trick.
Ironclad Slayer: That's a very useful Enter the Battlefield (ETB) clause. It reads like an uncommon! 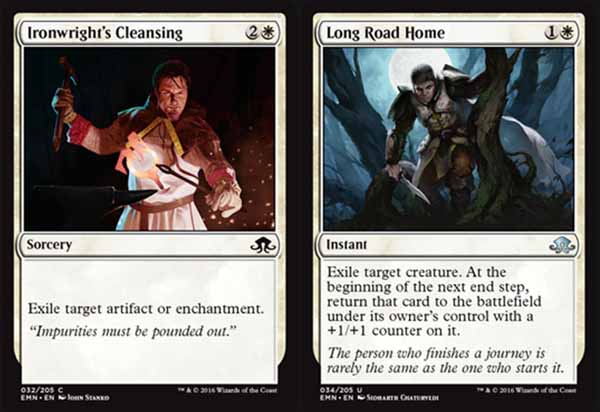 Ironwright's Cleansing: An exile clause is always very good. I like this a lot. It's worth the extra one mana over something like Disenchant (Instant, for 1W, destroy target artifact or enchantment).
Long Road Home: Awesome title... really awesome title. I would use it on one of my creatures with a great ETB clause, or I would use it on an opponent's token in a moment of desperation. Versatile... I keep using that word... am I ordering a booster box of this set? It's looking like I will. Versatile commons and uncommons make a set truly great. 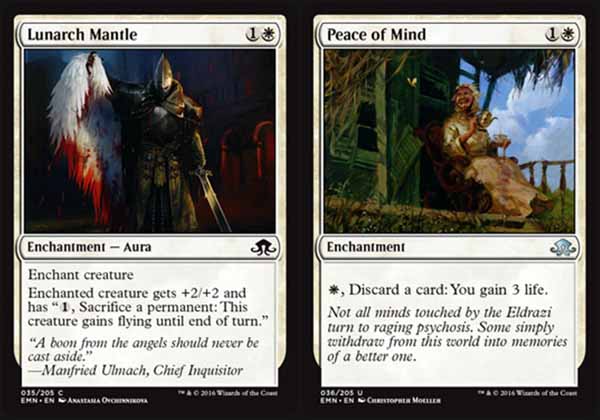 Lunarch Mantle: I am not thrilled by the clause, but the boost for two-mana, I will take that.
Peace of Mind: Nice title. Lifegain usually sucks. It would work well in a reanimation deck for the discard clause, and it's only two mana. 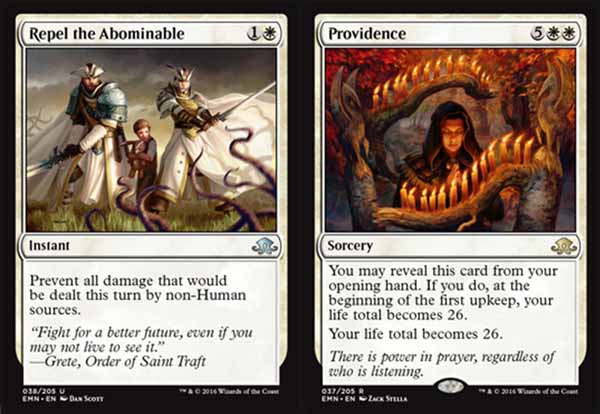 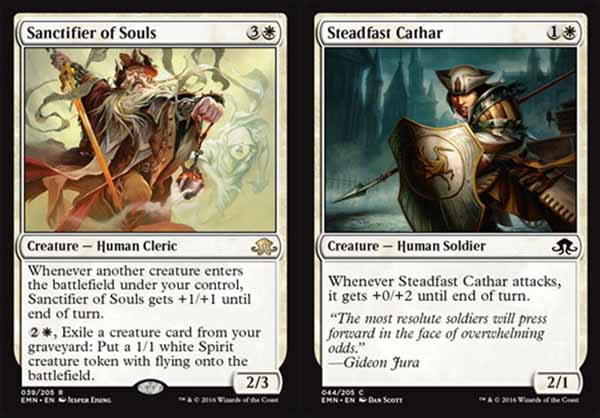 Sanctifier of Souls: Reads like a junk rare. If the +1/+1 stayed, that would be much better. And if you could exile anything in your graveyard, it would be ba-broken.
Steadfast Cathar: Nice Limited card. I am really liking this set already! 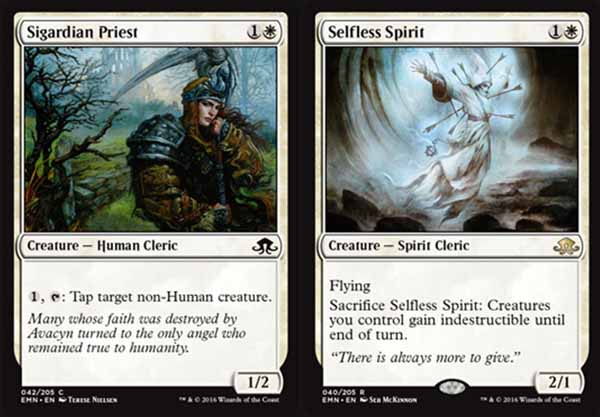 Sigardian Priest: Limited.
Selfless Spirit: Spirit No. 4. One time indestructible doesn't sound amazing. If there is an easy way to reanimate it, then I am sold. Otherwise, it's too much of a one-time trick. 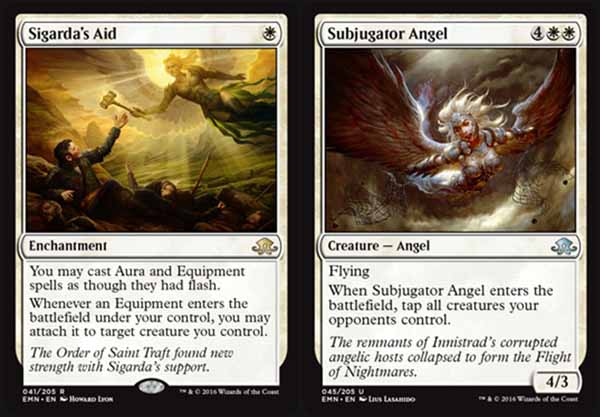 Sigarda's Aid: What? Did I just read this card and it is one mana? This is absurd. The abuse you can score with this card in all formats is sooo over the top. You are not paying the equip cost. This is awesome! I am thinking Vintage, even.
Subjugator Angel: It doesn't have Flash or Haste. It needs to combo with something that gives it Haste, and then it's a free hit for four... It's all right. 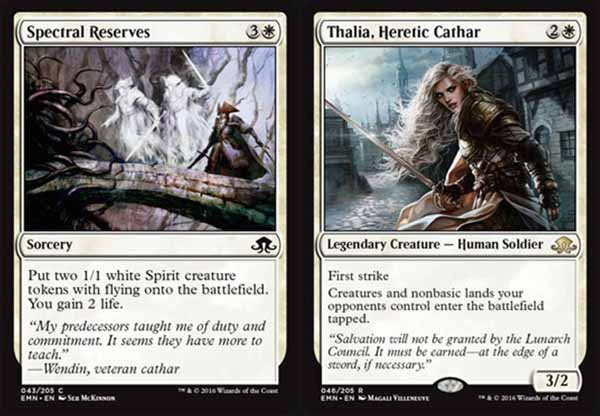 Spectral Reserves: Limited. and they can be Spirits No. 5 in the Spirits deck.
Thalia, Heretic Cathar: One more mana than the original Thalia, yet it has a really good ability. I really wish this card was NOT Thalia, so I could play it with 2 mana Thalia. 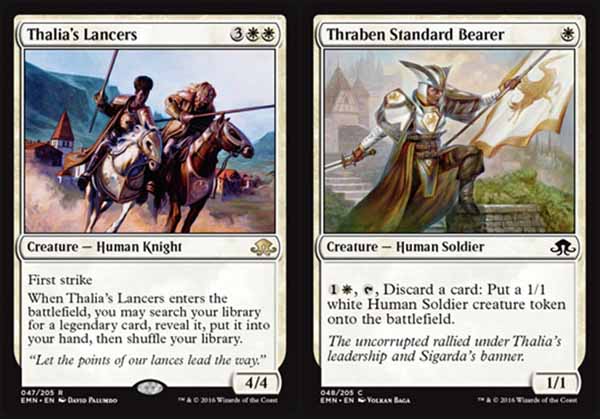 Thalia's Lancers: Nice Thalia tutor in Standard constructed. As a five drop in Modern it will be a juk rare.
Thraben Standard Bearer: Limited.