Why the Core Set needs to come back

In some form, the Core Set needs to come back. When we had the yearly Core Set, the games' staples could be found in one set, and the cards in it were simple to play, therefore a great entry point for new players. The expansions that were issued when the Core Set was around were more complex sets than what we have now, and that worked well. You knew you could get into deckbuilding with the complex cards, and then add Core Set staples to taste. We want a fun simple set that always has cheap packs. At times during the year when we want to crack cheap packs, we buy a dozen Core Set packs and crack a bunch of staples. We also want complex expansions that get us thinking in new ways.

What do we have now? We have expansions that are 3/4 like the old expansions and 1/4 of a Core Set. We don't get what we want. We don't get the cheap Core Set packs full of staples, and we don't get sets full of interesting complexity. It doesn't work. By forcing 1/2 of a Core Set into a two set block, Wizards is forced to design each block as if was the only set of cards ever issued. It's great for Cube, and even better for Limited. The new blocks are awesome to build cubes with and have fantastically well-tuned Limited environments. But Magic is popular in many other quarters. In the quarter I am from, we want sets that are simple (Core Sets) and sets that are complex (the expansions). We don't want sets that have some simple parts and some complex parts. The less complex sets we get now have fewer abilities, and fewer avenues for intricate deck building. We also don't want sets that live in their own planets. Now when I build decks, I select the block and build a deck. In the process of tuning I will add a card or two from one of the other blocks, and I am done. In the Core Set era, I would build a deck that was one third from a block, one third from the other block, and one third from the core set. Those times are gone, and I miss them. So Wizards, how about bringing back the Core Set?

How can Wizards bring back the Core Set? How about taking a page from the Yugioh play book. In addition to the four complex expansions, Wizards can issue 1/2 a Core Set twice a year, with each of the halves geared towards one of the two-set blocks. Wizards could issue 1/2 a Core Set in July, when all the kids are out of school, and the other 1/2 of a Core Set in December, when all the kids have holiday money (be it Christmas or any other religious holiday, or just end-of-year gift money). Do it, Wizards! (Oh, and start having the fun mechanics from the first set in the second set-Investigate is an example).

From the responses I got in Reddit, it seems like most Magic players are OK with the Core Set being gone. This is not a sad, sad thing, but it does feel like a loss. I guess I will have to adapt to the new deck building, which is almost completely within a specific block, and to the new sets with a small number of abilities, and the small loss of deck building depth now that all Magic sets aim for the same compromise in complexity for the sake of including part of a Core Set in every set.

March 18, 2017 update. I have thought some more about the current Standard, and this time I will steer clear of Reddit. There are many people in that forum who post only to be argumentative and don't seem to be interested in a discussion. Another way of stating it is to state that Reddit has a really high troll factor. Let's compare the 8 set Standards with and without Core Sets:

With Core Sets, we had:

Without the Core Set we have:

There is a way to supplement and fix this mega block constructed format. One way is:

But that's too many mini Core Sets.

Here is another setup:

There is a third setup, and that is to make the small sets in every two-set block large sets. That's probably the easiest solution while sticking with the two-set block paradigm.

"While I think we hit a pretty good stride with the way that we pushed strategies and decks in three-set-block world, the switch to two-set blocks and the removal of the core set really hurt our ability to make all of that work properly, and I think we underestimated some of the severity of those changes."

I would like to restate it this way: "Oops, I guess we need to figure out a way to bring back what the Core Set added to Standard, and now we don't have a slot in our schedule to release a new Core Set. The players who read our content and are into the flavor are still with us, and everyone else is sitting on the sidelines waiting for Naturalize to be in Standard agan."

June 16 (2017) Update: The core set is coming back next Summer (2018) by popular demand. That's great! Wizards went for the 'make all sets large,' which is awesome too. They will also try to do one better by having malleable blocks of one, two, or three large sets. I could go for a Ravnica-theme block with three large sets anytime! 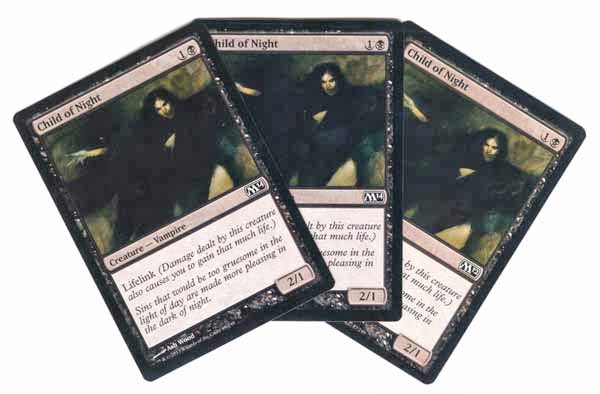