I began playing Magic when Dark Ascension was the last issued set. My first pre-release was RTR. I guess I could name this cube the Nostalgia Cube, but that is too narrow a title. The RTR+ Cube sounds boring. Maybe the New Era Cube? Yeah, that's what it is about: a new era of popularity for Magic that began with RTR.

I was thinking about this cube very early this morning on my way to work, and I know it can be a lot of fun. I know the range of sets from which to pull from: from Return to Ravnica to date. RTR was issued October 5, 2012, and it heralded a new era for Magic the Gathering. RTR+ brought in many new players to the game. Today, almost five years later, we can still find booster boxes for RTR at a price similar to that of a newly issued set. The RTR+ range has cheap packs, and I am all for that. The exception is Khans of Tarkir, on account of the fetchlands, but I have already hedged against this issue by buying a booster box of KTK a few months ago.

I already have most of the cards I would want in this cube, but I love cracking packs too much to make it that unchallenging. It is way more fun, and more challenging, for me to build the cube mostly with new packs, with packs I currently do not own. I think I just heard my wallet utter a deep, painful groan.

First, let me lay down a few ground rules:

But that's only 360 cards, and we are talking about cheap packs. How about several sub-cubes? The fourth rule of the New Era Cube: the cube is composed of multiple sub-cubes.

1. The best 360 cards. There are 24 packs of 15 cards each in this sub-cube. As many as four people can play it as a sealed event, and as many as eight people can draft it. This number of cards is the equivalent of ten constructed decks. I plan to aim for one deck in each Ravnica guild made up with this selection to make sure the card pool is playable, and then I can reshuffle all ten decks in to the packs.
2. Another singleton sub-cube with the next best cards since RTR. The cards that get replaced out of the best 360 cards go here. Size? I don't know yet, but definitely more than 360. This sub-cube can be better balanced for drafting. This cube is arranged in packs of 15 cards each. It can be drafted or played sealed.
3. A sub-cube of constructed decks, aim for two tiers of ten decks each. Tier 1 of ten decks for the most powerful decks possible. Tier 1 here is not ten tournament decks, just the best decks I can build from my current card selection and cheap packs I crack. I don't know how many tiers I will have, and I hope I have at least two (that's twenty decks). I could have a tier just for intro pack decks since these are cheap.
4. A sub-cube with all of the leftover cards. For this sub-cube, I am planning to play these cards in their own format, what I call the Minus Two format, in which every cost gets decreased by two mana-casting, mana abilities; and only cards with 1 or more mana in any cost, after this subtraction, can be in this sub-cube.

There will be cards left over after I have placed all cards in the sub-cubes that they fit in. Those cards will not be in this cube.

It's great that many sets have been issued since RTR:

First pass at the BFZ and SOI blocks selection:
http://mtgadventures.blogspot.com/2017/05/the-new-era-cube-battle-for-zendikar.html

That's 12 large sets, and 8 small sets. Because large sets count twice, that's the equivalent of 32 small sets, and at 11.25 cards share for a small set, we can make it 10 cards from small sets, and 20 cards from a large set, on average, to have good representation from all of these sets. I am rounding down because additional sets will be added to the cube as they are issued. With the lower number (10 or 20), we are starting off with 320 cards I should be selecting.

I have begun with some early work: a quick look at the cards I have selected and ideas of how to group these cards for play.
http://mtgadventures.blogspot.com/2017/05/the-new-era-cube-early-work.html 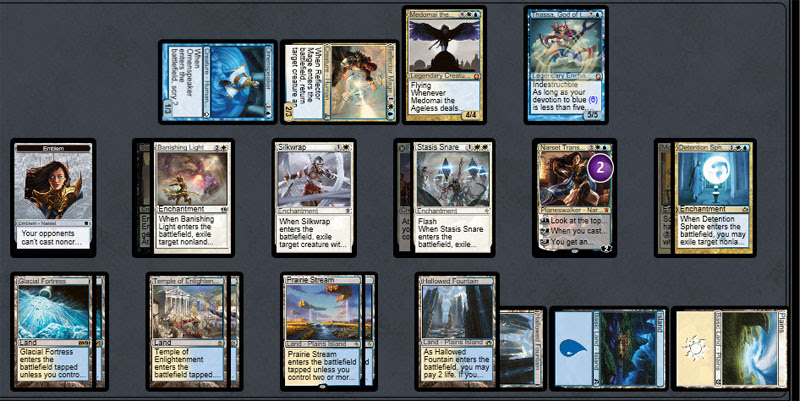