Khans, Fetchlands, and the new Standard

Here I post links to all of my recent comments beginning with the most recent.

{first paragraph} Now that the Fetchlands are in the Khans of Tarkir (KTK) block we know that KTK will be a "money" block like Zendikar: you can open packs for specific cards that are worth a lot of money and not care much for the rest of the set, and you can buy sealed product and set it aside hoping to sell it at a much higher value 5 to 6 years down the road.

{first paragraph} [one year ago] I was disappointed then that all we got were the scry lands. Now that I have played the five enemy color scry lands a ton (the ones in Theros) I can say that my attitude has changed from slightly negative to surprisingly positive (not that anyone should care, its my opinion, though). Scrying can be very useful and sometimes offsets that the land enters tapped.

The Underpowered Era, or how I miss Scars of Mirrodin/Innistrad Standard, or Welcome, Molasses Standard

{first paragraph} The announcement of the Onslaught Fetchlands now in Modern and Standard is bigger news for Modern than it is for Standard. This means that the sets in Khans of Tarkir block containing Fetchlands might as well have blank cards in the booster packs other than the Fetchlands and they will still be a huge sales success.

{first paragraph} The big news today from Wizards is the change of the rotation cycle to eliminate the core set after M16 and to have two sets per block. Here is how it will play out until the second quarter of calendar year (CY) 2017.

Why the fetchlands can not be reprinted in a Standard set

{first paragraph} This is baseless speculation (and I was soooo wrong!) 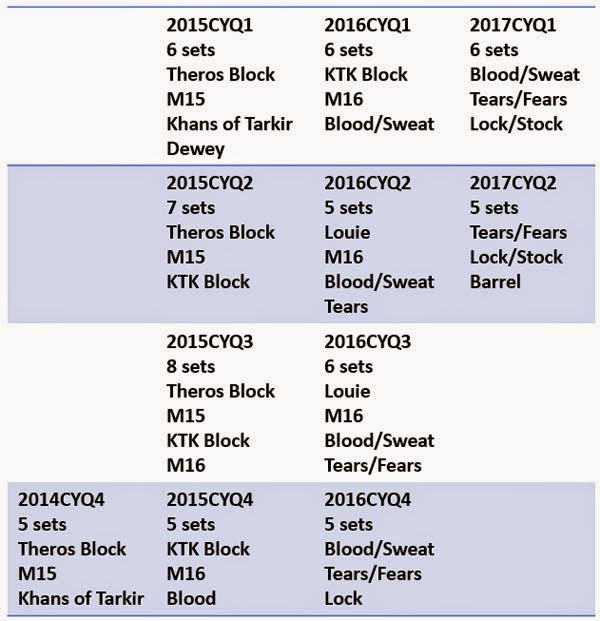