Origins Set Review: Other Rares and Mythics (White and Blue) 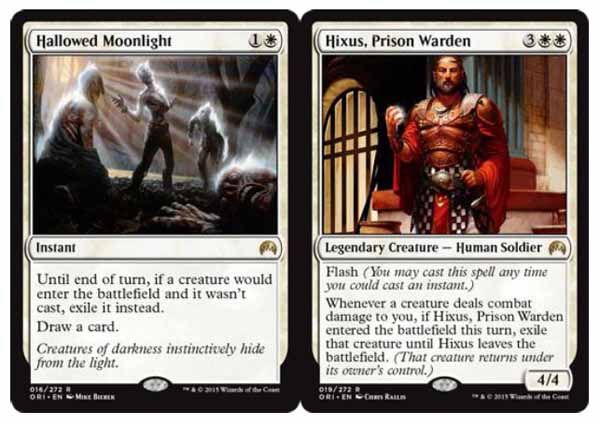 Hallowed Moonlight: Reanimator hate. It is a two-drop. I can see it get played in Modern.

Hixus, Prison Warden: the exile effect only works one turn, it is Legendary, and it is a 5-drop. OK, it has Flash. It reads junk rare elsewhere, and interesting build in Standard constructed. 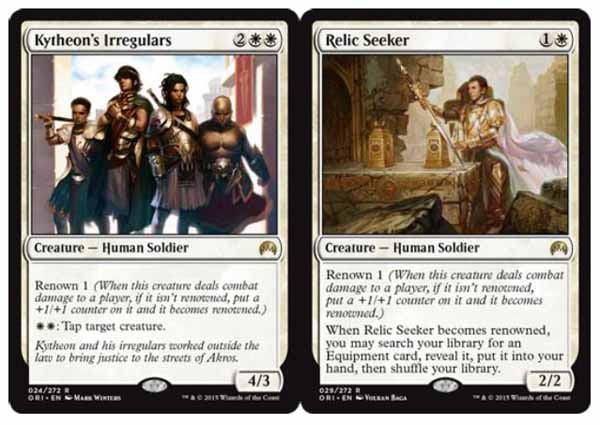 Kytheon's Irregulars: a four-drop 5/4 after it deals combat damage to your opponent, and it taps a critter. That can be useful.

Relic Seeker: The equipment ability is similar to Steelshaper's Gift from Fifth Dawn. Its a shame you only get this bonus once. If it is possible to remove the counter and get the Renown trigger to kick in repeatedly, this card could make a really cool combo. 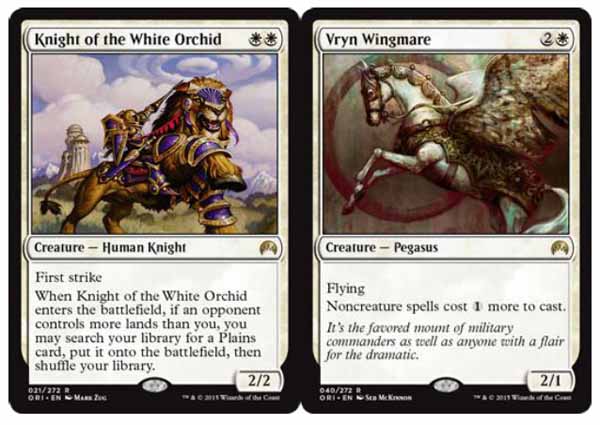 Knight of the White Orchid: the extra Plains is a good ability but you have to be behind for it to kick in. Nice in a pinch, otherwise you still get a First Strike weenie that favors mono-white at even costing (2/2 for 2).

Vryn Wingmare: Nice ability on this one, the same one as on Thalia and this one is not Legendary. Very nice! I would love to have more than one of these on the battlefield with a Thalia in Modern. 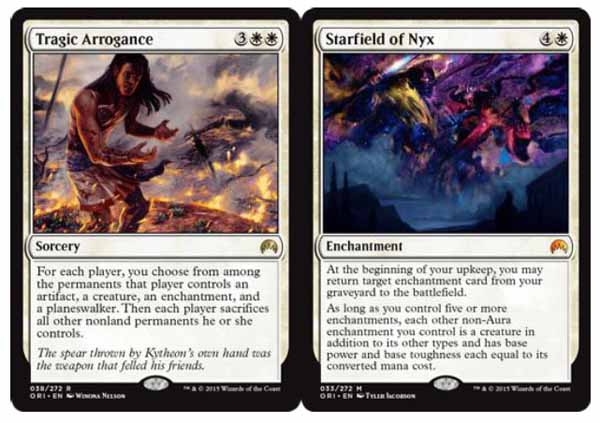 Tragic Arrogance: this is a really fun card, because before you play it you can make sure you have the correct cards and your opponent may not. If you are really behind this card can slim your opponent's board quite a bit, and if you are doing OK, this card can give you the edge to win the game. As a 5-drop, it is meant for Standard. I want to play it!

Starfield of Nyx: definitely reads like the Mythic Rare that it is. As a 4-drop, I want to play this card in a Bant build, use blue to drop a bunch of cards into my graveyard (Taigam's Scheming), accelerate it with green, and if I drop it turn 3, I can have a fun game. It definitely requires a lot of setting up. Reads like a ton of fun. 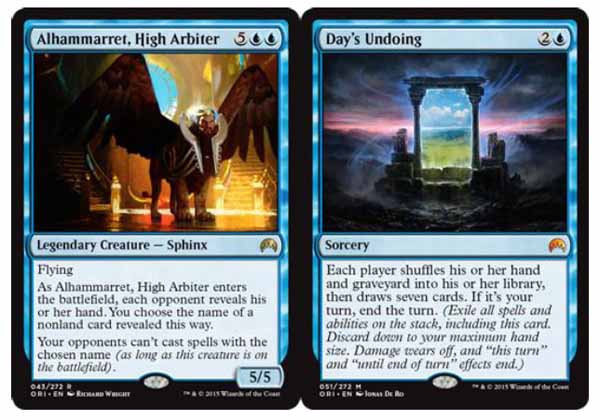 Alhammarret, High Arbiter: multiplayer fun for sure. Reads like a Commander card. A seven drop that does not win the game is a non-starter for all constructed formats.

Day's Undoing: I love the way Wizards designs remakes of the Power 9. Here is the text from Timetwister:
"Each player shuffles his or her hand and graveyard into his or her library, then draws seven cards. (Then put Timetwister into its owner's graveyard.)"
And we can play this card in Standard with the remake of Ancestral Recall (Treasure Cruise) and the remake of Time Walk (Temporal Trespass). Awesome! 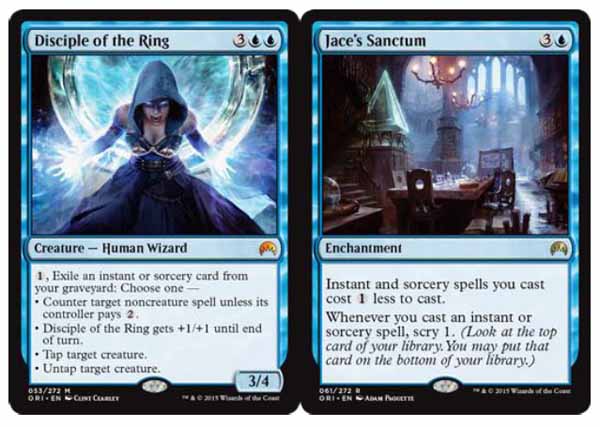 Disciple of the Ring: reads like a junk Mythic Rare. As a five-drop it will not help the flip planeswalkers that need untapping. Well, at five mana there is a long list of actions this card will not help you with... and very few in which it will. This card reminds me of Beguiler of Wills. Both cards have interesting abilities that read Mythic, but there is just too much waiting to drop the card on the battlefield and the effect is not an euphemism for 'you win the game.'

Jace's Sanctum: if this thing was a two-drop, it would be awesome in Legacy and Modern. At 4, it will be really useful in Standard. In Modern, casting a four-drop enchantment that speeds you up is good, but by that time a lot has already happened. In mono-blue with a ton of counterspells this card could work well. 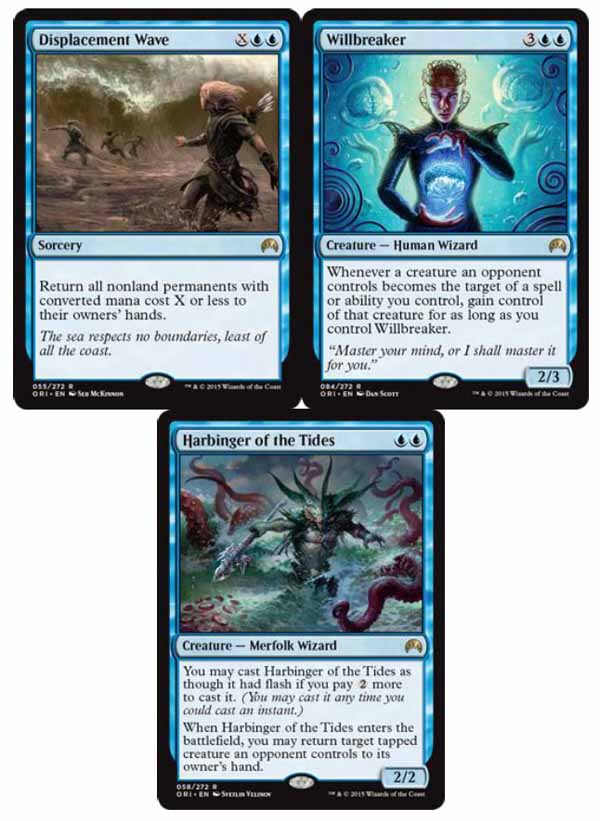 Displacement Wave: the X restriction on what gets returned is limiting. This is why Cyclonic Rift with Overload at 7 is way better: it returns everything. Still, good card in Standard constructed.

Willbreaker: reads like a fun Commander card. Playing this card in Standard happens late in the game.

Harbinger of the Tides: an interesting Merfolk. Only there isn't a Merfolk deck in Standard, unless we get one out of the next block and it may well be that this card is for a later deck. If it isn't, that's a shame, because I would love to play Merfolk in Standard. 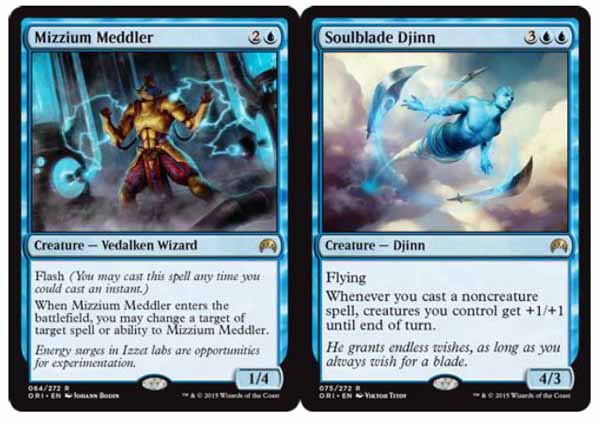 Mizzium Meddler: reads like Spellskite, which is great. Spellskite is a two-drop, and that means this card is meant more for Standard. Now if you can make it indestructible, you are able to invalidate target destruction for one of your other creatures.