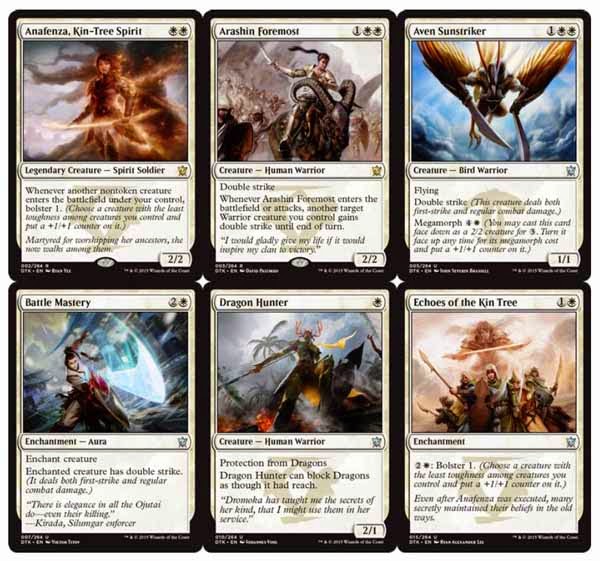 Anafenza, Kin-Tree Spirit: Counters to incoming critters is great, play with Hardened Scales in White/Green.
Arashin Foremost: 3-drop in Warrior tribal that gives double strike to one of your other warriors. It will work better with target removal to clear the field in White/Black.
Aven Sunstriker: Uncommon version of Arashin Foremost. Weak body at 1/1 and sky-high Megamorph cost. I will skip this one.
Battle Mastery: Auto-include in a White/Red deck with lots of double strike and its red cousin from Fate Reforged, Temur Battle Rage.
Dragon Hunter: With a deathtouch enchantment in White/Black (and IS a warrior) it will do wonder in a Standard format full of Dragons.
Echoes of the Kin Tree: In a White Devotion or White/Green deck with lots of mana and with Hardened Scales it can put lots of counters on your critters. 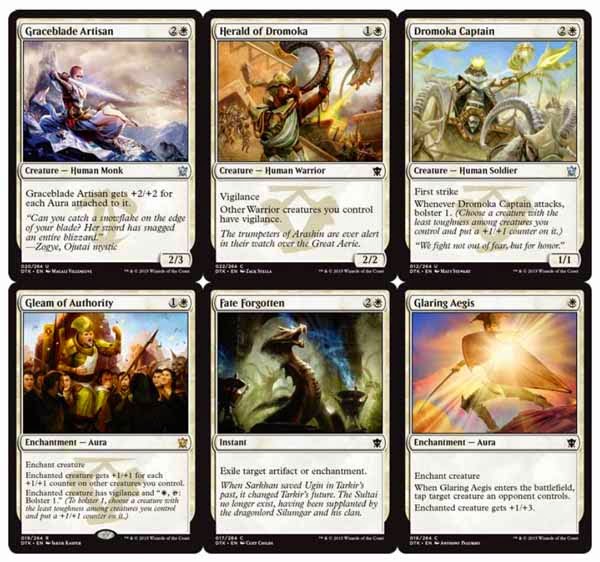 Graceblade Artisan: Pair in Modern with Ethereal Armor (RTR). Also in Modern, and in White/Green, give it Hexproof with Alpha Authority (Gatecrash). This card could be a lot of fun. It is worth a recap after I have gone through all the new Auras.
Herald of Dromoka: 2-drop Warrior Vigilance lord.
Dromoka Captain: White Weenies dude, skip.
Gleam of Authority: Great aura for Graceblade Artisan in a White/Green shell with Hardened Scales and Echoes of the Kin Tree.
Fate Forgotten: Handy exiler and great Theros hoser.
Glaring Aegis: Good butt in Modern as a 1-drop and can be much more than a limited battle trick. 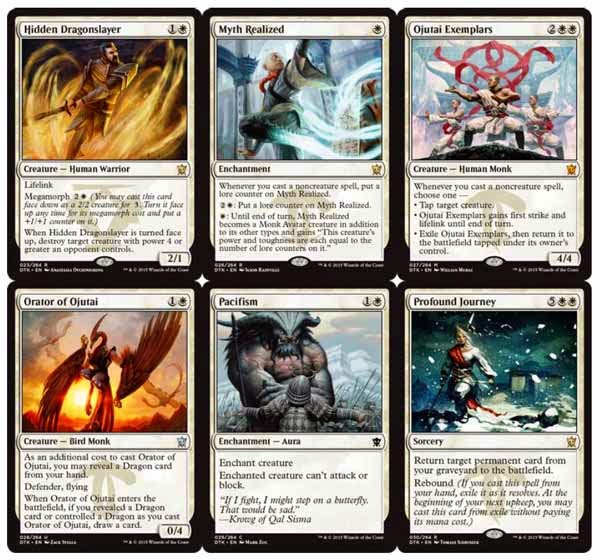 Hidden Dragonslayer: Dragon hoser with a low Megamorph cost and its a 2-drop Warrior. Nice in the current Standard!
Myth Realized: Free effect in a White/Blue/Red Prowess deck and its a one-drop. Very nice with KTK cards.
Ojutai Exemplars: White Aetherling, great card and worth being Mythic. Could be one of the money cards of the set.
Orator of Ojutai: Dragon deck wall, skip.
Pacifism: Welcome back, old friend!
Profound Journey: Esper (White/Blue/Black) Control Reanimator as a 7-drop. Good in a deck full of disruption and a gigantic critter in the graveyard. Too fat for Modern. 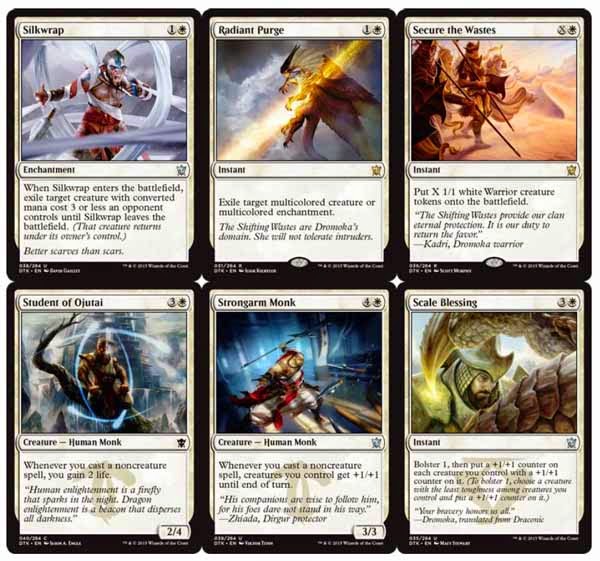 Silkwrap: Faster Oblivion Ring. Good fit as a stall in a Dragon deck, skip.
Radiant Purge: Hoser for Theros Gods, too narrow, skip.
Secure the Wastes: Awesome card! I hope it does not become a money card. Auto-include in a Warrior build.
Student of Ojutai: Ajani's Pridemate says hello as a late game buffer. Too heavy as a 4-drop for Soul Sisters in Modern and triggers only on non-creatures. Skip.
Strongarm Monk: Late game Prowess buffer, skip.
Scale Blessing: Late game Hardened Scales booster. Its a maybe because of the 4-drop CMC.
Posted by Rubiera