Modern Masters 2015 Show me the Money

If you are speculating on the paper version of Modern Masters 2015, I am sure you will do fine, just don’t crack those packs for a while! I am passing on the paper version just as I did for the first Modern Masters (I will just use MM1 and MM15 as the acronyms for these sets). Wizards is a for-profit company, and they did the smart thing this second time by getting in on the action the speculators got into last time selling paper packs at $10 that Wizards sold at $7 MSRP.

The financial discussion for MM15 gets complicated by how the Modern player base may shrink or expand. For MM1 I forecast-ed correctly that the new supply would be outstripped by the new demand: there were more players added to the player base than there was MM1 product for, on paper and online. For MM15, I see several factors that could be different:

1.    I don’t see a new large expansion in the number of players as we saw for MM1. I think there will be an expansion of the player base, but it will be much smaller independently of how MM1 compares to MM15 in Estimated Value (EV). There were only so many players who had Extended and Standard stashes who wanted to move in to Modern when MM1 came out, and now all we are going to get is a small increment to add to the MM1 new player base and the pre-MM1 player base. I am one of the players who came into modern with MM1.

2.    {I use the term ‘limited’ to mean draft and sealed play} MM1 had the advantage of being the first of this type of set. It had a very large selection of cards to pull from to end up with ten clearly defined color pair limited archetypes. MM15 has a slightly larger selection, but the limited design had to go elsewhere and there are only so many limited archetypes in Modern (Infect is a notable new one). MM15 is at a disadvantage in the limited design space and limited sells a lot of packs on paper and online. How the limited experience compares between MM1 and MM15 is something no one can predict well before the set gets played.

3.    We will likely see a ton of packs cracked because idiots like yours truly love to open packs even if they contain mostly crap cards, like Tempest Remastered does, but I see less of a return for limited players when they sell the individual cards they get in their events. The money rares and mythics look solid, and compare well between MM1 and MM15, but the EV issue here has to do with the lower expected number of new players joining MM15 than was the case for MM1.

4.    Paying $10 for a pack on paper will piss a lot of people off who only buy one box or less than a box. If they get a typical box, or crack only a few packs, the Estimated Value (EV) will mostly suck. This is what happens to collectors like yours truly who opened a pack of Ravnica: City of Guilds and got 25 cents worth of cards out of a $10 pack. There will be a river of tears about bad pulls for MM15 and only because of that small price difference ($7 for MM1, $10 for MM15). I just watched the other day a video of a German player cracking one mythic out of a box... that just sucks.

5.    Paying $7 to crack a pack online as I did for MM1 will happen a lot less often for many players this time around. I had a blast opening $7 VMA packs, and made some great pulls. That was NOT the case for MM1. Those pulls were terrible (I am looking at you Kamigawa Dragons!). If I open MM15 packs online, it will be as a Hail Mary crack just for fun… and I need to convince myself not to blow hard-earned money that way. I can spend that $7 on 5 packs of Rise of the Eldrazi, and I have already opened three Emrakuls and five Inquisition of Kozileks!

This time around I am going after a few must-have staples, cards that go in every deck, or that I want to play, but I intend to be a lot more selective this second time around, and I hope I don’t crack ANY packs online for this set. Maybe if they go for like $2… maybe. But they won’t, because there are many players who will play the limited lottery and there are also many players who want to open a Goyf. I am not one of them.

In addition, I suck as a limited player, and that means no events for me. On a bad note, Wizards, what were you thinking with the Red-Black limited archetype? Vampire Outcasts and Stormblood Berserker at uncommon? Ouch, that’s ‘Saviors of Kamigawa’ bad.

But I want to end on a good note. This set has some sweet Modern Staples that I will be following in weeks to come, and getting the ones I need as singles. The rare and mythic rare picks are solid, and I think Wizards did a very good job with these selections. This is a set made for the singles buyer because of the lower EV yield, which, if I am correct in pinning on lower expected new players, will have little to do with the individual cards that are in the set (Splinter Twin, Remand, Cryptic Command, get into my collection, now!). 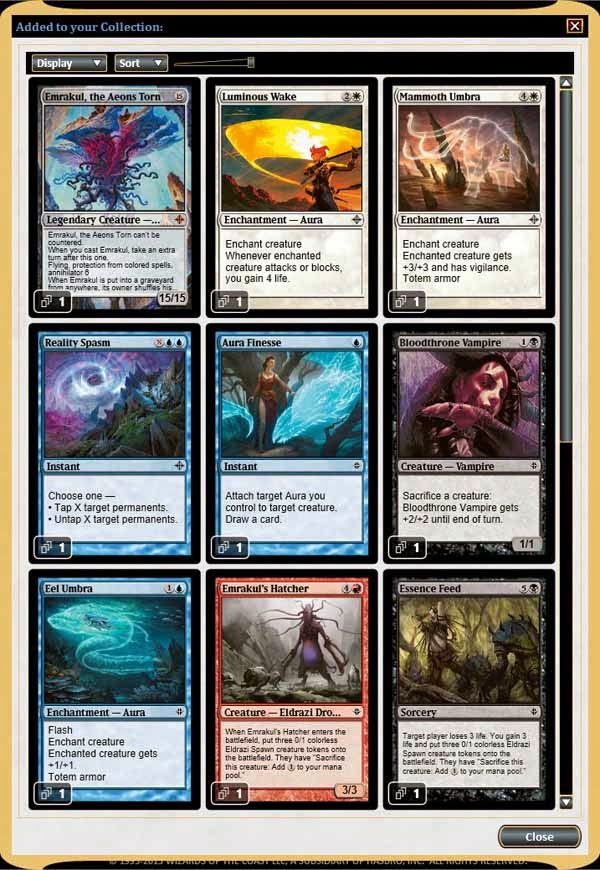 Link to Part 9
Posted by Rubiera