Oath of the Gatewatch Review: Blue

I can't wait to play with the new Blue Eldrazi! (2HG means Two-headed Giant, a format in which players play in pairs)

Abstruse Interference: good for limited, not sure if I will play it in constructed. For latter, I will really have to need that token.
Cultivator Drone: great mana dork ability, except it should be on a one-drop or two-drop. 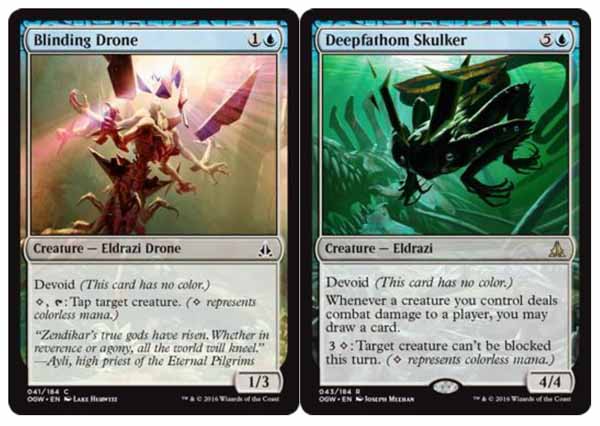 Blinding Drone: limited tapper.
Deepfathom Skulker: a little heavy but with two great effects. I will have to put it in a deck full of counterspells and see what happens. 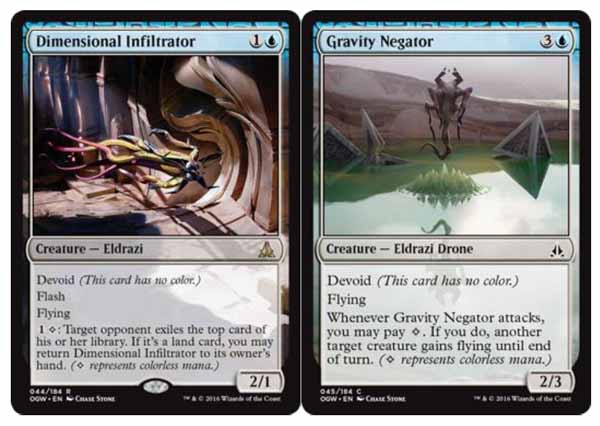 Dimensional Infiltrator: I really like this card. It reads like a Modern/Legacy plant. It is in blue-the color of Legacy, it is a two-drop, and it has Flash and Flying plus evasion.
Gravity Negator: solid in limited.
Thermal Refrigerator: just kidding! 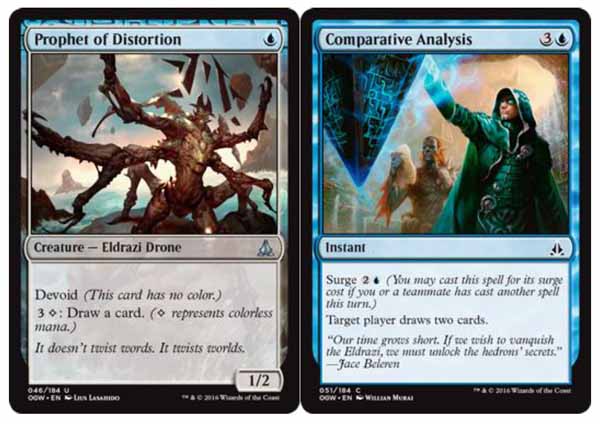 Prophet of Distortion: sweet uncommon. It will be a common target of my opponent's removal, but if it lives, I am getting card draw for 4 mana, and that is pretty good if I have unused mana laying around.
Comparative Analysis: 2HG card for limited and paper unless a miracle happens and 2HG is again available online. 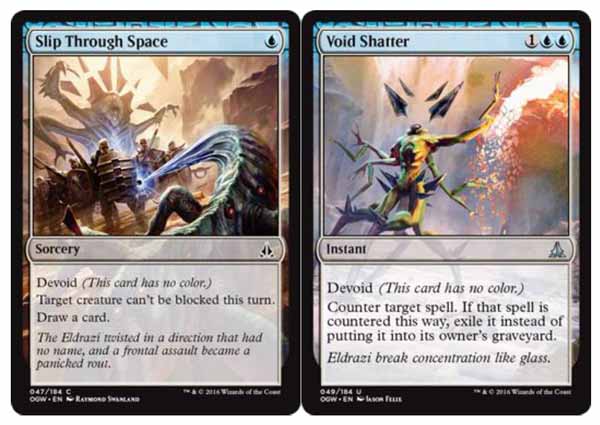 Slip Through Space: I really like this card. "draw a card" on any one drop gets my immediate attention.
Void Shatter: solid, very solid. Uncommon and an instant, must have. Yet another improved Cancel. 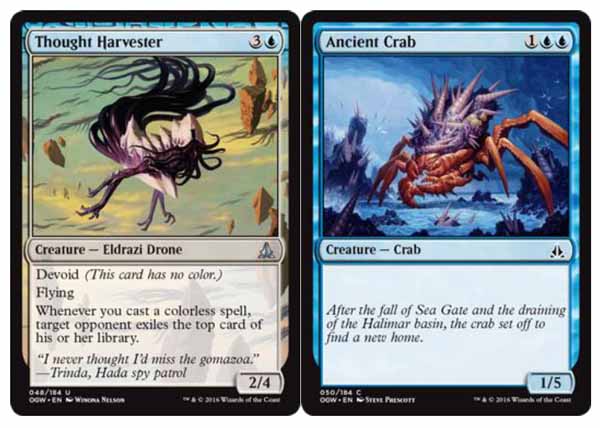 Thought Harvester: great for Standard constructed mid game.
Ancient Crab: great stall creature, and it does not have Defender. 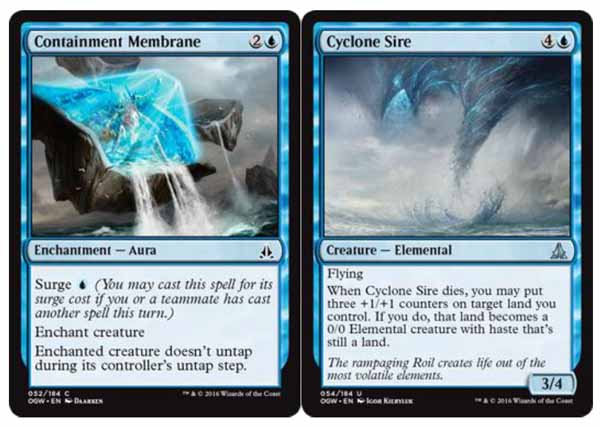 Containment Membrane:  an improved Claustrophobia. Looks like an auto-include in limited.
Cyclone Sire: for my Awaken Standard constructed deck. 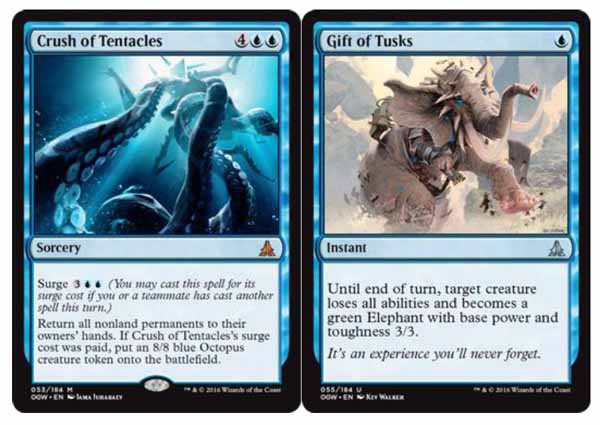 Crush of Tentacles: too situational outside of 2HG. There are many other better ways in Modern to play this effect.
Gift of Tusks: very good as a one drop. I can see uses for it in a deck that has Lightning Bolt. 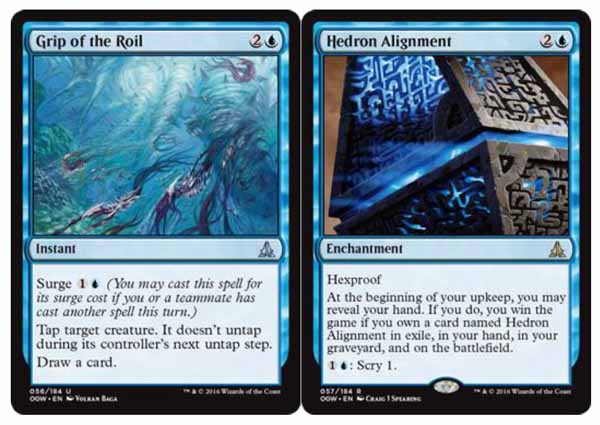 Grip of the Roll: solid tapper, not sure if good outside of 2HG.
Hedron Alignment: hyped to oblivion by Wizards and card re-sellers as Collected Company was before it. Worth a Johnny good try and then never play it again. Jwar Isle Avenger: limited 2HG.
Sphinx of the Final Word: any good deck in which you cast this card must have other cards that will let you win the game before you need to cast this. This statement applies to all Sphinxes and all Dragons. I will likely face this card when I play against control shells in Standard. 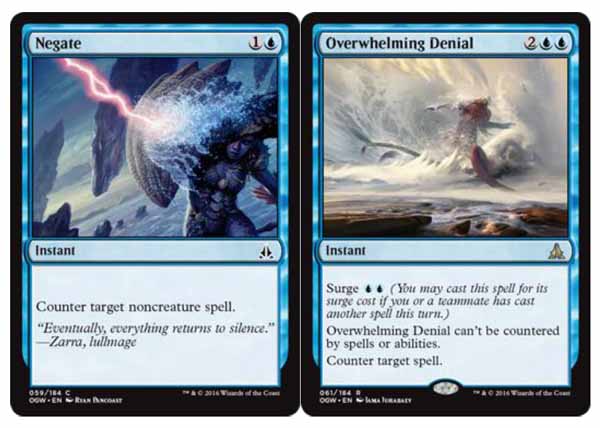 Oath of Jace: if we had a bunch of one and two-drop planeswalkers, this card would be insanely powerful. It will be good, just not really good.
Unity of Purpose: Love the name of this card. This card is really good in Esper for Outlast triggering. A little too heavy for Modern, perfectly costed for Battle Cruiser standard. 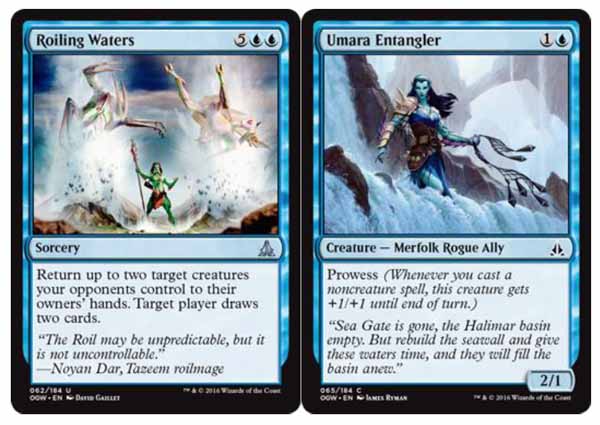 Roiling Waters: as a 7-drop? I don't get it. Divination gets you two cards for 2U, and Into the Void gets you the other effect for 3U. A one mana discount should have been in order at uncommon.
Umara Entangler: Prowess is great, and this is common. I like it a lot. 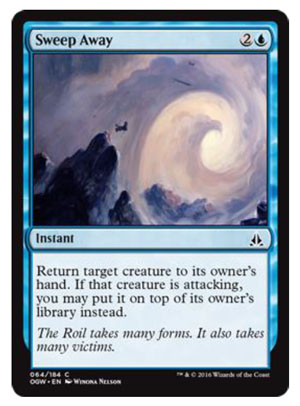 Sweep Away: Definitely a better, if conditional, Griptide (3U Put target creature on top of its owner's library.) A solid common in limited and constructed.
Posted by Rubiera