Hour of Devastation: Artifact and Lands

I really like the split cards in this set. 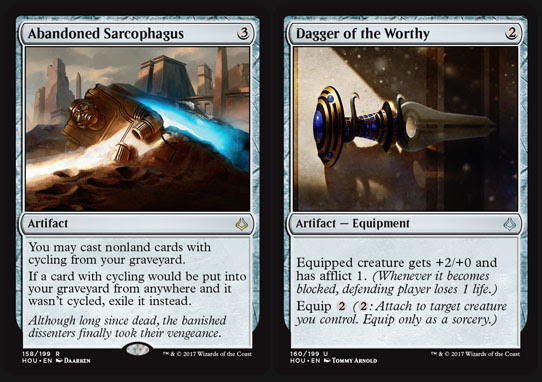 Abandoned Sarcophagus: Well, here is one fine treasure hunt. The backbone of a 'cycling matters' deck. I love it. It's Grafdigger's Cage strong. It will only get better as more cycling cards are issued years from now. You only need a few of these in your deck since a second one on the board does nothing.
Dagger of the Worthy: Equipment is overcosted in battlecruiser... Dagger of the Overcosted. 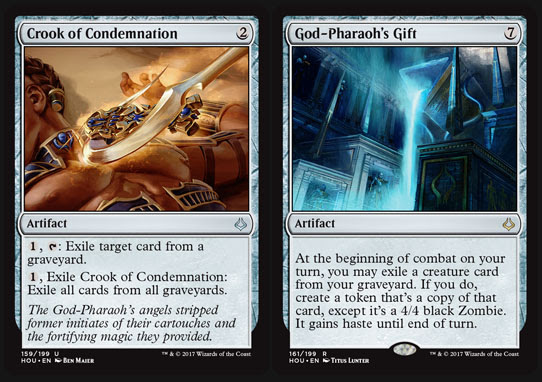 Crook of Condemnation: A good way to buy time against Aftermath and any other Reanimator effect. In the absence of Nihil Spellbomb, it's good. (1 Artifact Tap, Sacrifice Nihil Spellbomb: Exile all cards from target player's graveyard. When Nihil Spellbomb is put into a graveyard from the battlefield, you may pay Black. If you do, draw a card.)
God-Pharaoh's Gift: A fun card, to be sure. By the time you can spend seven mana on this, you should have won the game a myriad of other ways, but being a Johnny deckbuilder, I would love to win a game with this effect. 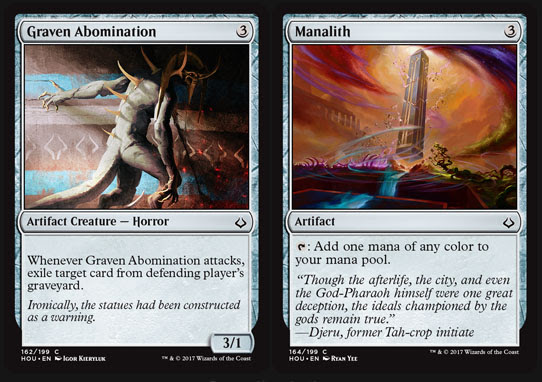 Graven Abomination: Much better in Limited than in any other format.
Manalith: Solid mana rock in Standard. It goes well with the 'tap your lands next turn for a benefit' cycle. 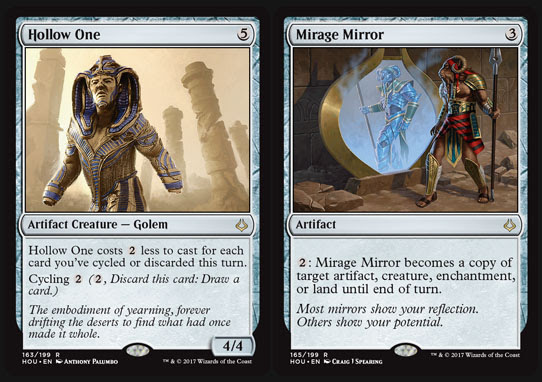 Hollow One: I love it. It can be a free cast early game. That is just awesome.
Mirage Mirror: This one is amazing. What a beautiful design. It is aggressively costed and can be part of a specific strategy. You only need enough of these to cast one. 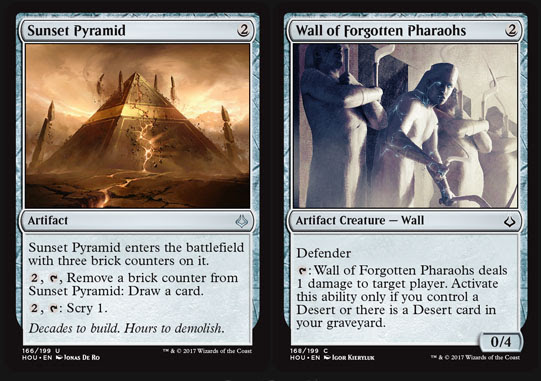 Sunset Pyramid: That's a great cantrip rock. It can come in really early, and it sits there giving you cards. What's not to like? I would bring it back to the battlefield and start all over with it.
Wall of Forgotten Pharaohs: Nice pinger in Limited. This type of card can come out of nowhere and win a game in Limited. All that needs to happen is for your opponent to not be able to remove it, and for you to be able to stall the game out for as many turns as possible. 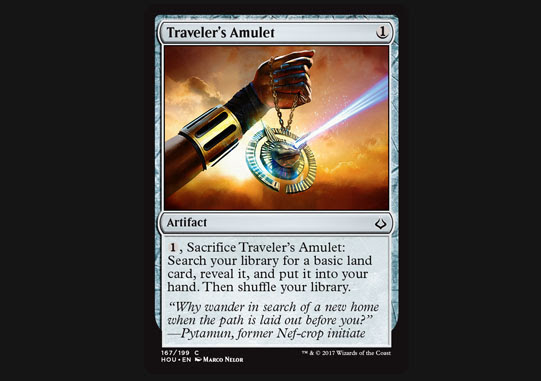 Traveler's Amulet: It's one of several ways to get a splashable land, especially in Limited. 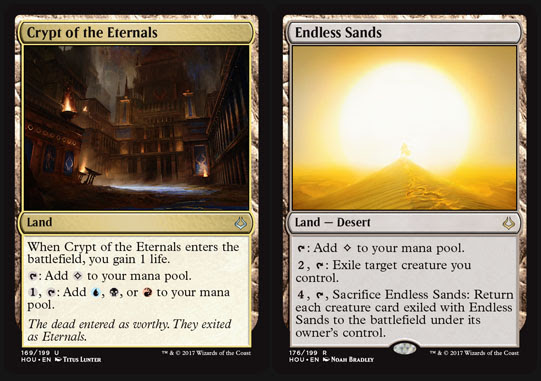 Crypt of the Eternals: This land helps the Nicol Bolas deck in Standard.
Endless Sands: A great way to save a creature that is about to be destroyed or has been neutralized or weakened. 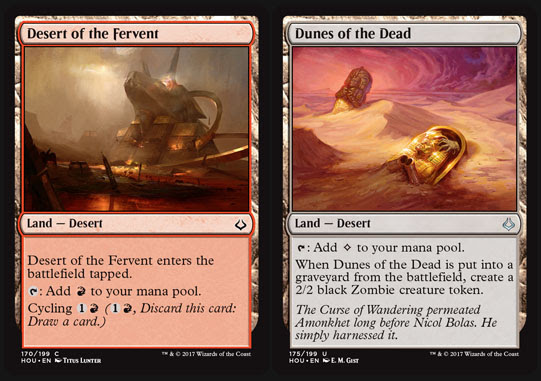 Desert of the Fervent: There are five of these, one for each color. They all have the same costing for their respective color.
Dunes of the Dead: Losing a land to get a 2/2 token isn't the best strategy out there... 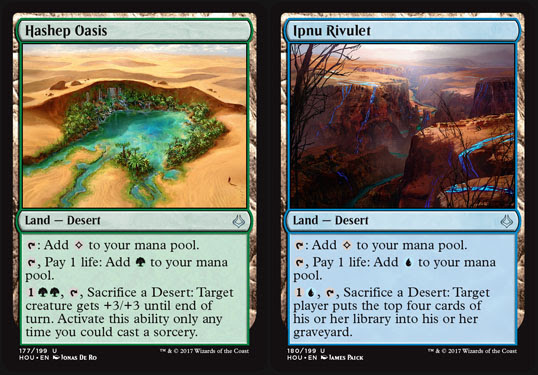 Hashep Oasis: I am only going to lose a land if the benefit is game-ending, or sets me up for the win.
Ipnu Rivulet: I can sacrifice some other Desert and keep milling with this one, but, again, I would sacrifice lands only to seal the win. 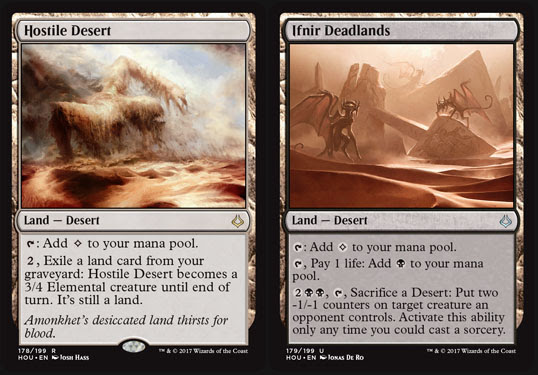 Hostile Desert: That is really good, really good. In a deck in which you fill your graveyard with creatures for other reasons, this is a very nice bonus.
Ifnir Deadlands: Four mana and a land for two -1/-1 counters? I don't think so. Only if its the last thing I need to do to win a game. 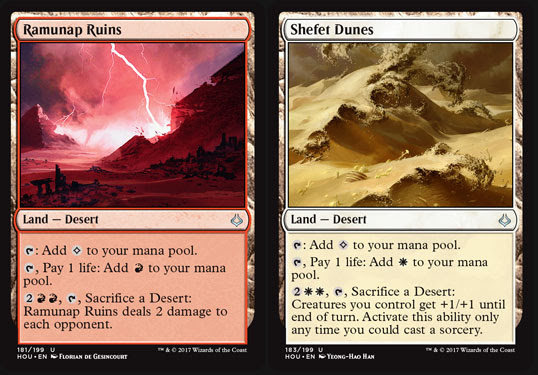 Ramunap Ruins: Not enough of a hit to be worth losing a land anytime except the very end of a game.
Shefet Dunes: This one is one of the better effects of this cycle, but only if you have a bunch of creatures that can attack. Again, this sacrifice cycle is great to end the game, and lame at any other time in a matchup. 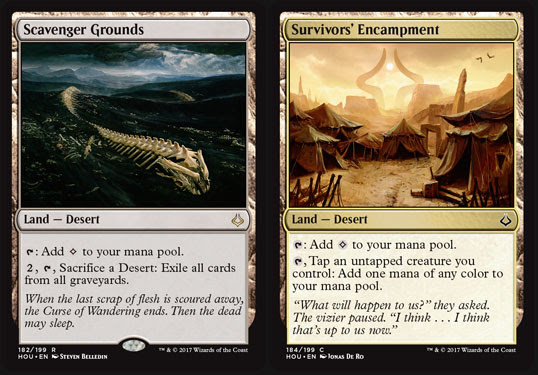