White was OK. I saw nothing spectacular by Johnny standards. Let's see what Blue has to offer. Aerial Guide: Useful in Limited, especially in Blue/Green with Green needing more flying.
Champion of Wits: Draw two cards, discard two cards, effectively. Eternalize will always be a great bonus. It would be great to flicker this creature. Flashback cards would fit a deck with this card well. Countervailing Winds: If it said 'for every card in your hand' I was going to throw a minor fit. It does not. I love it. I wish it was one less mana, but a common three mana counterspell with the graveyard clause ain't bad. And if you are having problems filling your graveyard, you can cycle it.
Aven Reedstalker: Solid Flash trick in Limited. 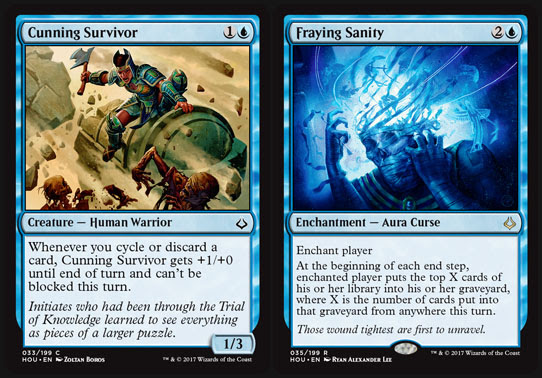 Cunning Survivor: I want to try the 'whenever you cycle' deck. I have no idea how much fun it could be. Definitely aimed at Limited.
Fraying Sanity: A 'mill the milled' effect, that is just awesome. A very creative card. I want to play it. It doubles the milling rate, and only at three mana! You can even couple it with a board wipe to your opponent and they get milled for as many cards as you destroyed. Oh, and you can force discard against your opponent and they get milled. Is this card a milling power house? It sure reads like it. Wait, I forgot the Eldrazi effect of exile to graveyard cards... Wow. 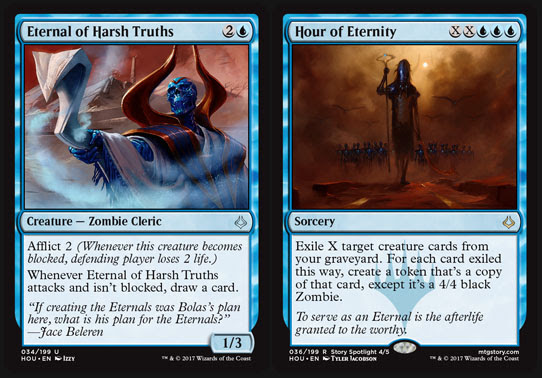 Eternal of Harsh Truths: 'Becomes blocked' is very interesting because of cards like Prey Upon. What you want is to keep your opponent's creature alive, and keep smacking it against this to hit to the face. If you run out of creatures to smack this against, you start drawing cards... what's not to like. I would buff it somehow, and then it will clean out my opponent's creatures before it starts drawing me cards.
Hour of Eternity: At X=2, this is a seven drop.... ouch. All you are getting is two 4/4s for 7. And you need to set it up with your graveyard. At X=3, this is a nine drop, and then you get three 4/4s. It can be a game-ender in a deck full of disruption and control. I like it, but it will most likely be a junk rare. 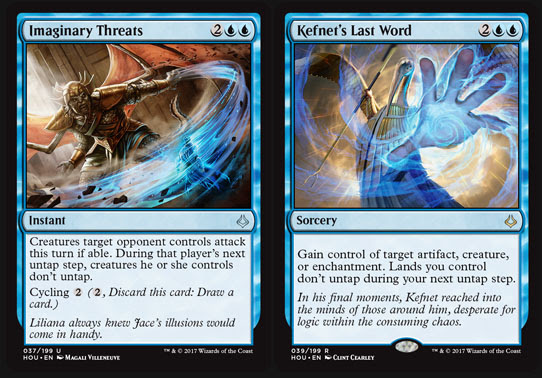 Imaginary Threats: The enabler an Afflict deck needs. I would build a deck in such a way that I never needed to cycle this, except in Modern there are decks that have next to no creatures, and against those decks, I would cycle this in the first game of the match and then stick it in my sideboard for the rest of that match.
Kefner's Last Word: With enough artifact mana rocks, the tap penalty can be minimized. I like it a lot. I like it more in the eternal formats, where the supply of artifact mana rocks are plentiful. 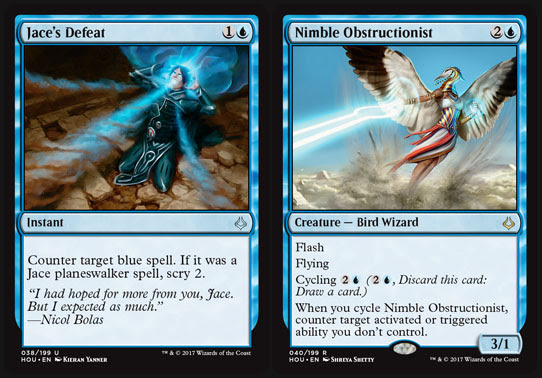 Jace's Defeat: It belongs in the sideboard, and against a deck playing Jace, the Mind Sculptor in Vintage and Legacy, it's a four-of in the main deck. I hope this lowers the value of Flip Jace (Origins).
Nimble Obstructionist: A poor person's Vendilion Clique (1UU 3/1 Legendary Creature — Faerie Wizard Flash Flying When Vendilion Clique enters the battlefield, look at target player's hand. You may choose a nonland card from it. If you do, that player reveals the chosen card, puts it on the bottom of his or her library, then draws a card.) Let's see: better mana since you don't need double blue. You can cycle it, but you would never have the need to cycle Vendilion Clique. If your opponent has no cards, you wait until they do. This one is weaker because your opponent may not have any activated or triggered abilities to activate. 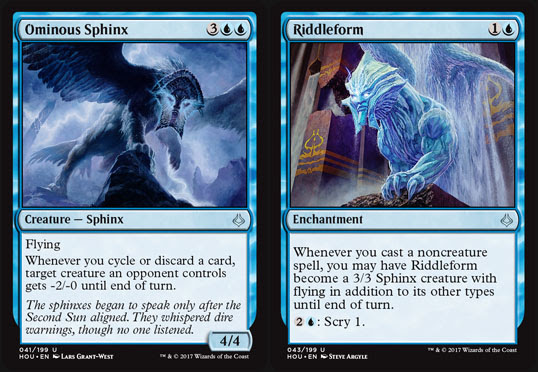 Ominous Sphinx: Cycle can happen anytime. This is a creature with an instant effect stapled on it. That's always good.
Riddleform: Now, that's a very creative design. It's similar to Angel's Tomb, but for noncreature spells. (3 Artifact Whenever a creature enters the battlefield under your control, you may have Angel's Tomb become a 3/3 white Angel artifact creature with flying until end of turn.) 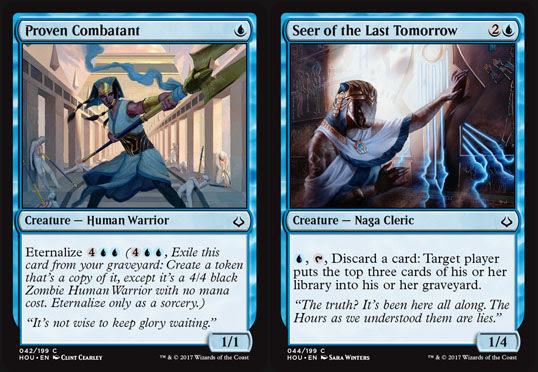 Proven Combatant: I will take any blue one drop. It's square as a vanilla creature (1/1 for 1), and the Eternalize effect is just plain awesome.
Seer of the Last Tomorrow: Very useful in a mill deck. I can self-mill a little, and I can mill for a lot over time. 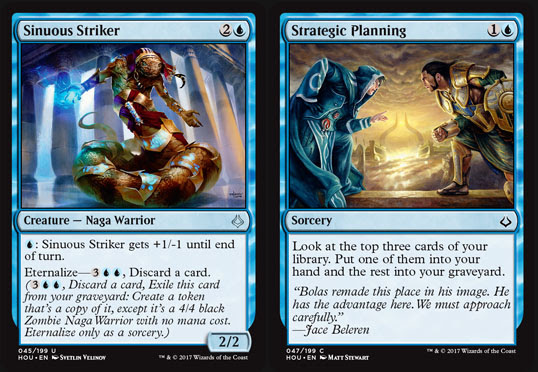 Sinuous Striker: Reasonable. If you can protect your graveyard, all these Eternalize cards can form a small game-finishing army of 4/4 tokens.
Strategic Planning: I love this effect. It sure makes up for us waiting for a core set for another year, at least for this one effect. 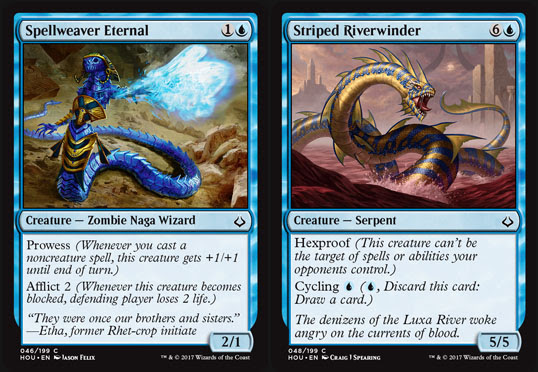 Spellweaver Eternal: Now, here is a super useful common. In most situations, you will get the Afflict benefit once, but you can buff it. Prowess on anything is good... really, on anything.
Striped Riverwinder: Cycling definitely makes it more useful. Draw it early, and it replaces itself with a new card. What's not to like in Limited? Well, it doesn't fly, that's true. 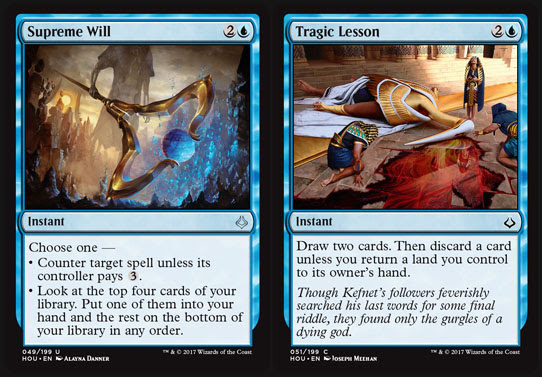 Supreme Will: Another Mana Leak for one more mana. For as long as we have battlecruiser, we will be getting one of these every other set. The deck manipulation clause can come in very handy.
Tragic Lesson: A nice lookback card for Landfall. In self-mill, the discarded card is to your advantage too. It reeks versatility. 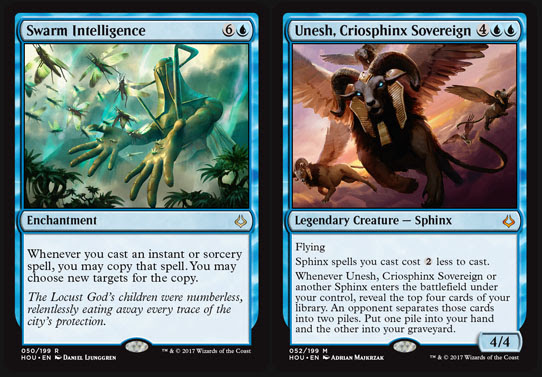 Swarm Intelligence: Great effect that belongs in next to no deck at seven mana. I am sure there is a very painful control deck out there waiting for this instrument of pain.
Unesh, Criosphinx Sovereign: Another junk rare in a long line of fat tribal helpers. Still cool as a Sphinx casual deck, though. I may try it just for Johnny kicks. Probably better in Commander. Unquenchable Thirst: Limited. I will still try in constructed because I like the Desert theme.
Vizier of the Anointed: That's a cool pair of effects. The second one is the better of the two in a deck full with those mechanics. The tutor effect triggers once unless you flicker this. 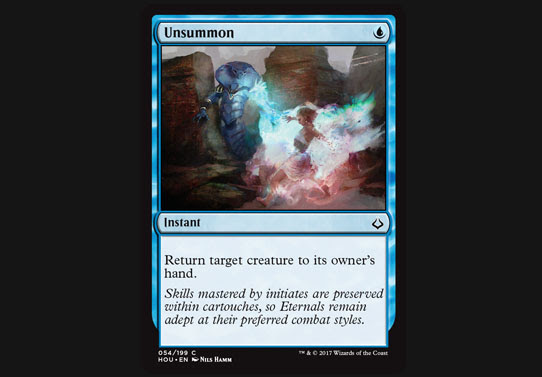