I am really looking forward to eight-set Standard. Let's go! 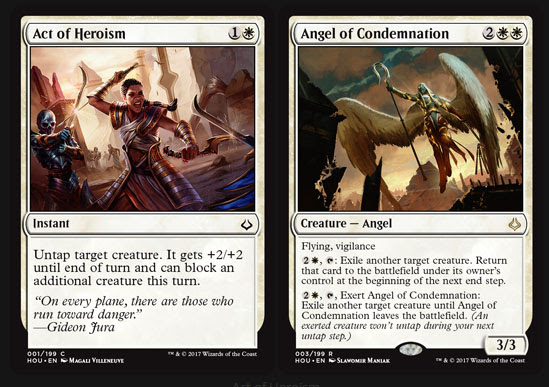 Act of Heroism: Limited battle trick.
Angel of Condemnation: Vigilance is always great. The first exile clause goes well with Eldrazi Displacer. I am still traumatized by how bad Exert was in Amonkhet. It could be that Exert is a little better in this set. This Exert clause invalidates the first exile clause, which makes sense. Otherwise, this card would be broken because you would Exert for exile, and then when Exert wore off keep on exiling other creatures. The 'until it leaves the battlefield clause' keeps the card unbroken. 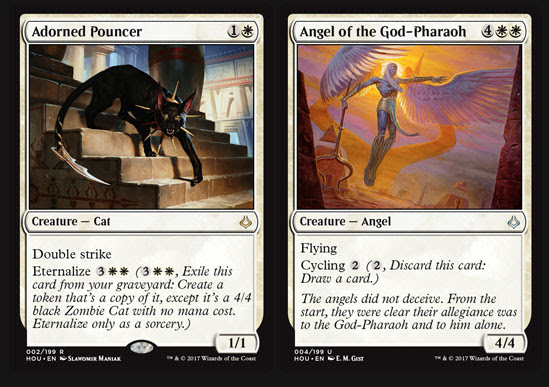 Adorned Pouncer: solid. It's an early drop with double strike and if it dies you get a 4/4 Zombie late game out of it. Actually, five mana is mid-game in battlecruiser Standard.
Angel of the God-Pharaoh: Cycling is usually an indication that a card is only good sometimes, almost a hint that this card will often be a bad play. This is what I don't like about Cycling. If it was Indestructible, I would be like 'oh, good.' But if it's Cycling, it's a warning that this card can suck enough in some situations that you would want to cycle it. I would play it in Limited. 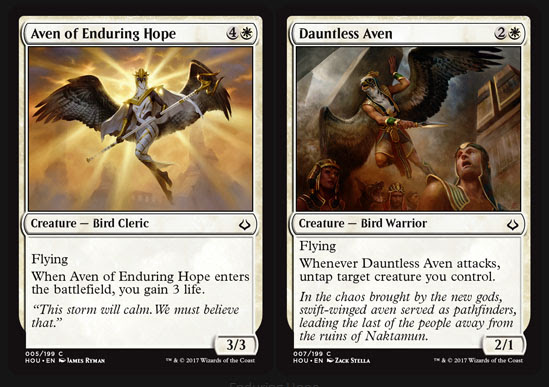 Aven of Enduring Hope: More like Aven of Limited Hope. You will need flyers in Limited.
Dauntless Aven: Solid in Limited. The untap clause will only be useful if you control a creature that you can tap for an effect before you attack. 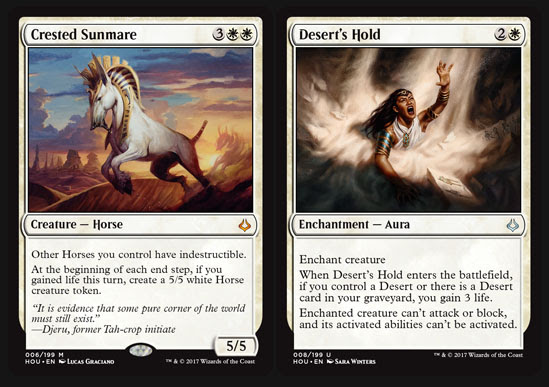 Crested Sunmare: It immediately wants me to build a Horse deck. It's two more mana than I would like to do that in Modern with, though. Compare with Knight Exemplar (1WW 2/2 Creature — Human Knight First strike Other Knight creatures you control get +1/+1 and have indestructible.) The token clause, though, is well worth the mana in battlecruiser Standard. It can't fly, though. It would have been amazing as a unicorn with Flying. I read junk Mythic.
Desert's Hold: Yet another battlecruiser variant of Pacifism, which is a two drop. All I really want to have this effect in my deck in Pacifism. The extra mana gives me a small bonus that I don't need. 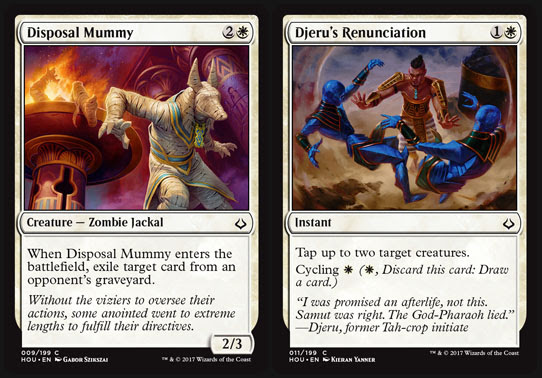 Disposal Mummy: Limited, and more like a sideboard card. It only exiles one card. If your opponent has two cards you want to exile...
Djeru's Renunciation: Good in Limited. This is one of those cards that are already good enough for what they are needed for minus the Cycling clause. 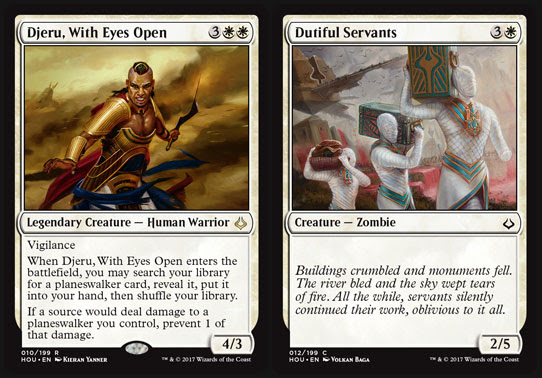 Djeru, With Eyes Open: Interesting in battlecruiser Standard. A five drop in Modern needs to be way stronger. The planeswalker tutor effect is cool, although you will still need to have the mana to cast that planeswalker, which is fine. The 'prevent 1 damage' clause is straight out of all those bad creatures in Legacy, though.
Dutiful Servants: I love vanilla creatures. Limited. We really need a 'Vanilla matters' deck. 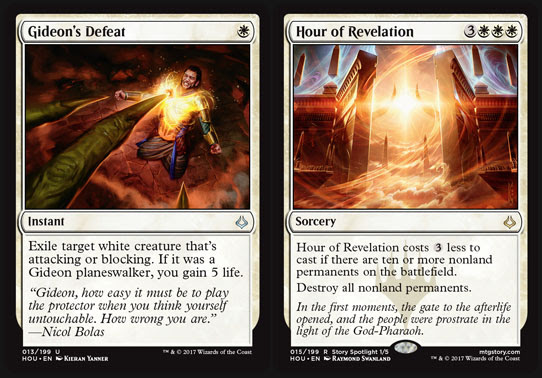 Gideon's Defeat: Sideboard in Limited and Standard given how many Gideons we have in this format. The Defeat cycle is just awesome in Standard and Modern.
Hour of Revelation: Interesting board wipe. I like it a lot. Now I need to come up with a deck full of permanents that return to the battlefield after they get destroyed, or have Indestructible. This is a great Johnny card. If you can use it consistently to wipe the board for 3 mana, you are in business. 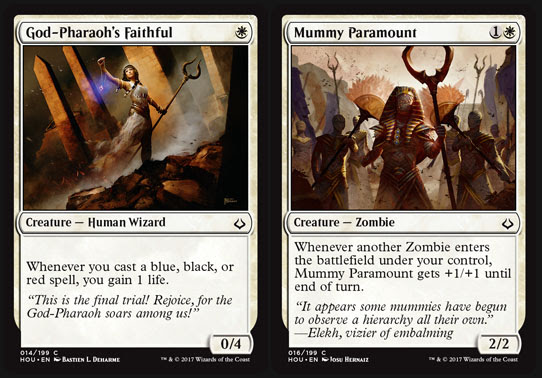 God-Pharaoh's Faithful: It puts you in a four color deck.... not sure you would want to do that in Limited. There is a five color deck out there missing this card. It plays great with the cards in Battle for Zendikar that give you a bonus for using as many colors as possible (Converge is the ability I am referring to).
Mummy Paramount: 'Until end of turn' is very rarely good outside of Limited. It needs to be something like 'gets +4/+4' for that. Good in Limited in this set because it is drafted with the White Zombies in Amonkhet. 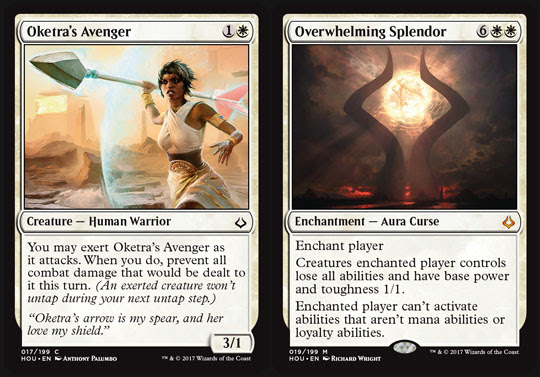 Oketra's Avenger: Unless I am missing something, this card sucks. If you Exert it, you save it from getting killed... sure. If it dropped a token when it entered the battlefield, it would be good. As designed, it does nothing besides get lucky to hit for three. It would make a cool vanilla creature. Maybe it's not as bad as I think it is. I think I am prejudiced against Exert, Cohort, and all tapping mechanics.
Overwhelming Splendor: Compare with Humility from Tempest (2WW Enchantment All creatures lose all abilities and have base power and toughness 1/1.) Yeah... four more mana. An interesting card that I think will see no play at such a high casting cost. Sure, it's a game-winning move, but what if your opponent wins the game one turn before you can drop 8 mana on this thing? This card needed a clause that reduced it's casting cost to four mana...maybe five mana, even six mana. 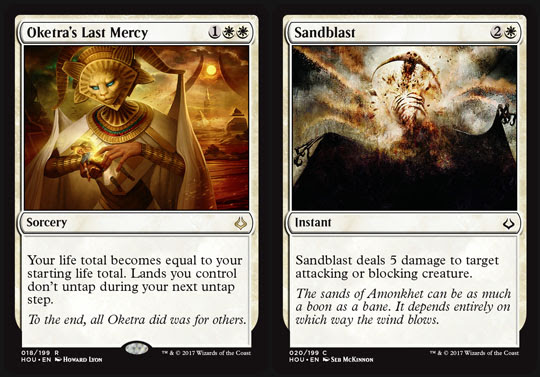 Oketra's Last Mercy: I think this card is awesome. You can use it in a deck with a bunch of artifact mana rocks and tapping your lands won't matter much. This card reads like it will be good in Vintage and Legacy.
Sandblast: Good in Amonkhet Limited. In any other limited environment, you need to have very few creatures above five toughness. It's a solid battle trick. 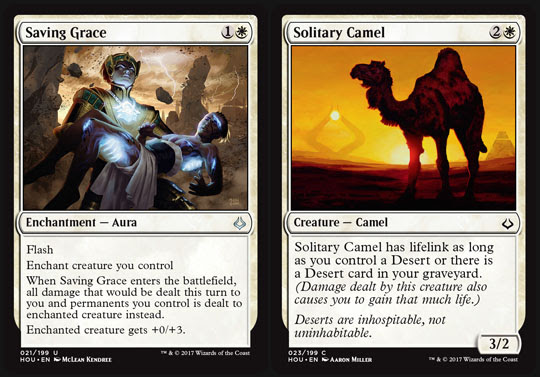 Saving Grace: Similar effect to Spellskite from New Phyrexia (2 drop 0/4 Artifact Creature — Horror
Phyrexian Blue: Change a target of target spell or ability to Spellskite.) It reads like a solid card. Flash means you can cast it as a battle trick.
Solitary Camel: Fun card. It's good in Limited as a vanilla creature. I am hoping we have a bunch of 'Desert matters' cards to build fun decks with. 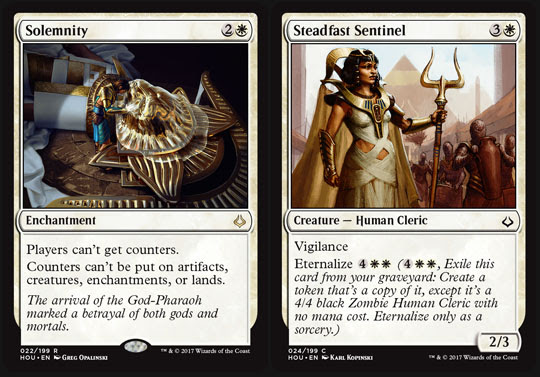 Solemnity: Nice... very nice. I think this could well be the very first counters hoser in all of Magic's history. At least, I couldn't find any other card that attains this effect. I must play this card. It has a home in a Death and Taxes deck and is well placed in White.
Steadfast Sentinel: Solid in Limited, can even be good in Constructed. I am loving Eternalize. It's a great bonus. 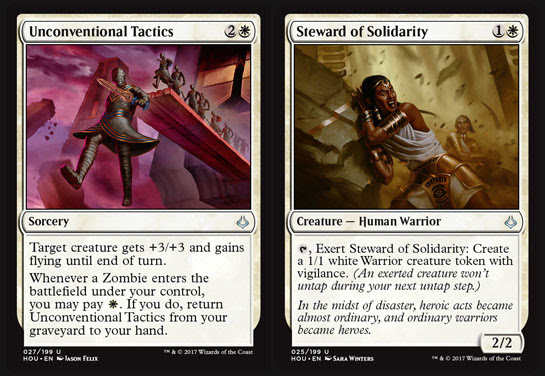 Unconventional Tactics: Wow, that's a really cool 'from the graveyard' effect. I really want to play this card. It complements the Zombie deck from Amonkhet well.
Steward of Solidarity: That's a good Exert clause... I guess some of them can be good. I would love to play this card. Tap it for a token, then use it next turn. I can do that. 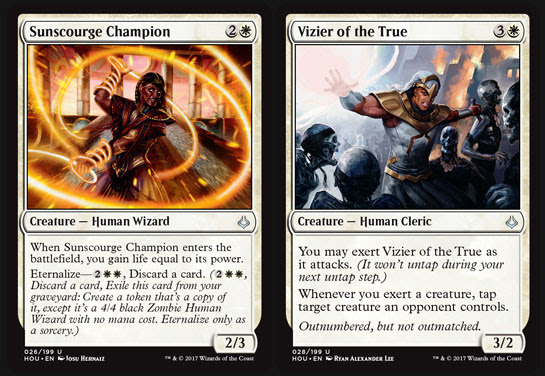 Sunscourge Champion: It will work well in a Soul Sisters type of deck, where you are rewarded every time you gain life. The Eternalize cost can even help you if you are in a reanimator deck. Very solid.
Vizier of the True: Here is yet another Exert card that does not suck. Tapping your opponent's better creature with one of your weaker creatures is always a great move.
Posted by Rubiera