I already have a few fun decks in mind. Let's see if I get more deck-building ideas from Black. 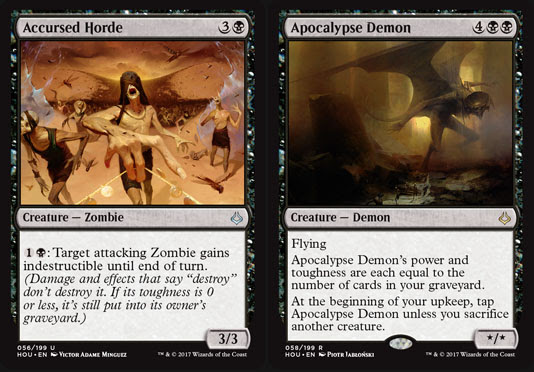 Accursed Horde: Nothing wrong with protecting your Zombies. It's not a Zombie I will be rushing to add to the Zombie deck as a playset, yet one or two could come in handy.
Apocalypse Demon: Reads like a junk rare. Having to sacrifice to keep untapped sucks. Way too much setting up. Once in a blue moon, it will be an overwhelming win. From Beyond will drop a 1/1 token every turn, though... I am still thinking about this one. 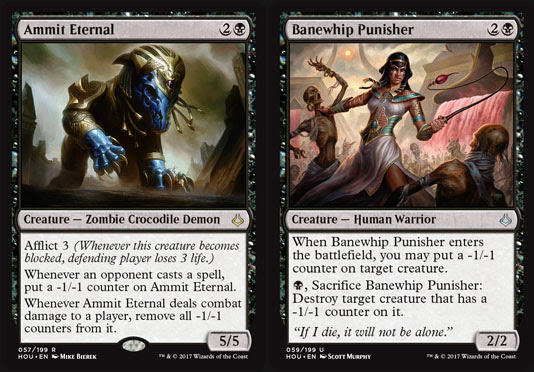 Ammit Eternal: Beautiful design, almost unplayable, and destined to be a junk rare. It needs your whole deck to survive. You can counterspell your opponent, yet they still got to cast whatever you countered. You would have to force your opponent to discard their whole hand to avoid those pesky -1/-1 counters, but they are drawing one card every turn. I will try it just because I love to play unplayable cards as a challenge.
Banewhip Punisher: Middle of the road Zombie. It's good, but you are exchanging it for your opponent's creature staying on the board. 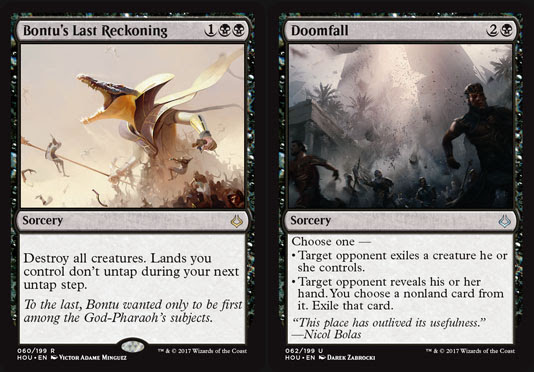 Bontu's Last Reckoning: I love all of these cards that tap you out for a great effect. Bring on the artifact mana rocks!
Doomfall: Very useful choices. I want it. True, your opponent will choose which creature. That can work out in your favor if you pick off smaller/less important creatures before playing this. The second clause is plain great because nonland can be many threats, and it's your choice. 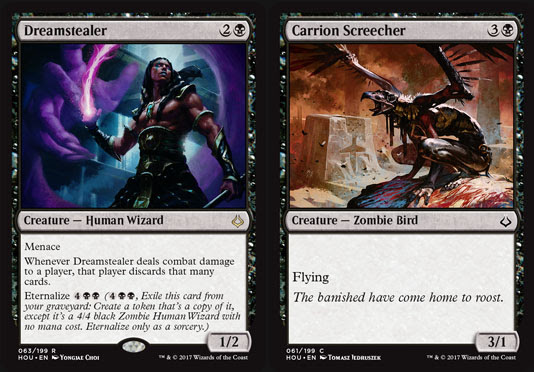 Dreamstealer: Very strong... very strong. It needs some help to maybe attack against only one creature, or it needs buffing, or it needs to be made unblockable. Some setting up can make this card really dangerous: hit for three and your opponent is discarding three cards. That can be crippling. And let's not forget Eternalize.
Carrion Screecher: Limited flyer. 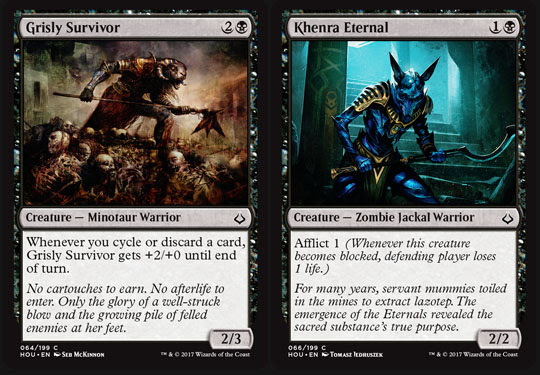 Grisly Survivor: I am loving these cards, even if they only end up being good in limited.
Khenra Eternal: A bear with a small upside. Afflict 1 is almost like Deathtouch on a bear or a one drop, though. It's a deterrent, allright, but can be played around. 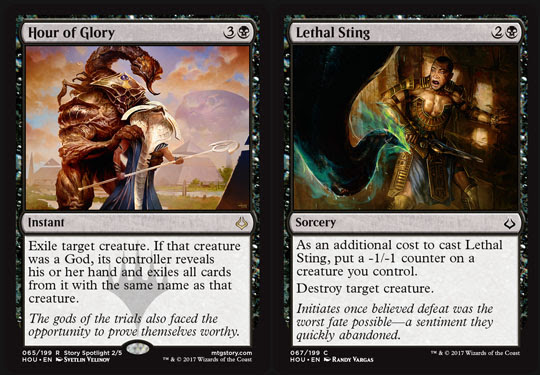 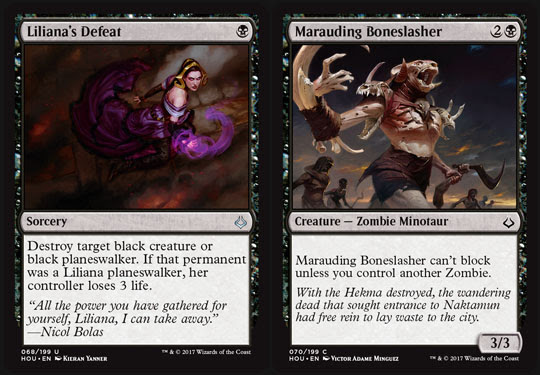 Liliana's Defeat: Can this card reduce the value of Liliana of the Veil in Modern and Legacy? I hope so. It begins the match in your sideboard, and it may never leave it!
Marauding Boneslasher: Limited. 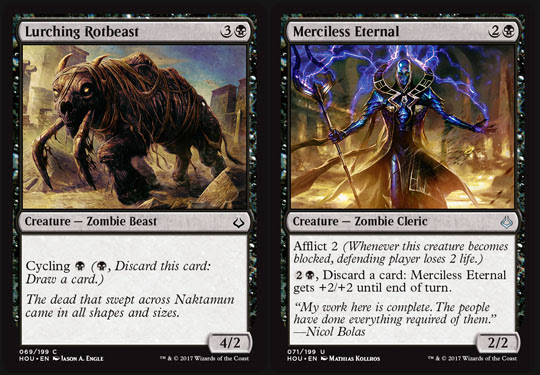 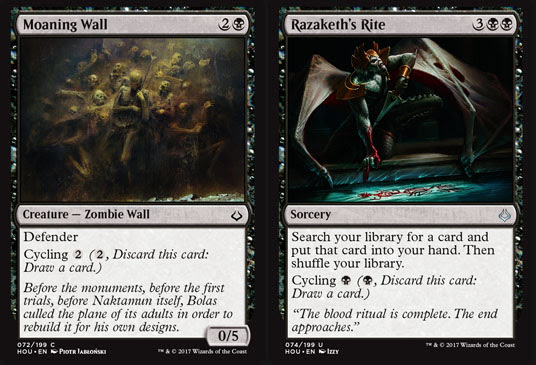 Moaning Wall: Limited.
Razaketh's Rite: In a long line of over-costed tutors. Compare with (just for kicks) Demonic Tutor (1B Sorcery Search your library for a card and put that card into your hand. Then shuffle your library.) 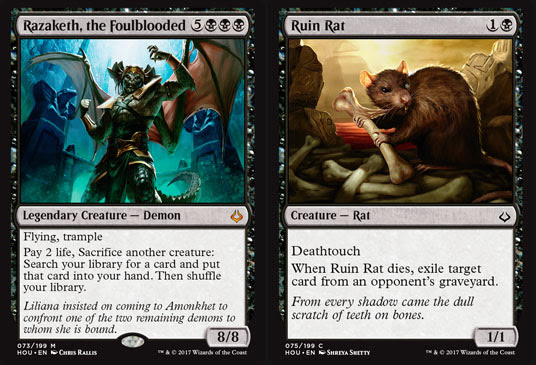 Razaketh, the Foulblooded: It ain't no Griselbrand (4BBBB Legendary Creature — Demon Flying, lifelink Pay 7 life: Draw seven cards.) 7 cards will cost you 14 life and 7 other creatures with this dude.
Ruin Rat: Ahhhh, rats. One of my favorite tribes. It's a new card, though functionally, it is the same as Typhoid Rats. 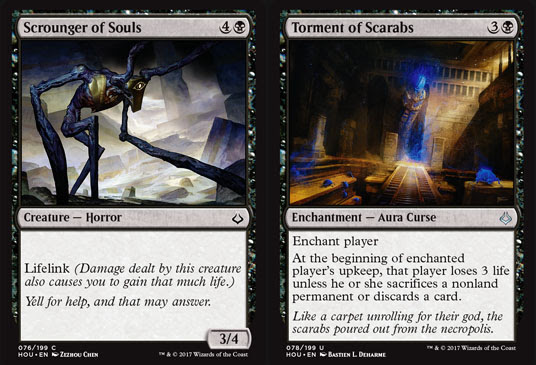 Scrounger of Souls: Limited. In 'minus two' it would be a 3/4 for three mana with Lifelink.
Torment of Scarabs: I wonder how all of these new curses fit into the Innistrad/Dark Ascension curses... It's a little too heavy to be a bomb, yet I want to play it in a curse deck and see how far it can go. 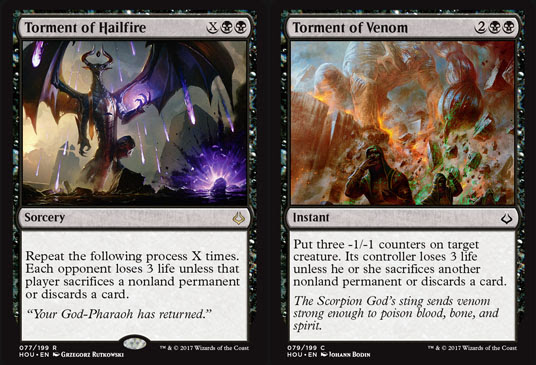 Torment of Hailfire: Wow.... let's think this one through. X=5 is a seven drop and your opponent does this five times. That can be crippling. Compare with Cruel Ultimatum (UUBBBRR Sorcery Target opponent sacrifices a creature, discards three cards, then loses 5 life. You return a creature card from your graveyard to your hand, draw three cards, then gain 5 life.) It's very different, yet is in the same 'club.' Can it be better than Cruel Ultimatum? I don't know.
Torment of Venom: Should be really good in Limited. 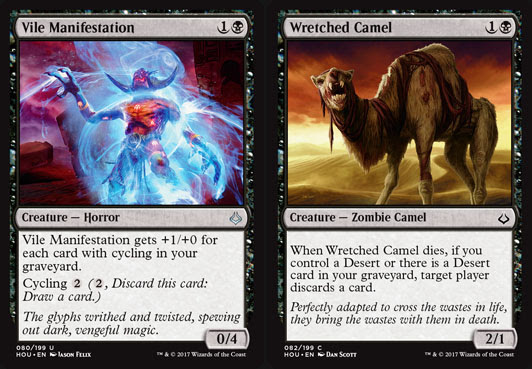 Vile Manifestation: Pretty cool. I so want to build a few 'all about cycling' decks.
Wretched Camel: It's cool. Pick up all my deserts in my four packs during the prerelease and see what happens. I am a sucker for these cards, even when I know they suck. They are equivalent to the Guild Gate cards in Return to Ravnica block. 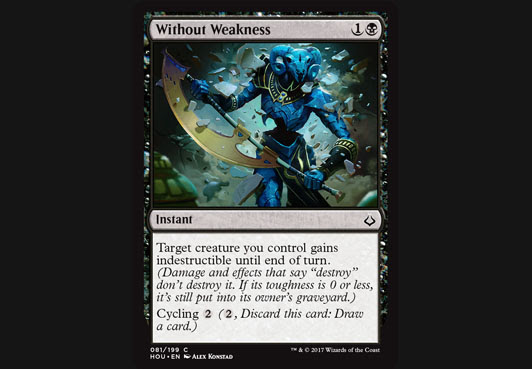 Without Weakness: A good trick in Limited. I don't know if it's useful in constructed.
Posted by Rubiera