Small sets are harder to gauge in a vacuum because they are designed to complement the large set, especially in the two-set Large/Small era that thankfully will end soon. 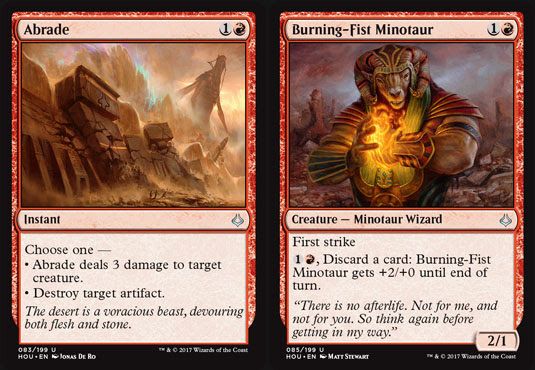 Abrade: Good hoser against Kaladesh block. It sucks when a card says 'to target creature' and is missing 'or player.' It just sucks.
Burning-Fist Minotaur: It's all-right, although red is a poor fit in a strategy where discarding is a positive. 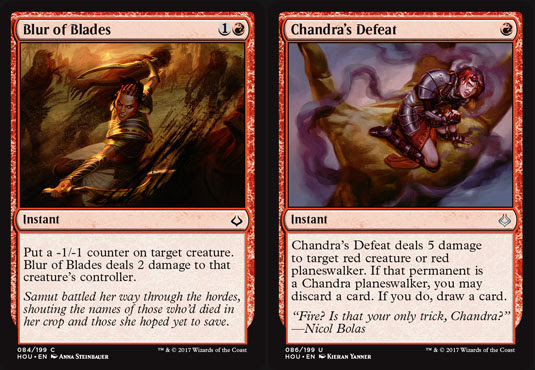 Blur of Blades: Good in Limited. Dealing damage to player has become scarce in battlecruiser.
Chandra's Defeat: Another planeswalker hoser. It's the least impactful of the five because all Chandra planeswalkers are not playable in Modern. In Standard, it's a much more even playing field on account of Chandra, Torch of Defiance. 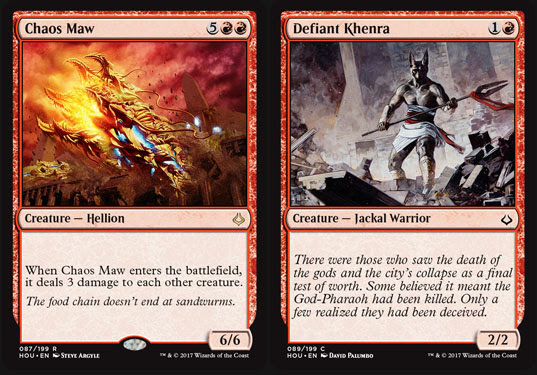 Chaos Maw: A late game board wipe in Standard. That should be good. It's a seven drop, though. It does not have a clock like heavy hitters that dominate Standard.
Defiant Khenra: We need Vanilla-matters cards. 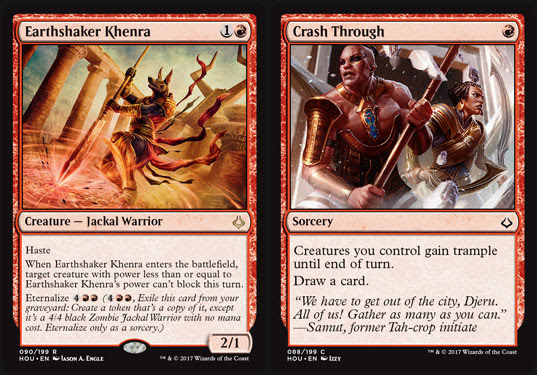 Earthshaker Khenra: It reads solid. The 'can't block' effect is limited to small critters. The Eternalize bit is good on any card. Maybe Red Deck Wins will be viable again.
Crash Through: A one-drop common that reads 'draw a card'? What's not to like? 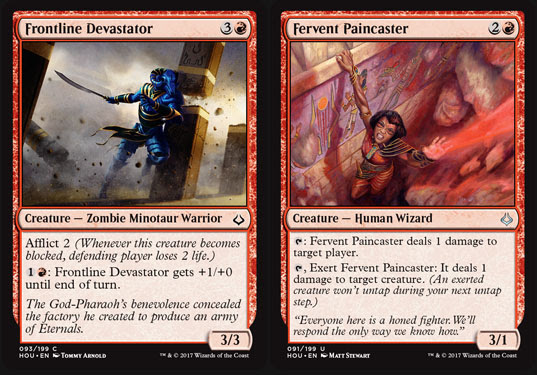 Frontline Devastator: That's a good common. Afflict 2 should be a good deterrent, and Red/Green has plenty of Prey Upon cards. It's good to use all left-over mana to pump it as well, and it could even be an invitation to trigger Afflict rather than take a full hit.
Fervent Paincaster: I think this is a lame card, even if an uncommon. Tap it for 1 all you want, it's a very slow clock. 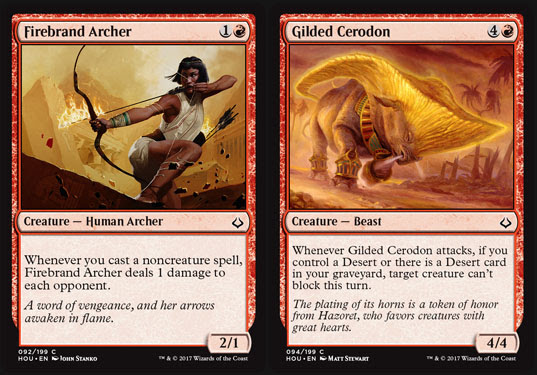 Firebrand Archer: 'to each opponent' is great in multiplayer with multiple opponents with separate life counts. It's a decent uncommon.
Gilded Cerodon: Solid in Limited. I haven't seen too many 'Deserts matter' cards. 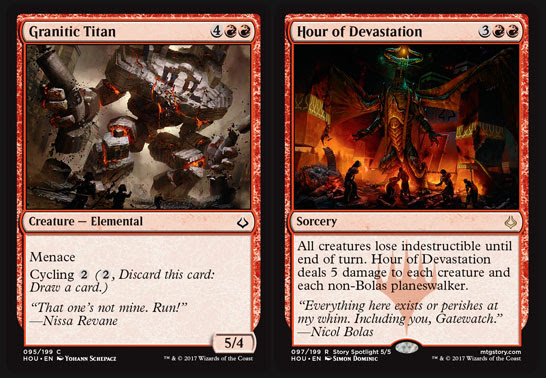 Granitic Titan: solid in Limited.
Hour of Devastation: That's cool: a card named after the set it is in. Good to clean the board, although it leaves behind bigger threats. I really like the hit against planeswalkers. 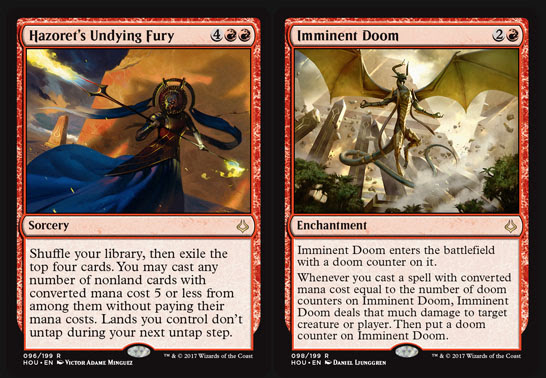 Hazoret's Undying Fury: The 'you are tapped out next turn' cycle is really good. It's still a junk rare at six mana because it will not end the game outright when it resolves. You have to shuffle before you pick the four cards, and that means you can't Scry for good stuff. It's non-land cards, and that means you can score two, maybe three free casts within the mana range specified.
Imminent Doom: That's an awesome clock. It says 'target creature or player.' I want more than one on the board, and I want to protect these for dear life. That means a Blue/Red deck with a full suite of counter-spells. This is definitely a card I want to play. 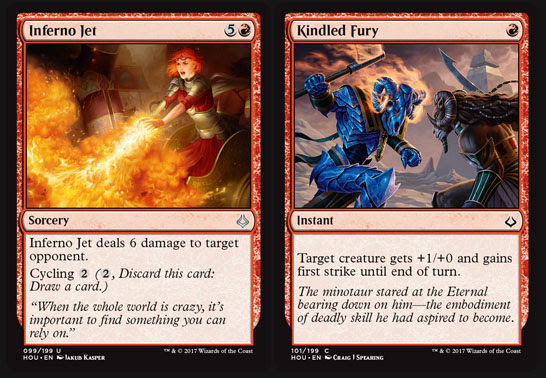 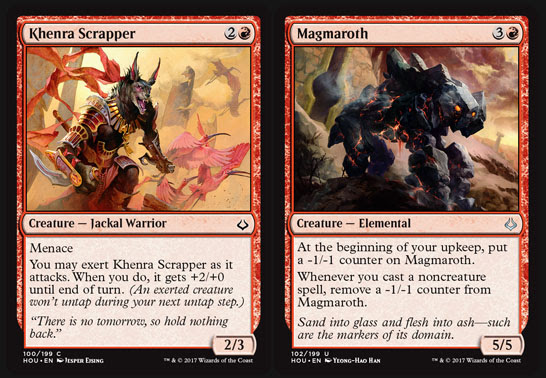 Khenra Scrapper: Limited Exert card similar to the weaker Exert cards in Amonkhet.
Magmaroth: Interesting in a Blue/Red deck with a large number of noncreature spells. 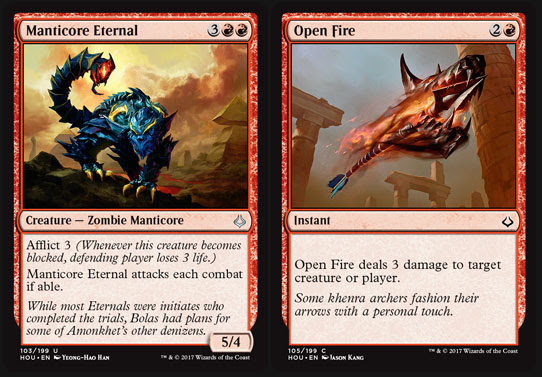 Manticore Eternal: This is the Afflict card I want to play. It has to attack every turn, which increases the odds of it dying early by a lot. I would play it with Black to make sure I take out the creatures that can kill it when blocking.
Open Fire: the battlecruiser effect that allows other battlecruiser creatures to live. Compare with the previous power-level: Lightning Strike (1R Instant Lightning Strike deals 3 damage to target creature or player.), and, all the way from Limited Edition Alpha, Lightning Bolt (R Instant Lightning Bolt deals 3 damage to target creature or player.) 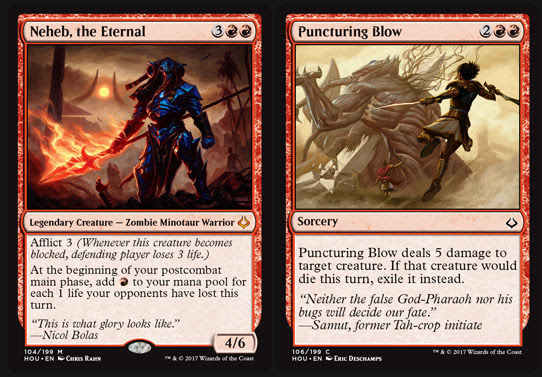 Neheb, the Eternal: Oh, I like this one a lot. I would play in in Red/Black and hit for a lot. It can also be a finisher in Red Deck Wins. So many ways to play it... so many ways.
Puncturing Blow: Solid in Limited. 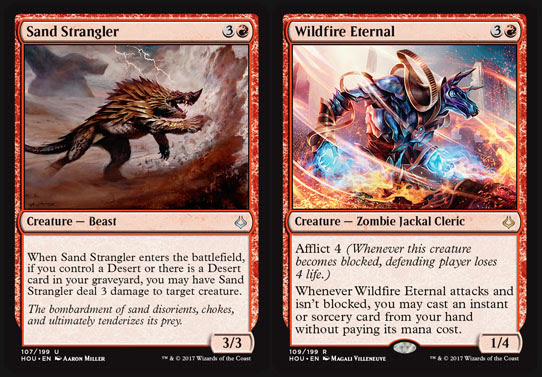 Sand Strangler: Cool, I like the Desert theme.
Wildfire Eternal: Oh, wow, this is wild! Make it unblockable, cast something huge. 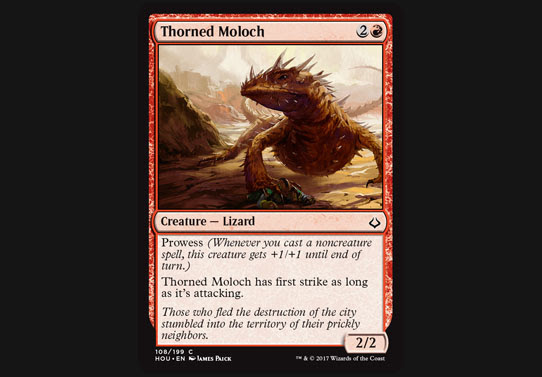 Thorned Moloch: nice common! Prowess on anything is awesome.
Posted by Rubiera