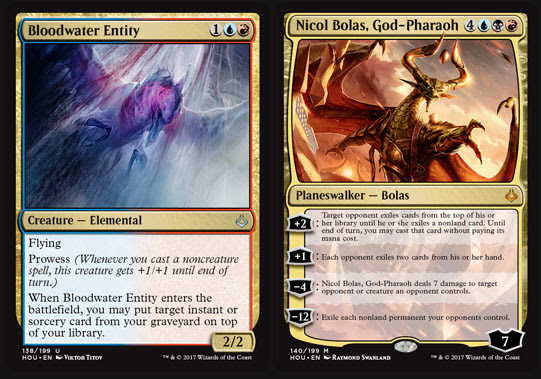 Bloodwater Entity: Useful, very useful. Prowess rocks. I want to flicker it to return more than one instant or sorcery.
Nicol Bolas, God-Pharaoh: The original Nicol Bolas, Planeswalker costs one more mana: 4UBBR
+3: Destroy target noncreature permanent.
−2: Gain control of target creature.
−9: Nicol Bolas, Planeswalker deals 7 damage to target player. That player discards seven cards, then sacrifices seven permanents.
This one reads:
+2: Target opponent exiles cards from the top of his or her library until he or she exiles a nonland card. Until end of turn, you may play that card without paying its mana cost.
+1: Each opponent exiles two cards from his or her hand.
-4: Nicol Bola, God-Pharaoh deals 7 damage to target opponent or creature an opponent controls.
-12: Exile each nonland permanent your opponents control.
Both are game enders if allowed to drop on the board. Both are very difficult to remove and ultimate easily. 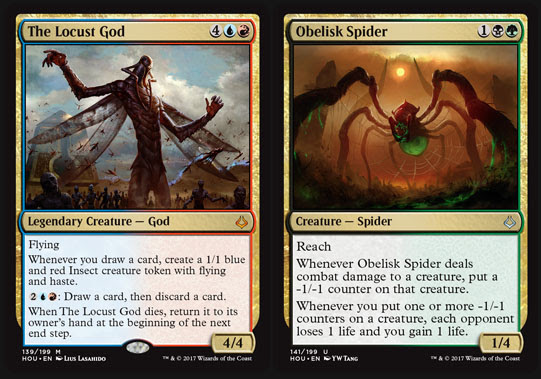 The Locust God: a little on the heavy side, still very Mythic. It will have to be exiled to be removed as a threat. I would have preferred it at 5 mana CMC, and the card draw also is one more mana than I want it to. It looks like it's battlecruiser-costed.
Obelisk Spider: Love it. Both clauses are awesome. There is a Contagion Engine deck out there waiting to be made. (6 Artifact When Contagion Engine enters the battlefield, put a -1/-1 counter on each creature target player controls. 4, Tap: Proliferate, then proliferate again. (You choose any number of permanents and/or players with counters on them, then give each another counter of a kind already there. Then do it again.)) And there's more! Now I can build a Blood Artist-type deck with -1/-1 counters. 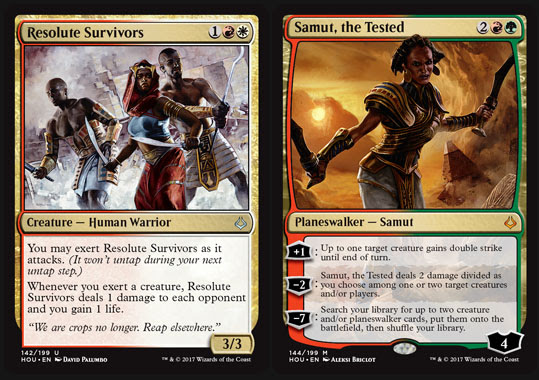 Resolute Survivors: An Exert lord... OK. Tapping a bunch of creatures for small effects is not anyone's idea of a winning strategy, yet some of the Exert creatures in this set read much better than those in Amonkhet. I want to try a deck around this.
Samut, the Tested:
+1: Up to one target creature gains double strike until end of turn.
-2: Samut, the Tested deals 2 damage divided as you choose among one or two target creatures and/or players.
-7: Search your library for up to two creature and/or planeswalker cards, put them onto the battlefield, then shuffle your library.
It's a four drop, and that means that there can be some fat blockers on the board by the time it lands. That to me means that the +1 isn't that great. Sometimes you will be attacking with double strike against some fat blocker. The -2 is also unremarkable. The -7 is really good, that's a double tutor effect and it can be any creature or any planeswalker. Also, it's a fast clock to the ultimate, and if I ever play it, that's where I plan to go: straight to ultimate. 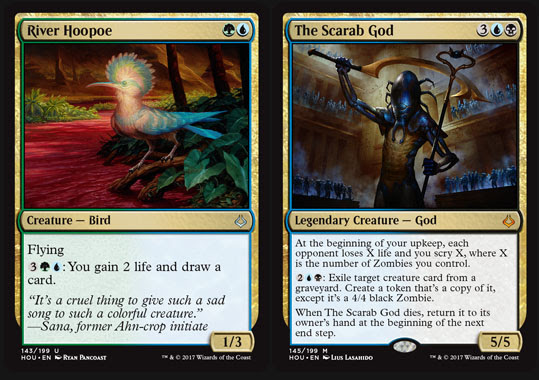 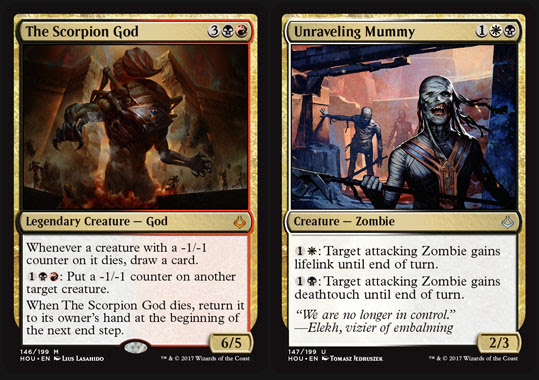 The Scorpion God: Another awesome card. The Gods in this set are better cards than the Gods in Amonkhet. They lose indestructible, and they gain playability. In a creature-heavy standard, the card draw from this is insane.
Unraveling Mummy: Solid. Another low cast Zombie for the White/Black Zombie deck. I need it. 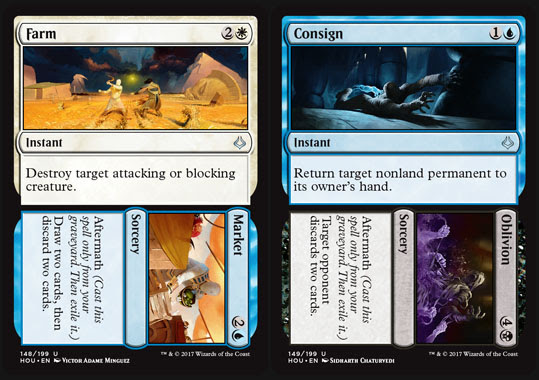 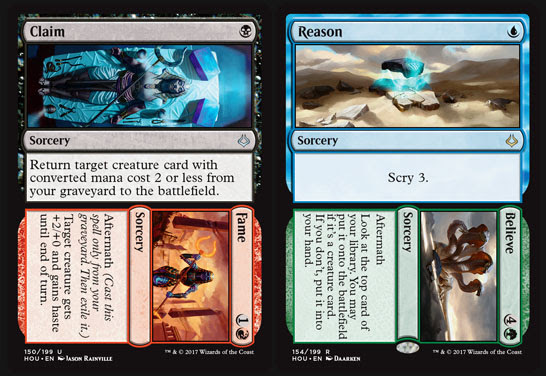 Claim//Fame: This one is actually well-costed all around.
Reason//Believe: Very good all around too. The Aftermath part can lead to some insane plays. 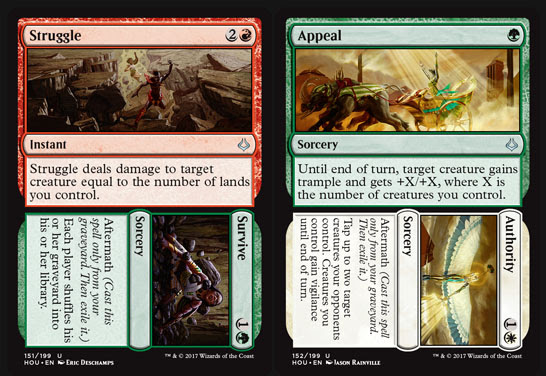 Struggle//Survive: The main effect is really good. The Aftermath effect helps both players except for a matchup against Reanimator.
Appeal//Authority: Both are great effects and well costed. What's not to like! 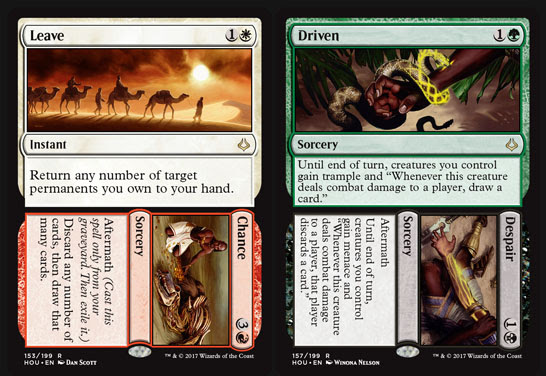 Leave//Chance: Reads like a super-versatile card. In an Enters the Battlefield deck, every time you play this, you can score big. You can replace duds in your hand with Aftermath too... recycle all your late game dead draws for four mana... I will take it.
Driven//Despair: Yeah...this is super good. I love it. Both effects are cheap, and both can yield a lot. I would pack all the creature removal in the format and in these two colors and go to town. 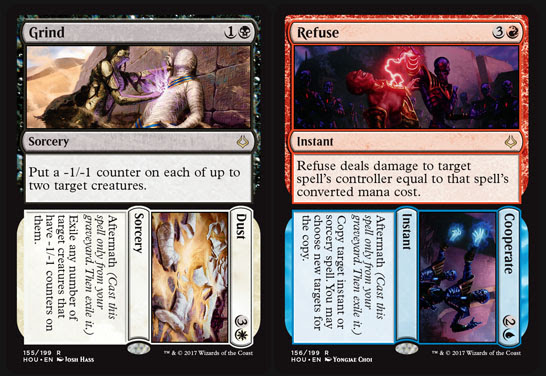 Grind//Dust: Very good. I would place -1/-1 counters with other effects as well and turn the Aftermath effect into a board wipe.
Refuse//Cooperate: A little heavy, yet beats face. The Aftermath I think is the better half since you can copy your own spell, or your opponent's spell.