I have run across a few cool cards. 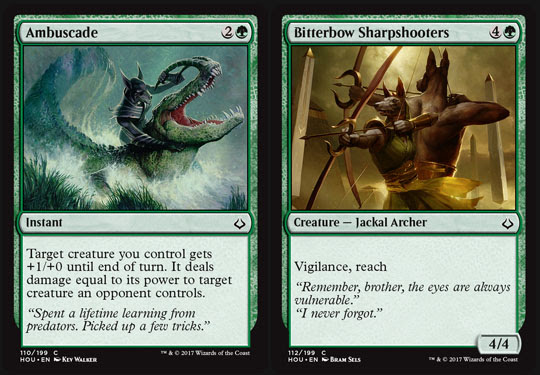 Ambuscade: That's cool. I am assuming that it deals two types of damage, and if so, it can take out two creatures.
Bitterbow Sharpshooters: Solid in Limited. Reach is good against flyers, and Vigilance never hurts. 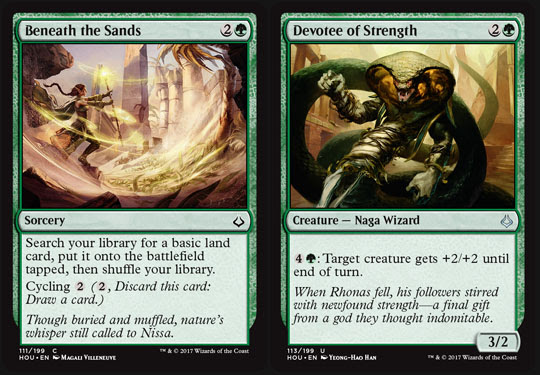 Beneath the Sands: A little heavy for the extra land, yet in Limited, it may be needed. Cycling is good on it because you may not need the land.
Devotee of Strength: Seven mana for a 5/4 isn't great, yet in Green, possibly with a lot of mana not being used late game. 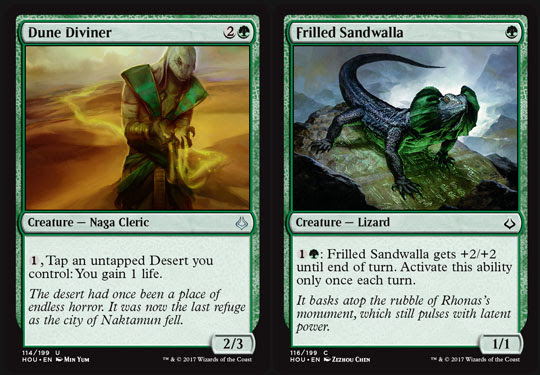 Dune Diviner: Good to trigger life gain for some benefit. The effect would be really good in White.
Frilled Sandwalla: That's some versatility. I like it a lot. It will probably go in every deck with Green I play. 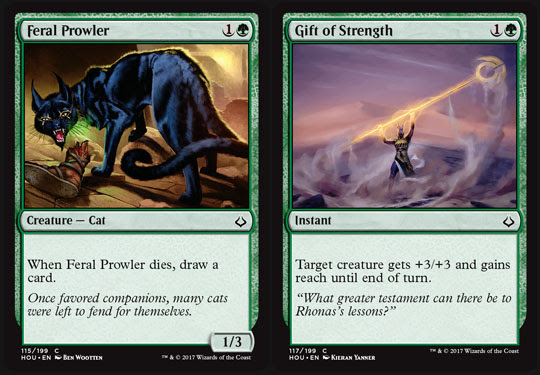 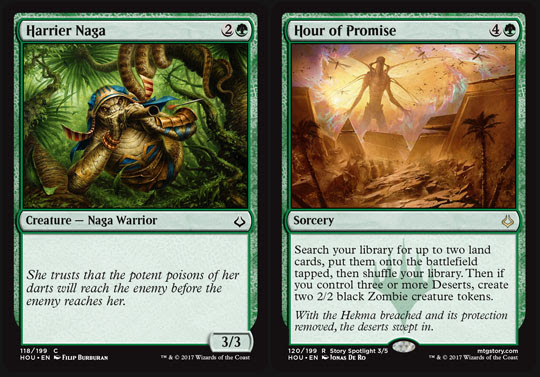 Harrier Naga: When the 'vanilla matters' cards are finally printed, it's going to be a lot of fun.
Hour of Promise: Solid. I need to do a count for the 'Deserts matter' cards. 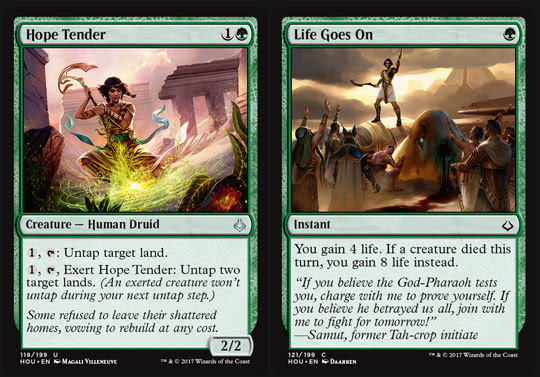 Hope Tender: The additional mana for the tap effect is battlecruiser costing. It seems solid in Standard. Exerting a bear is fine for two untapped lands to do something else.
Life Goes On: These cards never work out. Instead of gaining life, I want to be dealing damage. 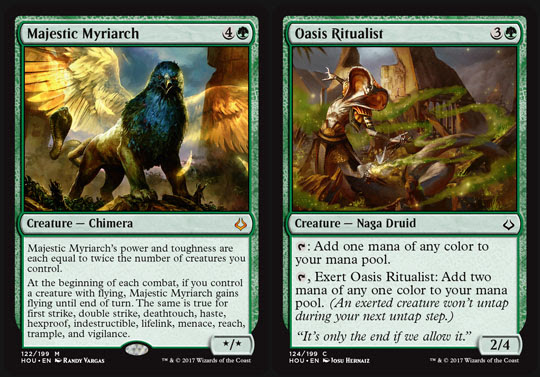 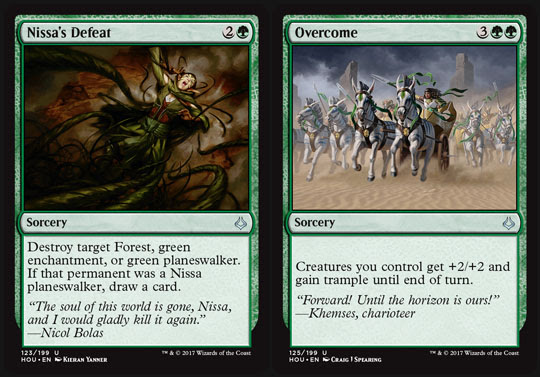 Nissa's Defeat: Like the others in the cycle, good in the sideboard. There aren't any Nissas in use in any of the eternal formats.
Overcome: Compare to Overrun (2GGG Sorcery Creatures you control get +3/+3 and gain trample until end of turn.) Should have been titled Overcost. 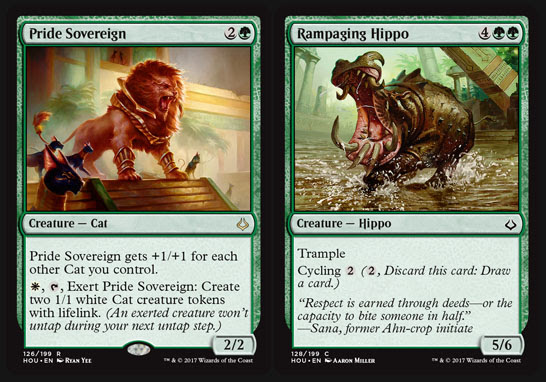 Pride Sovereign: I like this one a lot. It belongs in a casual Modern Cat deck. The White costing cost is accurate to this archetype since most of the good Cat cards are in White.
Rampaging Rhino: Limited. 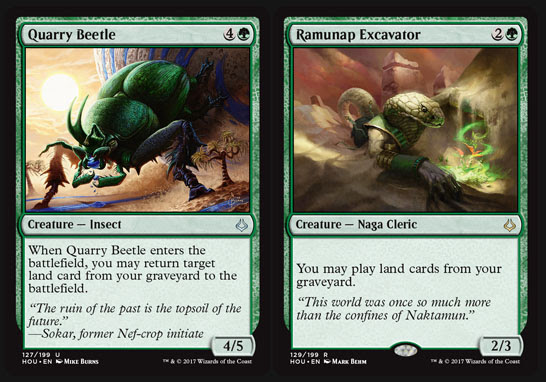 Quarry Beetle: It would be amazing at a lower casting cost. It enters too late for the extra lands to make much of a difference.
Ramunap Excavator: the most amazing card in this set by a very wide margin. This is only the second card in all of Magic to have this effect. The first one is Crucible of Worlds, which was a community-contributed design for Tenth Edition (3 Artifact You may play land cards from your graveyard.) Never get mana-screwed in a game... I can live with that. 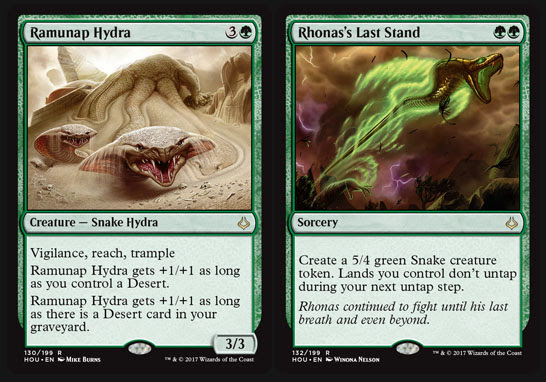 Ramunap Hydra: It does not explode like other Hydras. It won't get bigger than a 5/5, which is OK. The Desert-themed deck is casual all-the-way.
Rhona's Last Stand: Another cool design in the 'tapped for next turn' cycle. This cycle is a tame version of the pact cycle from Future Sight. You give up doing much the next turn in order to do something impactful this turn. 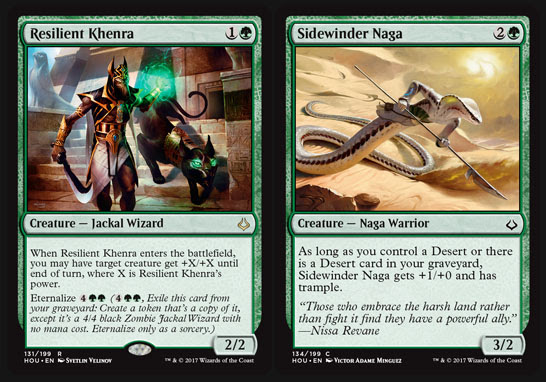 Resilient Khenra: It's solid. The bump is until end of turn only and Eternalize is a great late game bonus. 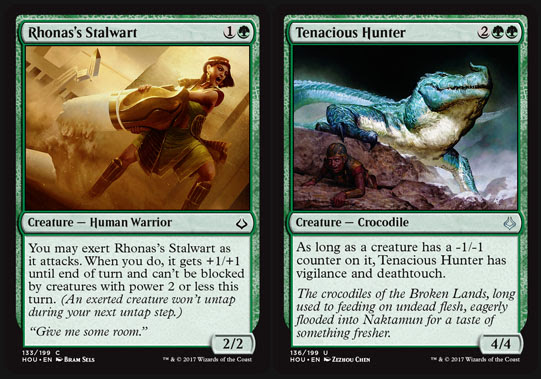 Rhonas's Stalwart: Limited.
Tenacious Hunter: Not bad. There are plenty of -1/-1 themed cards in Amonkhet. It belongs in Black/Green for sure. 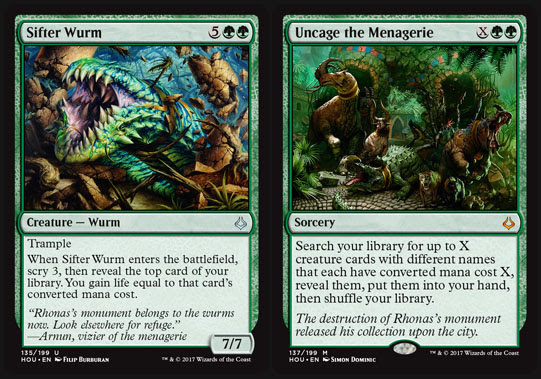 Sifter Wurm: Fun Timmy creature.
Uncage the Menagerie: this one is going to get quite the EDH following. It's much harder to maximize X in a Constructed than it is in EDH. However, if you choose to dig up a bunch of three or four mana critters, you can profit from this in Constructed.
Posted by Rubiera