I went to my local Target this morning at 8:30 AM and all of the fat packs, nine of the ten intro packs, and most of the loose packs had been sold. Usually the release day stock is a few fat packs, ten intro packs (a single box) and maybe 20 to 30 loose boosters. Luckily I pre-ordered a fat pack! I don't think I will ever see a BFZ fat pack at a Walmart or a Target.

Battle for Zendikar has two selling gimmicks: the Expeditions-full art fetch lands especially, and the full art lands. The Expeditions gimmick is the one that I find worrisome for the future of Magic. So many more packs will be opened than will be used to play with or to collect at a reasonable level, that there will likely be a large over-supply of these cards for years to come. I was not a player when Zendikar came out, and even though that set had the prerelease treasures gimmick and the full art lands gimmick, the number of players back then had to be smaller. There was only so much extra pack cracking that could have happened. It is an open question now if with a larger player base and a gimmick (the Expeditions) will result in a mountain of opened product solely for the purpose of opening Expeditions. 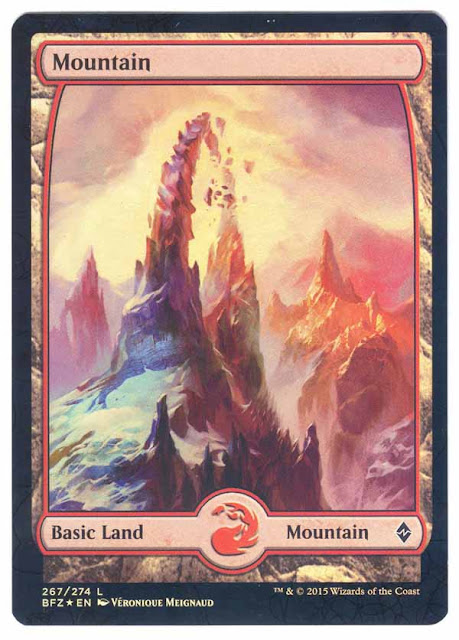 Of course, there is always a silver lining. If the set turns out to be very playable, which it sure looks like it is, then all of the cards will have an over-supply and a correspondingly lower cost. That is a good thing.

And finally, its an OK gimmick if I end up pulling an Expedition...
Posted by Rubiera