This deck has turned to be a lot more fun than I expected. Here is the first draft. 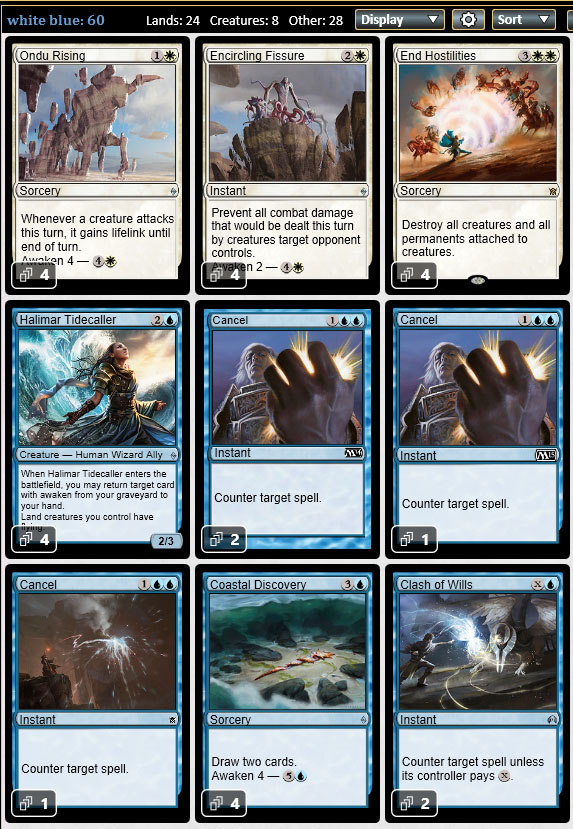 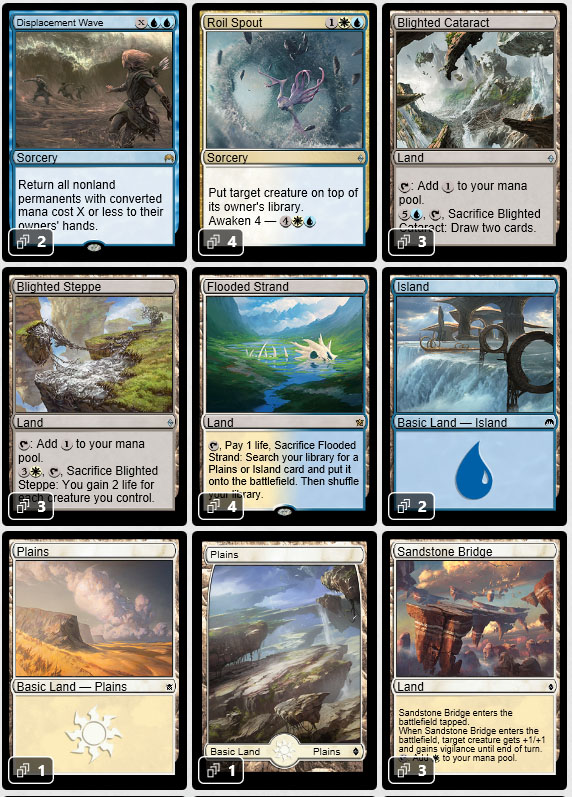 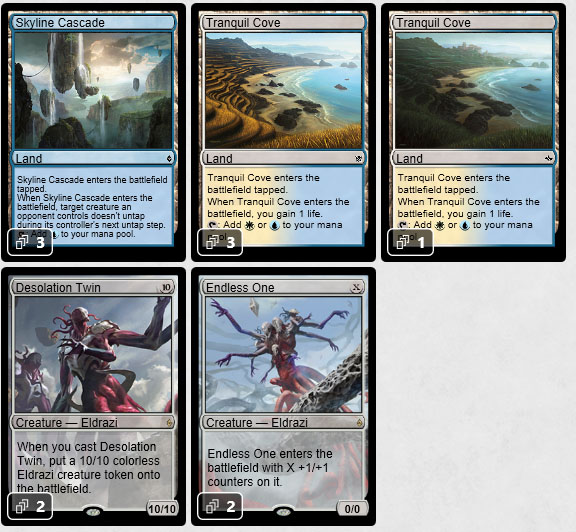 The deck wants to use Planar Outburst because it is a one sided Wrath that does not remove your own land creatures, but I think Awaken just does not have enough punch with just BFZ. If there are more Awaken cards in Oath of the Gatewatch, we could have a more powerful deck. I am very impressed with Halimar Tidecaller. It is the Snapcaster Mage of Awaken. Coastal Discover is effectively a 6 drop 4/4 that gains you two cards as an Enters the Battlefield (ETB) ability. Here is the deck after some changes, especially to the manabase to weed out cards that are meant for creature-heavy decks. 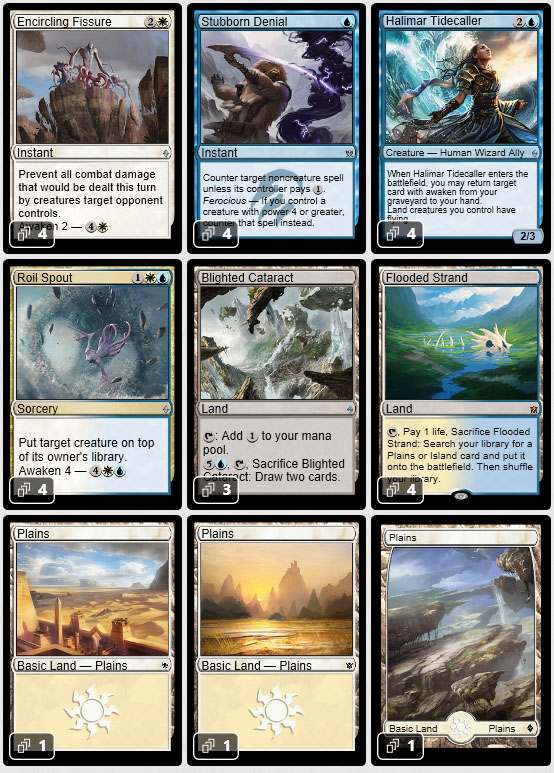 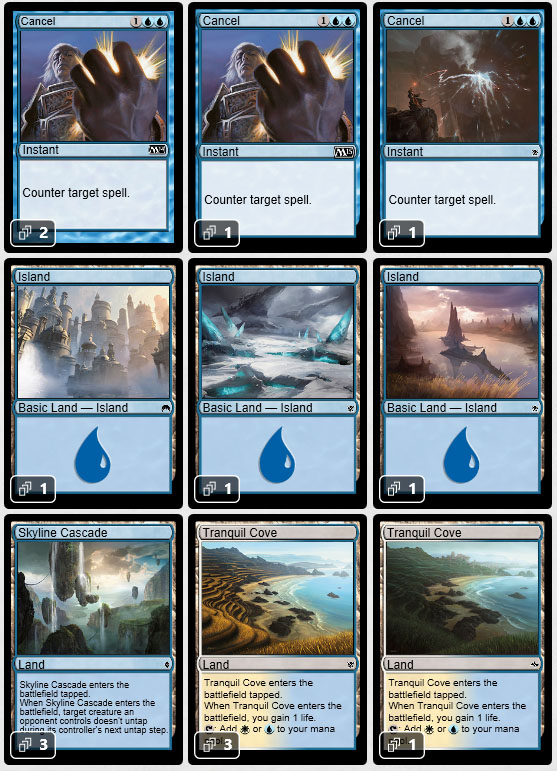 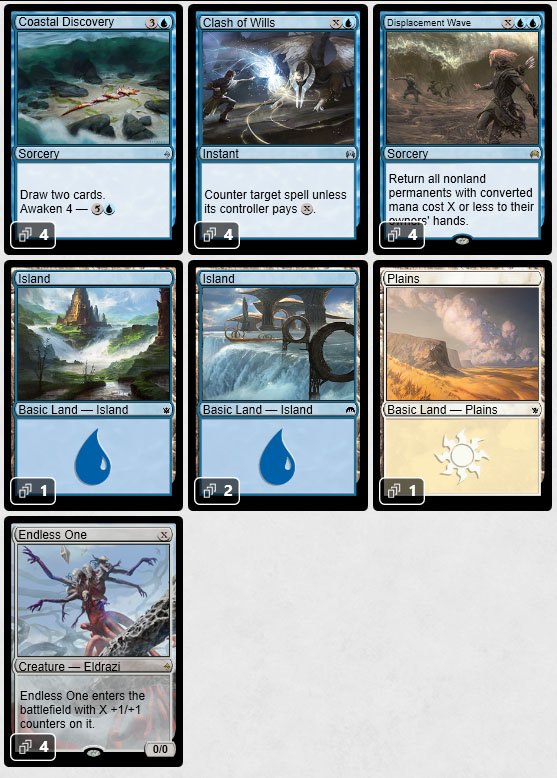 Here are two games I won. In the first one I got to cast Roil Spout from my hand and after a graveyard recovery using Halimar Tidecaller. I must have sent my opponent's Endless One back like six or seven times. 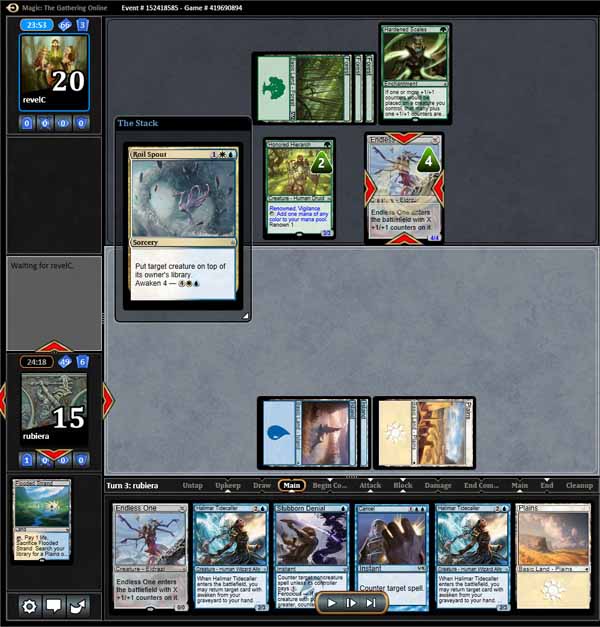 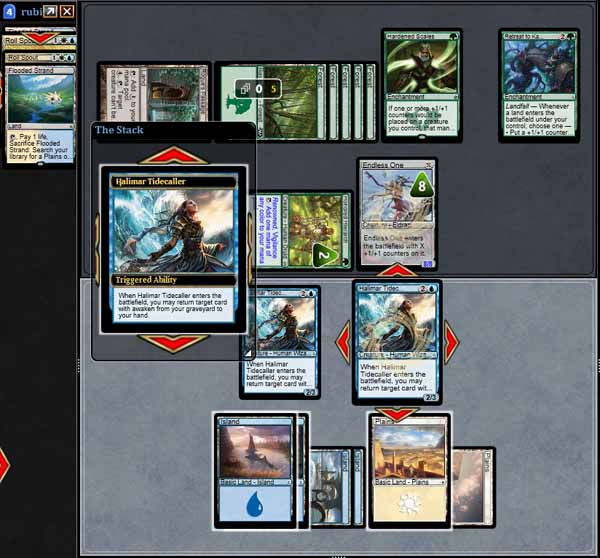 Displacement Wave was awesome against my opponent since X=0 for Endless One. My opponent gave up at some point when it became obvious that I had the win. 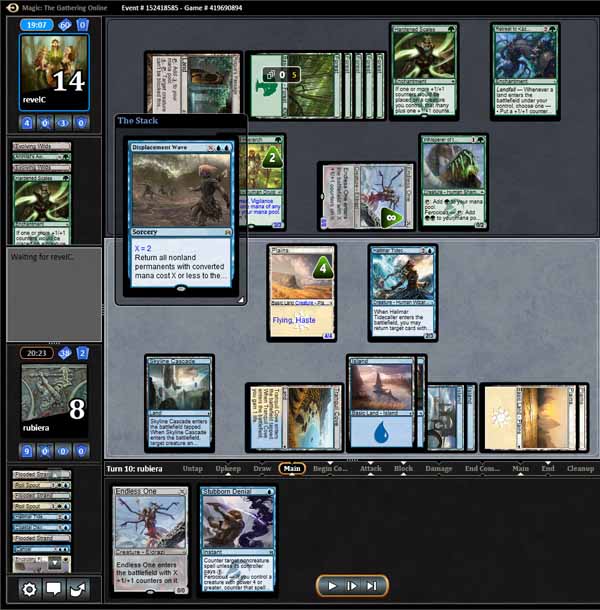 In this second game I wore out a fast Red/Green Landfall deck. I used Endless One as a chump blocker to exhaust my opponent. My creature lands are my beaters in this deck. 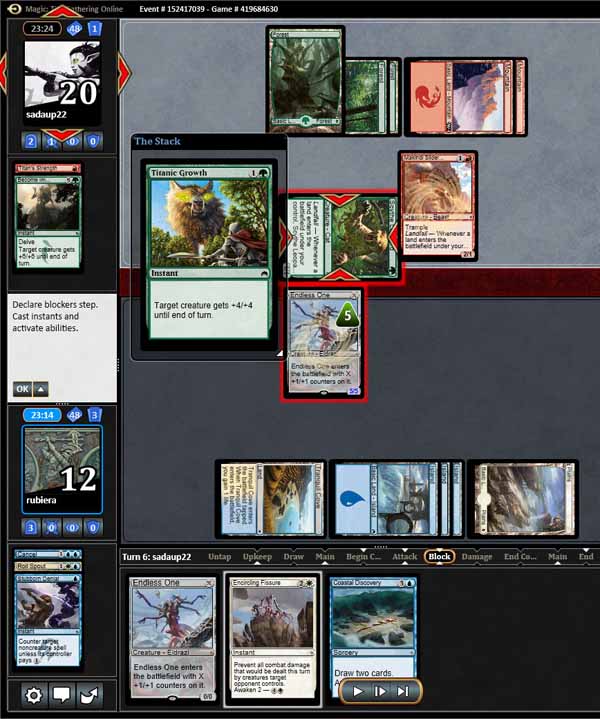 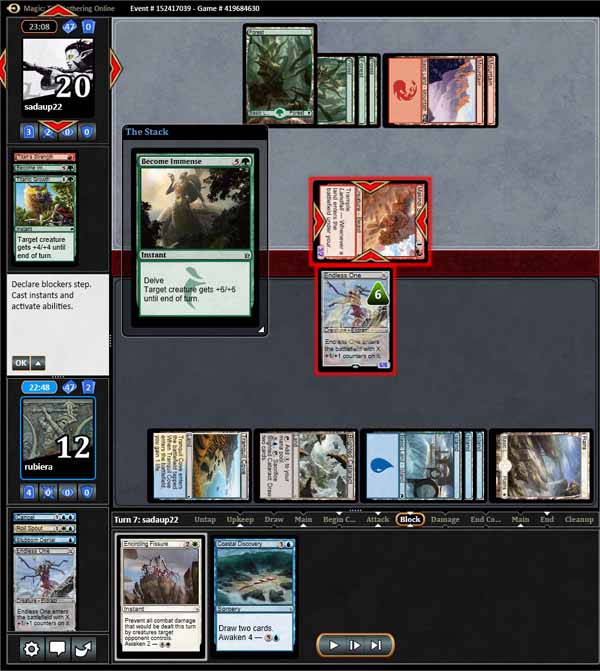 An exhausted opponent gives up, a common event when playing White/Blue. 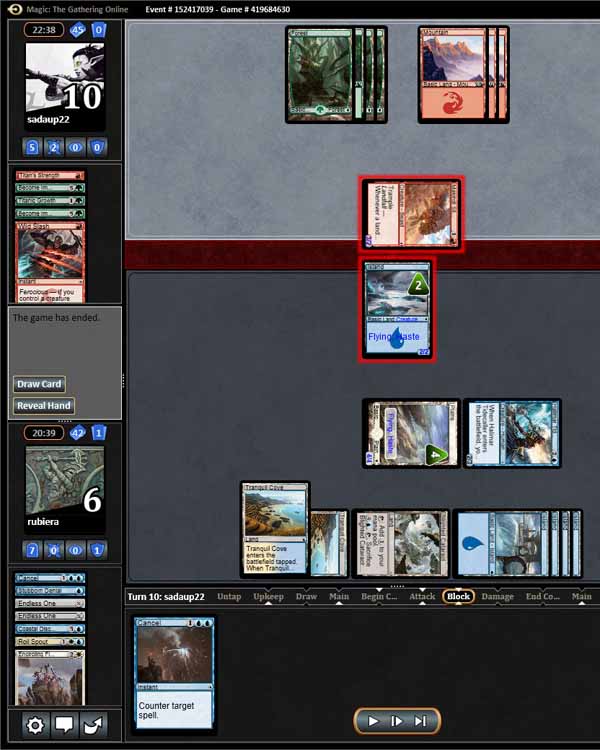 Here is a very instructive loss. I wish I was playing my opponent's deck. It uses the sacrifice to draw a card trigger of Smothering Abomination as its key trigger. 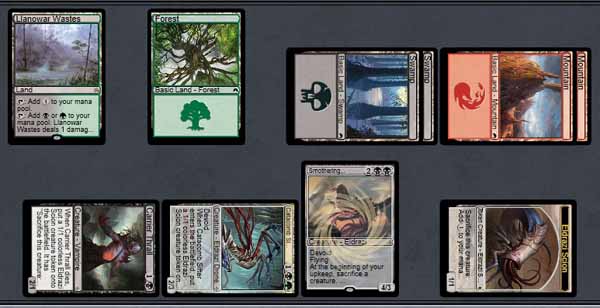 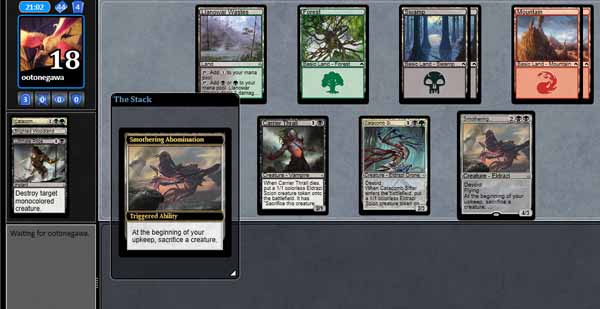 Scion tokens from Carrier Thrulls and Scry 1 from Catacomb Sifter. 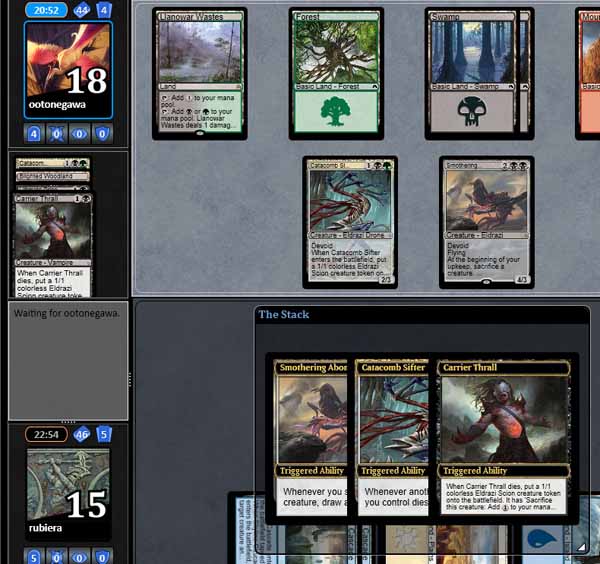 And scion tokens from Eyeless Watcher.

With Zulaport Cutthroat the combos just go off. Just like with Blood Artist, the cycle is a very successful one. 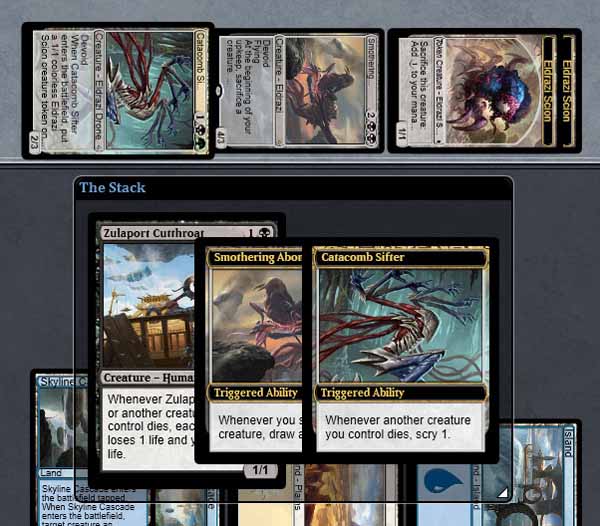 The tokens yield mana, a key enabler to the combo. 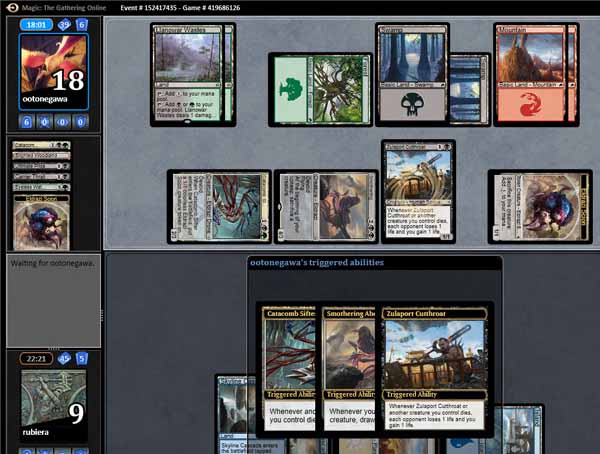 Gain one life and lose one life slowly drains me. 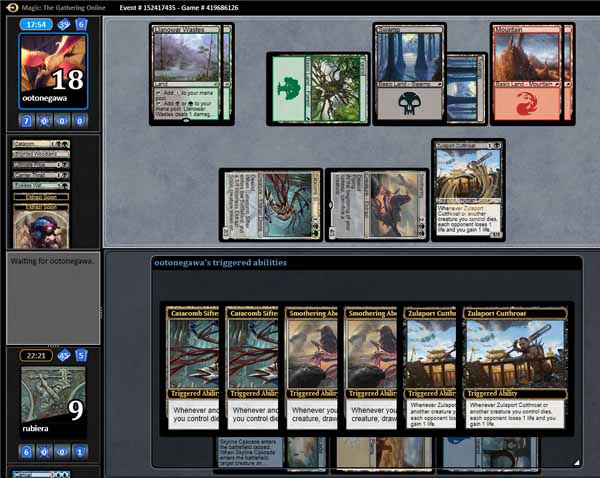 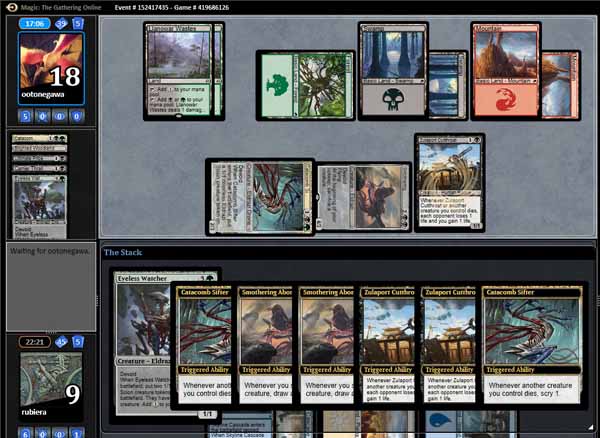 Mortuary Mire gets Eyeless Watcher (what a great name!) out of the graveyard. 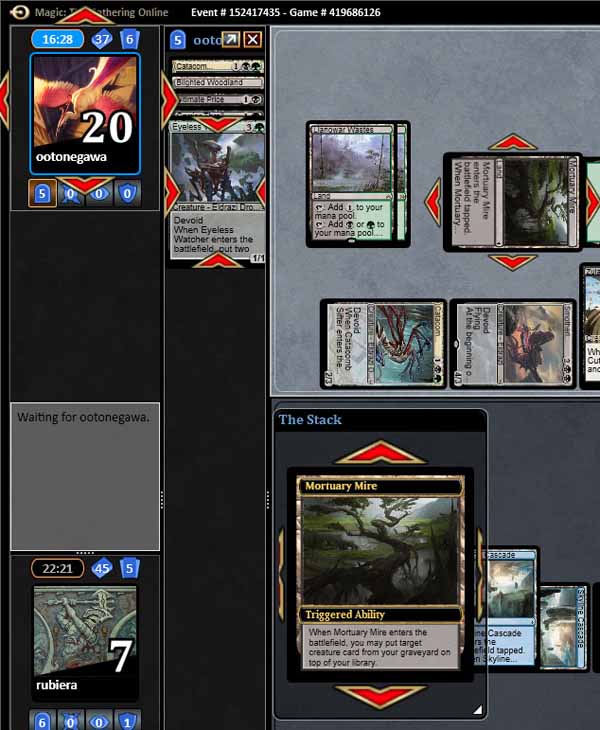 I try to get Somethering Abomination off the board to no avail. 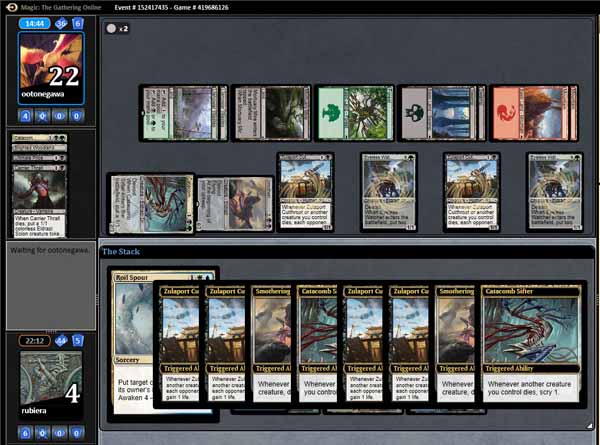