I have had some fun with this deck, but only when I am playing someone who does not know my deck. Once I lose the element of surprise, as is the case of a second and third game in a match, this deck is very easy to figure out and beat. I have a string of matches in which every single time I won the first game and lost the last two.

I don't know what Wizards was thinking when they designed Battle for Zendikar and when they came up with the 5 to 6 set Standard... with this first set they don't seem to be getting it right. BFZ is even slower than Theros minus something as fun as Devotion. These baby Eldrazi seem incomplete and have zero synergy with all of the other sets in Standard. What's more, the red baby Eldrazi are aweful and missing a one drop. I hope the missing cards are in Oath of the Gatewatch. If this pattern continues, the first set in a block will be incomplete, and Standard will be fun again only when the two sets in a specific block are in. That means that the January and July Standards will be fun, and the October and May Standards will be miserable. This Standard is miserable. All BFZ has added is Guideon, Drana, and a pretty good manabase. What's more, after I am done running through the BFZ cards to figure out how they work, the decks that will be the most fun will likely have no BFZ creatures or spells, just the manabase. And don't even get me talking about Origins flip Jace!

Needless to say, you won't need to worry about the mirror for this deck, since such few decks are featuring these cards. Here is the original draft.

November 22, 2015 Update: I do occasionally play against the mirror and BFZ Standard isn't quite as miserable as it seemed in the beginning, but it is still true that this set is a considerable power down, and that decks that have no BFZ cards save for a few utility cards or Gideon do well. BFZ has had a very small impact save for the manabase. 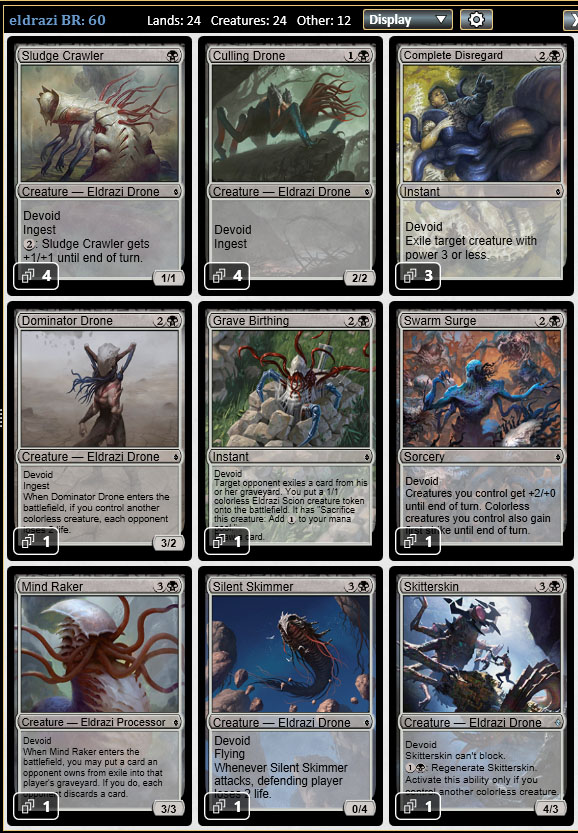 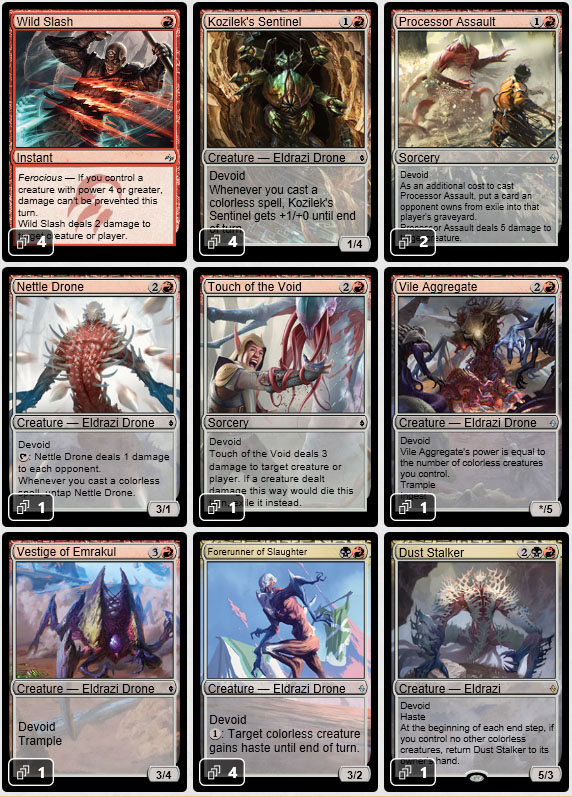 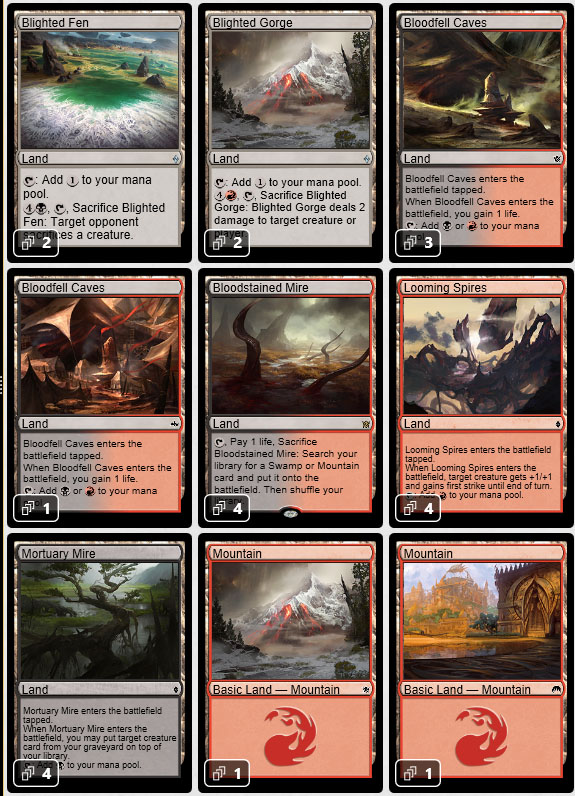 And here is the final deck. Notice that I had to add good stuff from previous sets to make it less weak. 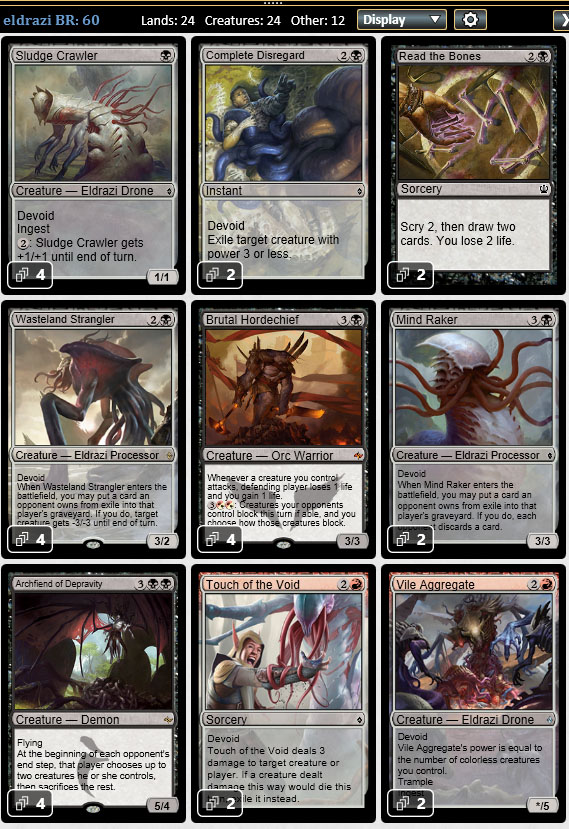 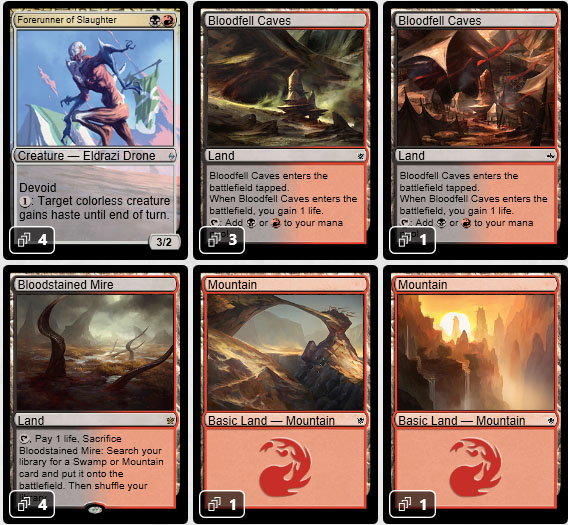 Here is the sideboard. Here are a few games. The first one in the match is always a win, and then any of the other two are a loss. Forerunner of Slaughter is really good and a ton of fun. Its missing a good one drop partner. 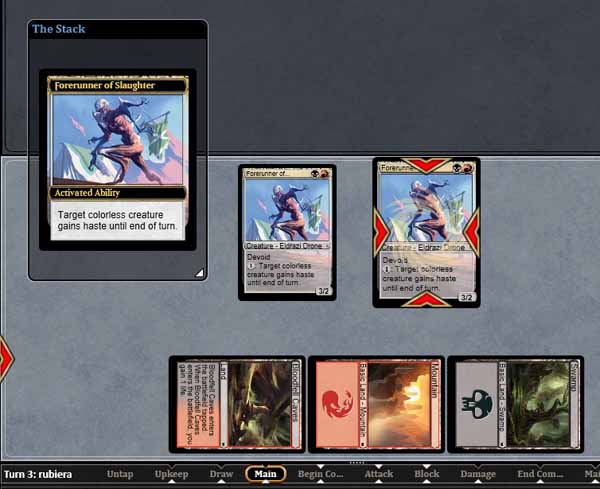 Here I neutralize the second Siege Rhino and use Brutal Hordechief to make it block my one drop. 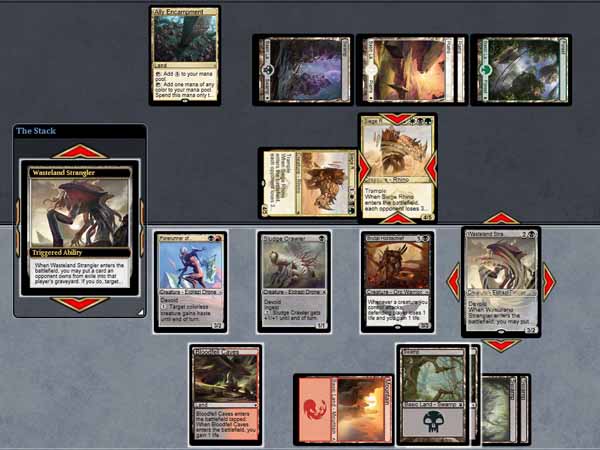 And then I swing for the win. 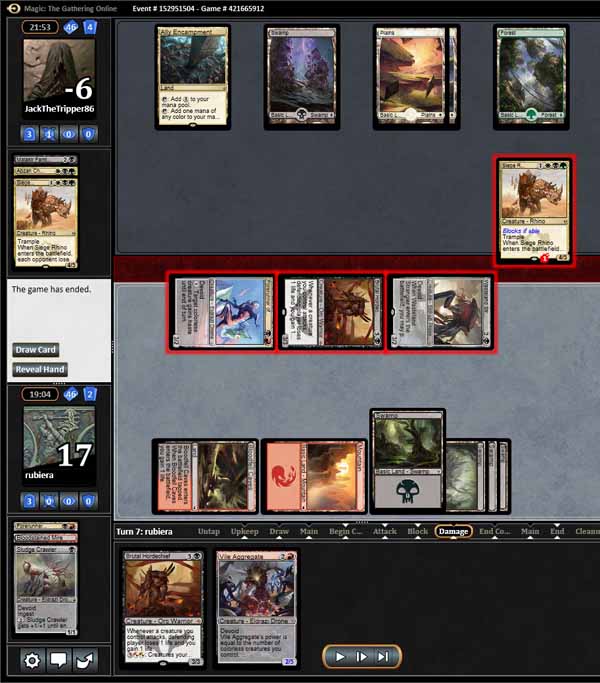 In the second game I get board wiped. 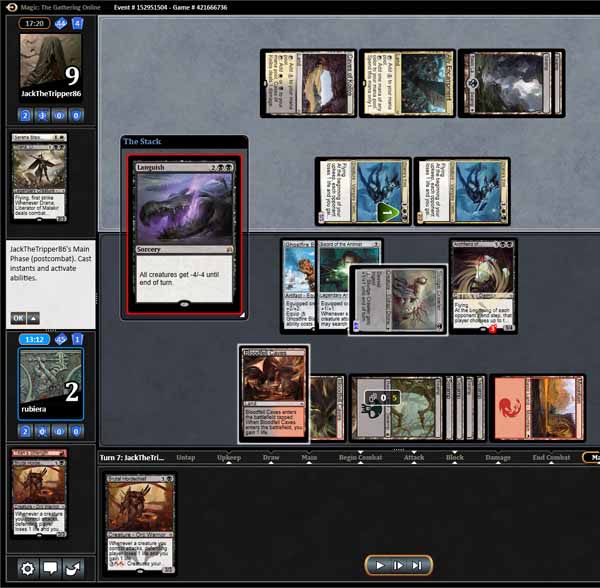 And since I am running low on life my opponent can just drop life drain critters... 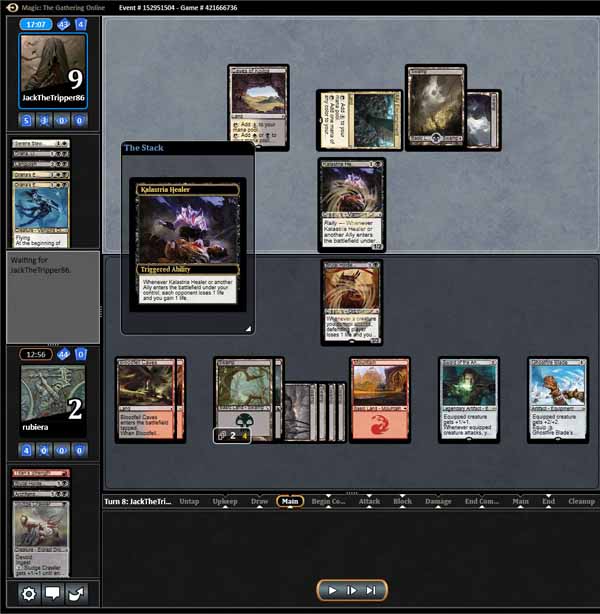 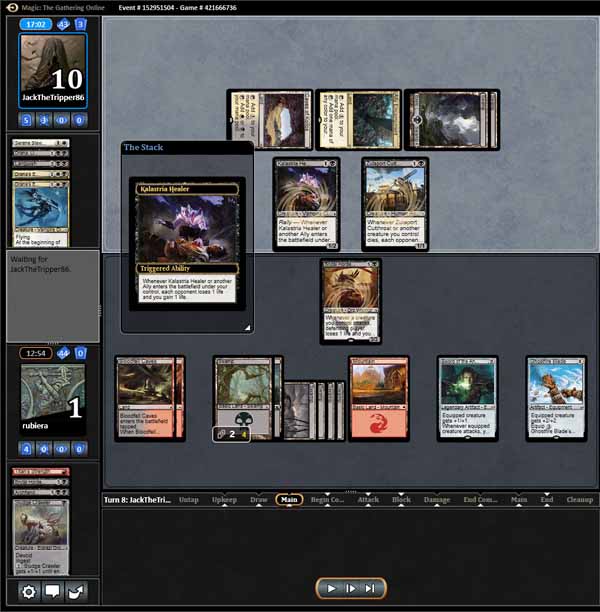 Here I have a great board position against Warriors. 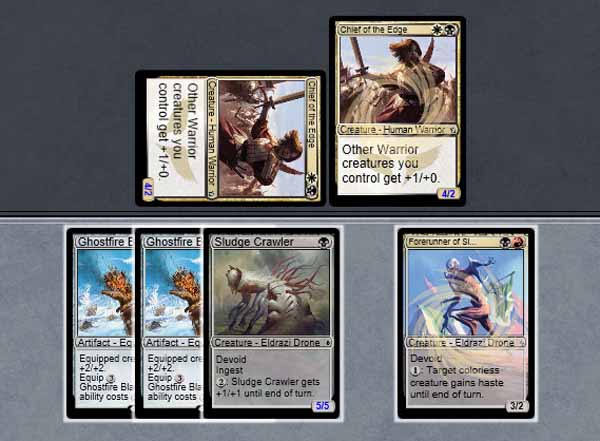 And in the second game I get board wiped. 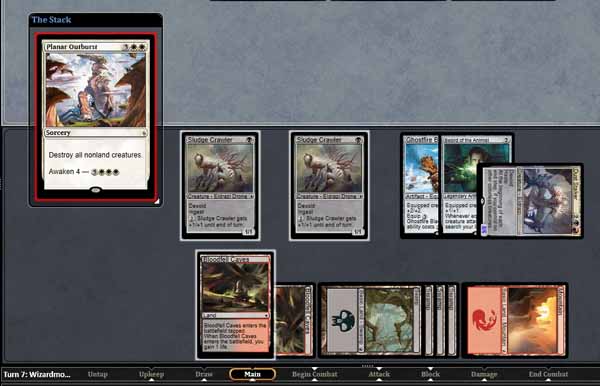 Here I can swing at will in the first game. 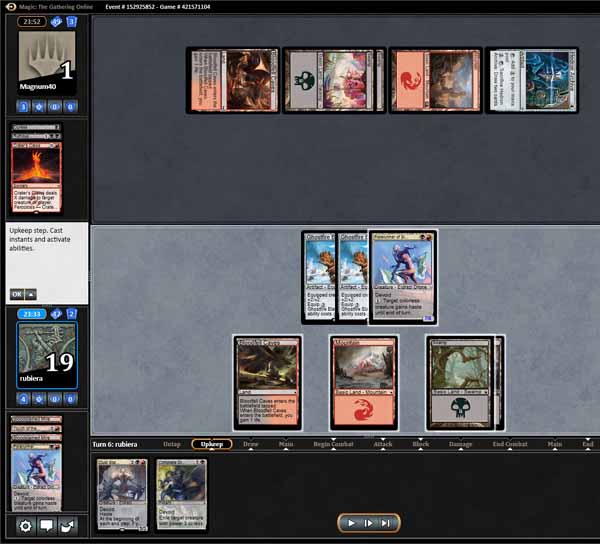 ...and I get mana screwed in the second one. 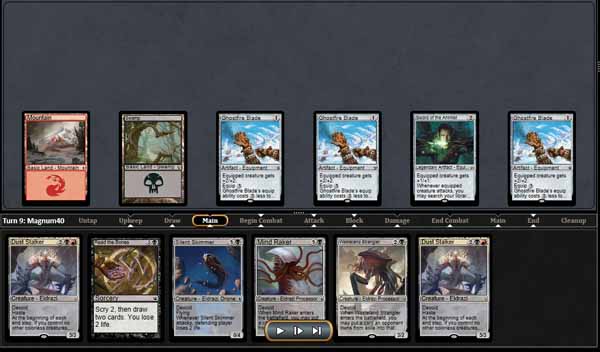 Here is a later game in a match in which I lose to dragons after a board wipe. 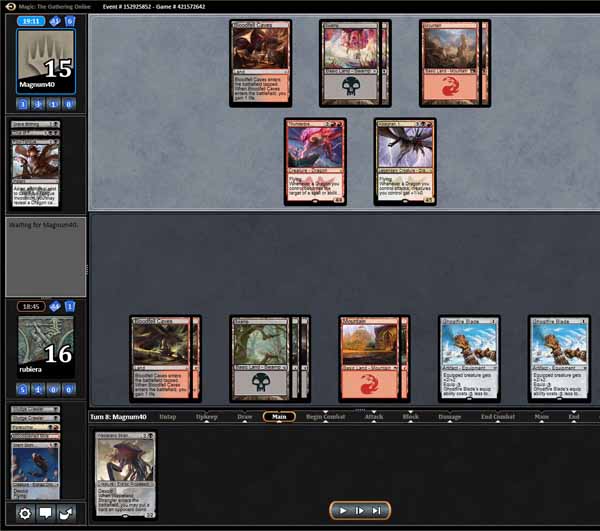