I am almost done with this marathon review. This is the last installment. By now, my buying rank has Vampires first, Cats second, Wizards third, and Dragons last. They are all really good, though, and reviews and rankings can be very subjective. 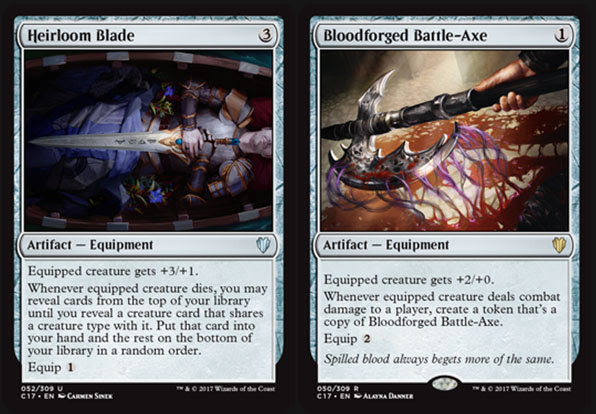 Heirloom Blade [Cat deck]: That's a very useful equipment. It has a low equip cost, is aggressive, and lets you replace a lots creature.
Bloodforged Battle-Axe [Cat deck]: Another really strong equipment. It could be the very first equipment that creates a copy of itself. What if you are able to create three or four copies? It has a low equip cost. This is an unique design. I love it. 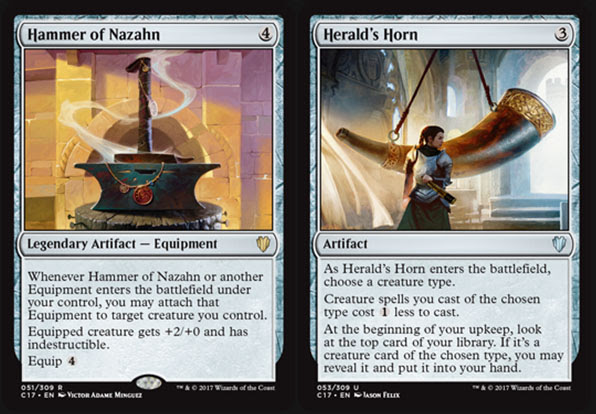 Hammer of Nazahn [Cat deck]: It's legendary. I don't understand why it names itself since when you cast a second copy, one of them will have to be destroyed. The lone exception is you play a card that invalidates the legendary rule (I am thinking of Mirror Gallery from Betrayers of Kamigawa).
Herald's Horn [Cat deck]: It can go into any tribal deck. This is the Sol Ring of commander tribal decks. 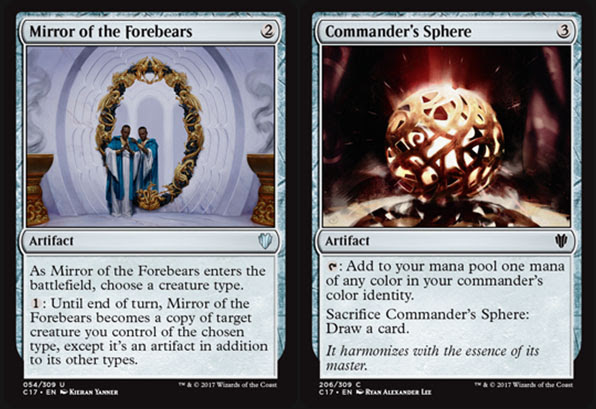 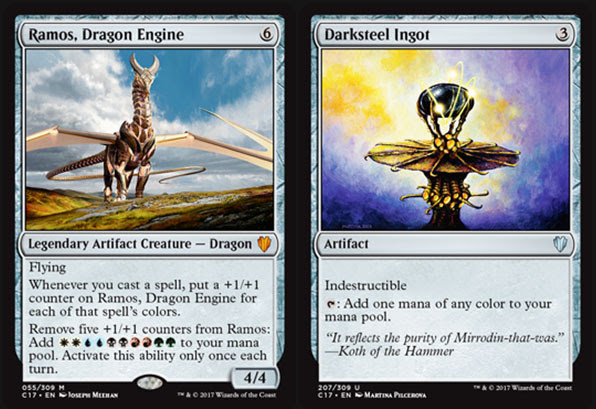 Ramos, Dragon Empire [Dragon Deck]: This is really busted. It sure makes up for the two red junk mythic rares in this deck. You can also switch in ways to add counters, but this deck is already going in too many directions being a five-color deck. The mana from removing five counters should make for some hilarious plays. I think this card alone can sell the dragon deck.
Darksteel Ingot [Dragon Deck]: Great inclusion for stable mana. 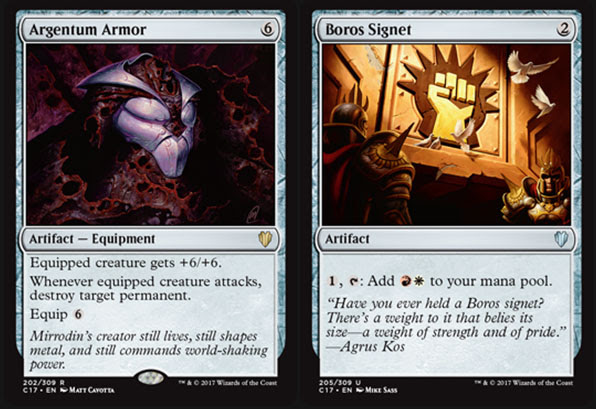 Argentum Armor [Cat deck]: Late game in commander I can see this being really good. At any other time, the six mana equip cost will be a limitation.
Boros Signet [Vampire deck]: Stable mana. 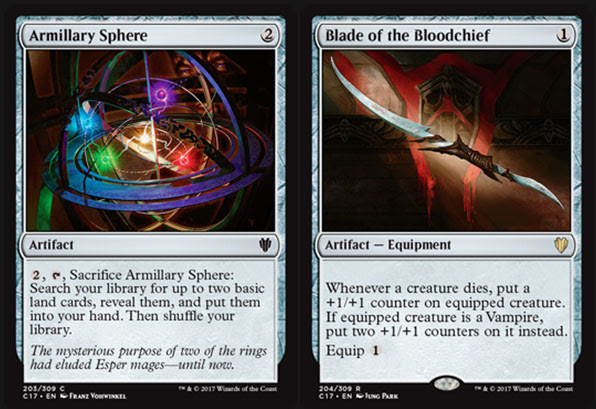 Armillary Sphere [Dragon Deck]: More mana fixing in a five-color deck.
Blade of the Bloodchief [Vampire deck]: You will need to sacrifice for this to work. You can also wait for one of your creatures to be removed to put this on any creature left behind. 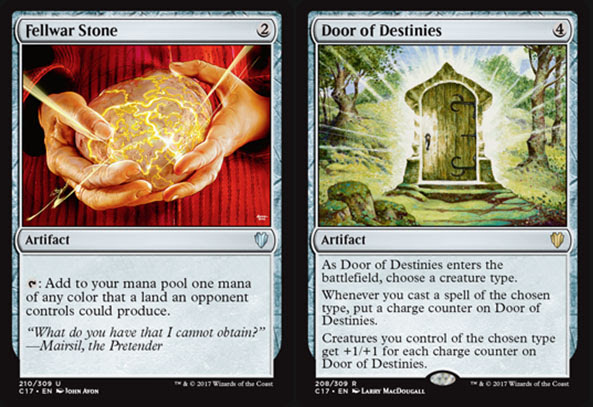 Fellwar Stone [Wizard deck]: It might as well say 'colorless mana' if you are only playing against one or two opponents. Against four or five, you will likely be getting many in any color out of this.
Door to Destinies [Vampire deck]: This must be really good in commander tribal, where four drops are mid-game. 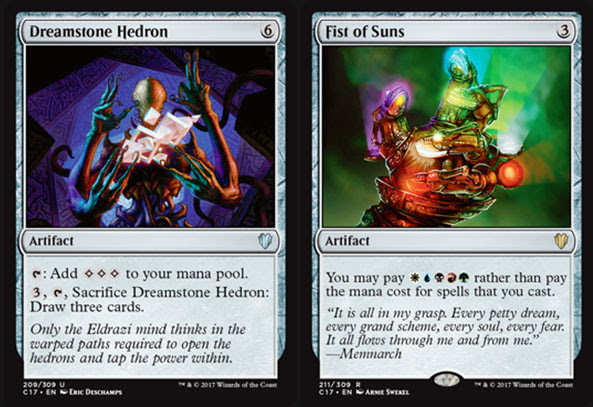 Dreamstone Hedron [Cat deck]: From Rise of the Eldrazi. A late game booster.
Fist of Suns [Dragon Deck]: From Fifth Dawn. Wow, that's one way to cast those big dragons turn 5 or 6. I really want to play this card. 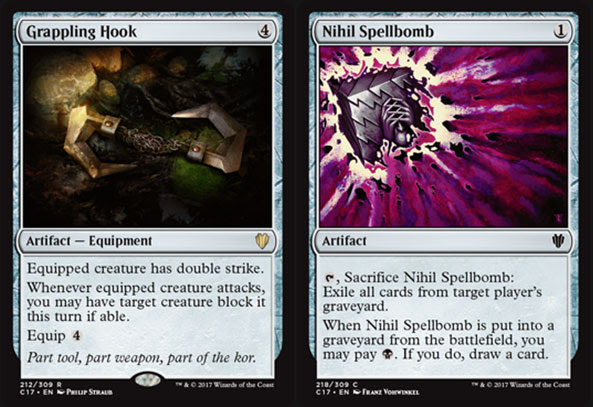 Grappling Hook [Cat deck]: From Zendikar. Great for snipe attacks against smaller critters, or against big critters if it's on one of the cats that is already buffed by other equipment.
Nihil Spellbomb [Dragon Deck]: Easily one of the best commons in requiting black mana in the game. In constructed it is more of a sideboard card, but commander doesn't have a sideboard. 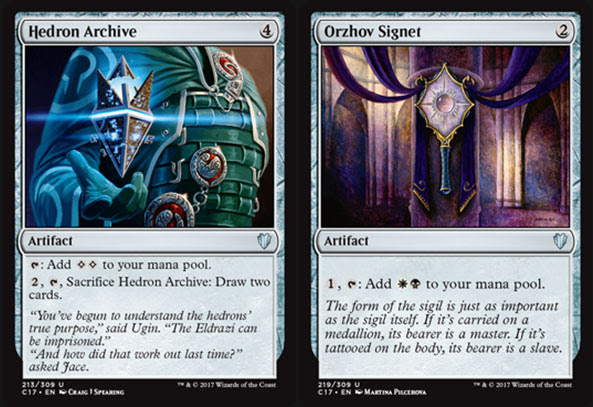 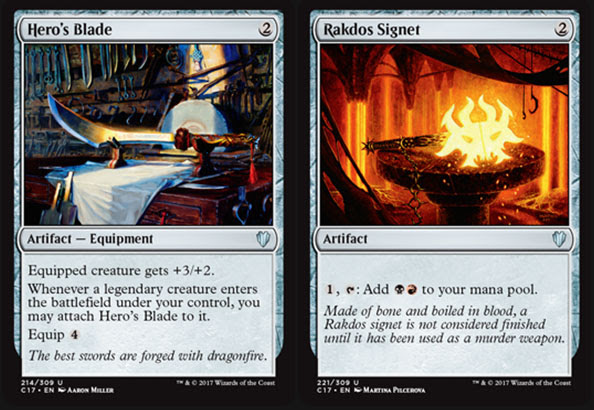 Hero's Blade [Cat deck]: Perfect in commander as a free-equip for a legendary creature. Otherwise a bit heavy of an equip cost, which in commander should not be a problem.
Rakdos Signet [Vampire deck]: Stable mana. 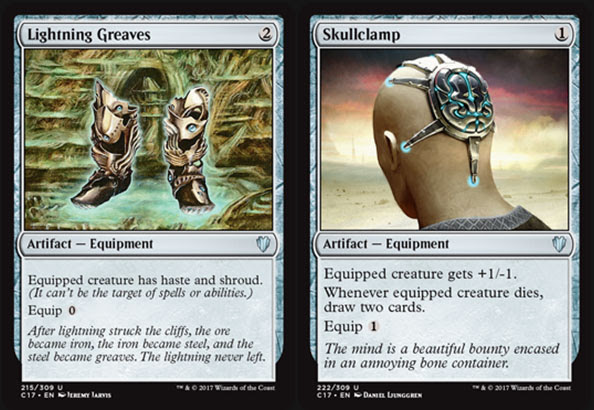 Lightning Greaves [Cat deck]: A great way to protect a cat, and it has zero equip cost. It deserves to be reprinted another zillion times.
Skullclamp [Cat and Vampire decks]: A most broken equipment. Equip it on a 1/1 creature, and immediately draw two cards. Rightfully banned in Modern and Legacy. So busted... 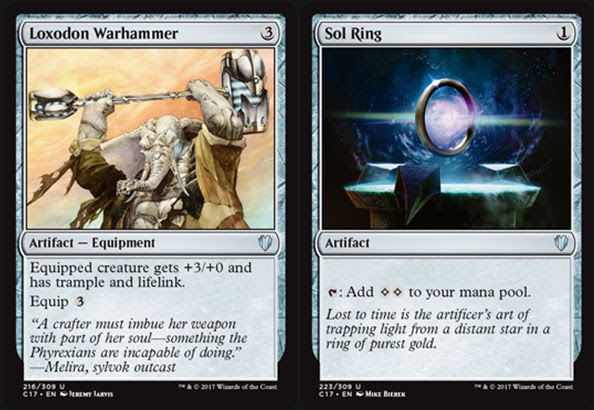 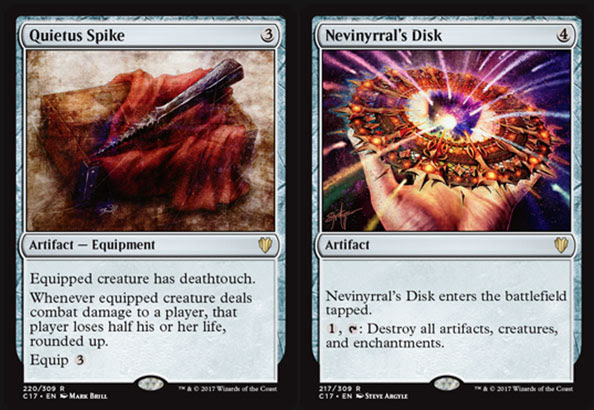 Quietus Spike [Cat deck]: One of my favorite equipment. I have played it online and sometimes players don't read this card... and then they lose half their life to it. It's brutal.
Nevinyrral's Disk [Wizard deck]: Before there was Oblivion Stone, there was this card. It does not say non-land permanents, but it's pretty close in most games. 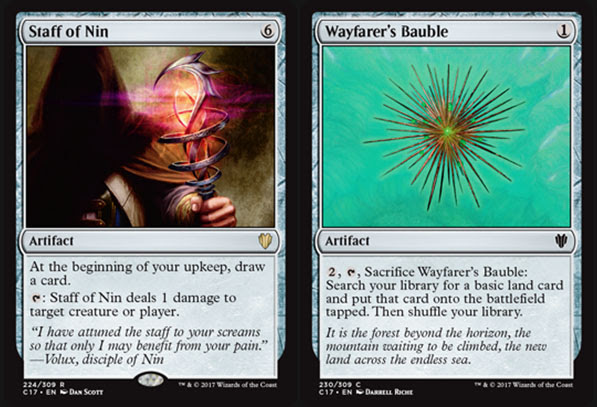 Staff of Nin [Cat deck]: Late game, a great play. It will likely speed up the game for you.
Wayfarer's Bauble [Dragon Deck]: Yet another mana stabilizer in a five-color deck. 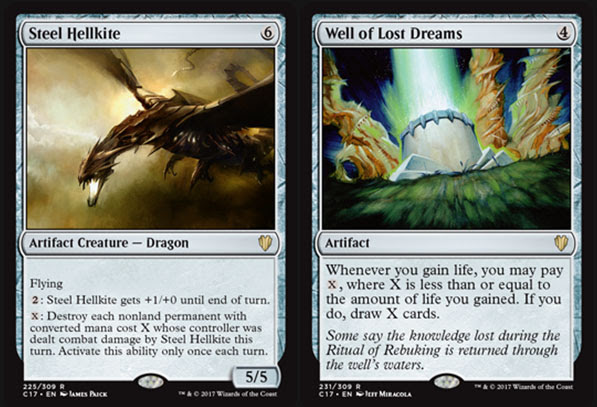 Steel Hellkite [Dragon Deck]: This is one of my favorite creatures of all time, up there with Wurmcoil Engine. The destroy clause can be especially destructive.
Well of Lost Dreams [Vampire deck]: This is a great way to draw many cards. This is another one of those awesome cards that make a commander deck a lot of fun. One of the best inclusions. 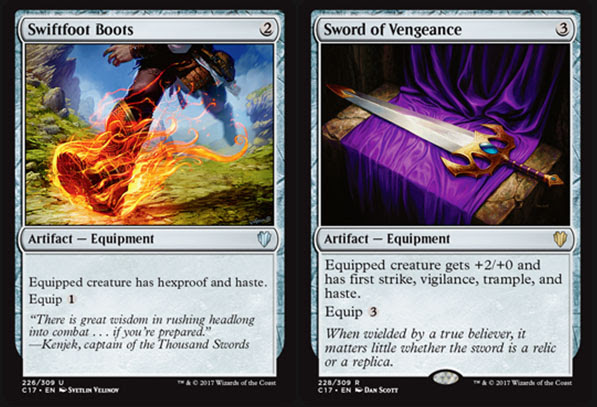 Swiftfoot Boots [Cat deck]: A classic. Needs to be reprinted another zillion times.
Sword of Vengeance [Cat deck]: A great way to make one of your cats almost like Baneslayer Angel (Flying, first strike, lifelink, protection from Demons and from Dragons). 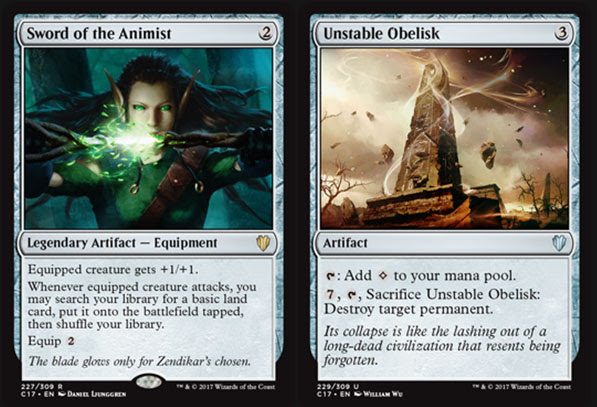 Sword of the Animist [Cat deck]: I love this equipment. I loved it so much in standard that I would sometimes forget that it is legendary. It's just awesome. If you were mana screwed, you no longer will be. It would be a good inclusion in any commander deck.
Unstable Obilisk [Wizard deck]: It can be any permanent. That's good, even at such a high cost, yet Scour from Existence is strictly better at 7 mana and instant speed. 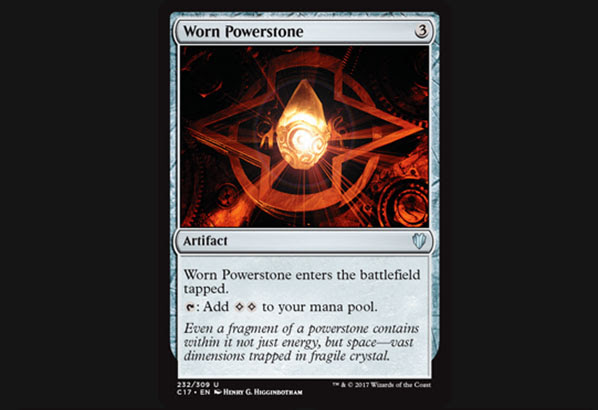 I am not reviewing most of the lands: the tap lands and tri-lands are obvious. 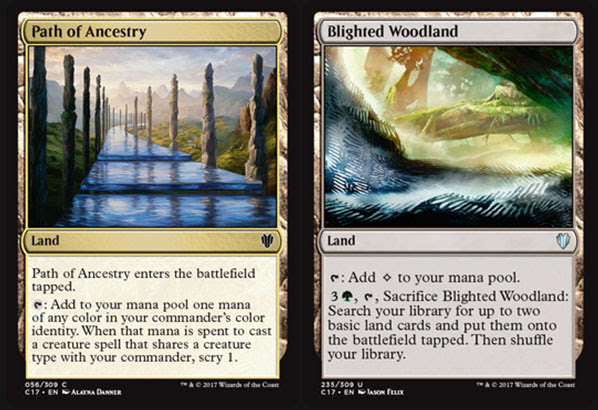 Path of Ancestry [Cat deck]: Not really needed in a two-color deck.
Blighted Woodland [Cat Deck]: I would be switching it out pronto. No one buys commander decks for the lands. 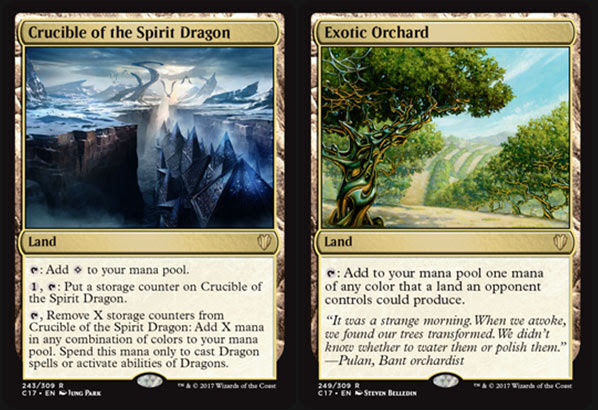 Crucible of the Spirit Dragon [Dragon Deck]: Makes sense to include it in a dragon deck.
Exotic Orchard [Wizard deck]: Same as Fellwar Stone. 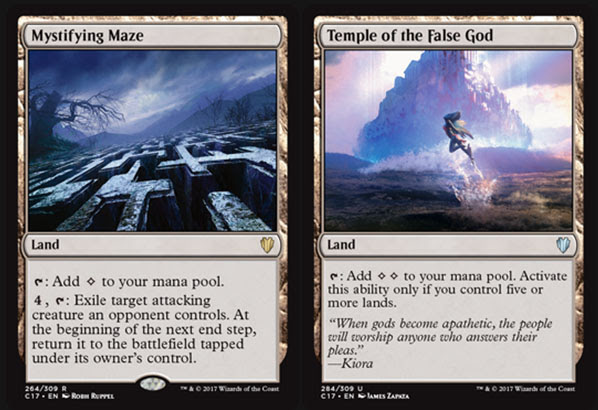 Mystifying Maze [Wizard deck]: Very disruptive. This could very well be the best land in all of these deck.
Temple of the False God [Wizard deck]: Great inclusion. Extra mana late-game to cast all those big spells. 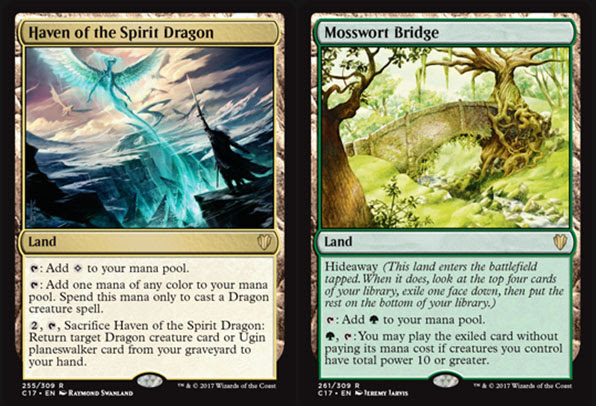 Haven of the Spirit Dragon [Dragon deck]: Makes sense to include it in a dragon deck.
Mosswort Bridge [Cat deck]: That's a cool effect. It should make for fun game play, especially if you get lucky and the card you exiled is a big play. 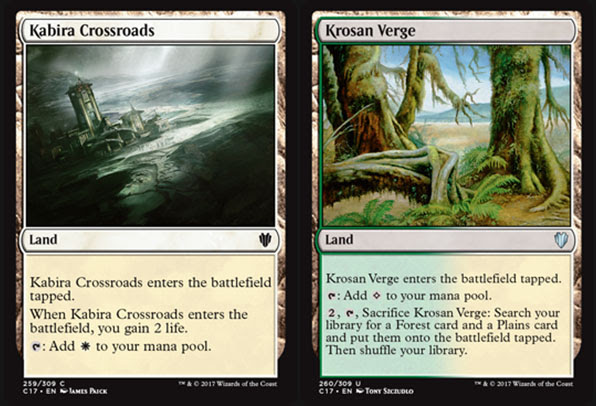 Kabira Crossroads [Vampire deck]: Small life gain. I don't know what this land is doing here.
Krosan Verge [Cat deck]: you sacrifice this and you get two lands? I will do it. Plains card can mean a dual land with the name Plains on it. This card can fetch you two dual lands. I got mixed up on first read between this card and Myriad Landscape. This is the one that can get you the two dual lands. 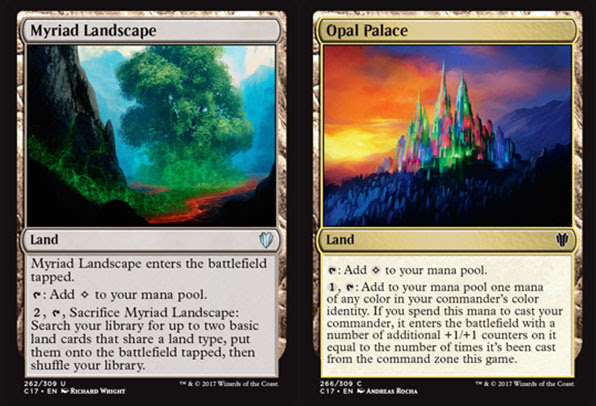 Myriad Landscape [Cat deck]: I so wanted it to read 'search for two dual lands with basic land descriptions' but I was wrong. It's solid, though, since you get to do two land drops in a turn.
Opal Palace [Cat deck]: That's pretty good. You could be missing that one color mana and can use this instead. Oh, and the counters are a nice bonus for second and later castings of your commander. 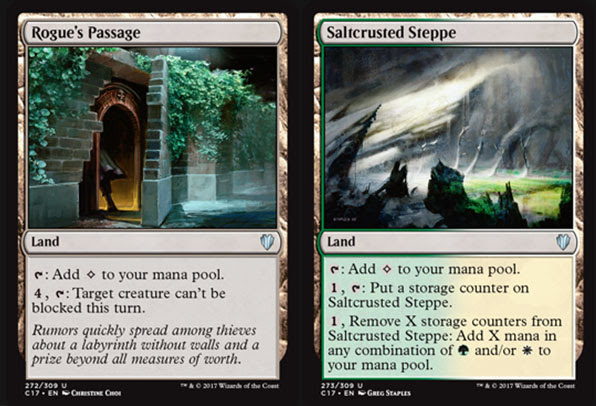