I am going to guess that most people who throw money at an attempted Reserve List buyout (because there is no such thing as a Reserve List buyout) were not around when buyouts have been attempted in older hobbies, such as stamp collecting. Many years ago-in the early 1980s; there was a buyout of the U.S. Zeppelin issue that took place within a speculative bubble in stamp collecting. 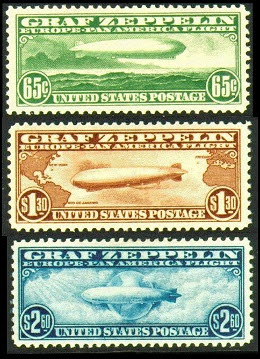 The people who participated in that attempted buyout lost big when the bubble burst for one single reason: there just weren't enough collectors who were truly interested in collecting the issue. By the way, the U.S. Zeppelin issue was printed in very small numbers, and will always be an expensive set. But, like a Legends rare, is not sought out by every stamp collector worldwide.

The part in what Rudy has explained in many videos that a buyout person does not hear is that 20,000 of something (a Legends rare) is still a very large number. Powerleech is a U3 from Antiquities, and that means approximately 92,975 [corrected, not 123,967, I made a mistake on this calculation the first time] were printed. Long term (as in twenty to thirty years long term), Alpha/Beta/Unlimited/Arabian Nights/Antiquities/Legends will be highly sought out by a small and growing community of collectors. These collectors won't care about playability, and many may have never played Magic. Even at the end of this development, which I agree with Rudy will inevitably happen, you still have a little fewer than 92,975 Powerleeches.... that's a lot of Powerleeches. There can't be more than 50,000 serious Magic collectors today; and by this I mean people who specifically and methodically collect Magic cards. As in stamp collecting, only a small percentage of that population will collect the six early sets, and that leaves you with, at most, 5,000 collectors. After each one of those collectors acquires a copy or two of Powerleech, the other 80,000+ Powerleeches are going to sit there, waiting for buyers who will enter the collecting pool decades from now. Ask yourself this question: do you want to sit on 10,000 Powerleeches and wait twenty years for the collector pool to double? If you do, you will make a little money, yet I would not be surprised that all you did was brake even or maybe incur a small loss-and you had to wait twenty years. You will have 10,000 Powerleeches, but there will be at least 60,000 Powerleeches other sellers will have...

Your choice, and your money. 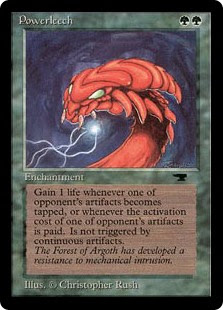