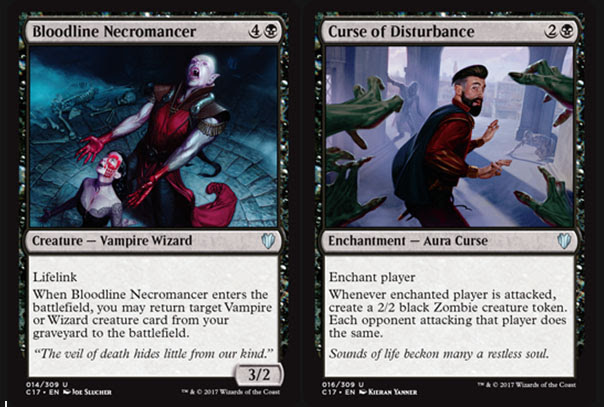 Bloodline Necromancer [Wizard deck, yet also a Vampire]: Very nice cross creature. Say you buy the Wizards deck and the Vampire deck, and you switch this creature from one of the decks to the other. I could see that being fun.
Curse of Disturbance [Wizard deck]: Hey, it's that dude! It's the same dude in all the curse cards. It would be hilarious if everyone at the table cursed the same player...hilarious to everyone but that player. I love the whole cycle, and it's a shame it is not in a standard set coming our way... a real shame. 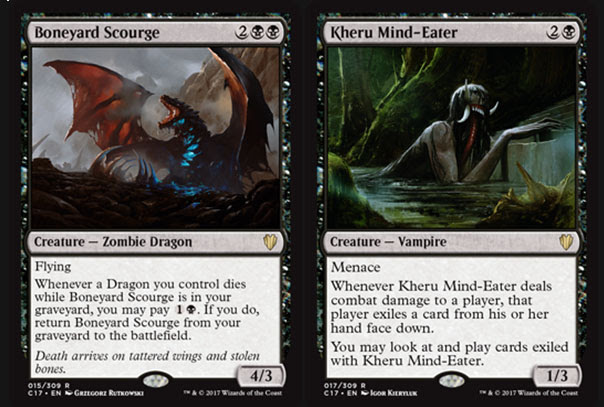 Boneyard Scourge [Dragon]: This is a new card. I like how small the mana cost is to reanimate it. This is a really strong card. Dredge would have use for it, but you need to have a dragon in play to be able to reanimate it.
Kheru Mind-Eater [Vampire]: With Menace, you stand a much better chance of dealing damage directly to an opponent. 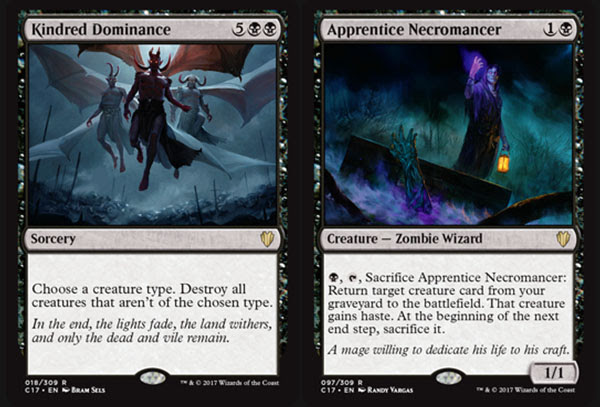 Kindred Dominance [Wizard deck]: Very useful in a tribal deck. You keep your Wizards and your opponents lose most, if not all of their creatures.
Apprentice Necromancer [Wizard deck]: Solid. It's a small cost, and the creature you reanimate from your graveyard could be big. 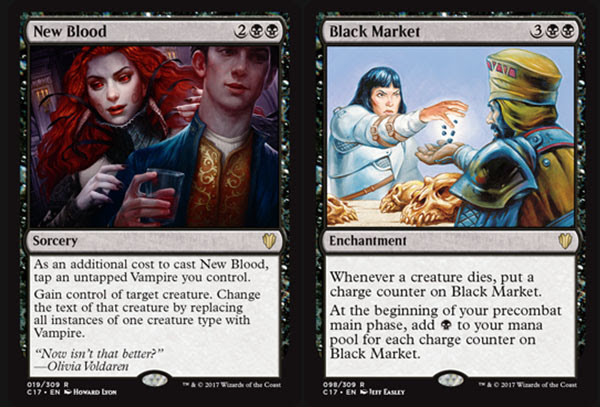 New Blood [Vampire deck]: Tap a small Vampire to gain control of a big something one of your opponents controls? I will take it.
Black Market [Vampire deck]: A money rare from Mercadian Masques, and that's great. It will decrease in cost because of this printing. I like that. 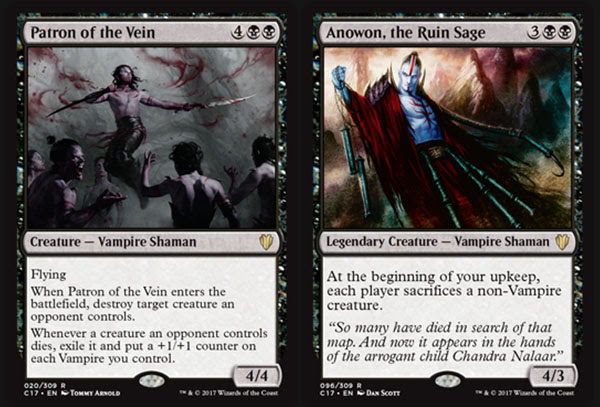 Patron of the Vein [Vampire]: This is a great play mid to late game if you have been able to keep three or four vampires on the battlefield. The counters come on anytime a creature an opponent controls dies, and that is really good. It means late game your vampires get stronger with combat barring board wipes.
Anowon, the Ruin Sage [Vampire]: Really good because when an opponent sacrifices, that's a way to take our critters with indestructible or hexproof. 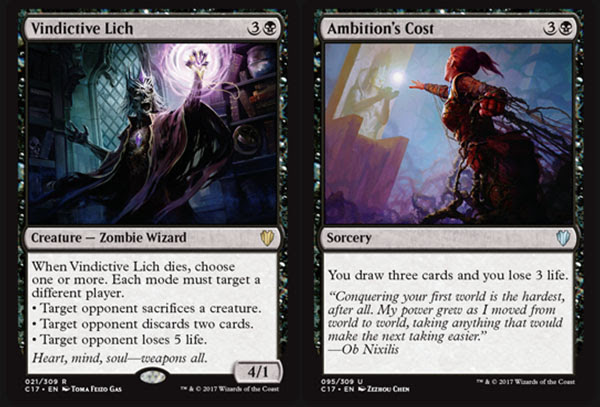 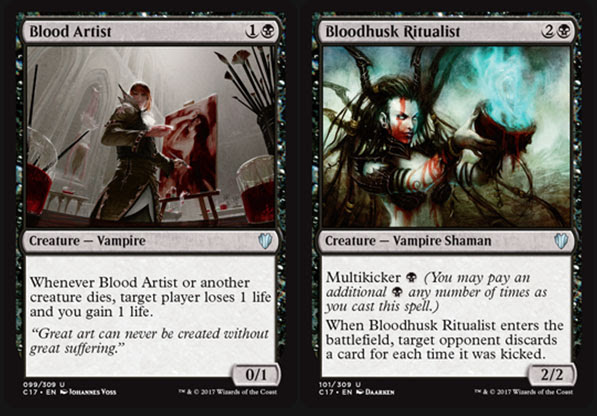 Blood Artist [Vampire]: One of my favorite creatures of all times. So many sick plays! A fantastic inclusion.
Bloodhusk Ritualist [Vampire]: Of the great Zendikar/Worldwake vampires. This can be a really powerful play. You can make your opponent discard their whole hand if you have enough swamps! 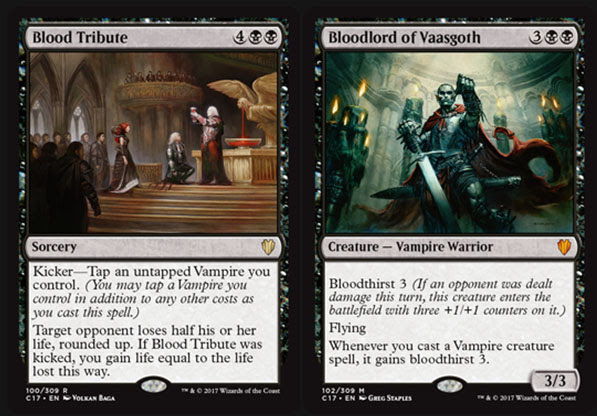 Blood Tribute [Vampire]: It requires a lot of mana, yet it can cost your opponent a lot of life, and the Kicker cost is small.
Bloodlord of Vassgoth [Vampire]: A strong mid-game play. As long as you can keep this for a couple of turns and you can draw into two or three more vampires, it should help you a lot. 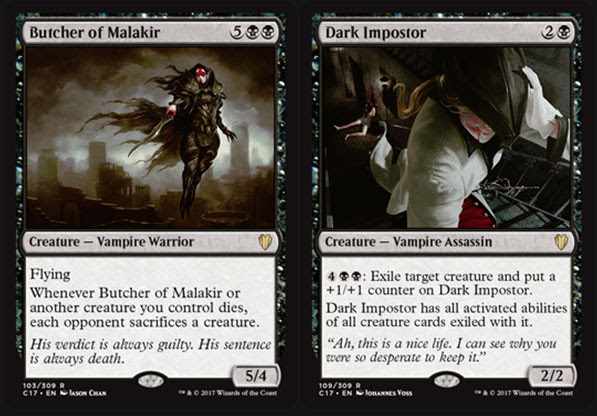 Butcher of Malakir [Vampire]: Solid. Limited to whatever sacrifice outlets you have late game.
Dark Impostor [Vampire]: Not that good when it was in standard. It should be ok, even though the exile cost is a little steep. Against Timmy/Tammy dragons, though, that exiling clause can be a game-winner. 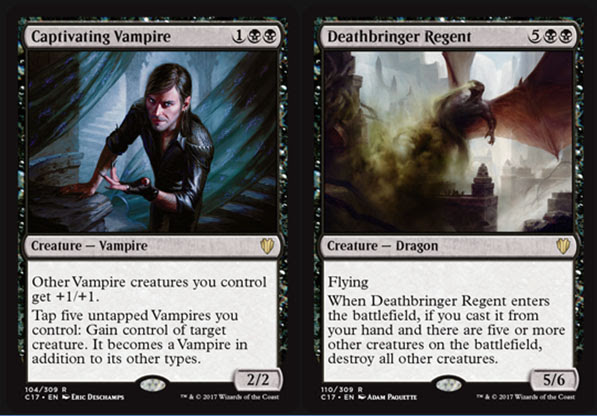 Captivating Vampire [Vampire]: Because you need a vampire lord. I don't know how easy it will be to control five vampires. I do know that the lord part is the one that really matters.
Deathbringer Regent [Dragon]: A great play in commander. The five creature clause is easy to attain with four or five people playing. 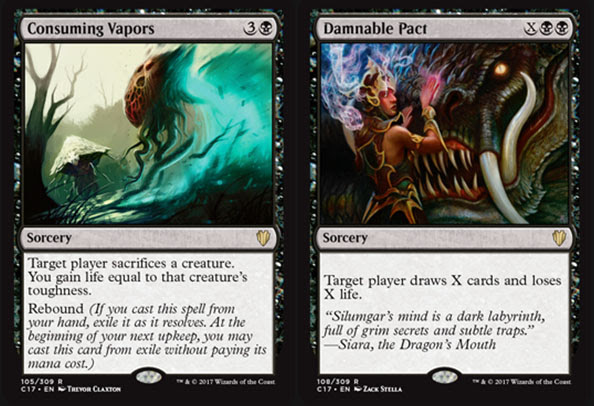 Consuming Vapors [Vampire]: Solid mid-game play. Don't forget that it has Rebound.
Damnable Pact [Vampire]: One of my favorite casual cards. You can even use it to take out the weakest opponent at the table. 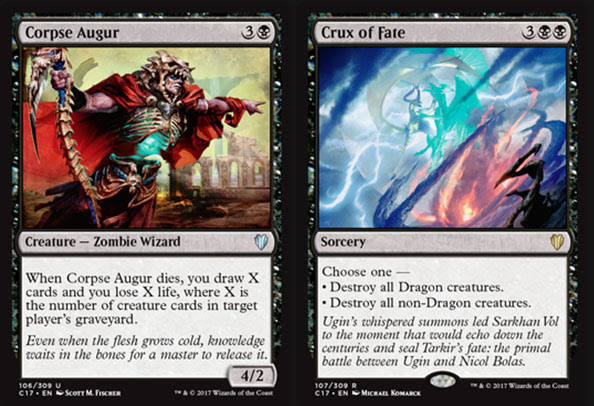 Corpse Augur [Wizard]: There has to be one player at the table who will give you X of four or five.
Crux of Fate [Dragon deck]: Perfect in the dragon deck. A board wipe that lets you keep all your dragons. 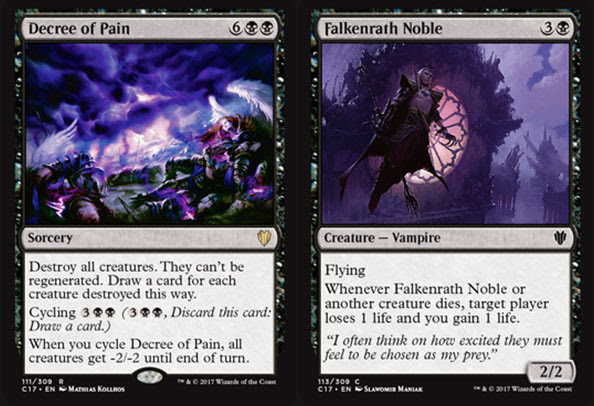 Decree of Pain [Wizard deck]: It's a little late, and the wizard deck could use some counterspells to stall gameplay, but I will take it.
Falkenrath Noble [Vampire]: This is great in multiplayer because it can a creature from one opponent and you ping some other opponent. 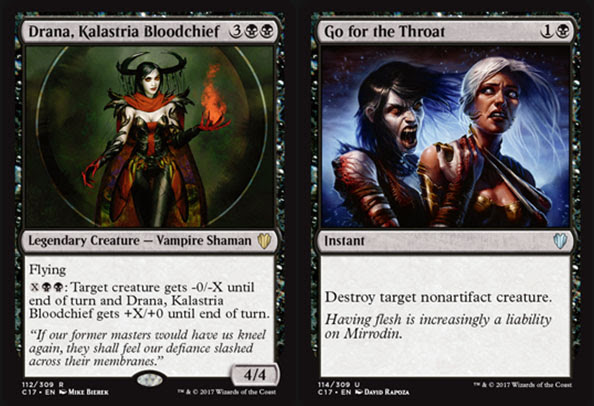 Drana, Kalastria Bloodchief [Vampire]: Solid and its a flyer.
Go for the Throat [Wizard deck]: A classic include. 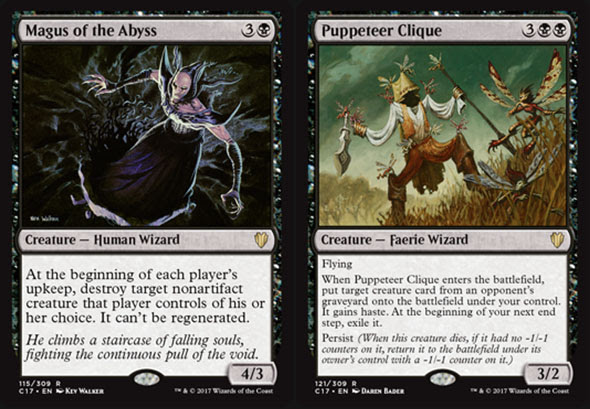 Magus of the Abyss [Wizard]: It includes you... it's a slow board wipe. That's one thinking play. I would hold off on casting any other creatures, cast this, watch all opponents winnow down to few or no creatures, kill this, and then cast whatever creatures I have been saving in my hand.
Puppeteer Clique [Wizard]: A solid play mid-game. Reanimate one of those big dragons for a swing, then do it again when Persist triggers. You can even sacrifice it yourself to make sure you reanimate a creature when you need to, and not when someone decides to take this out. 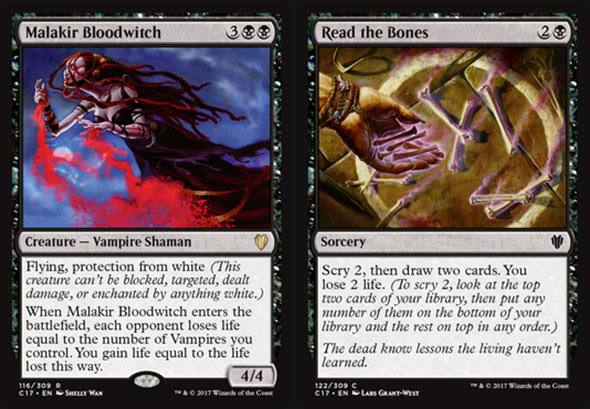 Malakir Bloodwitch [Vampire]: Even if you don't net that much from the vampire clause, it flies.
Read the Bones [Vampire deck]: Essential card draw. Old friend from Theros block. 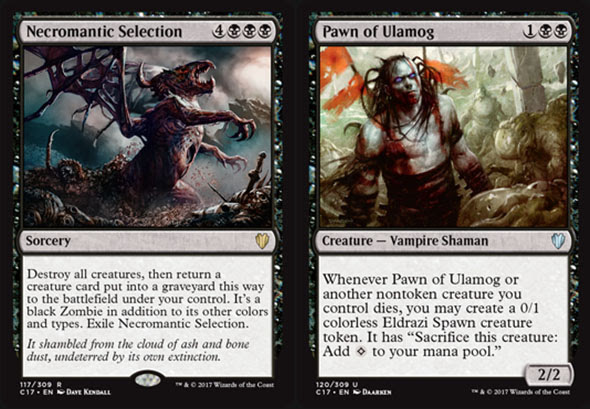 Necromantic Selection [Wizard deck]: Every deck needs a board wipe.
Pawn of Ulamog [Vampire]: It's all-right. I would have preferred a new creature very similar to it that creates a vampire token to help with the vampire count. 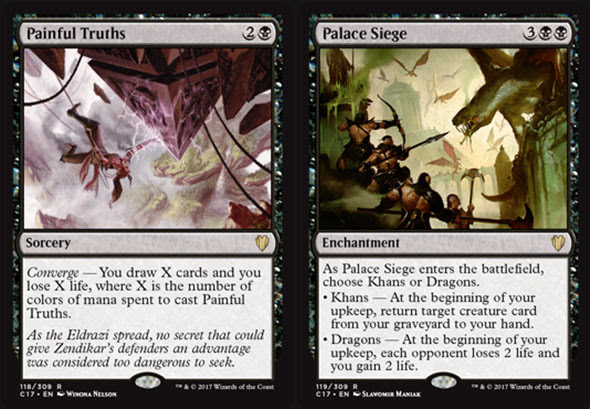 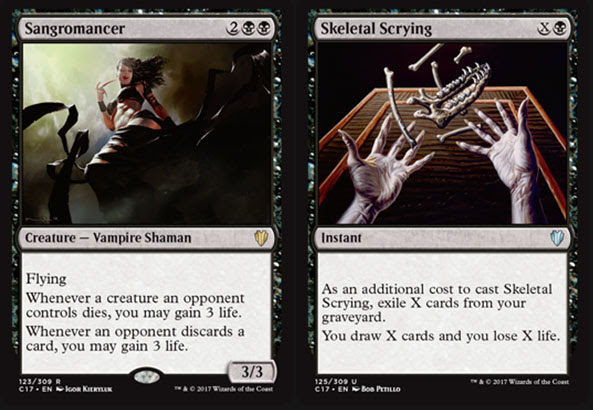 Sangromancer [Vampire]: You have ways to cause discard in this deck.
Skeletal Scrying [Vampire]: Great include from Odyssey and Conspiracy. Late game this can lead to massive draw. 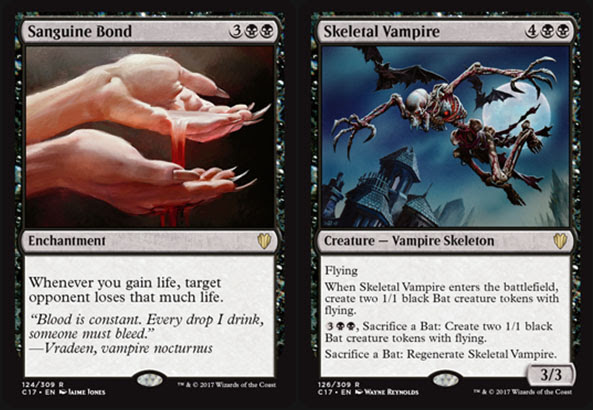 Sanguine Bond [Vampire deck]: The other half of Exquisite Blood from Avacyn Restored {Whenever an opponent loses life, you gain that much life).
Skeletal Vampire [Vampire]: Cool token maker. Would have been bonkers if it instead made vampire tokens. 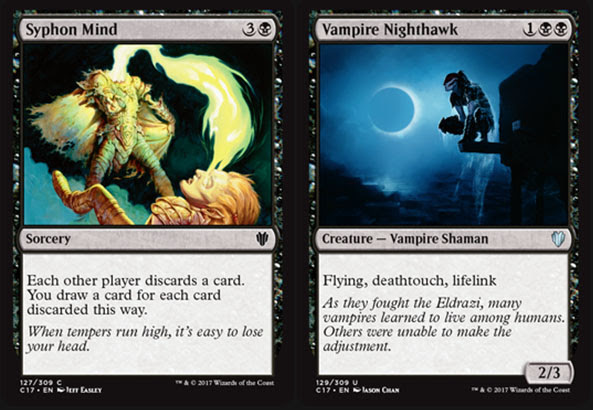 Syphon Mind [Vampire deck]: It can be switched into any commander deck playing black. It's a versatile card in multiplayer.
Vampire Nighthawk [Vampire]: It has been reprinted a zillion times, and it deserves to be reprinted an additional zillion times. One of the best vampires in the game, period. 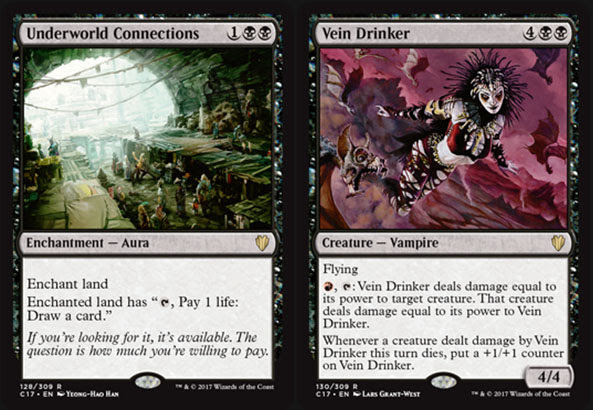 Underworld Connections [Vampire deck]: I simply love this card. It could very well be what makes me want to buy the vampire deck over all others even if I know it is a cheap card and I pulled a bunch when it was in standard. It's so much fun to play this card.
Vein Drinker [Vampire]: From Shards of Alara. The reverse clause is there as a limitation to make sure this card is not abused. This means you can consistently take out anything with power of three or less, and that's great. Oh, and it flies. The counter clause is awesome: you can progressively take out bigger and bigger creatures.
Posted by Rubiera