Go back to Part 2 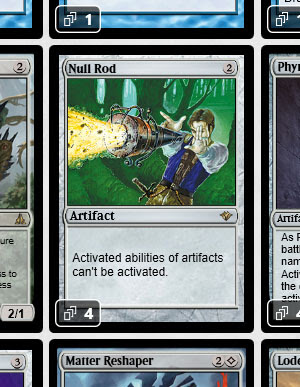 Drawing any shutdown artifacts in my opening hand is not good, but I will keep the hand because I drew great otherwise.

I have enough mana for an early Precursor Golem. 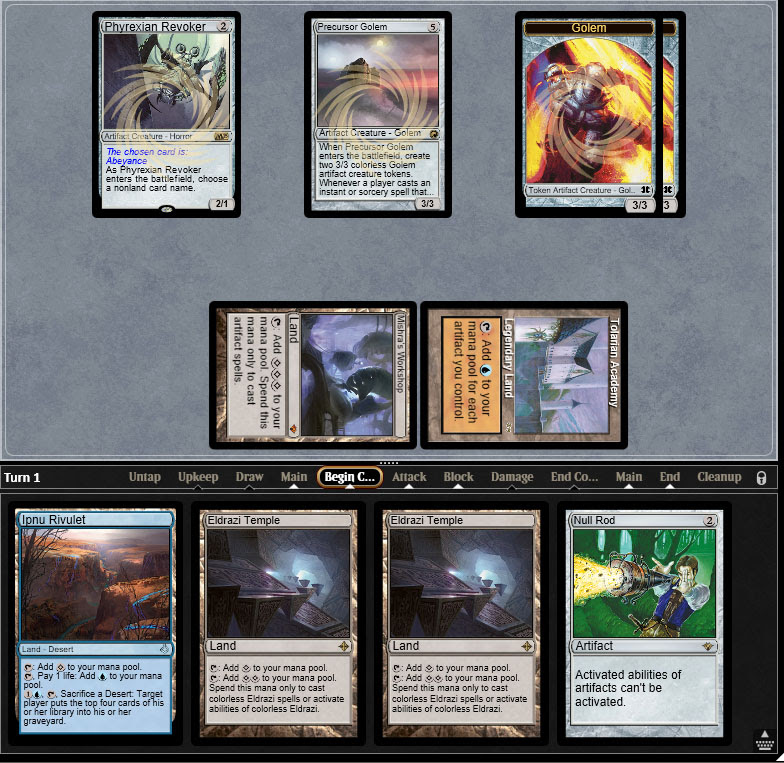 And then I can bring out Null Rod.

Here is a not-so-good hand. I have Library of Alexandria and that's it. Also, Phyrexian Metamorph does nothing for me early game. Time to mulligan.

This hand is not that much better.

A Moxen is a Moxen, and I put this one on top of my library.

This is a weak board position in which to cast two Sphere of Resistance. These could end up hurting me more than they hurt my opponent in a real game. 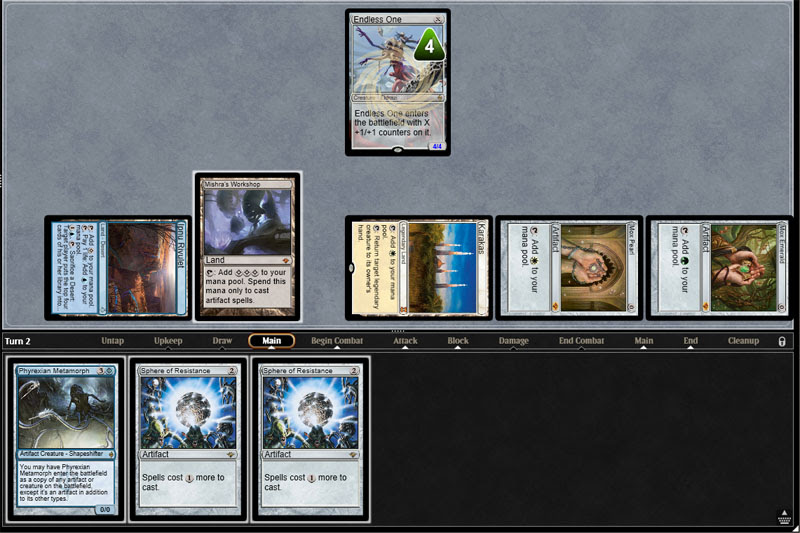 Yeah, it's time to make a change. I need more muscle. 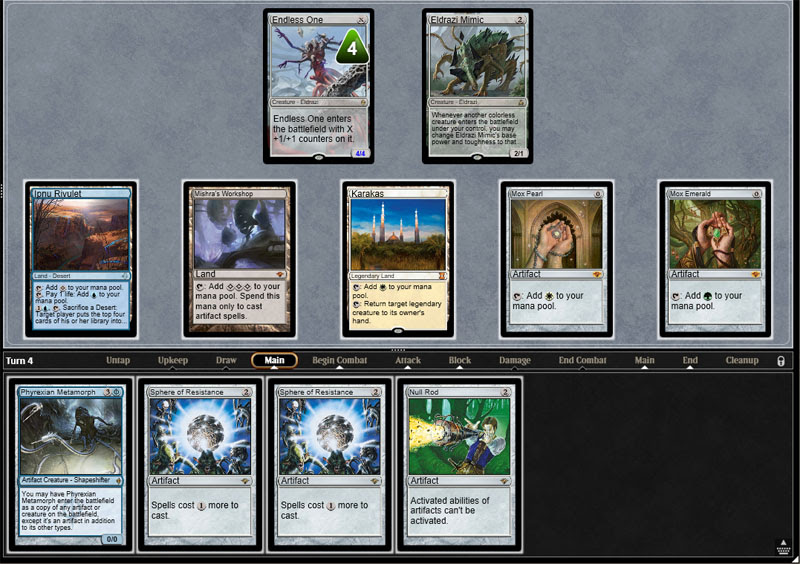 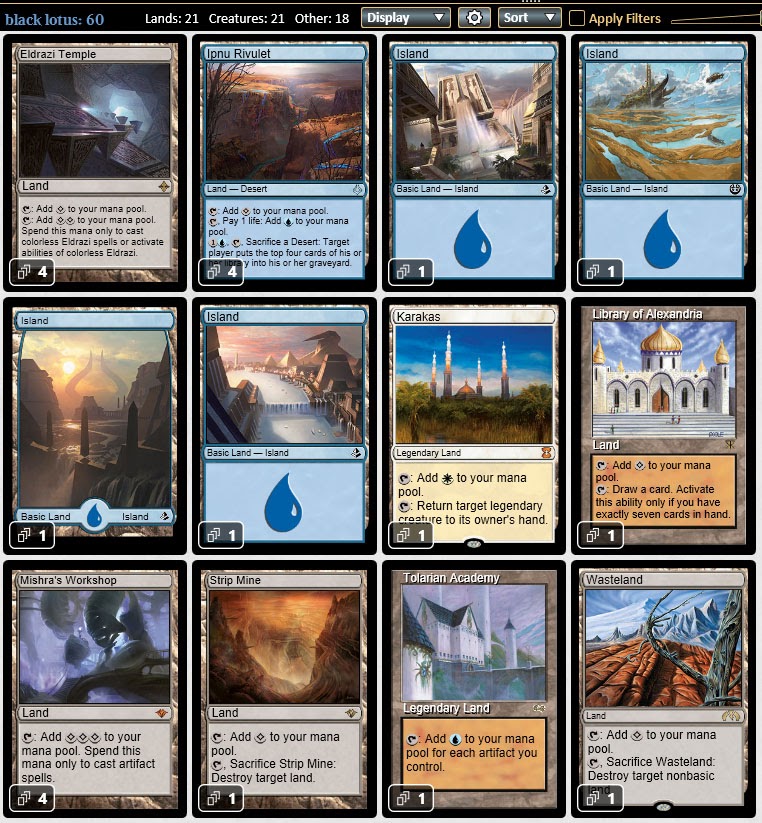 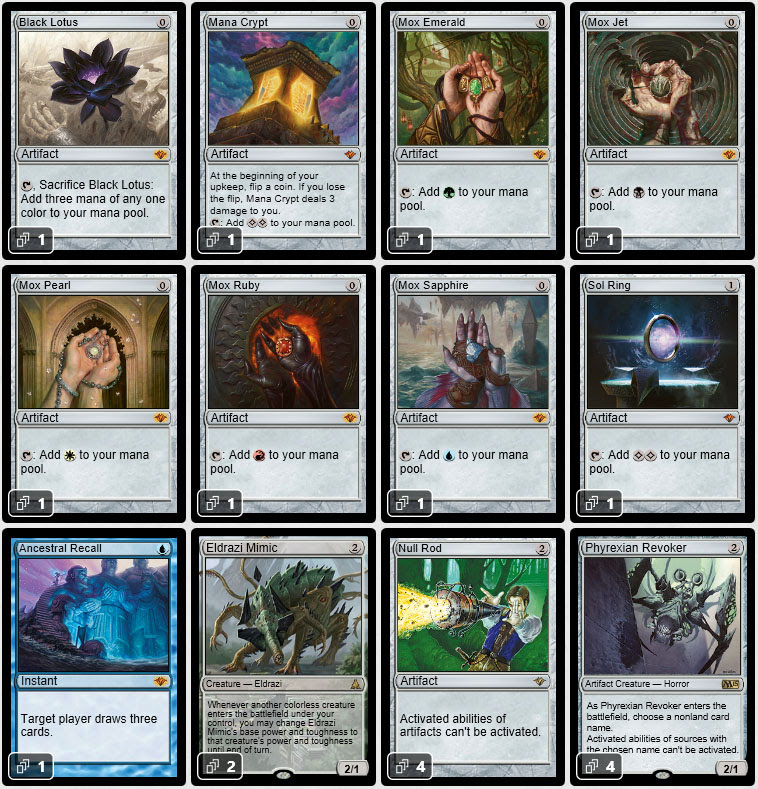 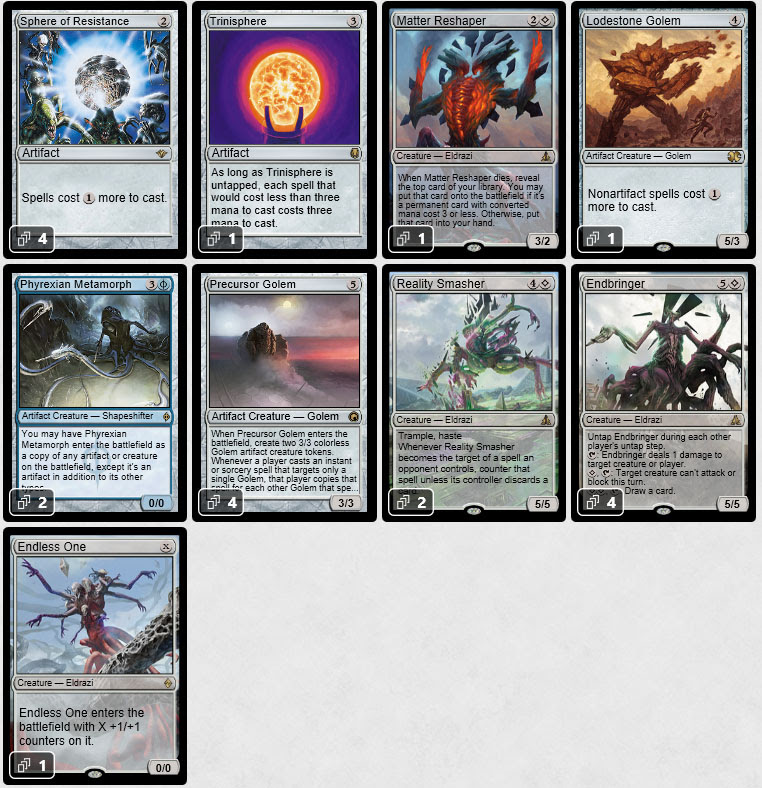 Here is a solid first hand.

I cast an early Precursor Golem. 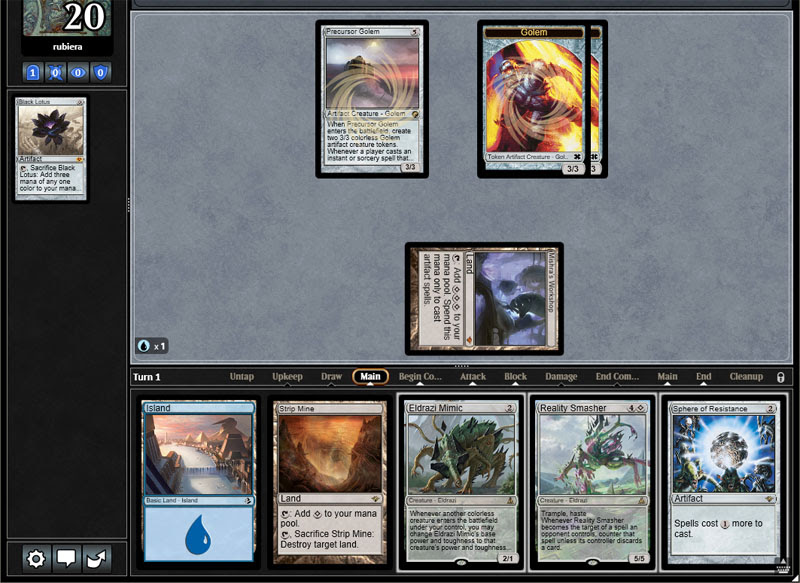 I have Eldrazi Mimic in this deck just to see how it plays with these other cards, but once Thought-Knot Seer is added to this deck, Eldrazi Mimic is going out. It's a nice trick to boost it when you cast, for instance, a Reality Smasher, but Eldrazi Mimic does not belong in this deck and it belongs in the all-in Eldrazi Legacy deck. 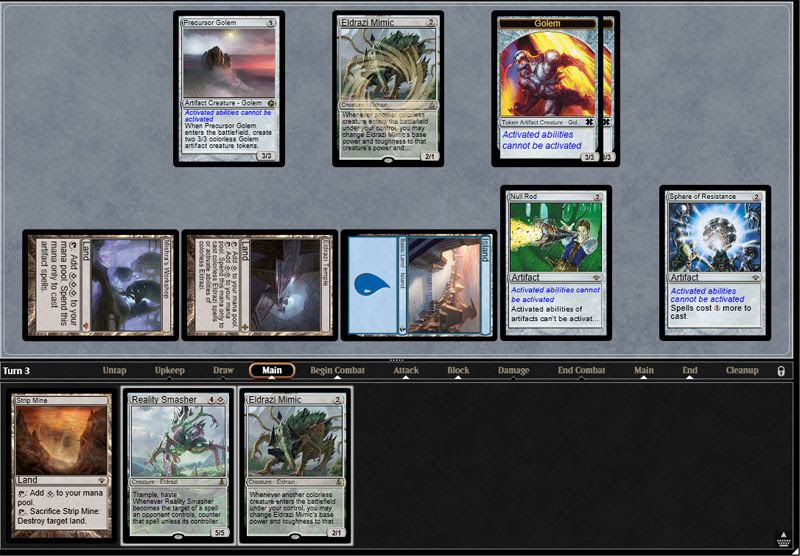 Here, I decide not to add any more Eldrazi to the board since I am somewhat mana-screwed. 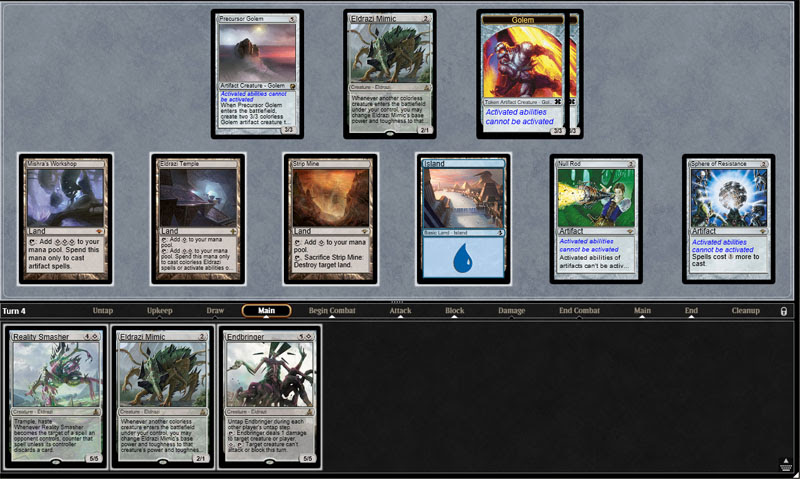 I decide to bring in Eye of Ugin, thinking it would help me cast my Eldrazi.

Here is a turn one hand.

A turn later I am able to cast a Precursor Golem, which is the workhorse of the deck. 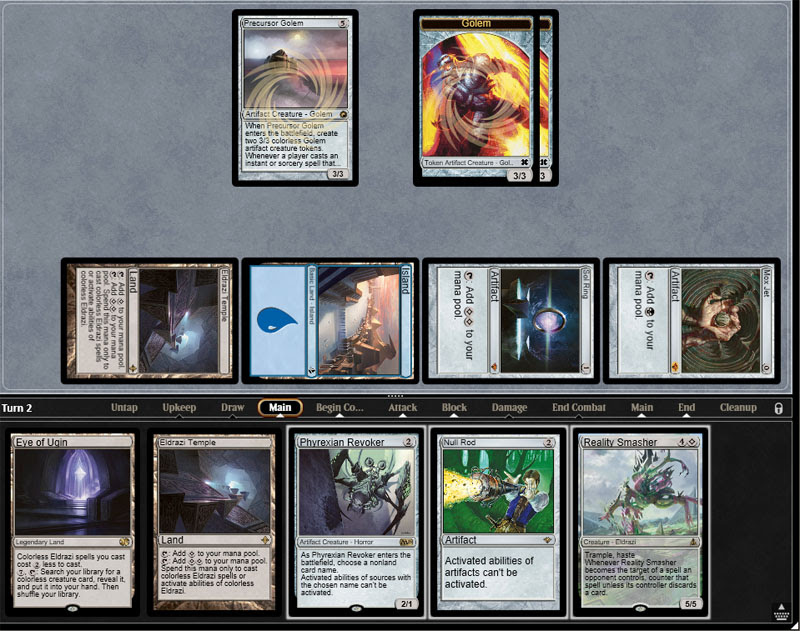 Here is a solid battlefield position with this deck. 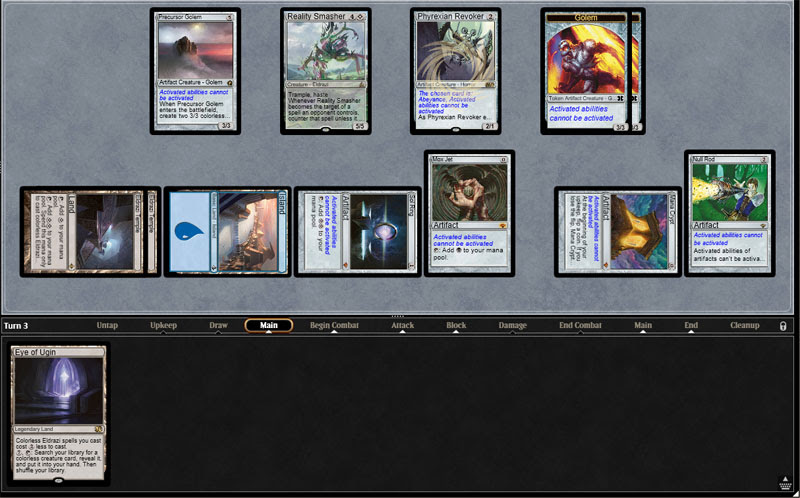 Casting Eye of Ugin here does nothing for me since I have already shutdown my own artifacts.

I draw a hand that I need to mulligan..

And then I draw an Eye of Ugin, and I get that feeling I get when I realize a card does not belong in a deck.

Yeah, I proved to myself why Eye of Ugin does not belong in this deck: it's for all-in Eldrazi and no other deck, and the tutoring cost is absurd unless you have a deck, like all-in Eldrazi, which is built to generate ridiculous mana in the late game.

Go to Part 4
Posted by Rubiera