Go back to Part 1

I added some cantrips. 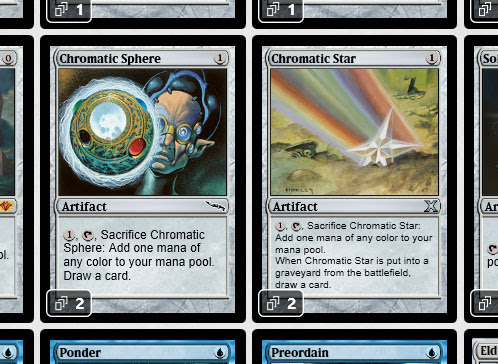 Here is a first hand. 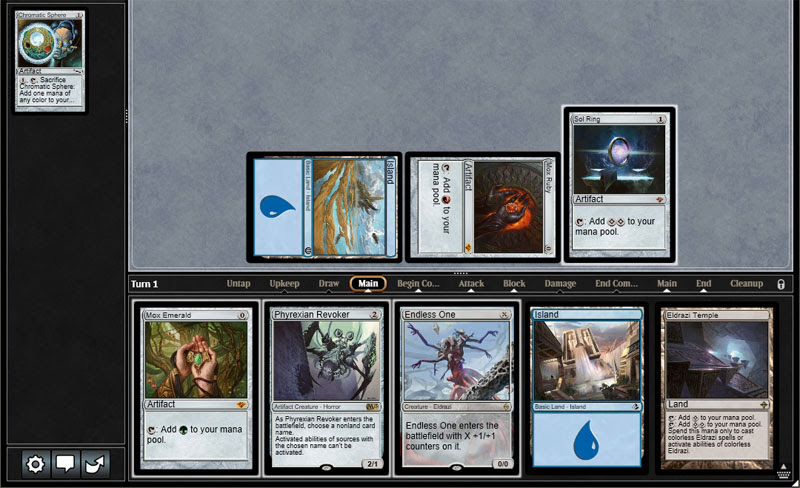 I am able to cast an X=7 Endless One. 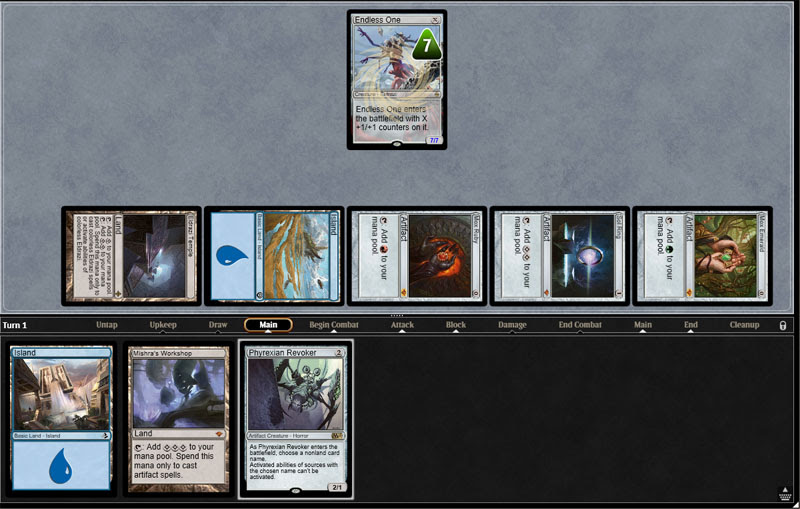 In the next turn I am able to cast a Reality Smasher. 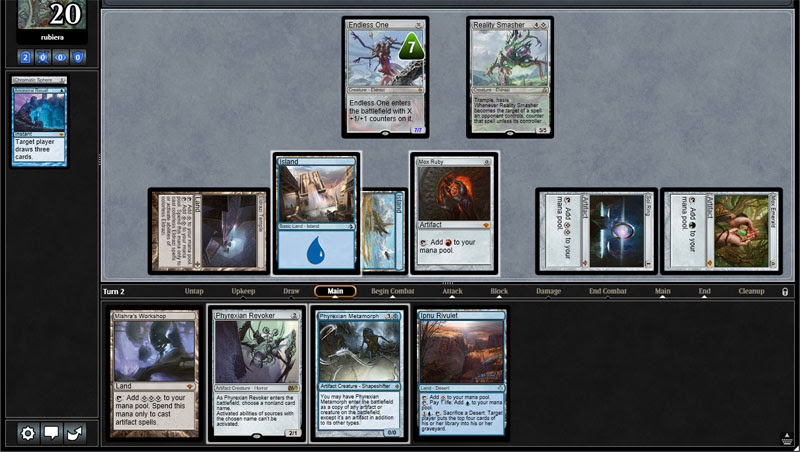 And I then create a second Reality Smasher using Phyrexian Metamorph. 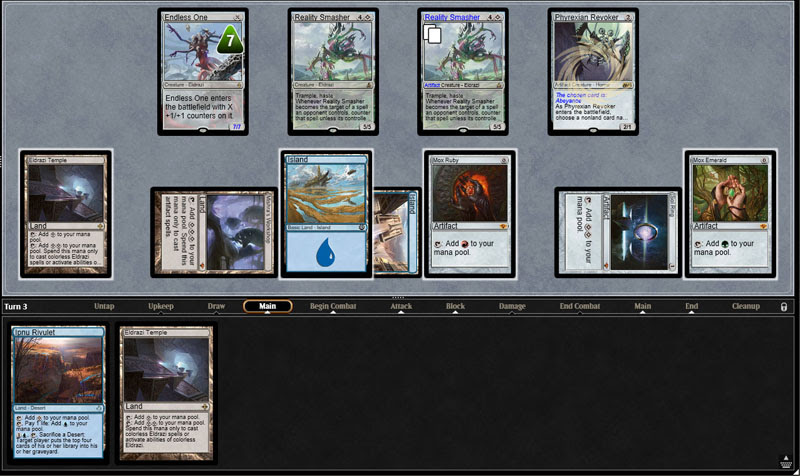 Here is another opening hand. Any opening hand with a Black Lotus has to be considered likely to be a very good hand. I am sure that there are exceptions.

I sac Black Lotus and use Mishra's Worshop to have six mana to cast Precursor Golem with one mana to spare. 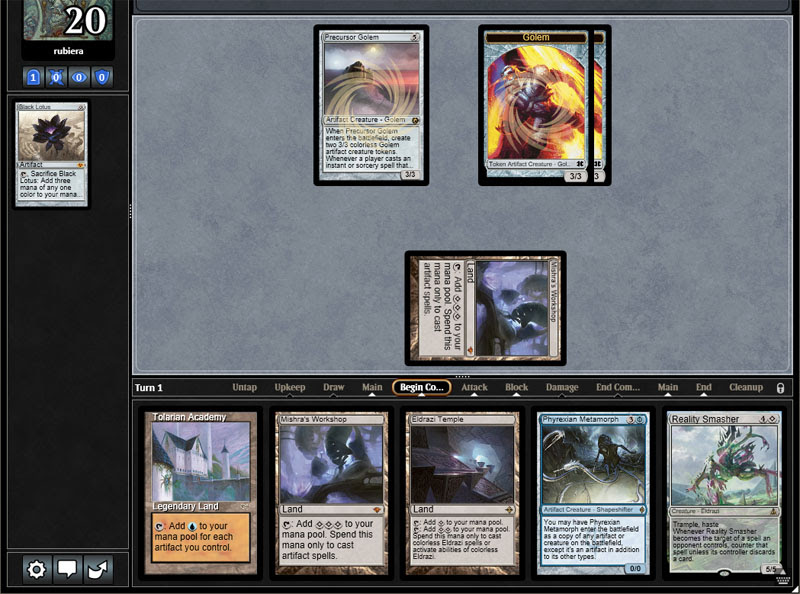 I then filter with Ponder.

I crate a second copy of Precursor Golem with Phyrexian Metamorph. This is a really good play because it significantly increases the number of artifacts on the field for when I have Tolarian Academy in play, such as below. 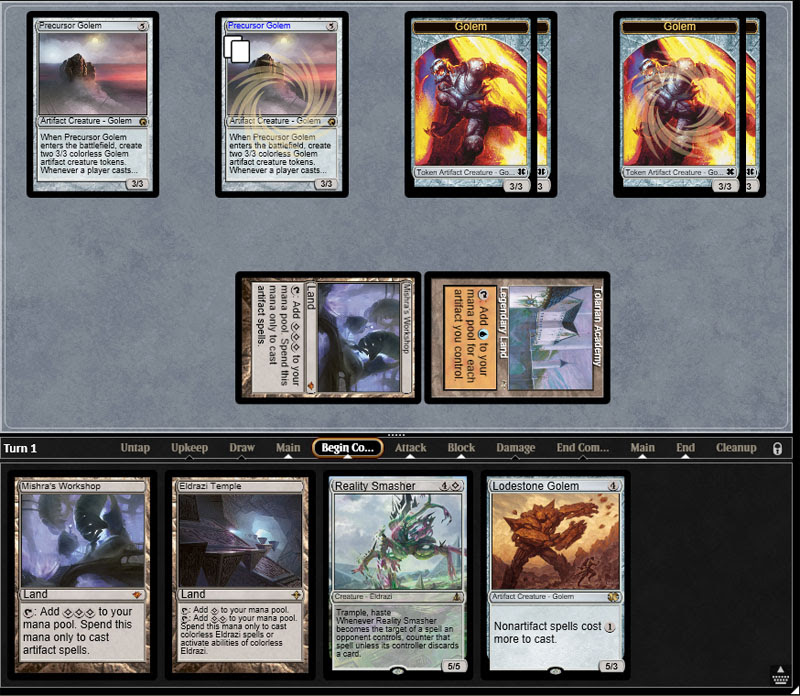 After casting Reality Smasher I am done with this Solitaire game. 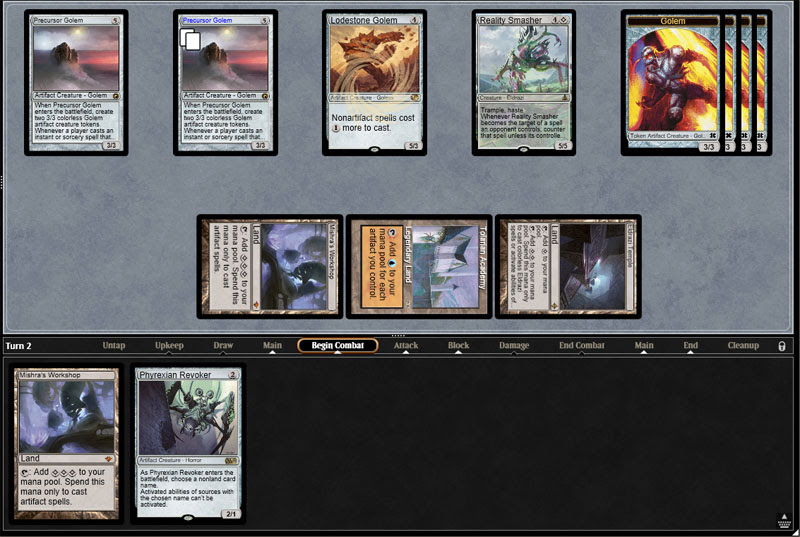 Here is the opening hand for another game. Because of the divided mana issue, a good hand either has Mishra's Workshop and one of the heavier artifact creatures; Eldrazi Temple and one of the bigger Eldrazi, or all four. Any of the shutdown artifacts in the opening hand or first few draws is a dead draw because they also shut the deck down. The shutdown artifacts need to be used only after the deck has a really strong field position with artifact creatures and/or Eldrazi.

Casting Precursor Golem gives me a high artifact count to have lots of mana out of Tolarian Academy. I can cast a second Precursor Golem. 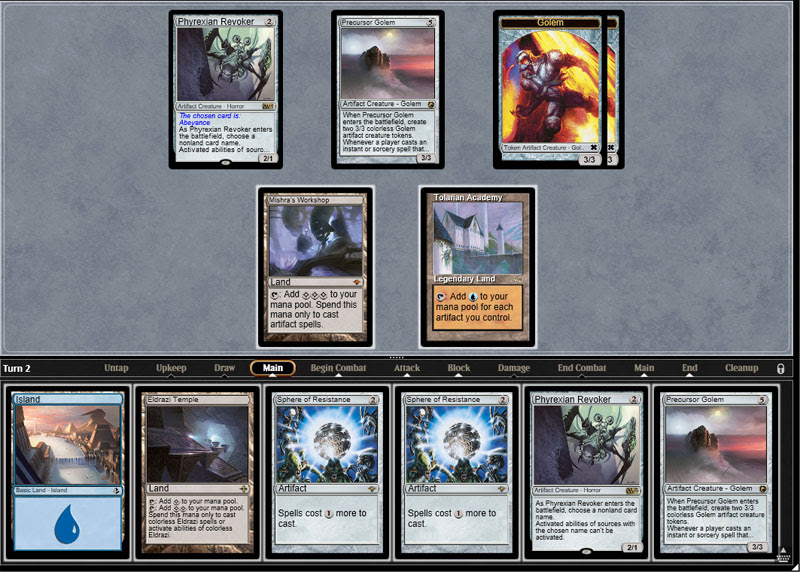 And then I can cast any of my shutdown plays. Phyrexian Revoker does nothing in Solitaire but I want it in the deck because it will be in the final deck that could someday be used against a real-life player online. 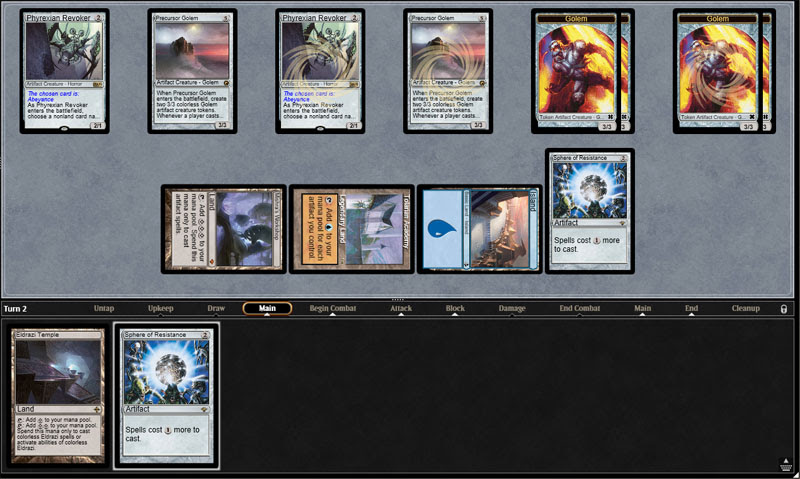 Here is another opening hand. 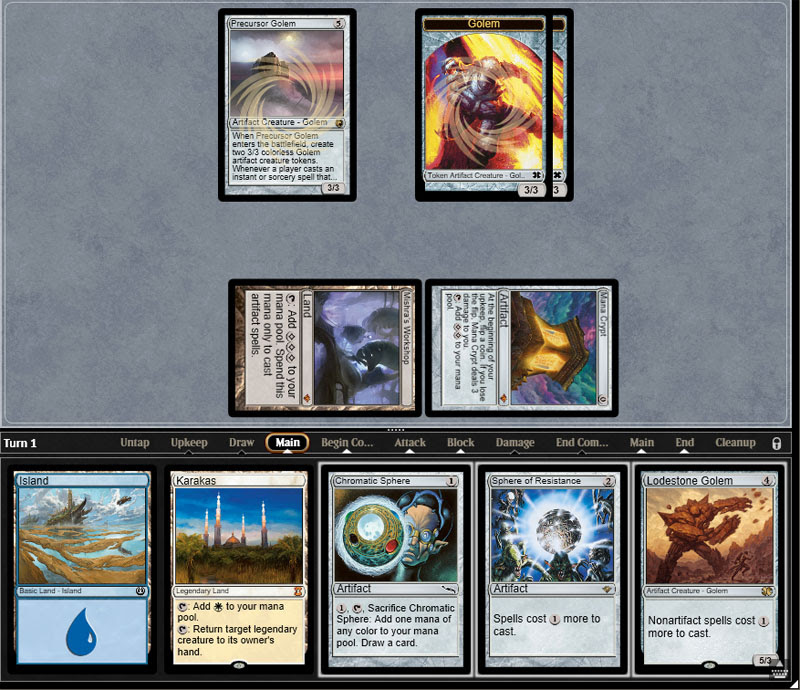 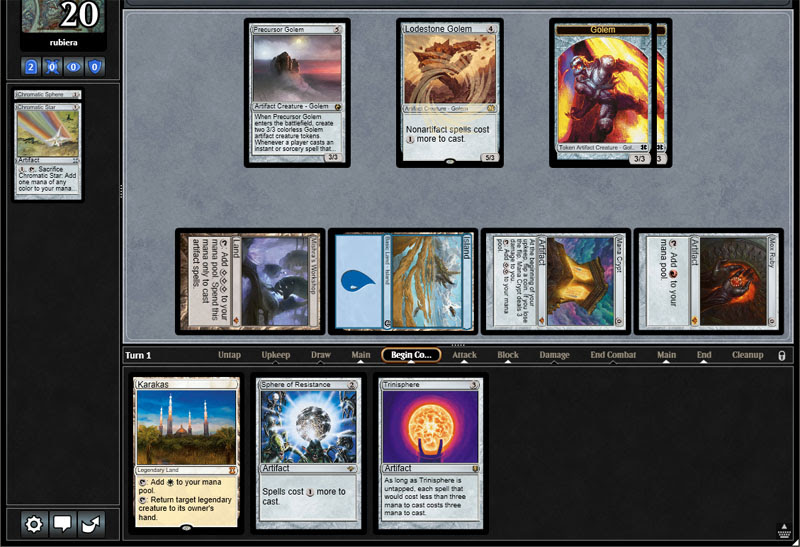 I then cast the shutdown artifacts. These have to be cast in the right order, and I kept casting them in the wrong order. Null Rod shuts down your own Moxen, but does not slow down the other shutdown artifacts. I cast have learned to cast it first, and to exhaust mana from my artifacts with activated abilities since one I cast Null Rod, I can no longer use them to generate mana. I then cast Sphere of Resistance, which will make me cast Trinisphere for four. You can also cast Trinisphere and then cast Sphere of Resistance for three mana. Once any number of these are in place, it will be harded on your opponent but also harder on you, and you therefore need to make sure you have a solid field position before you bring down shutdown artifacts. 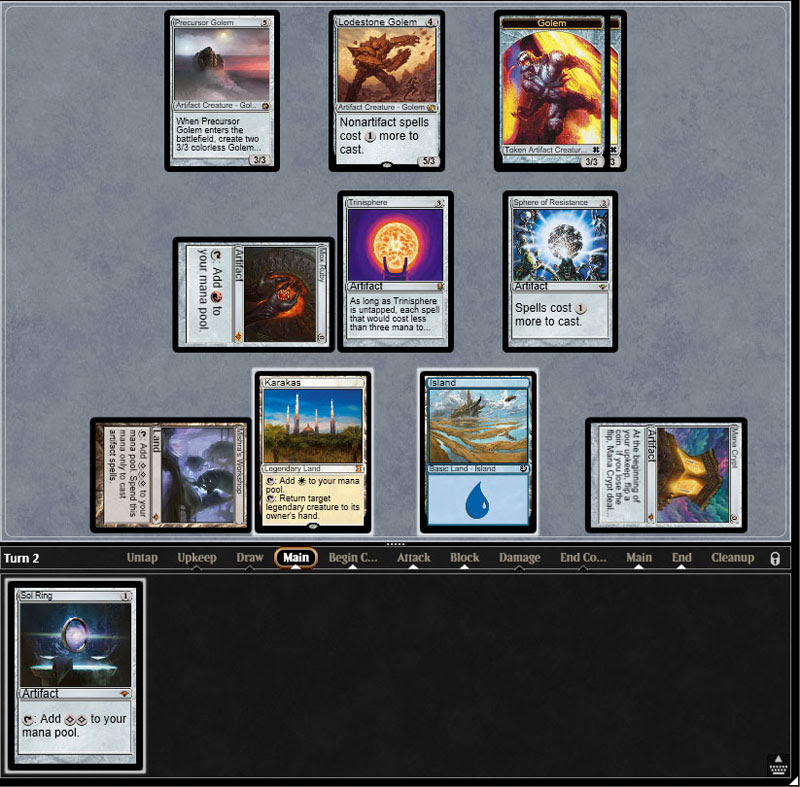 Go to Part 3
Posted by Rubiera